In Mathematics, the LCM of any two is the value that is evenly divisible by the two given numbers. The full form of LCM is Least Common Multiple. It is also called the Least Common Divisor (LCD). For example, LCM (4, 5) = 20. Here, the LCM 20 is divisible by both 4 and 5 such that 4 and 5 are called the divisors of 20.

LCM is also used to add or subtract any two fractions when the denominators of the fractions are different. While performing any arithmetic operations such as addition, subtraction with fractions, LCM is used to make the denominators common. This process makes the simplification process easier.

We can see that the first common multiple for both numbers is 80. This proves the method of LCM as correct.

For example, the H.C.F. of 2,6,8 is 2, because all the three numbers can be divided with the factor 2, commonly. H.C.F. and L.C.M. both have equal importance in Maths.

How to Find LCM?

A multiple is a value we get when we multiply a number with another number. Like 4 is a multiple of 2, as we multiply 2 with 2, we get 4. Similarly, in the case of the maths table, you can see the multiples of a number when we multiply them from 1, 2, 3, 4, 5, 6 and so on but not with zero.

Let a and b are two given integers. The formula to find the LCM of a & b is given by:

Where GCD (a,b) means Greatest Common Divisor or Highest Common Factor of a & b.

The formula to find the LCM of fractions is given by:

There are three important methods by which we can find the LCM of two or more numbers. They are:

Now writing the prime factors of all the three numbers together, we get;

Let us understand with the help of examples.

Solution: Let us draw a table to divide the numbers by prime factors.

Let us write multiples of 4 and 6 first,

From the above two expressions you can see, 4 and 6 have common multiples as 12 and 24. They may have more common multiple if we go beyond. Now, the smallest or least common multiple for 4 and 6 is 12. Therefore, 12 is the LCM of 4 and 6. Also, learn to find LCM of two numbers here.

Now, let us take an example of 3 numbers.

Solution: First write the common multiples of all three numbers.

From the above-given multiples of 4, 6 and 12, you can see, 12 is the smallest common multiple.

Now let us represent the above prime factorization using a tree.

From the above tree diagram, we can take the pair of common factors and unique factors from the branches of both the numbers and multiply them as a whole to get the LCM. Therefore,

Relation Between LCM and HCF

Where a and b are the two numbers.

We know, for given two integers a and b,

Solution: As we know,

Example 3: What is the smallest number when divided by the digits 5, 7, 9 and 12 gives the same remainder of 3 in every case?

To find the least common multiple of the divisors and add the remainder.

Example 5: The traffic policemen at 3 varied positions on the ground blow a whistle succeeding every 42 seconds, 60 seconds and 78 seconds respectively. If all of them blow at the same time at 9:30 hours, find the time interval at which they whistle again together.

The time interval at which they whistle again together = least common multiple of the separate whistleblowing pattern.

The policemen will blow the whistle again at the same time interval after 5460 seconds.

On conversion into hours and minutes, it is 1 hour 31 minutes.

The given number is divisible by the number 9 when the total of its digits is a multiple of number 9.

The required number is 171.

Example 7: 2 digits are in the ratio 2:3. The product of the least common multiple and highest common factors is 294, what are the numbers?

Assume the ratio that is common to be m. 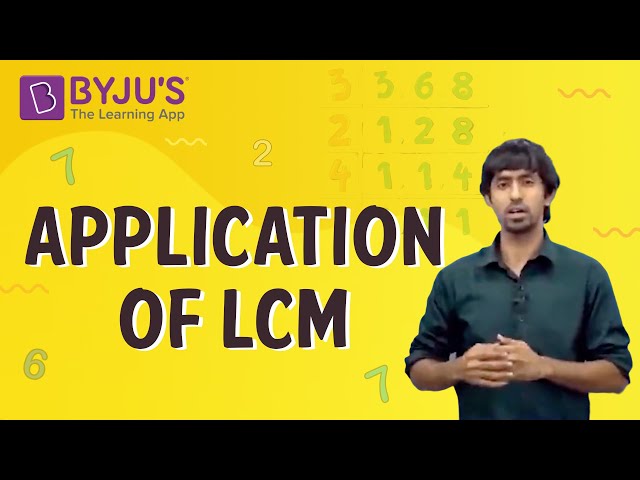 Download BYJU’S- The Learning App and have fun learning with us with the help of interactive videos.

What is LCM? Give an example.

How to find LCM of numbers?

There are three major methods to find the LCM of numbers, such as: Listing the multiples of the given numbers, prime factorisation of numbers and by division method.

What is the relation between HCF and LCM?

LCM and HCF are related by the formula:
LCM (a,b) = axb/HCF(a,b)
Where a and b are two different numbers

Least common multiple of 4 and 5 is 20.
Test your knowledge on LCM
Q5