Bernoulli Trials and Binomial Distribution are explained here in a brief manner.  Bernoulli’s trial is also said to be a binomial trial. In the case of the Bernoulli trial, there are only two possible outcomes. But, in the case of the binomial distribution, we get the number of successes in a sequence of independent experiments. Both the topics are described under probability and statistics, in Mathematics. 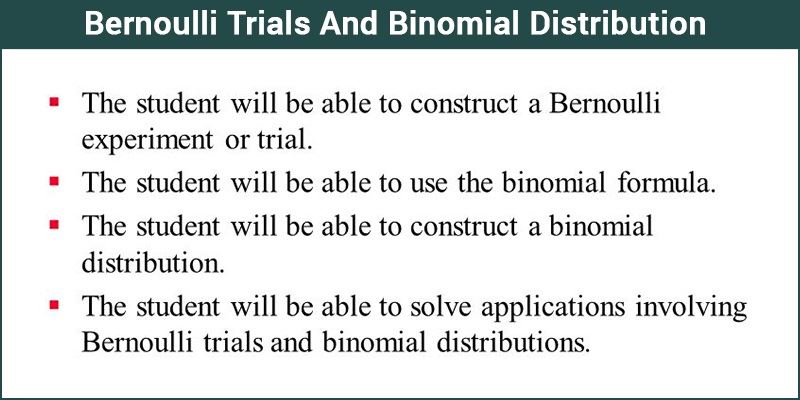 Eight balls are drawn from a bag containing 10 white and 10 black balls. Predict whether the trials are Bernoulli trials if the ball drawn is replaced and not replaced.

(a) For the first case, when a ball is drawn with replacement, the probability of success (say, white ball) is p=10/20=1/2, which is the same for all eight trials (draws). Hence, the trial involving the drawing of balls with replacements are said to be Bernoulli trials.

Consider three Bernoulli trials for tossing a coin. Let obtaining head, stand for success, S and tails for failure, F. There are three ways in which we can have one success in three trials {SFF, FSF, FFS}. Similarly, two successes and one failure will have three ways. The general formula can be seen as nCr. Where ‘n’ stands for the number of trials and ‘r’ stands for the number of successes or failures.

The number of successes for the above cases can take four values 0,1,2,3.

The probability distribution is given as:

We can relate it with binomial expansion of (a + b)3 for determining the probability of 0,1,2,3 successes.

For n trials, the number of ways for x successes, S and (n-x) failures, F can be given as:

In each way, the probability of  x success and (n-x) failures:

Thus the probability of x successes in n-Bernoulli trials:

Probability distribution for above can be given as,

If a fair coin is tossed 8 times, find the probability of:

(a) The repeated tossing of the coin is an example of a Bernoulli trial. According to the problem:

(b) For at least five heads,

Download BYJU’S app and get personalised videos to understand the mathematical concepts, with a new method of learning.