Statistics deals with the study of analysis, presentation, interpretation, organisation and collection of data. A basic procedure for statistics includes the test of the relationship between synthetic data and statistical data drawn from an idealized model. There are several methods of representing a set of data through polygons, bar graphs, pie-charts, frequency, graphs, pictorial representation of histograms, tables etc.

After the data is organized and represented in a suitable form, the data is used for analysis. Measures of central tendency are used for analysing the data and to obtain symbolic results from obtained data. With the help of measures of central tendency, arbitrary of vast organization of data can be made. The entire data will be briefed into one particular value that represents the aspects of the complete organized data.

They are several specifications that are used as measures of central tendency namely mean, median and mode. Let us discuss in brief about the importance of the median of data.

How to Find the Median of Data

When the set of data has an odd number of observations then;

When the set of data has even number of observations then the median is;

Let us look into an example to understand the concept of median properly.

Example: The below table illustrates the scores obtained by each player in a match. Calculate median of the given data? 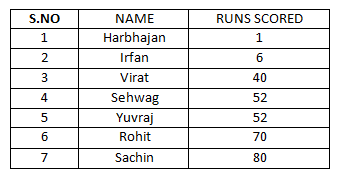 Since the number of observations in the data is odd the median is ((n+1)/2)th observation. To know more about measures of central tendency and median of data please download BYJU’S -The Learning App.