CBSE Class 10 Maths Chapter 15 Probability Notes are provided here in detail. In this article, we are going to learn the definition of probability, experimental probability, theoretical probability and the different terminologies used in probability with complete explanation.

The branch of mathematics that measures the uncertainty of the occurrence of an event using numbers is called probability. The chance that an event will or will not occur is expressed on a scale ranging from 0-1.
It can also be represented as a percentage, where 0% denotes an impossible event and 100 % implies a certain event.
Probability of an Event E is represented by P(E).
For example, probability of getting a head when a coin is tossed is equal to 1/2. Similarly, probability of getting a tail when a coin is tossed is also equal to 1/2.
Hence, the total probability will be:
P(E) = 1/2 + 1/2 = 1
Know more about probability by clicking here.

An Outcome is a result of a random experiment. For example, when we roll a dice getting six is an outcome.
An Event is a set of outcomes. For example when we roll dice the probability of getting a number less than five is an event.
Note: An Event can have a single outcome.

To know more about Types of Events, visit here.

Theoretical Probability, P(E) = Number of Outcomes Favourable to E / Number of all possible outcomes of the experiment

Here we assume that the outcomes of the experiment are equally likely.
Example: Find the probability of picking up a red ball from a basket that contains 5 red and 7 blue balls.
Solution: Number of possible outcomes = Total number of balls = 5+7 = 12
Number of favorable outcomes = Number of red balls = 5
Hence,
Probability, P(red) = 5/12 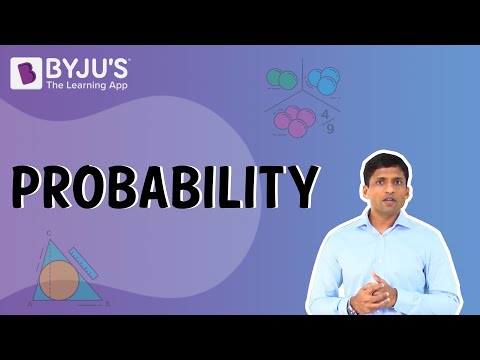 The sum of the probabilities of all the elementary events of an experiment is one.
Example: take the coin-tossing experiment. P(Heads) + P(Tails )

An event that has no chance of occurring is called an Impossible event, i.e. P(E) = 0.
E.g: Probability of getting a 7 on a roll of a die is 0. As 7 can never be an outcome of this trial.

Range of Probability of an event

Probability can range between 0 and 1, where 0 probability means the event to be an impossible one and probability of 1 indicates a certain event i.e. 0 ≤P (E) ≤ 1.

Geometric probability is the calculation of the likelihood that one will hit a particular area of a figure. It is calculated by dividing the desired area by the total area. In the case of Geometrical probability, there are infinite outcomes. 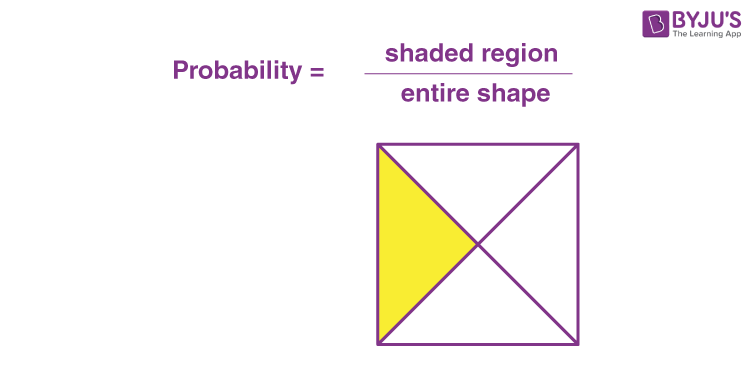 Complementary events are two outcomes of an event that are the only two possible outcomes. This is like flipping a coin and getting heads or tails.

A bag contains only lemon-flavoured candies. Arjun takes out one candy without looking into the bag. What is the probability that he takes out an orange-flavoured candy?

Let us take the number of candies in the bag to be 100.

Hence, the probability that he takes out an orange-flavoured candy is:

Hence, the probability that Arjun takes out an orange-flavoured candy is 0.

This proves that the probability of an impossible event is 0.

A game of chance consists of spinning an arrow that comes to rest pointing at any one of the numbers such as 1, 2, 3, 4, 5, 6, 7, 8 and these are equally likely outcomes. What is the probability that it will point at (i)8, (ii) Number greater than 2 (iii) Odd numbers.

(i) Probability that the arrow will point at 8:

(ii) Probability that the arrow will point at the number greater than 2:

(iii) Probability that the arrow will point at the odd numbers:

Stay tuned with BYJU’S – The Learning App and download the app to learn all Maths-related concepts easily by exploring more videos.