In conic Sections Class 11, we will study about different kinds of curves like circles, ellipse, hyperbola and parabolas. The curves are known as conic sections or conics. Because the curves are obtained from the intersection of a plane with a double-napped right circular cone. These curves have a wide range of applications in various fields like automobile headlights, designing of antennas and telescope, reflectors etc. In conic sections, class 11 chapter 11 concepts help to understand the different sections of a cone when it is rotated.

The topics and subtopics covered in conic sections class 11 are:

When a plane cuts the cone other than the vertex, we have the following situations:

Where β is the angle made by the plane with the vertical axis of the cone.

Circle: Set of points in a plane equidistant from a fixed point. A circle with radius r and centre (h, k) can be represented as ( x-h)2+( y-k )2=r2

Parabola: Set of points in a plane that are equidistant from a fixed-line and point. A parabola with a > 0, focus at (a, 0), and directrix x = – a can be represented as y2=4ax

In parabola y2=4ax, the length of the latus rectum is given by 4a.

Hyperbola: The difference of distances of set of points in a plane from two fixed points is constant. The hyperbola with foci on the x-axis can be represented as: 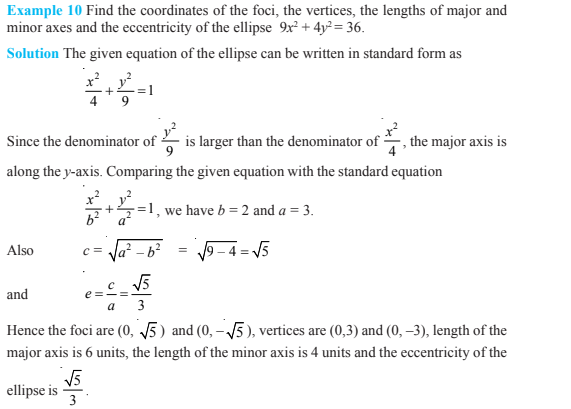 Stay tuned with BYJU’S – The Learning App to learn the class-wise Maths-related concepts and also refer other concepts to learn with ease.