The topics and subtopics covered in Linear inequalities for class 11 include:

Rule 1: Add or subtract the same number on both the sides of an equation, without affecting the sign of the inequality

Rule 2: Multiply or divide both sides of an inequality equation by the same positive number.

Now, let us discuss a few examples of solving the linear inequalities in one variable and its graphical representation.

Now, add -6x on both sides of the inequality

Therefore, all the real numbers which are greater than -2 are the solution for the given inequality.

The given inequality is written as:

Hence, the graphical representation for the inequality x ≥ 1 is given below:

Now, substitute x=0 in the inequality, we get

Hence, the inequality 3x – 6 ≥ 0 is graphically represented as: 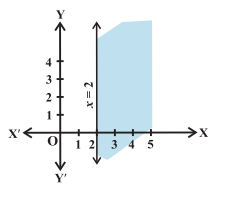 Solve the linear inequality class 11 problems given below:

To learn all concepts in Math in a more engaging way, register at BYJU’S. Also, watch interesting videos on various Maths topics by downloading BYJU’S – The Learning App from Google Play Store or the app store.