Following example validates the difference between equation and inequality:

Statement 1: The distance between your house and school is exactly 4.5 kilometres,

The mathematical expression of the above statement is,

Statement 2: The distance between your house and the school is at least 4.5 kilometers.

Here, the distance can be 4.5 km or more than that. Therefore the mathematical expression for the above statement is,

x ≥ 4.5 km, where ‘x’ is a variable which is equal to the distance between house and the school.

In the above examples,  2x + 3 < 6 is a linear inequality in one variable because ‘x’ is the only one variable present in the expression.

Similarly, 2x + 3y ≥ 6  is a linear inequality in two variables because there are two variables ‘x’ and ‘y’ are present in the expression.

Note: 4x2 + 2x + 5 < 0 is not an example of linear inequality in one variable, because the exponent of x is 2 in the first term. It is a quadratic inequality.

1.) Classify the following expressions into:

Solution: Graph of y = 2. So we can show it graphically as given below: 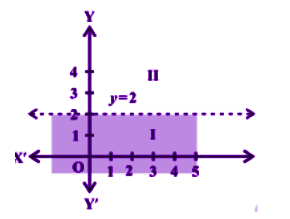 Hence, every point below the line (excluding all the points on the line) determines the solution of the given inequality.

Solution: As per the question it is given:

Thus, the required range of temperature is between 77° F and 86° F