In Mathematics, the meaning of connectivity is one of the fundamental concepts of graph theory. It demands a minimum number of elements (nodes or edges) that require to be removed to isolate the remaining nodes into separated subgraphs. It is closely related to the principles of network flow problems. The connectivity of a graph is an essential measure of its flexibility as a network.

The word “connectivity” may belong to several applications in day to day life. Usually, it is referred to as the connection between two or more things or properties. In terms of different subjects, the definition of connectivity is described below:

Connectivity is one of the essential concepts in graph theory. A graph may be related to either connected or disconnected in terms of topological space. If there exists a path from one point in a graph to another point in the same graph, then it is called a connected graph. Else, it is called a disconnected graph. Below are the diagrams which show various types of connectivity in the graphs. 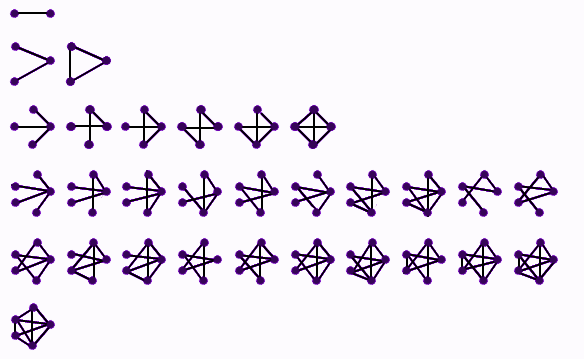 A graph is a connected graph if, for each pair of vertices, there exists at least one single path which joins them. A connected graph may demand a minimum number of edges or vertices which are required to be removed to separate the other vertices from one another. The graph connectivity is the measure of the robustness of the graph as a network.

There are different types of connected graphs explained in Maths. They are:

Let us learn them one by one.

In graph theory, the concept of a fully-connected graph is crucial. It is also termed as a complete graph. It is a connected graph where a unique edge connects each pair of vertices. In other words, for every two vertices of a whole or a fully connected graph, there is a distinct edge.

A fully connected graph is denoted by the symbol Kn, named after the great mathematician Kazimierz Kuratowski due to his contribution to graph theory. A complete graph Kn possesses n/2(n−1) number of edges. Given below is a fully-connected or a complete graph containing 7 edges and is denoted by K7. 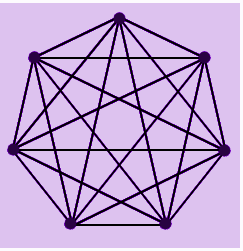 In a graph (say G) which may not be strongly connected itself, there may be a pair of vertices say (a and b) that are called strongly connected to each other if in case there exists a path in all the possible directions between a and b.

Q.1: If a complete graph has a total of 20 vertices, then find the number of edges it may contain.

Solution: The formula for the total number of edges in a k15 graph is given by;

Solution: As we know,

On solving the above quadratic equation, we get;

Since, the number of vertices cannot be negative.