In analytical geometry, the directional cosines also known as direction cosine of a vector is defined as the cosines of the angles between the three coordinate axes and the vector.  In this section, we will first learn about the position vector of a point and direction cosines and then finding the angle between two lines.

If O is taken as reference origin and A is an arbitrary point in space then the vector \(\vec{OA}\) is called as the position vector of the point.

Let us consider a point P lying in space and if its position vector makes positive angles (anticlockwise direction) of α, β and γ with the positive x,y and z-axis respectively, then these angles are known as direction angles and on taking the cosine of these angles we get direction cosines. Taking direction cosines makes it easy to represent the direction of a vector in terms of angles with respect to the reference.

The coordinates of the point P may also be expressed as the product of the magnitude of the given vector and the cosines of direction on the three axes, i.e.

Let L1 and L2 represent two lines having the direction ratios as a1, b1, c1 and a2, b2, c2 respectively such that they are passing through the origin. Let us choose a random point An on the line L1 and B on the line L2. Considering the directed lines OA and OB as shown in the figure given below, let the angle between these lines be θ. 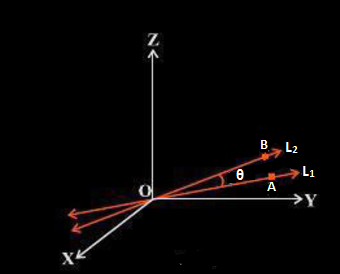 Using the concept of direction cosines and direction ratios, the angle θ between L1 and L2 is given by:

How to Find the Direction Cosine?