Whenever two straight lines intersect, they form two sets of angles. The intersection forms a pair of acute and another pair of obtuse angles. The absolute values of angles formed depend on the slopes of the intersecting lines.

Consider the diagram below: 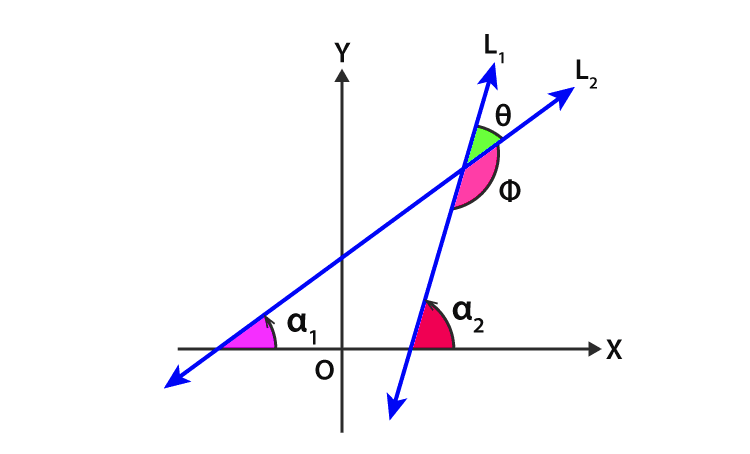 In the diagram above, the line L1 and line L2  intersect at a point.

Let the slope measurement can be taken as

Substituting the values of tan θ1 and tan θ2 as m1 and m2 respectively, we have,

It should be noted that the value of tan θ in this equation will be positive if θ is acute and negative if θ is obtuse.

In analytic geometry, if the coordinates of three points A, B, and C are given, then the angle between the lines AB and BC can be calculated as follows:

For a line whose endpoints are (x1y1) and (x2y2), the slope of the line is given by the equation

We shall explore solved numerical problems in the next section.

The slope of PQ is given by

The slope of QR is given by

Substituting the values of m2 and m1 in the formula for the angle between two lines when we know the slopes of two sides, we have,

Learn more about angle between two lines and related topics from analytic geometry in a simple way. Register with BYJU’S – The Learning App today.