Here, the coefficients nCr are called binomial coefficients. There will be (n+1) terms in the expansion of (a+b)n , i.e., one more than the index. Also, in the successive terms of the expansion, we can observe that the index of “a” decreases by unity. It is n in the first term, (n – 1) in the second term, and so on, ending with zero in the last term. At the same time, the index of “b” increases by unity, starting with zero in the first term, 1 in the second, and so on ending with n in the last term.

General Term of the Binomial Expansion

From the above pattern of the successive terms, we can say that the (r + 1)th term is also called the general term of the expansion (a + b)n and is denoted by Tr+1.

This formula is used to find the specific terms, such as the term independent of x or y in the binomial expansions of (x + y)n. Go through the example given below to understand how the general term formula of binomial expansion helps.

According to the given,

Middle Term of the Binomial Expansion 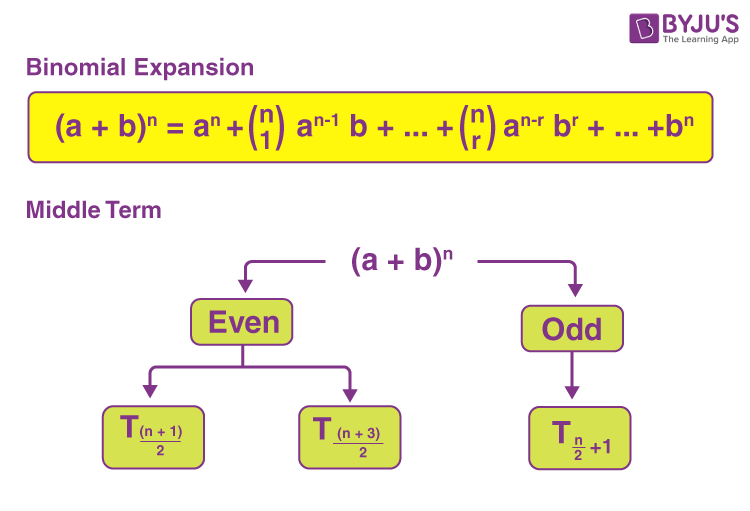 When n is Even

When n is Odd

If n is odd, then n +1 is even, there will be two middle terms in the expansion, and they are:

Let’s have a look at the examples given below to learn how to find the middle terms in the binomial expansions.

As the value of n is odd, there will be two middle terms.

So, there will be only one middle term.

Try solving the following questions for better understanding of the concepts.