Important Questions Class 9 Maths Chapter 10 Circles are provided as per NCERT book and CBSE syllabus. These questions have been provided by our subject experts to help students score good marks in their final exam. Also, there are some extra questions given in the below section for better practice and revision. 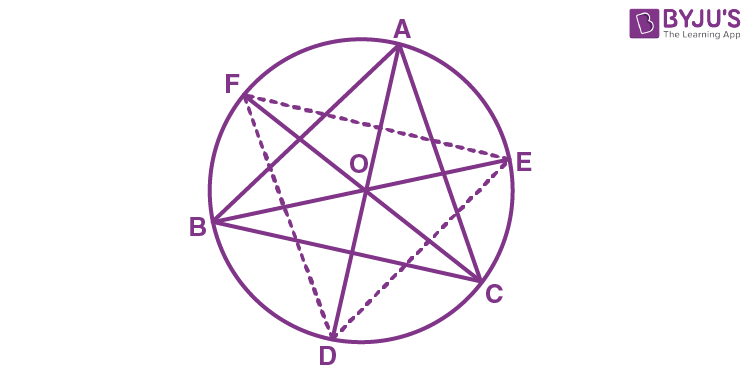 Here, ABC is inscribed in a circle with center O and the bisectors of ∠A, ∠B and ∠C intersect the circumcircle at D, E and F respectively.

As angles in the same segment are equal, so,

Adding equations (i) and (ii) we have,

In a similar way, 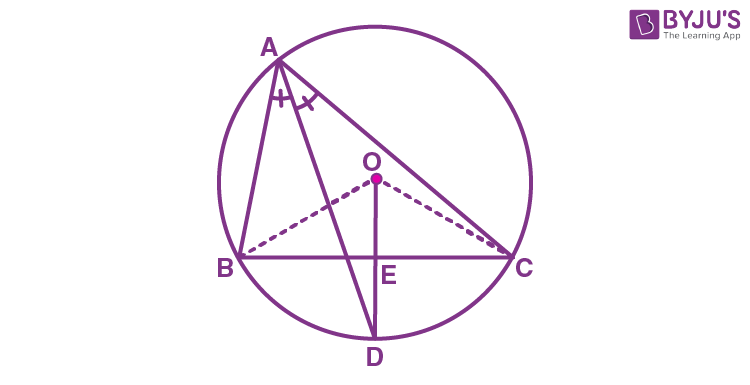 Prove that the circle drawn with any side of a rhombus as diameter passes through the point of intersection of its diagonals. 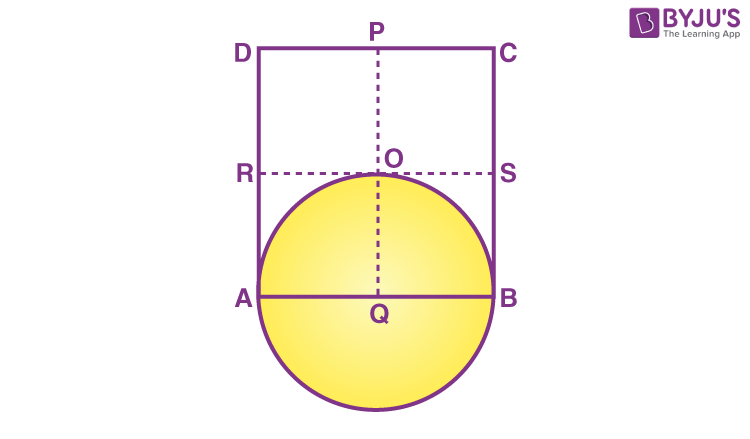 Since all sides of a rhombus are equal,

Now, multiply (½) on both sides

Since Q is the midpoint of AB,

Again, as PQ is drawn parallel to AD,

Two chords AB and CD of lengths 5 cm and 11 cm respectively of a circle are parallel to each other and are on opposite sides of its centre. If the distance between AB and CD is 6, find the radius of the circle. 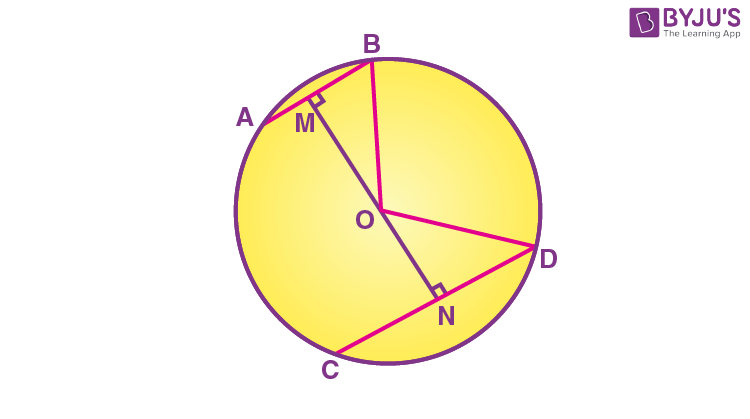 Here, OM ⊥ AB and ON ⊥ CD. is drawn and OB and OD are joined.

As we know, AB bisects BM as the perpendicular from the centre bisects the chord.

If circles are drawn taking two sides of a triangle as diameters, prove that the point of intersection of these circles lies on the third side.

First, draw a triangle ABC and then two circles having a diameter as AB and AC respectively.

As we know, angle in the semi-circle are equal

∴ ∠BDC is a straight line.

If the non-parallel sides of a trapezium are equal, prove that it is cyclic.

AM =BN (perpendiculars between parallel lines)

∠BAD and ∠ADC are on the same side of transversal AD.

Since, the opposite angles are supplementary, therefore, ABCD is a cyclic quadrilateral.

ABCD is a cyclic quadrilateral whose diagonals intersect at a point E. If ∠DBC = 70°, ∠BAC is 30°, find ∠BCD. Further, if AB = BC, find ∠ECD.

As we know, angles in the same segment are equal.

Now, ∠BAD will be equal to the sum of angles BAC and CAD.

As we know, the opposite angles of a cyclic quadrilateral sum up to 180 degrees.

Also, ∠BCA = ∠CAB (Angles opposite to equal sides of a triangle)

As we know, angles in the segment of the circle are equal so,

Now in the In ΔABC, sum of all the interior angles will be 180°

A circular park of radius 20m is situated in a colony. Three boys Ankur, Syed and David are sitting at equal distance on its boundary each having a toy telephone in his hands to talk each other. Find the length of the string of each phone.

First, draw a diagram according to the given statements. The diagram will look as follows.

Here the positions of Ankur, Syed and David are represented as A, B and C respectively. Since they are sitting at equal distances, the triangle ABC will form an equilateral triangle.

AD ⊥ BC is drawn. Now, AD is median of ΔABC and it passes through the centre O.

Also, O is the centroid of the ΔABC. OA is the radius of the triangle.

If two equal chords of a circle intersect within the circle, prove that the line joining the point of intersection to the centre makes equal angles with the chords.

From the question we have the following conditions:

(i) AB and CD are 2 chords which are intersecting at point E.

(ii) PQ is the diameter of the circle.

For this, the following construction has to be done:

Draw two perpendiculars are drawn as OM ⊥ AB and ON ⊥ CD. Now, join OE. The constructed diagram will look as follows:

If two circles intersect at two points, prove that their centres lie on the perpendicular bisector of the common chord.

It is given that two circles intersect each other at P and Q.

OO’ is a perpendicular bisector of PQ.

Triangle ΔPOO’ and ΔQOO’ are similar by SSS congruency since

Even triangles ΔPOR and ΔQOR are similar by SAS congruency as

Also, As we know,

So, OO’ is the perpendicular bisector of PQ.

Prove that if chords of congruent circles subtend equal angles at their centres, then the chords are equal.

Here, it is given that ∠AOB = ∠COD i.e. they are equal angles.

Now, we will have to prove that the line segments AB and CD are equal i.e. AB = CD.

In triangles AOB and COD,

Solve the below given important questions class 9 Maths chapter 10 circles to score good marks in the final examination.

Keep visiting BYJU’S – The Learning app and download the app to get all the class-wise important questions and learn all Maths-related concepts quickly by exploring more videos.