In mathematics, an integral plays a crucial role while dealing with calculus concepts. It assigns numbers to functions to express displacement, area, volume and other theories that arise by connecting infinitesimal data. However, there exist several applications of integrals in various fields. In this article, you will learn what integral means. Types of integrals, formulas and integrals for some of the functions in detail.

This can be simplified as:

Definite Integral is also called a Riemann Integral when it is determined to lie on the real line.

F(x) is called an anti-derivative or primitive function.

f(x) is called the integrand.

dx is called the integrating agent.

C is called the constant of integration.

x is the variable of integration.

The operation of integration, up to an additive constant, is the inverse of differentiation operation. For this reason, the term integral may also refer to the related notion of the antiderivative. Thus, a function F or F(x) whose derivative is the given function f or f(x).

Some of the important formulas of integral functions are listed below: 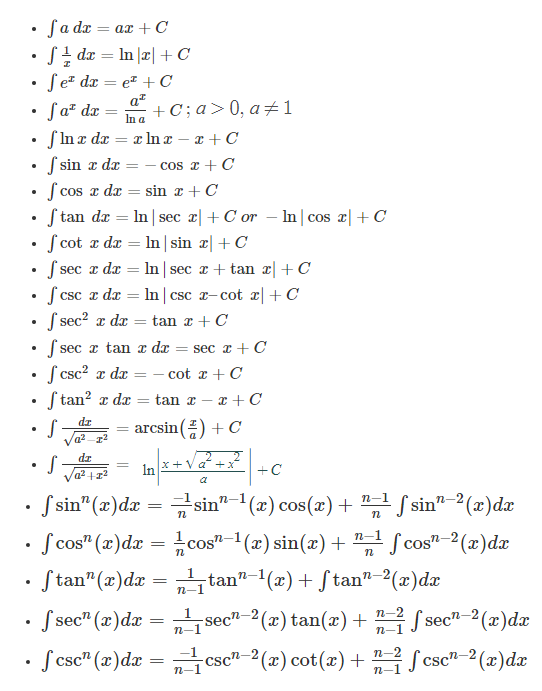 The uv formula of integral is generally used to calculate the integration by parts. This can be expressed as:

Let us derive the formula for integral log x here.

∫ uv′ = uv – ∫ vu′ where u and v are functions of x and prime here indicates derivatives.

Using the ILATE rule, let us take the functions as u(x) and v(x).

Thus, by substituting these functions in the formula we get,

Where C is integration constant.

The integral of tan x can be derived using substitution method. Here, we have to assume one part of the function as u and find the derivative of this function to substitute in the integral of the given function. This can be understood in a better way using the derivation given below.

Test your knowledge on Integral
Q5