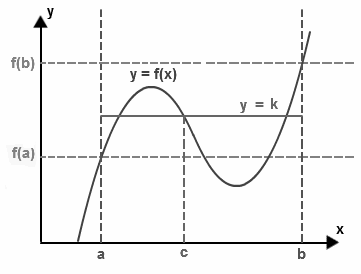 The statement of intermediate value theorem seems to be complicated. But it can be understood in simpler words. Let us consider the above diagram, there is a continuous function f with endpoints a and b, then the height of the point “a” and “b” would be “f(a)” and “f(b)”.

If we pick a height k between these heights f(a) and f(b), then according to this theorem, this line must intersect the function f at some point (say c), and this point must lie between a and b.

An intermediate value theorem, if c = 0, then it is referred to as Bolzano’s theorem.

We are going to prove the first case of the first statement of the intermediate value theorem since the proof of the second one is similar.

We will prove this theorem by the use of completeness property of real numbers. The proof of “f(a) < k < f(b)” is given below:

Here A is supposed to be a non-empty set as it has an element “a” and also A is bounded above by the value “b”.

Thus, by completeness property, we have that, “c” be the lowest value which is greater than or equal to each element of A. Hence, we can say that f(c) = k.

Similarly, values of x between c and c + δ that are not contained in A, such that

Combining both the inequality relations, obtain

Hence, the theorem is proved.

The intermediate value theorem has many applications. Mathematically, it is used in many areas. This theorem is utilized to prove that there exists a point below or above a given particular line. It is also used to analyze the continuity of a function that is continuous or not.

This theorem has many implications in Physics and Chemistry problems too. It is applicable whenever there is a continuously varying scalar quantity with endpoints sharing the same value for a variable. These quantities may be – pressure, temperature, elevation, carbon dioxide gas concentration, etc.

Intermediate value theorem has some significant real-life applications too. Let us take an example of a wobbly table due to the uneven ground. In order to fix this, rotate the table, provided that the ground is continuous; i.e. no ups and downs due to poorly-fitted tiles.

Substitute x = 0 in the given function

Substitute x = 2 in the given function

Since the given equation is a polynomial, its graph will be continuous.

Thus, applying the intermediate value theorem, we can say that the graph must cross at some point between (0, 2).

Visit BYJU’s – The Learning App and download the app to explore all the important Maths-related videos to learn with ease.