Sampling error can be measured in different ways, but in reality, the error obtained is almost always an estimate of the actual error rather than the absolute measure of the error. To calculate any true population, first, we have to calculate the sample value.

The concept of sampling error can be understood from the following diagram: 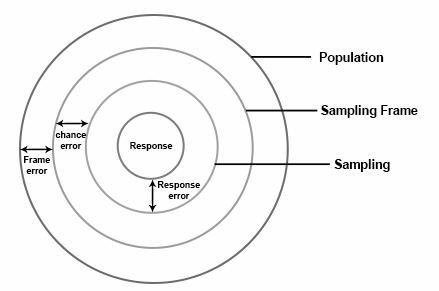 From the above diagram

The formula to find the sampling error is given as follows:

How to Reduce Sampling Error?

There are two methods by which this sampling error can be reduced. The methods are

If all the population units are homogeneous or the population has the same characteristic feature, it’s very easy to get a sample. The sample can be taken as a representative of the entire population. But if the population is not homogeneous (i.e population with the different characteristic features); it is impossible to get a perfect sample. In such conditions, to get a better representative, the sample design is altered. The population is classified into different groups called strata, that contain similar units. From each of these strata, a sub-sample is selected in a random manner. Thus, all the groups are defined in the sample, the sampling error is reduced. Hence, the sub-sample size from each stratum is in proportion with the stratum size.