In Statistics, the variables or numbers are defined and categorised using different scales of measurements. Each level of measurement scale has specific properties that determine the various use of statistical analysis. In this article, we will learn four types of scales such as nominal, ordinal, interval and ratio scale.

What is the Scale?

A scale is a device or an object used to measure or quantify any event or another object.

There are four different scales of measurement. The data can be defined as being one of the four scales. The four types of scales are: 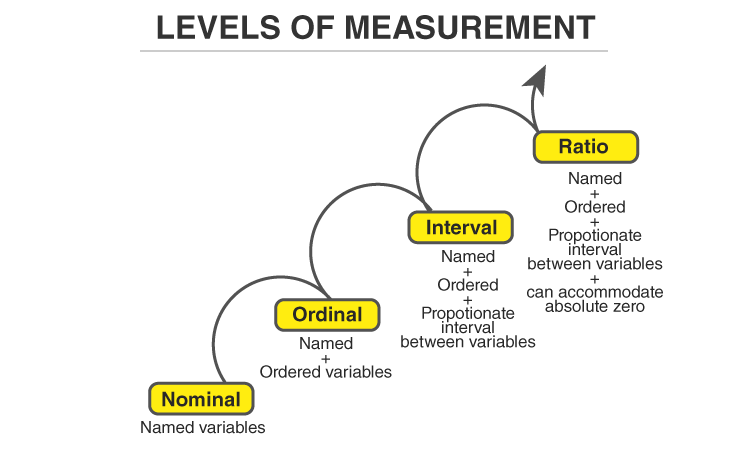 A nominal scale is the 1st level of measurement scale in which the numbers serve as “tags” or “labels” to classify or identify the objects. A nominal scale usually deals with the non-numeric variables or the numbers that do not have any value.

An example of a nominal scale measurement is given below:

What is your gender?

Here, the variables are used as tags, and the answer to this question should be either M or F.

The ordinal scale is the 2nd level of measurement that reports the ordering and ranking of data without establishing the degree of variation between them. Ordinal represents the “order.” Ordinal data is known as qualitative data or categorical data. It can be grouped, named and also ranked.

Characteristics of the Ordinal Scale

An example of a ratio scale is:

What is your weight in Kgs?