What are the sampling methods or Sampling Techniques?

In Statistics, the sampling method or sampling technique is the process of studying the population by gathering information and analyzing that data. It is the basis of the data where the sample space is enormous.

There are several different sampling techniques available, and they can be subdivided into two groups. All these methods of sampling may involve specifically targeting hard or approach to reach groups.

In Statistics, there are different sampling techniques available to get relevant results from the population. The two different types of sampling methods are::

What is Probability Sampling?

In simple random sampling technique, every item in the population has an equal and likely chance of being selected in the sample. Since the item selection entirely depends on the chance, this method is known as “Method of chance Selection”. As the sample size is large, and the item is chosen randomly, it is known as “Representative Sampling”.

Suppose we want to select a simple random sample of 200 students from a school. Here, we can assign a number to every student in the school database from 1 to 500 and use a random number generator to select a sample of 200 numbers.

Suppose the names of 300 students of a school are sorted in the reverse alphabetical order. To select a sample in a systematic sampling method, we have to choose some 15 students by randomly selecting a starting number, say 5.  From number 5 onwards, will select every 15th person from the sorted list. Finally, we can end up with a sample of some students.

For example,  there are three bags (A, B and C), each with different balls. Bag A has 50 balls, bag B has 100 balls, and bag C has 200 balls. We have to choose a sample of balls from each bag proportionally. Suppose 5 balls from bag A, 10 balls from bag B and 20 balls from bag C.

In the clustered sampling method, the cluster or group of people are formed from the population set. The group has similar significatory characteristics. Also, they have an equal chance of being a part of the sample. This method uses simple random sampling for the cluster of population.

An educational institution has ten branches across the country with almost the number of students. If we want to collect some data regarding facilities and other things, we can’t travel to every unit to collect the required data. Hence, we can use random sampling to select three or four branches as clusters.

All these four methods can be understood in a better manner with the help of the figure given below. The figure contains various examples of how samples will be taken from the population using different techniques. 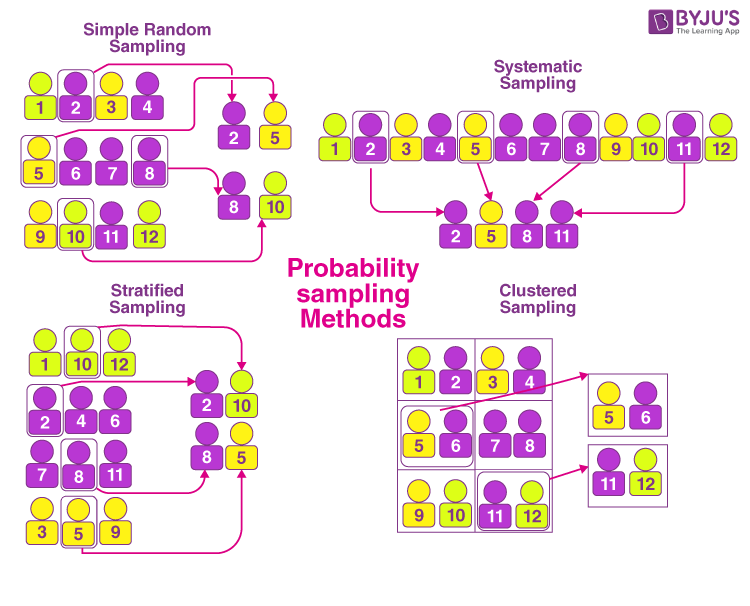 What is Non-Probability Sampling?

The non-probability sampling method is a technique in which the researcher selects the sample based on subjective judgment rather than the random selection. In this method, not all the members of the population have a chance to participate in the study.

In researching customer support services in a particular region, we ask your few customers to complete a survey on the products after the purchase. This is a convenient way to collect data. Still, as we only surveyed customers taking the same product. At the same time, the sample is not representative of all the customers in that area.

Consecutive sampling is similar to convenience sampling with a slight variation. The researcher picks a single person or a group of people for sampling. Then the researcher researches for a period of time to analyze the result and move to another group if needed.

In the quota sampling method, the researcher forms a sample that involves the individuals to represent the population based on specific traits or qualities. The researcher chooses the sample subsets that bring the useful collection of data that generalizes the entire population.

In purposive sampling, the samples are selected only based on the researcher’s knowledge. As their knowledge is instrumental in creating the samples, there are the chances of obtaining highly accurate answers with a minimum marginal error. It is also known as judgmental sampling or authoritative sampling.

Snowball sampling is also known as a chain-referral sampling technique. In this method, the samples have traits that are difficult to find. So, each identified member of a population is asked to find the other sampling units. Those sampling units also belong to the same targeted population.

What are sampling methods in statistics?

What are the methods of probability sampling?

What are the non-probability sampling methods?

What is an example of simple random sampling?

How do you collect a convenience sample?