Statistics is the study of the collection, analysis, interpretation, presentation, and organization of data. In other words, it is a mathematical discipline to collect, summarize data. Also, we can say that statistics is a branch of applied mathematics. However, there are two important and basic ideas involved in statistics; they are uncertainty and variation. The uncertainty and variation in different fields can be determined only through statistical analysis. These uncertainties are basically determined by the probability that plays an important role in statistics.

Statistics is simply defined as the study and manipulation of data. As we have already discussed in the introduction that statistics deals with the analysis and computation of numerical data. Let us see more definitions of statistics given by different authors here.

According to Merriam-Webster dictionary, statistics is defined as “classified facts representing the conditions of a people in a state – especially the facts that can be stated in numbers or any other tabular or classified arrangement”.

According to statistician Sir Arthur Lyon Bowley, statistics is defined as “Numerical statements of facts in any department of inquiry placed in relation to each other”.

Some of the real-life examples of statistics are:

Mean is the average of the observations. Median is the central value when observations are arranged in order. The mode determines the most frequent observations in a data set.

Mathematical statistics is the application of Mathematics to Statistics, which was initially conceived as the science of the state — the collection and analysis of facts about a country: its economy, and, military, population, and so forth.

Basically, there are two types of statistics.

In the case of descriptive statistics, the data or collection of data is described in summary. But in the case of inferential stats, it is used to explain the descriptive one. Both these types have been used on large scale.

The formulas that are commonly used in statistical analysis are given in the table below.

The summary statistics table is the visual representation of summarized statistical information about the data in tabular form.

Statistics is used in many sectors such as psychology, geology, sociology, weather forecasting, probability and much more. The goal of statistics is to gain understanding from the data, it focuses on applications, and hence, it is distinctively considered as a mathematical science.

The methods involve collecting, summarizing, analyzing, and interpreting variable numerical data. Here some of the methods are provided below.

What is Data in Statistics?

Data is a collection of facts, such as numbers, words, measurements, observations etc.

There are different ways to represent data such as through graphs, charts or tables. The general representation of statistical data are:

In Mathematics, statistics are used to describe the central tendencies of the grouped and ungrouped data. The three measures of central tendency are:

All three measures of central tendency are used to find the central value of the set of data.

In statistics, the dispersion measures help interpret data variability, i.e. to understand how homogenous or heterogeneous the data is. In simple words, it indicates how squeezed or scattered the variable is. However, there are two types of dispersion measures, absolute and relative. They are tabulated as below:

Skewness, in statistics, is a measure of the asymmetry in a probability distribution. It measures the deviation of the curve of the normal distribution for a given set of data.

The value of skewed distribution could be positive or negative or zero. Usually, the bell curve of normal distribution has zero skewness.

ANOVA Stands for Analysis of Variance. It is a collection of statistical models, used to measure the mean difference for the given set of data.

Statistics have huge applications across various fields in Mathematics as well as in real life. Some of the applications of statistics are given below: 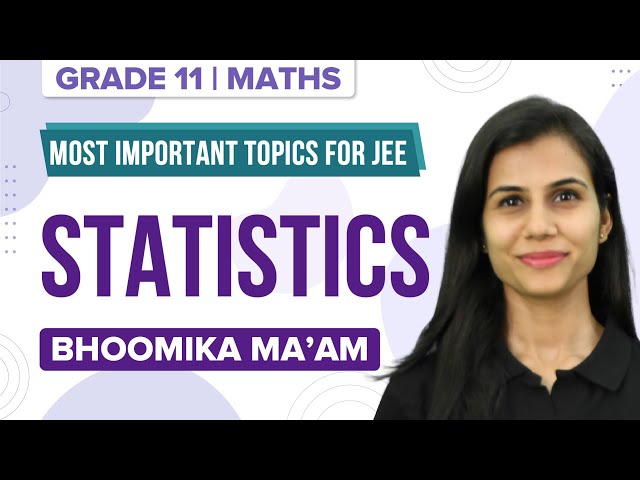 Hope this detailed discussion and formulas on statistics will help you to solve problems quickly and efficiently. Learn more Maths concepts at BYJU’S with the help of interactive videos.

What exactly is statistics?

Statistics is a branch that deals with the study of the collection, analysis, interpretation, organisation, and presentation of data. Mathematically, statistics is defined as the set of equations, which are used to analyse things.

What are the two types of statistics?

The two different types of statistics used for analyzing the data are:

What is Summary Statistics?

Summary statistics is a type of descriptive statistics, which is used to summarize the set of observations with large information as simply as possible. Statisticians used to describe the observation by finding the measures of central tendency, statistical dispersion, statistical dependence, and the shape of the distribution.

How is statistics applicable in Maths?

Statistics is a part of Applied Mathematics that uses probability theory to generalize the collected sample data. It helps to characterize the likelihood where the generalizations of data are accurate. This is known as statistical inference.

What is the purpose of statistics?

Statistics make us learn to utilize a restricted sample to make accurate determinations about a more prominent populace. The utilization of tables, diagrams, and graphs assumes a crucial part in introducing the information being utilized to reach these determinations.

What is the importance of Statistics in real life?

Statistics encourages you to utilize legitimate strategies to gather the information, utilize the right examinations, and successfully present the outcomes. Measurement is a significant cycle behind how we make disclosures in science, settle on choices dependent on information, and make forecasts.
Test your knowledge on Statistics
Q5