What is the Median?

The median of a set of data is the middlemost number in the set. The median is also the number that is halfway into the set. To find the median, the data should first be arranged in order from least to greatest. A median is a number that is separated by the higher half of a data sample, a population or a probability distribution, from the lower half. 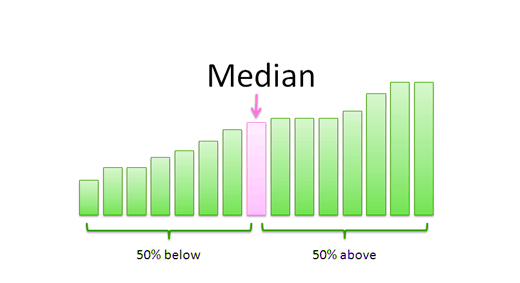 The formula to calculate the median of the data set is given as follows:

If the total number of observation given is odd, then the formula to calculate the median is:

If the total number of observation is even, then the median formula is:

How to Calculate the Median?

To find the median, place all the numbers in the ascending order and find the middle.

Find the median of the following:

When we put those numbers in the order we have:

There are fifteen numbers. Our middle is the eighth number:

The median value of this set of numbers is 24.

Rahul’s family drove through 7 states on summer vacation. The prices of Gasoline differ from state to state. Calculate the median of gasoline cost.

By organizing the data from smallest to greatest, we get:

Hence, the median of the gasoline cost is 1.84. There are three states with greater gasoline costs and 3 with smaller prices.

For more Maths-related articles, register with BYJU’S – The Learning App and download the app to learn with ease.