Venn diagrams are the diagrams that are used to represent the sets, relation between the sets and operation performed on them, in a pictorial way. Venn diagram, introduced by John Venn (1834-1883), uses circles (overlapping, intersecting and non-intersecting), to denote the relationship between sets. A Venn diagram is also called a set diagram or a logic diagram showing different set operations such as the intersection of sets, union of sets and difference of sets. It is also used to depict subsets of a set.

The universal set (U) is usually represented by a closed rectangle, consisting of all the sets. The sets and subsets are shown by using circles or oval shapes.

What is a Venn Diagram?

A diagram used to represent all possible relations of different sets. A Venn diagram can be represented by any closed figure, whether it be a Circle or a Polygon (square, hexagon, etc.). But usually, we use circles to represent each set.

In the above figure, we can see a Venn diagram, represented by a rectangular shape about the universal set, which has two independent sets, X and Y. Therefore, X and Y are disjoint sets. The two sets, X and Y, are represented in a circular shape. This diagram shows that set X and set Y have no relation between each other, but they are a part of a universal set.

We can use the below formula to solve the problems based on two sets.

Check the Venn diagram of three sets given below. 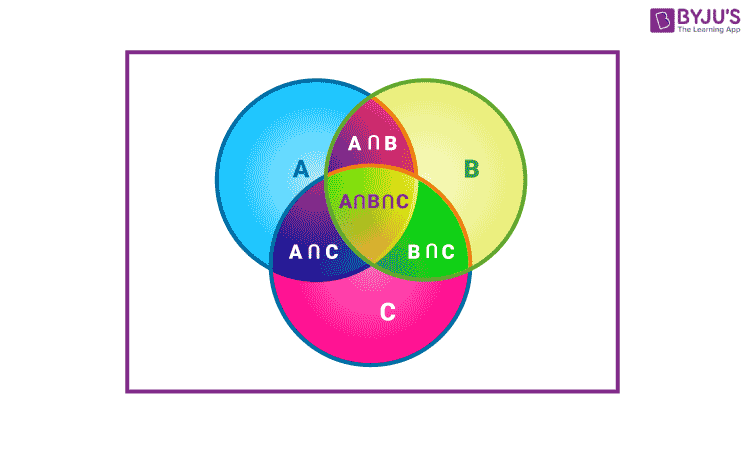 The formula used to solve the problems on Venn diagrams with three sets is given below:

The symbols used while representing the operations of sets are:

How to draw a Venn diagram?

So, any set A (shaded region) will be represented as follows:

Where U is a universal set.

We can say from fig. 1 that

In set theory, there are many operations performed on sets, such as:

etc. The representations of different operations on a set are as follows:

Complement of a set in Venn Diagram

A’ is the complement of set A (represented by the shaded region in fig. 2). This set contains all the elements which are not there in set A.

It is clear that from the above figure,

It means that the set formed with elements of set A and set A’ combined is equal to U.

Properties of Complement of set:

This represents the common elements between set A and B (represented by the shaded region in fig. 3).

Properties of the intersection of sets operation:

This represents the combined elements of set A and B (represented by the shaded region in fig. 4).

Some properties of Union operation:

Complement of Union of Sets in Venn Diagram

(A ∪ B)’: This is read as complement of A union B. This represents elements which are neither in set A nor in set B (represented by the shaded region in fig. 5).

Complement of A U B

Complement of Intersection of Sets in Venn Diagram

(A ∩ B)’: This is read as complement of A intersection B. This represents elements of the universal set which are not common between set A and B (represented by the shaded region in fig. 6).

Complement of A ∩ B

A – B: This is read as A difference B. Sometimes, it is also referred to as ‘relative complement’. This represents elements of set A which are not there in set B(represented by the shaded region in fig. 7).

A ⊝ B: This is read as a symmetric difference of set A and B. This is a set which contains the elements which are either in set A or in set B but not in both (represented by the shaded region in fig. 8).

Example: In a class of 50 students, 10 take Guitar lessons and 20 take singing classes, and 4 take both. Find the number of students who don’t take either Guitar or singing lessons.

Now we subtract the value of C from both A and B. Let the new values be stored in D and E.

Now logic dictates that if we add the values of C, D, E and the unknown quantity “X”, we should get a total of 50 right? That’s correct.

Venn’s diagrams are particularly helpful in solving word problems on number operations that involve counting. Once it is drawn for a given problem, the rest should be a piece of cake.

To learn more from sets and other topics, download BYJU’S – The Learning App and explore the visual power of learning.

What do you mean by venn diagram?

Venn diagram is a diagram used to represent all possible relations of different sets.

How do Venn diagrams work?

A Venn diagram is an illustration that uses circles to exhibit the relationships among things or finite groups of items. Circles that overlap have a commonality, while circles that do not overlap do not share those attributes. Thus, Venn diagrams help to describe the similarities and differences between the given concepts visually.

How do you do Venn diagrams in math?

In maths, Venn diagrams are used to represent the relationship between two or more sets. This way of expressing sets or certain situations helps in better understanding the scenario to conclude easily. Thus, we generally use circles to exhibit the relationships among things or finite groups of items.

What does A ∩ B mean?

What are the different types of Venn diagrams?

What are the four benefits of using Venn diagrams?

The four benefits of using Venn diagrams include the following:
These are used for the classification and comparison of two things.
Different parameters can be obtained without much calculation, such as intersection, union, difference, etc.
Due to its pictorial representation, one can understand the given situation quickly.
These will make the complex calculation much simpler that involves sets.