Surface Area Of A Cone

Cone is defined as a three-dimensional solid structure that has a circular base. A cone can be viewed as a set of non-congruent circular disks that are placed over one another such that the ratio of the radius of adjacent disks remains constant. Consider a cone as a triangle which is being rotated about one of its vertexes. Now, think of a scenario where we need to paint the faces of a conical flask. Before painting, we need to know the quantity that is required to paint all the walls. We need to know the area every face of the container to determine the quantity of paint required and this is known as the total surface area. The total surface area of a cone is the sum of areas of its faces. Let’s derive a general Cone formula to calculate the surface area of a cone.

Take a paper cone and cut it along its slant height to observe the figure being formed by the surface of the cone. Mark the two endpoints as A and B and the point of the intersection of lines as O.

If you further cut this figure into multiple pieces viz. Ob1, Ob2, Ob3, …….., Obn each measuring the same length as the slant height of the original cone, you will observe n triangles are formed out of it. Now, if you try calculating the total area of this figure, you just need to add an area of these individual triangles. Hence,

Total Surface Area of a Cone-

The Total surface area of a cone includes the curved surface as well as area of its base, which is given as-

Thus the total surface area is given by- 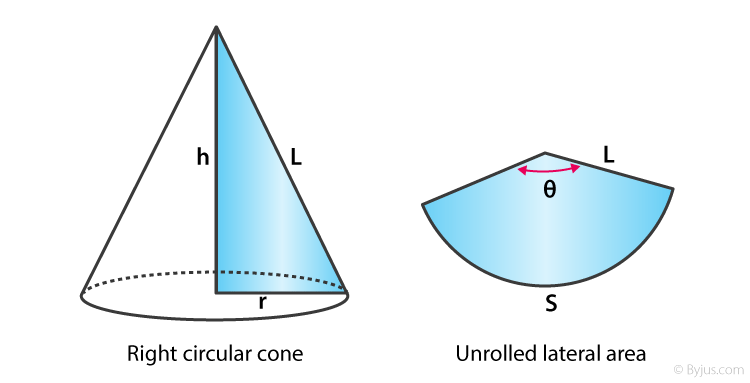 1. Determine the curved surface area of a cone whose base radius is 7 cm and slant height is 15 cm.

2. Calculate the Total surface area of a cone whose radius is 8 cm and height is 12 cm.

Solution- We know that the total surface area is given as

This was all about area of a Cone. Learn more about Volume of a Cone by visiting our site BYJU’S.’