In MSBSHSE Class 8 Science Chapter 1 Living World and Classification of Microbes, students learn about the different types of living organisms and microbes. Here, we bring you the important questions and solutions of the chapter that will help students to understand all the key concepts and master it thoroughly.

In this article, we have extensively covered the important textbook questions and added a few additional questions with solutions for Chapter 1 from the MSBSHSE Class 8 Science Syllabus. Students can practice from these questions to have a sound knowledge of the chapter, revise it before their exams and score well in this section.

Answer: According to Robert Harding Whittaker, given below are the characteristic features of bacteria, protozoa, fungi, algae, prokaryotic and eukaryotic microbes: 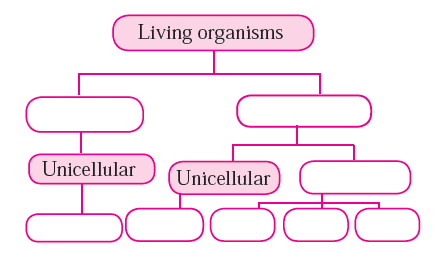 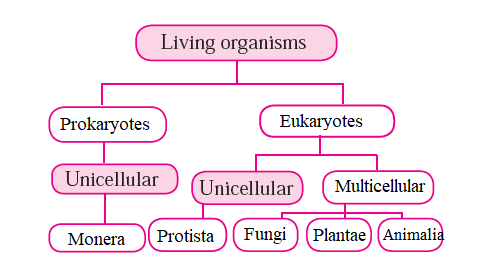 Question 3: Find out my partner

Question 4: State whether the following statements are true or false. Explain your statement.

a. Lactobacilli are harmful bacteria.

b. Cell wall of fungi is made up of chitin.

c. Organ of locomotion in amoeba is pseudopodia.

Lactobacilli are not harmful bacteria. They are mostly found in the gastrointestinal tracts of humans and animals. They are an important component of dairy products such as milk, yogurt, ghee, etc.

b. Cell wall of fungi is made up of chitin.- True

c. Organ of locomotion in amoeba is pseudopodia.- True

a. State the merits of Whittaker’s method of classification.

b. Write the characteristics of viruses.

c. Explain the nutrition in fungi.

d. Which living organisms are included in the kingdom Monera?

Answer: a. Whitakker’s method of classification has the following merits:

b. The various characteristics of viruses are:

c. Fungi are called saprophytes because of their mode of nutrition. It is a nutrition mode in which an organism obtains its nutrients from dead or decomposed organic matter.

d. Organisms with the following characteristics are included under the kingdom Monera:

a. I don’t have a true nucleus, cell organelles or plasma membrane.

b. I have nucleus and membrane bound cell organelles.

e. I can produce my replica.

f. I am green, but don’t have organs.

a. I don’t have a true nucleus, cell organelles or plasma membrane. – Monera

b. I have nucleus and membrane bound cell organelles. – Protozoa

e. I can produce my replica. – Viruses

a. Different types of bacteria

Answer: Given below are the labelled diagrams:

a. Structure of bacteria and its different types 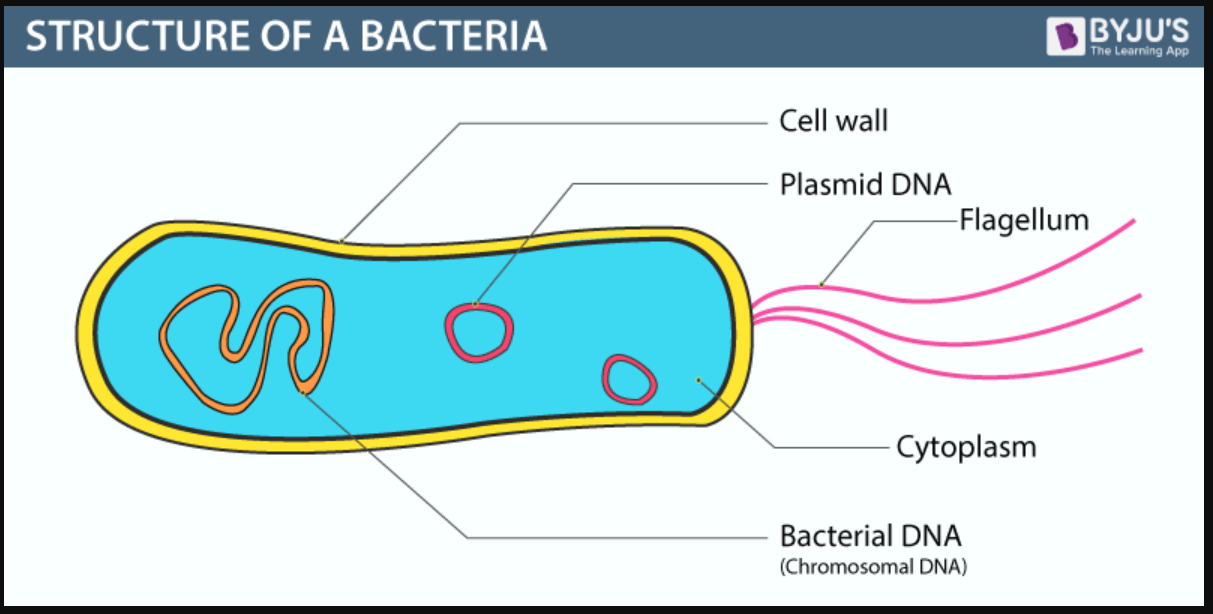 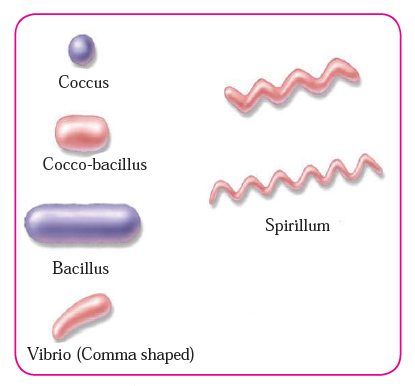 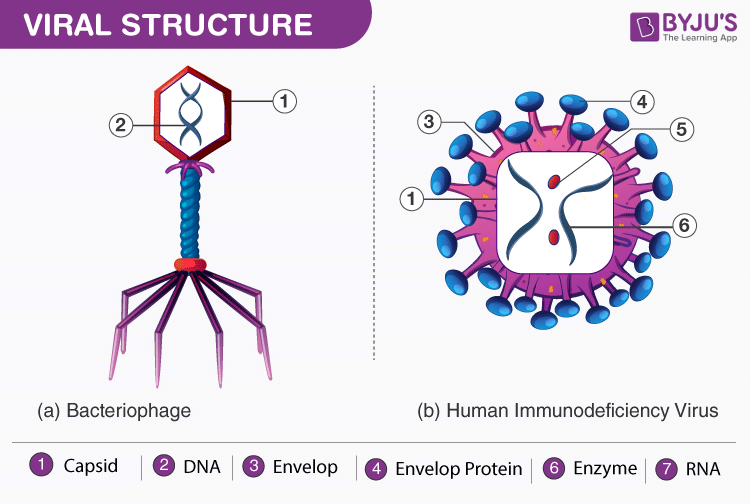 Question 1: What is Biological classification?

Answer: Biological classification is the process of dividing living organisms into groups and subgroups.

Question 2: How many species of living organisms are found on the earth?

Answer: There are around 87 million species of living organisms that are found on the earth which includes both land and sea.

Question 3: What are the different groups of classification of living organisms according to Whittaker?

Answer: Robert Harding Whittaker (1920-1980), an American Ecologist divided living organisms into 5 groups in 1969. These include:

Question 5: Mention the categories of kingdoms by Haeckel.

Question 6: What are the different categories of living organisms created by Chatton?

Question 7: What are the four kingdoms of living organisms mentioned by Kopland?

Question 8: In kingdom Monera, what are the different types of bacteria?

Answer: Different types of bacteria and blue green algae are found in the kingdom Monera. Tiny movable rod-like microbes called lactobacilli bacteria are found in this kingdom. These can be observed under a high power of compound microscope.

Answer: Protista are unicellular organisms with a well defined nucleus which are covered in a nuclear membrane. They have pseudopodia or hair-like cilia or whip-like flagella meant for locomotion.

Question 10: Explain the shape of living organisms in the Protista kingdom.

Answer: Living organisms in the Protista kingdom are motile microbes which have an irregular shape, which can be observed under a low power and high power microscope.

Question 11: Give examples of Autotrophs and Heterotrophs in the Protista kingdom.

Answer: Examples of Autotrophs are Euglena, Volvox that contain chloroplast.

Question 13: What is Bacteria? How is it formed?

Answer: Bacteria are unicellular, independent or parasitic organisms. They usually reproduce by simple binary fission. They grow vigorously under favourable conditions and can double their number in a matter of 20 minutes.

Question 14: Define Protozoa. Where are they found?

Answer: Protozoa are unicellular organisms with eukaryotic cell. They are found in soil, fresh water and sea water. Some are also found in the body of other organisms and are pathogenic in nature. These organisms reproduce by simple cell division.

Question 15: Give some examples of Protozoa.

Answer: Some examples of Protozoa include:

Question 16: How do Fungi reproduce?

Answer: Fungi are eukaryotic organisms that reproduce sexually and asexually by cell division or by budding.

Question 17: Give some examples of Fungi.

Answer: In microbiology, viruses are organisms that live at the edge of living and non livings. Virus is a long molecule of DNA (DeoxyriboNucleic Acid) or RNA (RiboNucleic Acid) which is surrounded by a protein coat.

Question 19: Where are Viruses found?

Answer: Viruses are extremely tiny, i.e. 10 to 100 times smaller than bacteria and can be viewed only under an electron microscope. They are found mostly as independent particles and multiple rapidly in living organisms.

Question 20: What is Algae? Give examples.

Answer: Algae are unicellular, eukaryotic, and autotrophic organisms which live in water. Some examples include Chlorella, Chlamydomonas, etc.

Answer: Given below are the sizes of different microorganisms:

Question 22: What is the criteria based on which Whittaker classified living organisms?

Answer: Whittaker’s classification of living organisms was done on the basis of the following criteria:

2. Complexity of organisms: Unicellular or Multicellular

We hope that the above mentioned solutions of “MSBSHSE Class 8 Science Chapter 1 Living World and Classification of Microbes” will help students build a strong foundation of the different concepts mentioned in the chapter.