MSBSHSE Class 8 Science Chapter 15 can be referred by students when they get stuck while solving the textbook questions. These solutions are explained in a proper step-by-step format in a simple language. Textbook solutions of Class 8 Science Maharashtra Board are accurately explained with well-illustrated diagrams and suitable examples, making learning simple and easy. With the help of these solutions, students can develop a strong conceptual base which plays a major role while writing the final exam paper. All the textbook questions are included in these MSBSHSE Class 8 solutions of Chapter 15.

Q1. Fill in the blank with appropriate word:

c. The total number of compressions and rarefactions produced per second in a sound wave is 1000. The frequency of the sound wave is …..

e. In loudspeaker,……..energy is converted into …………energy.

Answer b: Medium is required for generation of sound.

Answer c: The total number of compressions and rarefactions produced per second in a sound wave is 1000. The frequency of the sound wave is 500.

Answer e: In a loudspeaker, electrical energy is converted into sound energy.

a. It is essential to change the tension on the vocal cords, as we produce different sound notes from our larynx.

b. Astronauts on the moon can not hear each other directly.

Answer a: In the humans, sound is produced in the larynx. While swallowing food, we can feel with our finger a hard bump that seems to move. This is nothing but larynx. It is at the upper end of the windpipe. Two vocal cords are stretched across the voice box or larynx in such a way that it leaves a narrow slit between them for the passage of air. When the lungs force air through the slit, the vocal cords vibrate, producing sound. Muscles attached to the vocal cords can make the cords tight or loose. When the vocal cords are tight and thin, the type or quality of voice is different.

In musical instruments like flute, the holes on the flute are opened or closed to change the length of the vibrating air column in the flute. The frequency of the waves, therefore, changes and it results in the production of different notes. In a flute, different notes can be generated by changing the way of air-blowing also.

Q4. How is sound produced in a human larynx and a loudspeaker?

Answer: In the humans, sound is produced in the larynx. While swallowing food, we can feel with our finger a hard bump that seems to move. This is nothing but larynx. It is at the upper end of the windpipe. Two vocal cords are stretched across the voice box or larynx in such a way that it leaves a narrow slit between them for the passage of air. When the lungs force air through the slit, the vocal cords vibrate, producing sound. Muscles attached to the vocal cords can make the cords tight or loose. When the vocal cords are tight and thin, the type or quality of voice is different.

Sound can be produced using a loudspeaker. It consists of a permanent magnet. A coil is wound around it and if a current flows through this coil, it also generates a magnetic field. We know that if two magnets are brought near each other, they move depending on their positions. In the same way, here, depending on the magnetic field created due to the coil, the coil moves back and forth. The frequency and amplitude of the movement of the coil depend on the variables in the current flowing through the coil. As the coil moves, the conical screen of the loudspeaker, which is attached to the coil, also moves back and forth. Due to back and forth motion of the loudspeaker screen, sound waves are produced in an air. We can feel these vibrations of the loudspeaker screen, just by gently touching the screen of a loudspeaker, which is producing sound.

5. Explain the experiment, with neat diagram, to prove the following:

Now think how the sound produced by drums is heard by us? How is this transferred to our ears? Let us understand this with the help of an experiment.

This still means that the sound is being produced, but now we cannot hear it. This is because sound waves always need a medium to propagate. In the bell jar, it was, hence sound waves cannot travel. 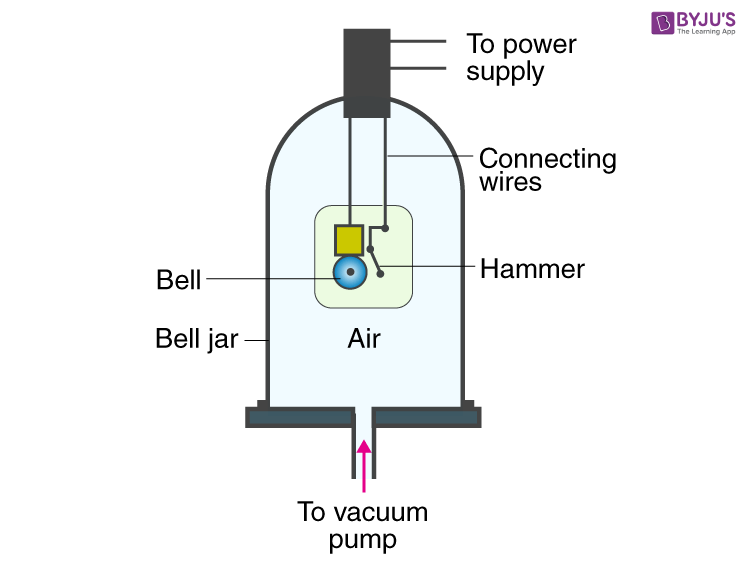 Q7. What is a sound and frequency of sound?

Answer: A sound is a vibration that propagates through a medium in the form of a mechanical wave. The medium in which it propagates can either be a solid, a liquid or a gas. Sound travels faster in solids, relatively slower in liquids and slowest in gases.

Answer: A sound wave is the pattern of disturbance caused by the energy travelling away from the source of the sound. Sound waves are longitudinal waves. This means that the propagation of vibration of particles is parallel to the direction of the energy wave propagation. When the atoms are set in vibration they move back and forth. This continuous back and forth motion results in a high-pressure and a low-pressure region in the medium. These high- pressure and low-pressure regions are termed as compressions and rarefactions, respectively. These regions are transported to the surrounding medium resulting in the sound waves to travel from one medium to another.

Q9. How is sound produced?

Answer: Sound is produced by the vibration of objects and is propagated through a medium from one location to another. The to and fro or back and forth motion of an object is termed as vibration. The motion of objects causes vibrations. In many cases, we can see the vibrations with our naked eyes. While in some cases their amplitude is so small that we cannot see them but can experience them.

Q10. Discuss how we can produce sound using a tuning fork.

Answer: A fork consists of two tines and a handle. When it is hit with a rubber hammer, the two tines start vibrating. The back and forth motion of tines produces disturbances in the surrounding air molecules. As the tines extend outward from their original position, they compress surrounding air molecules which result in the creation of high-pressure region close to the tine. When the tine moves inwards, it produces a low-pressure region near the tine. By more vibrations of time, an alternating pattern of high and low-pressure regions is created. These pressure difference regions help in the propagation of sound waves from one location to another.

Q11. An electric bell is placed inside a transparent glass jar. The bell can be turned on and off using a switch on the outside of the jar. A vacuum is created inside the jar by sucking out the air. Then the bell is rung using the switch. What will we see and hear?

Answer: In this case, we can see the bell ringing, but we cannot hear it. This is because sound needs a medium to travel and it cannot travel in a vacuum. As a result, we do not hear the bell ringing.

Q12. How is sound produced in a human ear?

Answer: A sound produced by objects like drums or alarm clocks is carried away from the object to the ears through the air which acts as the medium. The sound produced is in the form of vibration. It first enters in the ears through the funnel-shaped outer part of the ear. It moves down through a canal till the eardrum (thin membrane is stretched tightly). Eardrum plays an important role in the functioning of the ears. The vibrations produced by the objects reach till the eardrum through the air. These vibrations produced make the eardrum vibrate. And then the vibrations are passed to the inner ear through middle ear bones or ossicles. The shape of the inner ear is like a snail. The inner ear is also termed as the cochlea. There are a numerous number of tiny hair cells present in the cochlea. These hair cells convert the vibrations into electrical signals, which are then transferred to the brain through the auditory nerve. This is how humans detect sound or noise.

Q13. Explain if sound can travel in space.

Answer: A medium is essential for the propagation of sound. Sound cannot travel through a vacuum due to the fact that there are no molecules that can be compressed and expanded in space. Our voice is produced by the vibration of strings known as the vocal cords, which are inside Adam’s apple. When you make a sound, its vibration travels through the air and when it reaches your brain through your ears, it is interpreted as sound. In this case propagation of sound takes place through the air medium.

Answer: Following are a few factors that affect the propagation of sound:

Atmospheric Turbulence: If the atmosphere in which the sound wave is travelling is turbulent, sound waves would scatter due to velocity fluctuations of the medium.

Temperature Gradient: Sound waves travel faster in a warm atmosphere near the surface of the earth. Here, there is an upward refraction of sound waves. In case of a decrease in temperature at higher altitudes, the refraction would be downwards.