We get different feelings through senses. The sense of vision is the most important among our five senses. With the help of vision, we can see the hills, rivers, trees, people and objects around us. Further, with this we can see the beautiful views of nature like clouds, rainbow, flying birds, Moon, stars etc. In this chapter, students will learn about the reflection of light, regular reflection, irregular reflection, etc. Textbook solutions provided in this article, help students to understand the concepts of reflection of light in a better way. These solutions are prepared by highly skilled subject professionals so that students can clear their doubts. Students should refer to these MSBSHSE Class 8 solutions of Science Chapter 16 so that they get to know the correct methodology to write the questions.

Q1. Fill in the blanks

i. The perpendicular to the mirror at the point of incidence is called…………

ii. The reflection of light from a wooden surface is………….. reflection.

iii. The working of Kaleidoscope is based on the properties of …………..

Answer i: The perpendicular to the mirror at the point of incidence is called normal line.

Answer ii: The reflection of light from a wooden surface is diffused reflection.

Answer iii: The working of Kaleidoscope is based on the properties of reflection of light.

The reflecting surfaces of two mirrors make an angle of 90o with each other. If a ray incident of one mirror has an angle of incidence of 30o, draw the ray reflected from the second mirror. What will be its angle of reflection? 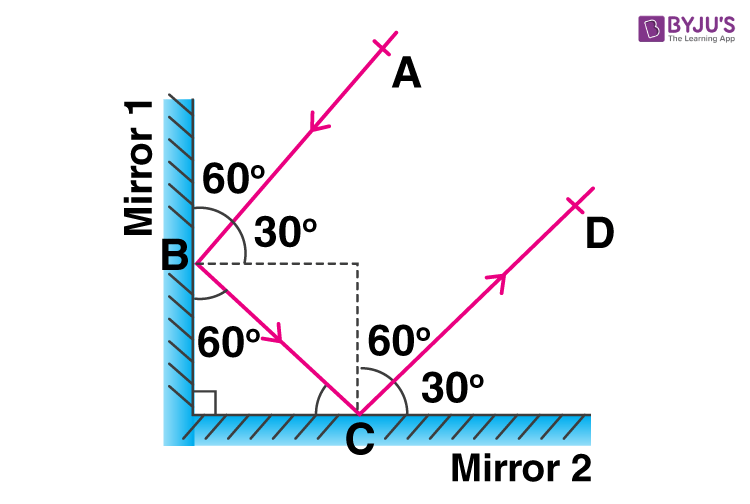 Here, ray AB in the incident ray on the first mirror which makes an angle of 30o.

Ray CD is the reflected ray from the second mirror.

So, its angle of reflection is 60o with the normal.

Q3. How will you explain the statement ‘we cannot see the objects in a dark room’?

Answer: When we switch off the light at night, the objects in the room cannot be seen and they can be seen as before when the light is switched on again. Thus, we can see objects when the light coming from these objects enters our eyes. The light entering our eyes may be emitted by the object or may be reflected by that object.

Q4. Explain the difference between regular and irregular reflection of light.

Answer: The difference between regular and irregular reflection of light are: 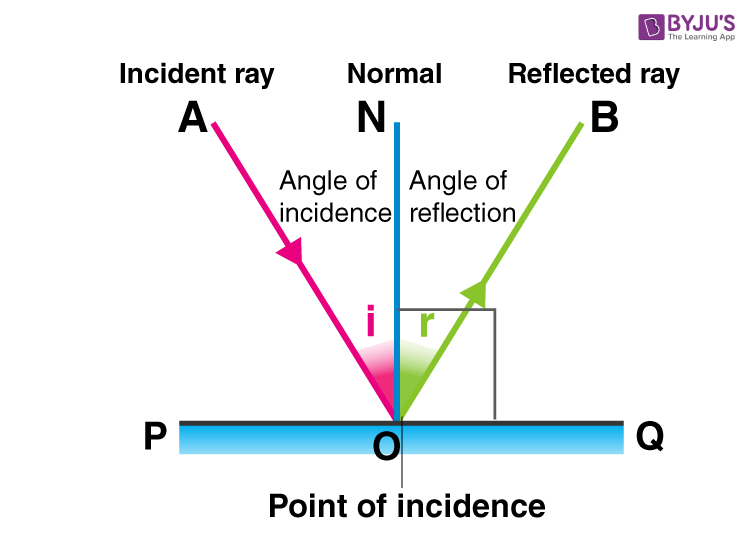 Swara and Yash were looking in a water-filled vessel. They could see their images clearly in the still water. At that instant, Yash threw a stone in the water. Now their images were blurred. Swara could not understand the reason for the blurring of the images.

Explain the reason for blurring of the images to Swara by answering the following question.

i. Is there a relation between the reflection of light and the blurring of the images?

ii. Which types of reflection of light can you notice from this?

Answer i: Yes, there is a relation between the reflection of light and the blurring of the images.

a. If the angle between the plane mirror and the incident ray is 40o, what are the angles of incidence and reflection? (Ans. 50o)

b. If the angle between the mirror and reflected ray is 23o, what is the angle of incidence of the incident ray? (Ans. 67o)

Answer a: Given, the angle made by the light ray with mirror is 40o.

Angle of incidence = Angle of reflection = 50°

Answer b: Given, angle between the mirror and reflected ray is 23o

Angle of reflection = Angle made by the reflected ray with the normal to the plane mirror.

Q9. Write the laws of reflection?

Answer: There are three laws of reflection. These are as given below.

Q12. What is periscope used for?

Answer: Periscope is used in submarines to see objects above the surface of water. It is also used to observe and keep a watch on the objects or persons on the ground from an underground bunker. Periscope uses the properties of reflection of light.

Q13. What is Reflection on a Plane Mirror?

Answer: When the light rays which get stroked on the flat mirror and get reflected back. According to laws of reflection, the angle of reflection is equal to the angle of incidence. The image is obtained behind the plane which is present in the mirror. This process of obtaining a mirror image which is virtual and erect is known as a reflection on a plane mirror.

Q14. What type of image do we see in a mirror? What happens to the left and right sides?

Q15. Write the characteristics of Image formed by Plane Mirror.

Answer: Following are the characteristics of image formed by plane mirror:

Q16. How do we see the image of the Moon in water?

Answer: As moon is not self luminous, the Sun light falling on the surface of the Moon is reflected. This reflected light is again reflected by water to give us the image of the Moon. In this way light can be reflected several times.

Q17. A ray of light is incident towards a plane mirror at an angle of 30° with the mirror surface. What will be the angle of reflection?

According to Law of Reflection,

Q18. What is a Kaleidoscope?

Answer: A kaleidoscope is an optical instrument consisting of two or more reflecting surfaces. These surfaces are tilted towards each other at a certain angle to obtain symmetrical patterns when viewed from the other end. The tube with reflecting surfaces consists of coloured pieces of glass. By rotating the tube, symmetrical images are created.

Q19. What is a mirror and explain the terms related to it.

Q20. Write the types of mirror?

Answer: Following are the types of mirrors that are most widely used:

Plane mirror: The images formed from a plane mirror are the reflected images in their normal proportions but reversed from left to right. These are the most widely used mirrors.

Convex mirror: These are the spherical mirrors that are curved outward and the image obtained is virtual, diminished and erect for a real object.

Concave mirrors: These are the spherical mirrors that are curved inward and the image obtained from these mirrors depend on the placement of the object.