In MSBSHSE Class 8 Science Chapter 5 Inside the Atom, students learn about what comprises inside an atom. Here, we present you the important questions and solutions of the chapter that will help students to get an in-depth understanding of all the essential concepts and master it confidently.

In this article, we have extensively covered all the exercise questions and added a few additional questions, along with solutions for Chapter 5 from the MSBSHSE Class 8 Science Syllabus. Class 8 students can check the questions while studying this chapter and practice from it to build a rock-solid foundation of key concepts that are discussed and score good marks in this subject.

a. What is the difference in the atomic models of Thomson and Rutherford?

b. What is meant by valency of an element? What is the relationship between the number of valence electrons and valency?

c. What is meant by atomic mass number? Explain how the atomic number and mass number of carbon are 6 and 12, respectively.

Answer: a. Differences between Thomson and Rutherford Theory are listed below:

b. Valency of an element: It refers to the number of electrons of an atom of the element that is used to combine or mix with the atoms of other elements. It is the combining capacity of an atom of the respective element.

Here’s the relationship between the number of valence electrons and valency:

Valency of an element can be determined by its electronic configuration. It explains about the gain or loss in the total number of electrons in order to derive at the closest noble gas configuration.

Hence, we have observed that valency of an element is directly proportional to the number of valence electrons in that atom.

c. Atomic Mass Number: It is the sum of the total number of neutrons and protons present in an atomic nucleus.

Mass number is denoted by A = Number of protons + Number of neutrons.

For example : In a carbon atom the total number of protons = 6

d. Subatomic particles: A subatomic particle is a functional and structural unit of matters. This implies that all the matters are a combination of these fundamental particles. As per the modern atomic theory, an atom has a nucleus at its center or core. This nucleus contains subatomic particles such as protons and neutrons in it.

Difference between subatomic particles are listed below:

1. Electrons are usually present outside the atom nucleus.

3. The mass of an electron is considered as negligible as it’s 1800 times less than that of hydrogen.

5. It revolves around the nucleus of an atom in a discrete orbit.

1. Protons are present inside the nucleus of an atom.

4. They are bound in the nucleus closely.

1. Neutrons are present in an atom nucleus.

2. Neutrons have no charge, hence they are neutral.

4. They are bound in the nucleus closely.

a. All the mass of an atom is concentrated in the nucleus.

b. Atom is electrically neutral.

d. Atoms are stable though negatively charged electrons are revolving within it.

b. An atom is electrically neutral because there are electrons and protons in an atom which carry charges and each atom has an equal number of protons (positively charged) and electrons (negatively charged) particles.

c. An atomic mass number is a whole number because it is the cumulative sum of the total number of protons and neutrons present in an atom, which is represented in the form of integers.

Answer: a. Atom: An atom is defined as the structural and functional unit of matter. It is the smallest particle of an element which retains its chemical identity in all the physical and chemical changes. The term “atom” comes from the Greek word ‘Atomos’, which means that which cannot be divided because atoms are the smallest and minutest things in the universe which cannot be divided. Atoms comprise three subatomic particles like protons, neutrons and electrons.

Some common examples of isotopes include carbon has three isotopes, namely, C – 12, C – 13, C – 14. The mass number of isotopes is also represented by another method as 12C , 13C and 14C. The isotopes have the same proton number but different neutron number.

c. Atomic number: Atomic number is equal to the total numbers of electrons in an atom. The number of protons in the nucleus of an atom are characteristic of a chemical element and determine its place in the periodic table.

d. Atomic Mass Number: It is the sum of the total number of protons and neutrons present in an atomic nucleus.

Mass number is denoted by A = number of protons + number of neutrons.

For example : In a carbon atom, Number of protons = 6 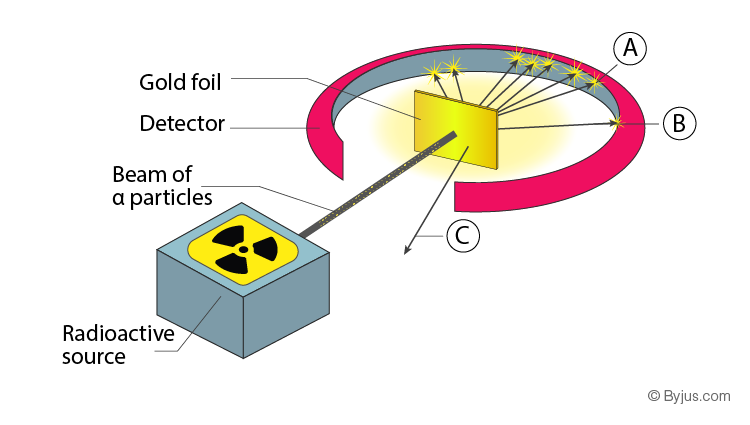 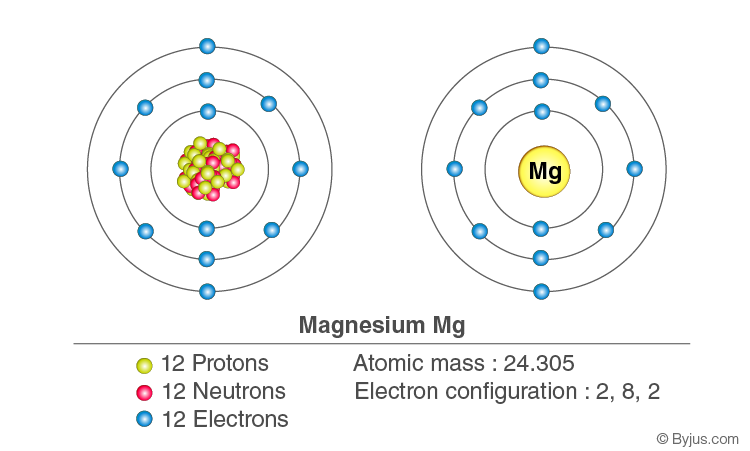 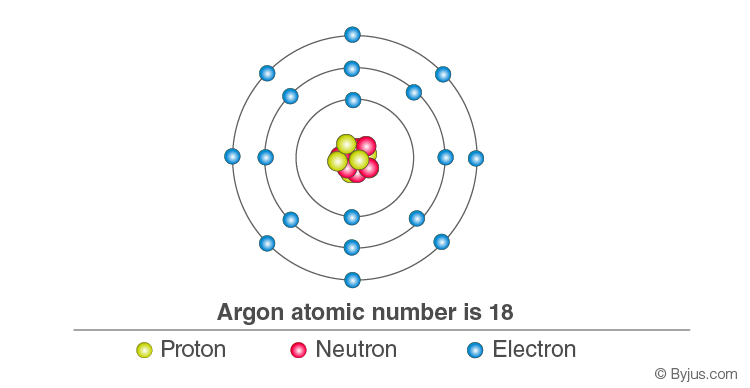 Question 6: Fill in the blanks:

a. Electrons, protons, neutrons are the types of subatomic particles in an atom.

b. An electron carries a negative charge.

c. The electron shell K is nearest to the nucleus.

d. The electronic configuration Magnesium is 2, 8, 2. From this it is understood that the valence shell of Magnesium is M shell.

Question 7: Deduce from the datum provided. 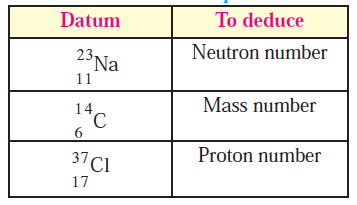 Question 1: What is meant by matter?

Answer: Matter is everything that is around us, such as atoms and compounds are all composed of the smallest parts of matter. Matter is made of molecules which in turn, are formed from atoms.

Answer: The great Indian sage and philosopher, Acharya Kanad (6th century B.C.) stated that there is a limit to divide matter into small particles. He named the indivisible particles that constitute matter as ‘Paramanu’ which means the smallest particles. He also stated that ‘Paramanu’ is indestructible by nature.

Question 3: Who coined the term ‘Atom’?

Answer: The Greek philosopher Democritus who lived in the 5th century B.C. stated that matter is made of very small particles which cannot be divided. Democritus described the smallest particle of matter and named it as ‘Atom’ or ‘Atomos’ which means the one which cannot be cut or divided.

Answer: In 1803 A.D. John Dalton, the British scientist proposed ‘Atomic Theory’. According to this theory, matter is composed of atoms which are indivisible and indestructible. All atoms of an element are alike while different elements have different atoms with different mass.

Answer: Given below are the postulates of Rutherford’s Nuclear atomic model:

1. There is a positively charged nucleus at the centre of an atom.

2. The entire mass of the atom is almost concentrated in the nucleus.

3. The negatively charged particles are called electrons that revolve around the nucleus.

4. The total negative charge on all the electrons is equal to the positive charge on the nucleus. As the opposite charges are balanced the atom is electrically neutral.

5. There is an empty space between the revolving electron and the atomic nucleus.

Question 7: What is the shortcoming of Rutherford’s Nuclear atomic model?

Answer: One of the major shortcomings of Rutherford’s Nuclear atomic model is that it turns out to be unstable. However, in reality, all atoms except the radioactive atoms are stable.

Answer: In 1913 Niels Bohr, a Danish scientist explained the stability of an atom by demonstrating the stable orbit atomic model. The important postulates of Bohr’s atomic model are listed as below:

(i) The electrons that revolve around the atomic nucleus lie in the concentric circular orbit at a certain distance from the nucleus.

(ii) The energy of an electron is constant while it is in a particular circular orbit.

Answer: The nucleus of an atom is positively charged. The entire mass of the atom is almost concentrated in the nucleus. The nucleus contains two types of subatomic particles together which are called nucleons. The two types of nucleons are protons and neutrons.

Answer: Proton is a positively charged subatomic particle in the atomic nucleus. The positive charge on the nucleus is due to the proton in it. A proton is represented by the symbol ‘p’. Each proton carries a positive charge of +1e. (1e = 1.6 × 10-19 coulomb).

Question 11: What is Neutron?

Question 12: What comprises the extranuclear part?

Question 13: What is an electron?

Question 14: What is electronic configuration of an element?

Question 16: What are the uses of Isotopes?

Answer: Some elements have isotopes which are radioactive. They are used in a variety of fields such as agriculture, industry, medicine, research and development.

1. Uranium – 235 is particularly used for production of electricity and nuclear fission.

2. Radioactive isotopes like Cobalt – 60 are used in the medical treatment of life-threatening diseases such as cancer.

3. Iodine -131 is used to treat diseases such as goiter and thyroid gland disorders.

4. The radioactive isotopes are used for detection of cracks or leakage in the underground

5. Radioactive isotopes are used for preserving food from microbes.

6. The radioactive isotope C-14 is used for determining the age of archaeological objects.

Question 17: Give examples of moderators.

Answer: Heavy water or Graphite are used as moderators for reducing the speed of neutrons in an atom in a nuclear reactor.

Question 18: What is a nuclear reactor?

Question 19: What is the function of a controller in a nuclear reactor?

Answer: A controller is used in a nuclear reactor to reduce the number of neutrons by absorbing the rods of boron, cadmium, beryllium, etc.

Question 20: How to control chain reaction in a nuclear reactor?

We hope that the above mentioned solutions of “MSBSHSE Class 8 Science Chapter 5 Inside the Atom” will help students to build a strong and solid foundation of the different concepts mentioned in the chapter.

How can I get Maharashtra State Board Class 8 Science Solutions Chapter 5 Inside the Atom?

Maharashtra State Board Class 8 Science Solutions Chapter 5  Inside the Atom is available as a scrollable PDF format online. We have also provided a clickable link for students to access the solution. Additionally, these questions and the solutions can be found on our webpage.

Maharashtra State Board Class 8 Science Solutions Chapter 5: Why are they important?

How to solve Maharashtra State Board Class 8 Science Solutions Chapter 5?

Students are encouraged to solve these questions first and then refer back to the solutions to get an idea about the answers. They can identify the mistakes and avoid them in the exams. Solving the solutions on time helps them to manage time better also to gauge their exam preparations.