Along with the legislature and the Executive, the judiciary too is an important organ of the government. While the legislature makes the laws and the executive implements the laws, the Judiciary gives justice. In this chapter, we will learn how Judiciary works to give justice and thereby helps in removing injustice in a society and establishes a healthy society. So, to help students, in this article we have provided MSBSHSE Class 8 solutions of Social Science Chapter 4 Civics. These solutions will boost your confidence level and help students score high marks.

Q1. Choose the correct option and complete the statements.

(b) Council of Ministers

(2) The Chief Justice of the Supreme Court is appointed by ……………

Answer 1: Laws are made by Executive.

Answer 2: The Chief Justice of the Supreme Court is appointed by the President.

Answer 1: Civil and Criminal Law – Civil law deals with conflicts which affect or interfere with the rights of a person. For example, Conflicts regarding land and property, rent agreement, divorce, etc. After filing a petition in the relevant court, the said court gives a decision.

Criminal law – Serious crimes are dealt under criminal law. For example, theft, robbery, dowry, murder, etc. In these cases, the first step is to file a First Information Report (FIR) with the Police. The police investigate the matter and then a petition is filed in the court. If the charges are proved, there are provisions for severe punishment.

Answer 2: Judicial Activism – Traditionally, the Courts settle the disputes whenever they are approached for that purpose. In the last few decades, this image of the court has undergone a change and they have become increasingly active. This means that the court now seeks to fulfill the constitutional goals of justice and equality. The court has tried to provide legal protection to the marginalised sections in society, women, tribal, workers, farmers, and children. Public Interest Litigations have played an important role in this regard.

(1) Why are laws necessary in society?

(2) Enumerate the functions of the Supreme Court.

(3) Which are the provisions that preserve the independence of the judiciary?

Answer 1: The Rule of Law is protected by the Judiciary. The law treats everyone equally. Rich, poor, forward-backward, men or women, all are equal before law and this is expressed clearly through judicial decisions. That is why laws are necessary in society.

Answer 2: The functions of the Supreme Court are as follows:

Answer 3: The provisions that preserve the independence of the judiciary are as follows: 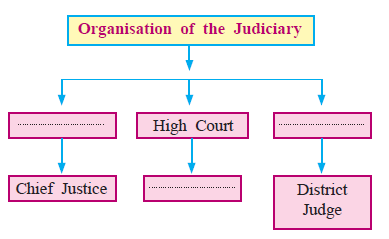 Answer: The functions of High Court are: