MSBSHSE Class 8 Social Science Geography Chapter 1 solutions can be accessed by students from our BYJU’S website. Students can refer to these solutions while solving the textbook questions. Subject matter experts solve these questions after thorough analysis of the chapter. Students should practice MSBSHSE Class 8 solutions of Geography, without fail, to understand how each question is solved. This will help students to score more marks in their exam. It also boosts the confidence level of students.

Q 1. Complete the sentence by selecting the correct option:

(a) The earth requires 24 hours for one rotation. In one hour,

(i) 5 longitudes will face the sun

(ii) 10 longitudes will face the sun

(iii) 15 longitudes will face the sun

(iv) 20 longitudes will face the sun

(b) To calculate the difference between the local times of any two places on the earth,

(i) the noon time at both the places should be known

(ii) the difference in degrees of their longitudes should be known

(iv) Changes need to be made according to International Date Line

Answer a: (iii) 15 longitudes will face the sun

Answer b: (ii) the difference in degrees of their longitudes should be known.

(a) The local time is decided by noon time.

(b) The local time at Greenwich is considered to be the international standard time.

(c) The standard time of India has been decided by the local time at 82.5° E longitude.

Answer b: For an international coordination between countries, the local time at Greenwich (Greenwich Mean Time) in England is considered to be the international standard time. The difference in standard times of various countries is calculated with reference to GMT. The Indian Standard Time is 5 hours 30 minutes ahead of GMT. If it is 5 p.m. at Greenwich then in India it would be 10.30 p.m.

Answer c: The Indian Standard Time (IST) has been decided according to the 82° 30′ E longitude, which passes through Mirzapur (near Allahabad, Uttar Pradesh). This longitude passes through the middle of the country with reference to its longitudinal extent. The local time at this longitude has been selected as the standard time of the whole country. When the sun is directly overhead on this longitude, then it is assumed that it is 12 noon everywhere in India. There is no difference of more than one hour between the local time at 82° 30′ E and other places in the country.

Answer d: The size of the country is so big that it spans 90 degrees of longitude. Hence, there are six different time zones in Canada. They are referred to as Eastern Daylight Time. They are

(b) How is the standard time of a place determined?

c) A football match being played in São Paulo, Brazil started in India at 6 am IST. Explain what would be the local time in São Paulo?

Answer b: The local time at the longitude, which generally passes through the middle of the country is deemed to be the standard time in that country. This standard time is used all over the country. With respect to businesses at global level, there should be compatibility between the standard times of various countries. To facilitate this, the world has been divided into 24 time zones. These time zones have been created with reference to the Prime Meridian itself.

Answer c: When a football match starts in São Paulo, Brazil, and it is 6 am as per Indian Standard Time in India then it will be 9.30 pm, the previous day in São Paulo, Brazil. The reason for this time difference is that India is 8 hours 30 minutes ahead of São Paulo.

Q 5. Write the situations of place A shown in these diagrams in the boxes below them: 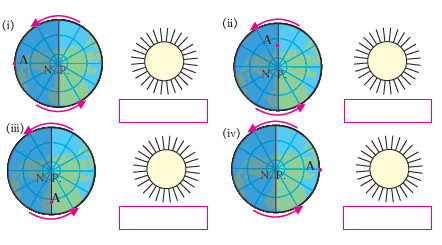