MSBSHSE Class 8 Social Science Geography Chapter 2 solutions are the most popular study materials used by the students while preparing for exam. These solutions cover all the crucial topics mentioned in the chapter. It also helps the students to get familiar with answering questions of all difficulty levels. These MSBSHSE Class 8 solutions of Social Science Geography Chapter 2 will help students to face their board exams with confidence.

Q 1. Tick the correct options in the box

(A) There are two layers in the crust.

(i) Inner and outer crust

(B) Which element is found in both mantle and crust?

(C) Which of these minerals are found in the core of the earth?

(D) The inner core is in which state?

(E) The outer core is made up of

(F) The layer of the earth on which we live.

(G) Which seismic waves can travel through liquid medium?

Answer B: (i) Silica

Q 2. Tell whether right or wrong. Correct the wrong statement

(A) The density of various materials is not the same in the interior of the earth.

(D) Continental crust is made up of silica and magnesium

Answer A: The statement is right.

Answer C: The statement is right.

Answer D: The statement is wrong because Continental crust is made up of silica and aluminium.

(A) What are the two parts of the crust? What is the basis of classification?

(B) Why is the upper mantle called the asthenosphere?

(C) Magnetosphere of the earth is a result of rotation. Explain.

Answer A: The uppermost layer of the earth’s surface is in solid state and is called the crust. The two parts of the crust are Oceanic Crust and Continental Crust. Oceanic Crust is the second layer of the crust. It is made up of silica and magnesium. It was earlier called Sima. Continental Crust continents are mainly composed of Silica and Aluminum. Because of their high proportion in this layer, the layer was earlier known as Sial.

Answer B: The upper layer of the Mantle is more in liquid state. Here, one finds magma chambers. It is through these chambers that magma comes out on the earth’s surface during volcanic eruptions. This layer is also known as asthenosphere. Epicenters of deep-seated earthquakes are usually found here.

(A) The interior of the earth

(B) Magnetic pole and equator 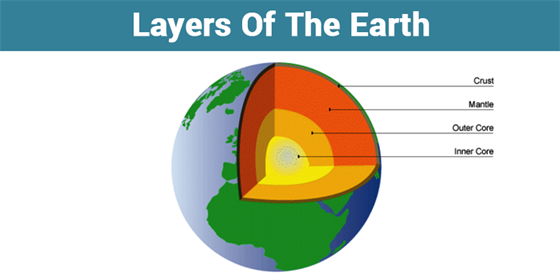 (A) There are discontinuities in the interior of the earth.

(B) There is a correlation between the density of metals and their location in the interior of the earth.

(C) Mantle is the centre of earthquake and volcanic eruptions.

(D) The thickness of the crust below the continents is less as compared to oceans.

(E) Earth is protected because of the magnetosphere.

Answer B: As we go deeper inside the earth, the pressure increases. The lithosphere is made of silica and aluminium (SIAL) and silica and magnesium (SIMA). They are solid but not very dense. Then comes the outer mantle, it is made of solid rocks which are denser than SIAL and SIMA. The inner mantle is hotter and denser than the outer mantle. The core is made up of Nickel and Iron. Outer core is in molten state due to high temperature. The outer core is in solid state due to the extremely high pressure.

Answer C: Below the crust lies the mantle. Mantle can be divided into two layers: upper and lower mantle. The upper layer is more in liquid state. Here, one finds magma chambers. It is through these chambers that magma comes out on the earth’s surface during volcanic eruptions. This layer is also known as asthenosphere. Epicenters of deep seated earthquakes are usually found here. Mantle begins at a depth of around 42km from the earth’s surface.

Why use Maharashtra Board Class 8 Social Science Solutions Geography Chapter 2 to prepare for the exams?

These questions act as a perfect guide for Class 8 students during their final exam preparation as it is created by qualified subject teachers, as per the latest Class 8 Social Science Geography Syllabus. Students can discover various solved questions and exercises that will aid them to prepare well for board exams. Students can identify the mistakes early on and avoid making any in the exams. This is also a good tool to gauge one’s performance, exam preparation level and time management skills.

Yes, students can easily download the solutions from the link given. And these solutions and questions are also provided online on the webpage.

Are these Maharashtra Board Class 8 Social Science Solutions Geography Chapter 2 useful for students?

Yes, these solutions are very useful. Students are advised to practise solving these solutions after revising the chapter, as they may form the basis for the questions that are asked in the board exams.