NCERT Exemplar Chemistry Class 11 Chapter 1 Some Basic Concepts of Chemistry is essential to study for students to score good marks in Class 11 and entrance examinations. Students are advised to get well versed with this exemplar solutions. NCERT Exemplar Class 11 Chemistry Chapter 1 has important questions with answers, exercise solution, numerical, MCQs HOTS, worksheets, and questions from previous year question papers and sample papers. Chemistry is one of the interesting science subjects that students can have fun with. However, this subject is not always easy and can be a bit confusing due to the introduction of a lot of new concepts, theories, equations, formulas, and more.

While each topic in chemistry advances from one level to another, in Chapter 1 of Class 11 Chemistry textbook students will mainly study the development and importance of Chemistry. To facilitate easy learning and to help students in getting a clear idea about the topics given in this chapter, we are offering free NCERT Exemplars for Class 11 Chemistry Chapter 1 – some basic concepts of chemistry here. The NCERT Exemplar has been prepared by experts and provides answers to all the questions based on topics like matter, molecular and atomic mass, laws of chemical composition, and more. The exemplar will not only help students understand all the topics clearly but they will be able to get an insight into all the important topics or questions. 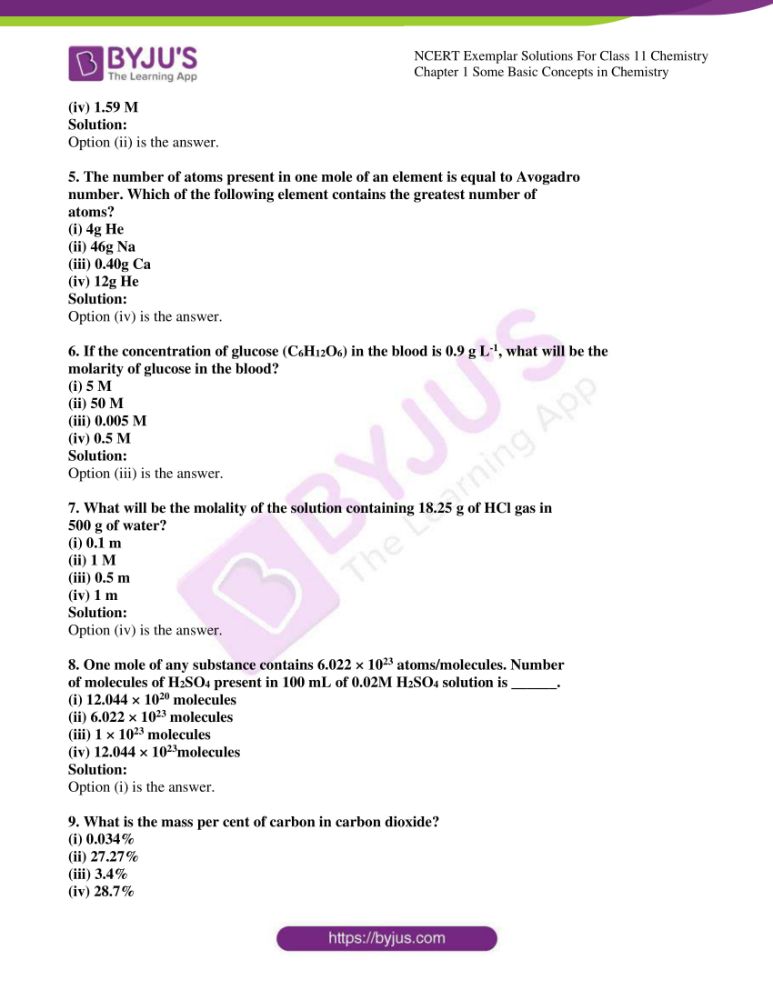 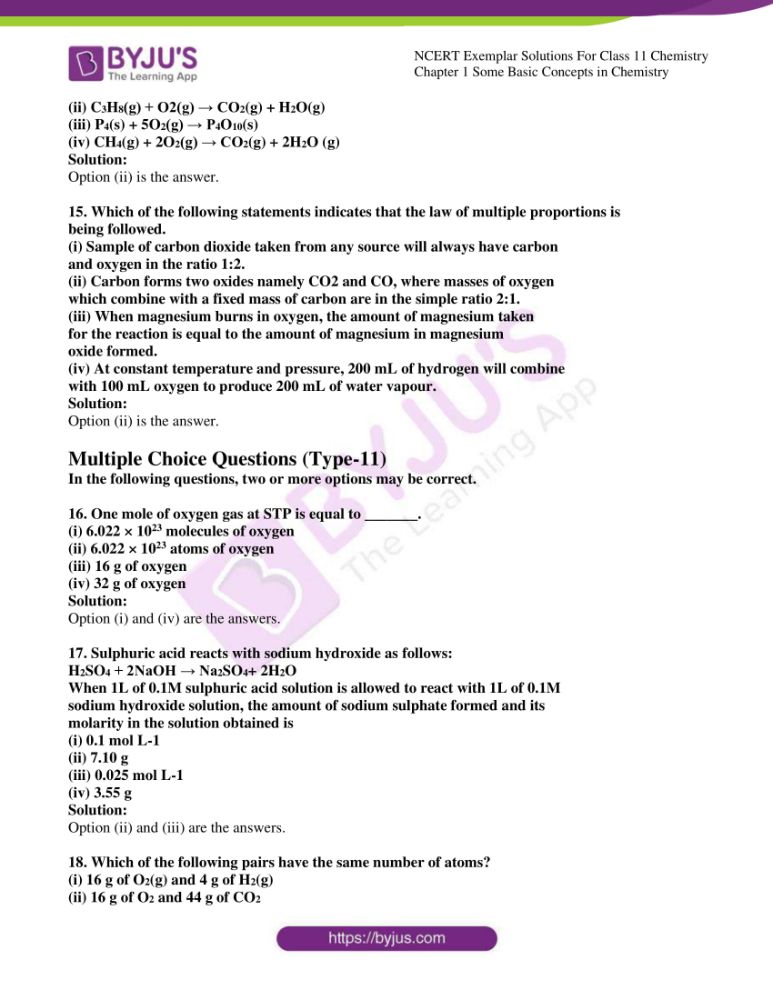 1. Two students performed the same experiment separately and each one of

them recorded two readings of mass which are given below. The correct reading

of mass is 3.0 g. Based on given data, mark the correct option out of the

(i) Results of both the students are neither accurate nor precise.

(ii) Results of student A are both precise and accurate.

(iii) Results of student B are neither precise nor accurate.

(iv) Results of student B are both precise and accurate.

2. A measured temperature on the Fahrenheit scale is 200 °F. What will this reading

be on a Celsius scale?

3. What will be the molarity of a solution, which contains 5.85 g of NaCl(s) per

5. The number of atoms present in one mole of an element is equal to Avogadro

number. Which of the following element contains the greatest number of

molarity of glucose in the blood?

7. What will be the molality of the solution containing 18.25 g of HCl gas in

9. What is the mass per cent of carbon in carbon dioxide?

10. The empirical formula and molecular mass of a compound are CH2O and

180 g respectively. What will be the molecular formula of the compound?

12. Which of the following statements about a compound is incorrect?

(i) A molecule of a compound has atoms of different elements.

(ii) A compound cannot be separated into its constituent elements by

(iii) A compound retains the physical properties of its constituent elements.

(iv) The ratio of atoms of different elements in a compound is fixed.

13. Which of the following statements is correct about the reaction given below:

oxygen in product therefore it follows the law of conservation of mass.

(iron or oxygen) in excess.

reactants (iron or oxygen) is taken in excess.

14. Which of the following reactions is not correct according to the law of

15. Which of the following statements indicates that the law of multiple proportions is

which combine with a fixed mass of carbon are in the simple ratio 2:1.

(iii) When magnesium burns in oxygen, the amount of magnesium taken

(iv) At constant temperature and pressure, 200 mL of hydrogen will combine

When 1L of 0.1M sulphuric acid solution is allowed to react with 1L of 0.1M

sodium hydroxide solution, the amount of sodium sulphate formed and its

molarity in the solution obtained is

18. Which of the following pairs have the same number of atoms?

19. Which of the following solutions have the same concentration?

20. 16 g of oxygen has the same number of molecules as in

22. One of the statements of Dalton’s atomic theory is given below:

Which of the following laws is not related to this statement?

(i) Law of conservation of mass

24. How many significant figures should be present in the answer to the following

Two significant figures should be present in this.

Since the least number of significant figures from the given figure is 2 (in 2.5 and 3.5).

25. What is the symbol for the SI unit of a mole? How is the mole defined?

The symbol for the SI unit of the mole is mol. A mole is defined as the amount of substance that contains as many entities as there are atoms in 12g carbon.

26. What is the difference between molality and molarity?

27. Calculate the mass percent of calcium, phosphorus and oxygen in calcium

oxide was formed. The reaction is given below:

Which law is being obeyed in this experiment? Write the statement of the law?

The above experiment proves Gay-Lussac’s law which states that gases combine or produced in a chemical reaction in a simple whole-number ratio by volume provided that all gases are the same temperature and pressure.

29. If two elements can combine to form more than one compound, the masses of

one element that combine with a fixed mass of the other element, are in whole-number ratio.

(a) Is this statement true?

(b) If yes, according to which law?

(c) Give one example related to this law.

(a) Yes, the statement is true.

(b) According to the law of multiple proportions

Masses of oxygen which combine the fixed mass of hydrogen are in the ratio 16:32 or 1

31. Hydrogen gas is prepared in the laboratory by reacting dilute HCl with

Calculate the volume of hydrogen gas liberated at STP when 32.65 g of zinc

reacts with HCl. 1 mol of a gas occupies 22.7 L volume at STP; atomic mass of

From the above equation,

33. The volume of a solution changes with change in temperature, then, will the molality

of the solution be affected by temperature? Give a reason for your answer.

35. The reactant which is entirely consumed in the reaction is known as limiting reagent.

(i) which is the limiting reagent?

(i) B will be the limiting reagent as it gives a lesser amount of product.

(ii) Let B is completely consumed

In the following questions, a statement of Assertion (A) followed by a

statement of Reason (R) is given. Choose the correct option out of the

choices are given below each question.

38. Assertion (A): The empirical mass of ethene is half of its molecular mass.

the ratio of various atoms present in a compound.

39. Assertion (A): One atomic mass unit is defined as one-twelfth of the mass of

Reason (R): Carbon-12 isotope is the most abundant isotope of carbon

and has been chosen as the standard.

(ii) Both A and R are true but R is not the correct explanation of A.

Option (ii) is correct. Carbon-12 is considered a standard for defining the atomic and molecular mass.

Reason (R): Zero at the end or right of a number are significantly provided

they are not on the right side of the decimal point.

(ii) Both A and R are true but R is not a correct explanation of A.

Zero at the end of a number without decimal point may or may not be significant depending on the accuracy of the measurement.

Reason (R): In the combustion of methane, water is one of the products.

(i) Both A and R are true but R is not the correct explanation of A.

16g of CH4 on complete combustion will give 36g of water.

gas is now transferred to another vessel at a constant temperature, where

the pressure becomes half of the original pressure. Calculate

(i) the volume of the new vessel.

(ii) a number of molecules of dioxygen.

43. Calcium carbonate reacts with aqueous HCl to give CaCl2 and CO2 according

to the reaction given below:

1000 g of CaCO3? Name the limiting reagent. Calculate the number of moles

of CaCl2 formed in the reaction.

1. When CaCO3 is completely consumed

2. When HCl is completely consumed.

HCl will be the limiting reagent and the number of moles of CaCl2 formed will be 0.095mol

44. Define the law of multiple proportions. Explain it with two examples. How

does this law point to the existence of atoms?

When two elements combine to form two or more chemical compounds, then the masses of one of the elements which combine with a fixed mass of the other bear a simple ratio to one another is the law of multiple proportions.

For example, carbon combines with oxygen to form two compounds they are carbon dioxide and carbon monoxide

The masses of oxygen which combine with a fixed mass of carbon in carbon dioxide and carbon monoxide are 32 and 16. Therefore oxygen bear: 32:16 ratio or 2:1

45. A box contains some identical red coloured balls, labelled as A, each weighing

and show that the law of multiple proportions is applicable.

This is the simple whole-number ratio.

What concepts can I learn using the NCERT Exemplar Solutions for Class 11 Chemistry Chapter 1?

By using the NCERT Exemplar Solutions for Class 11 Chemistry Chapter 1, you can learn about concepts like –
1. Importance Of Chemistry
2. Nature of matter
3. Properties Of Matter And Their Measurement
4. Uncertainty In Measurement
5. Laws Of Chemical Combinations
6. Dalton’s Atomic Theory
7. Atomic And Molecular Masses
8.Mole Concept And Molar Masses
9. Percentage Composition
10. Empirical Formula For Molecular Formula
11. Stoichiometry And Stoichiometric Calculations

Explain the concept of law of definite proportions of NCERT Exemplar Solutions for Class 11 Chemistry?

The law of constant proportions states that chemical compounds are made up of elements that are present in a fixed ratio by mass. This implies that any pure sample of a compound, no matter the source, will always consist of the same elements that are present in the same ratio by mass. The law of constant proportions is often referred to as Proust’s law or as the law of definite proportions. The NCERT Exemplar Solutions act as a major source of reference material for the Class 11 students from the exam perspective. The solutions are student friendly and help students to get a grip on the important concepts.

List out the postulates of Dalton’s Atomic Theory discussed in the Chapter 1 of NCERT Exemplar Solutions for Class 11 Chemistry.

Postulates of Dalton’s Atomic Theory
1. All matter is made up of tiny, indivisible particles called atoms.
2. All atoms of a specific element are identical in mass, size, and other properties. However, atoms of different elements exhibit different properties and vary in mass and size.
3. Atoms can neither be created nor destroyed. Furthermore, atoms cannot be divided into smaller particles.
4. Atoms of different elements can combine with each other in fixed whole-number ratios in order to form compounds.
5. Atoms can be rearranged, combined, or separated in chemical reactions.