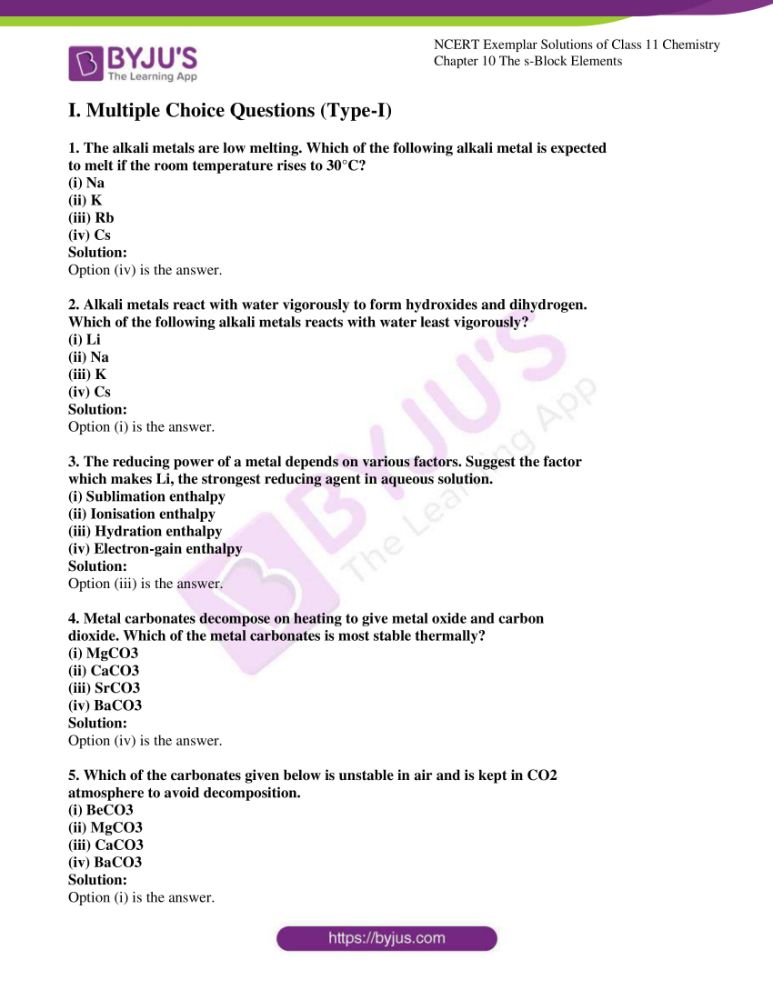 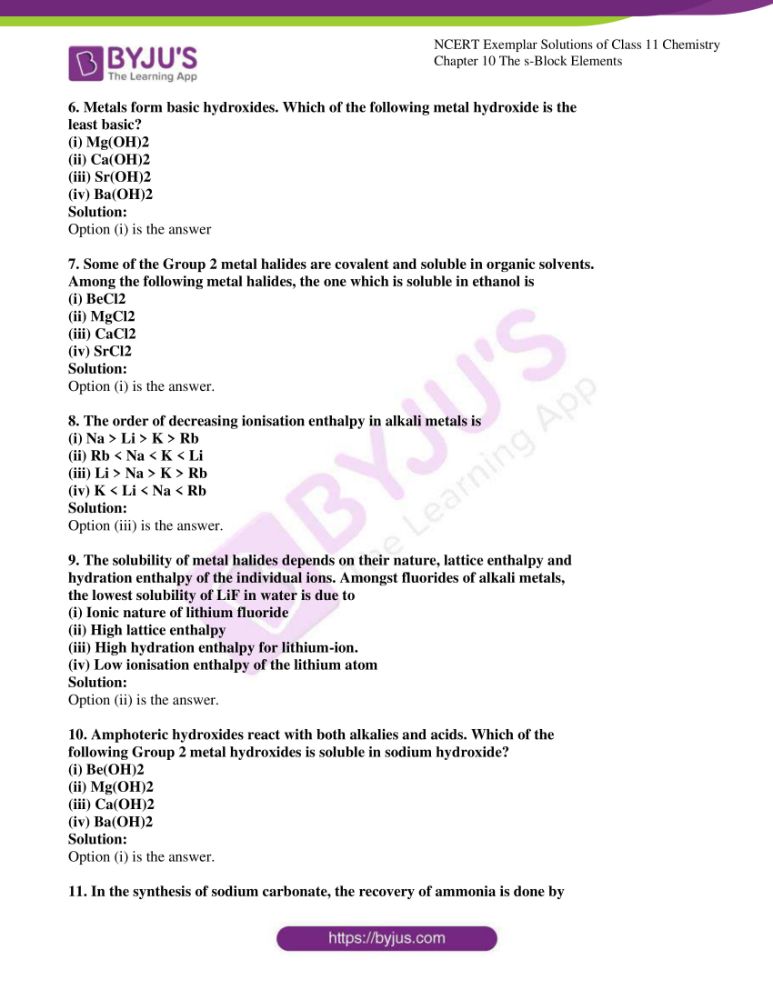 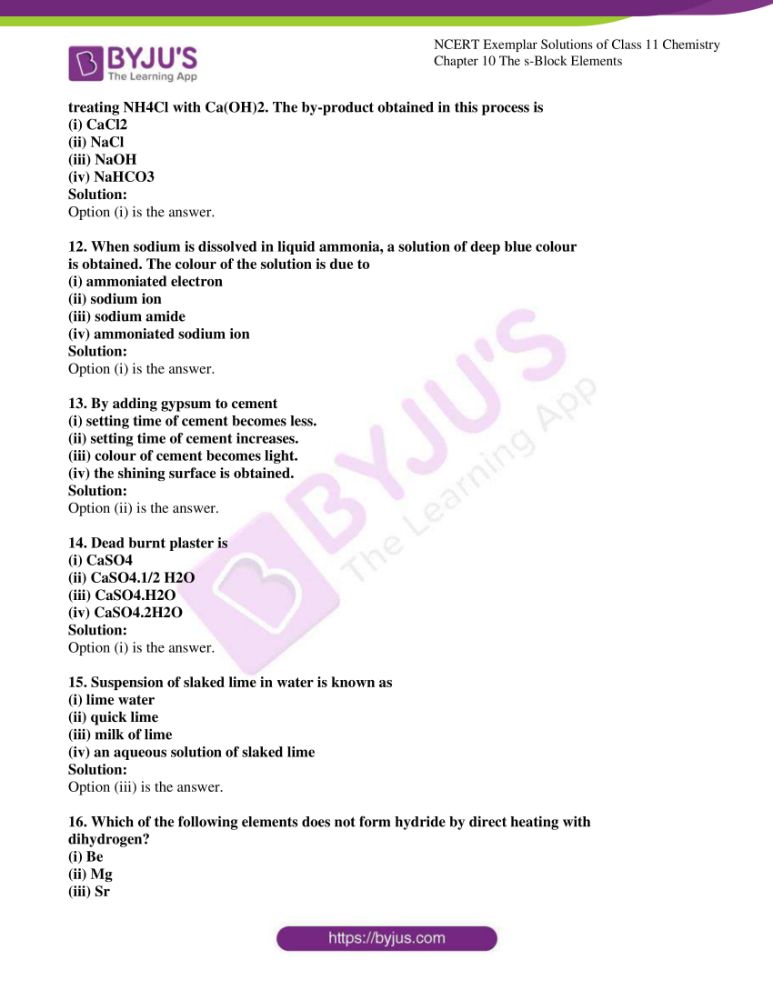 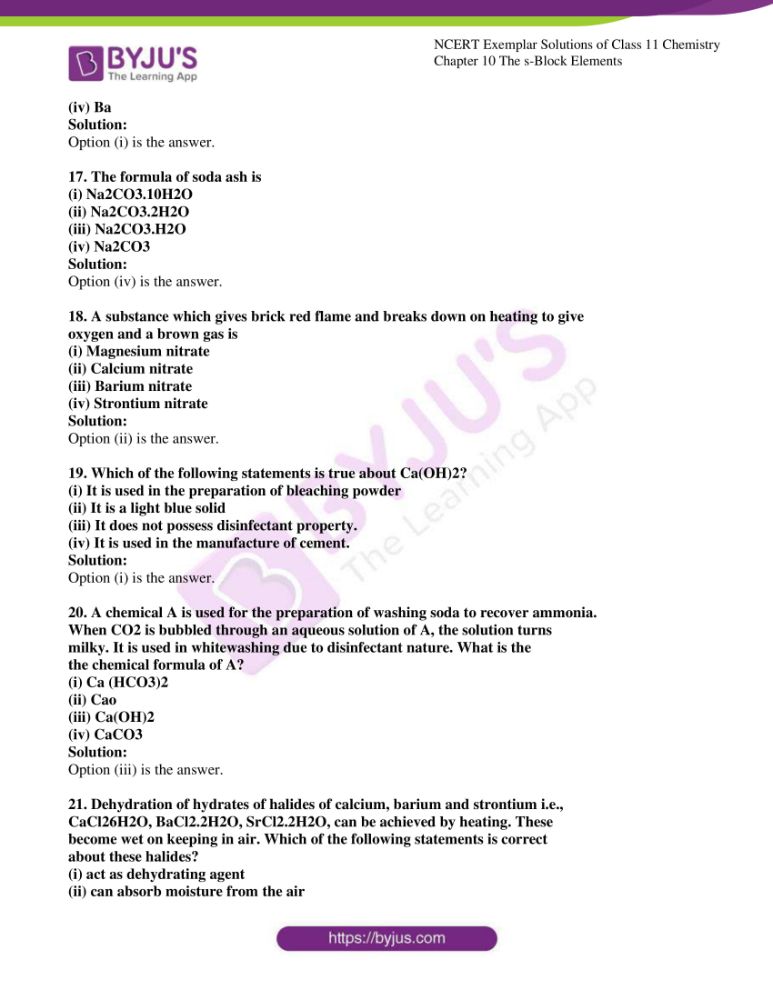 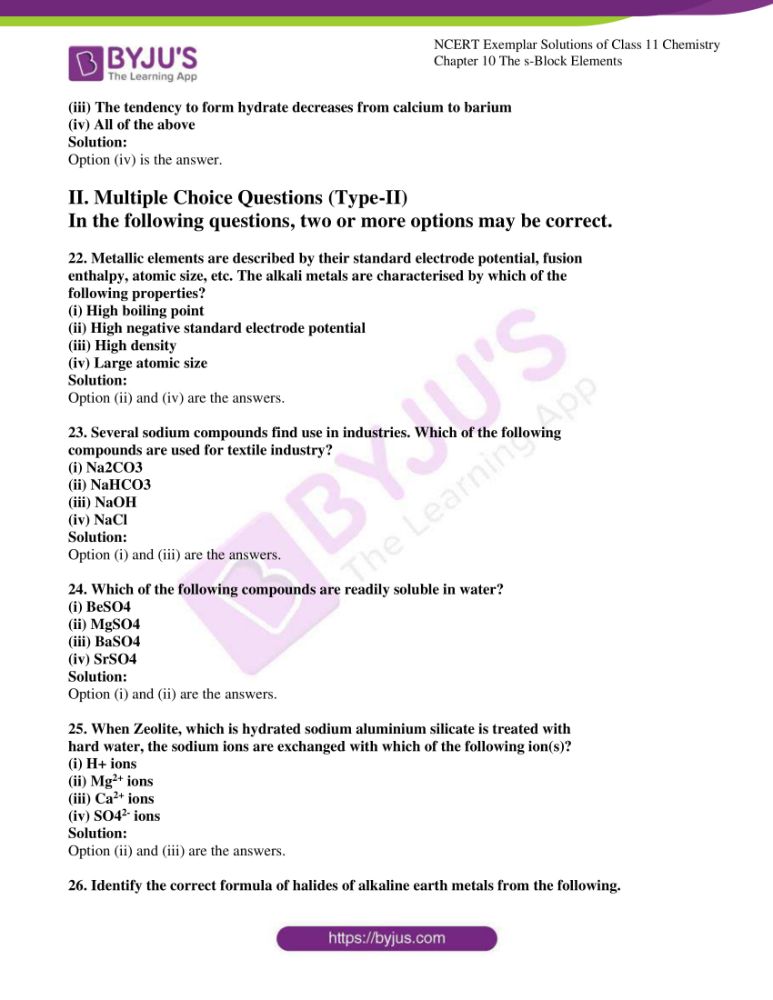 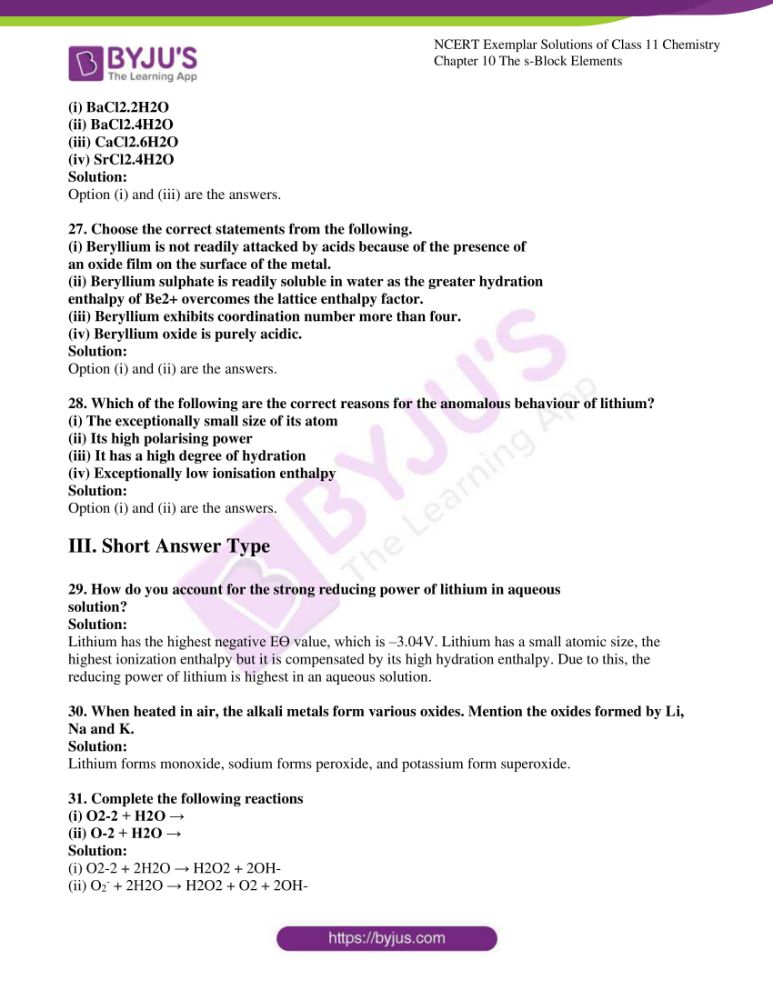 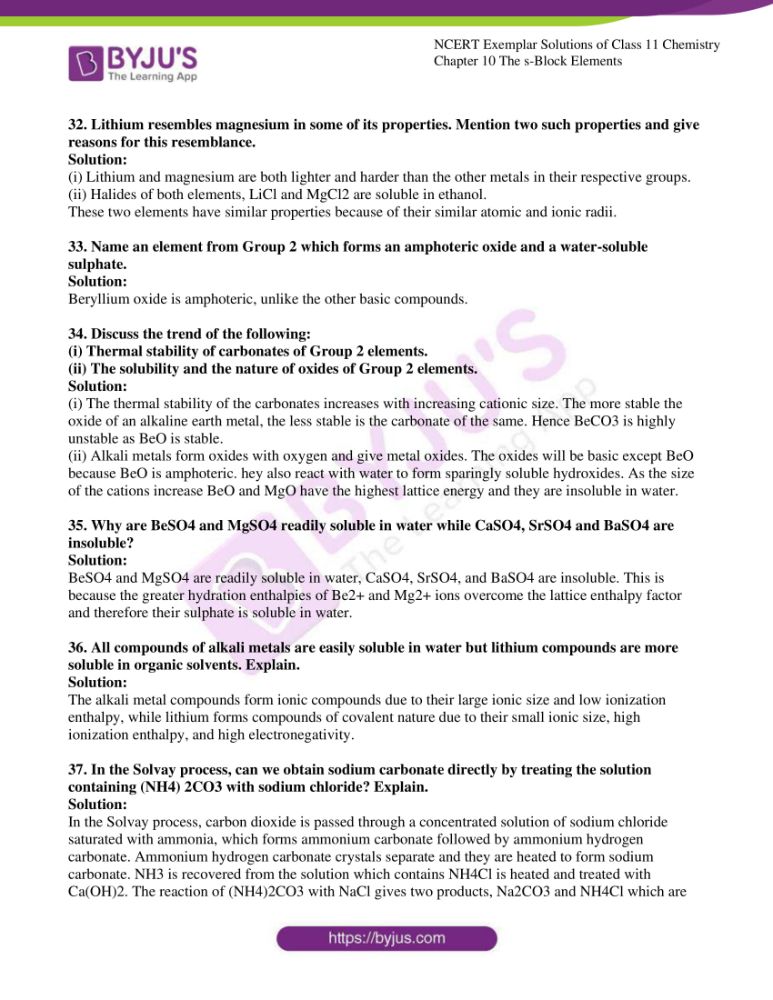 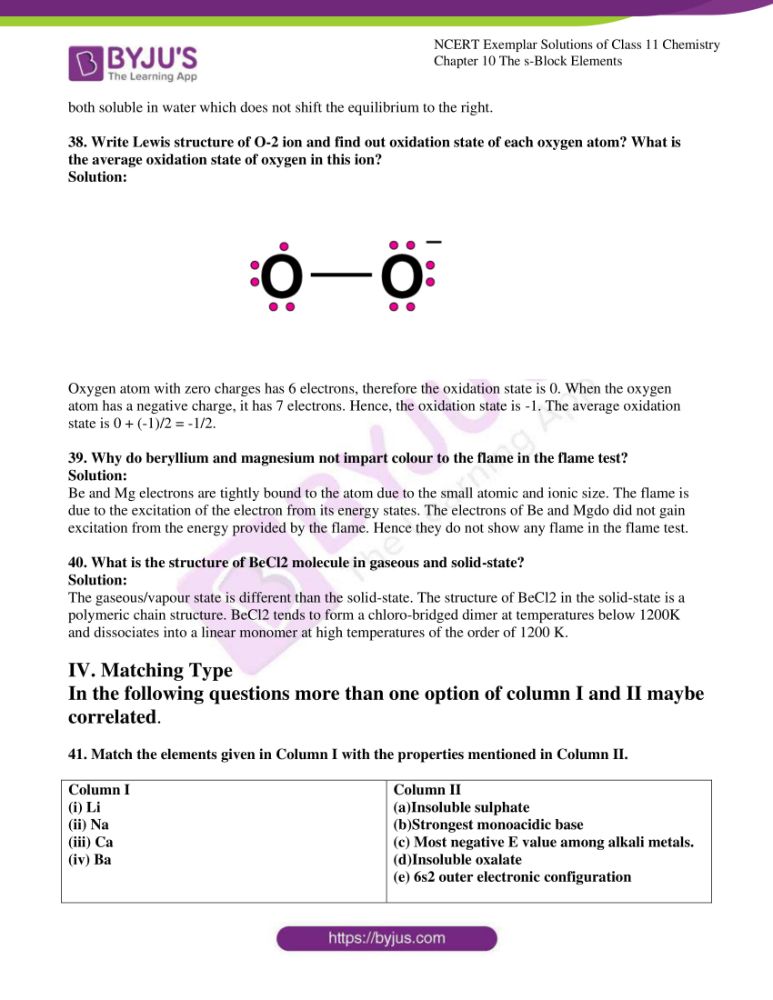 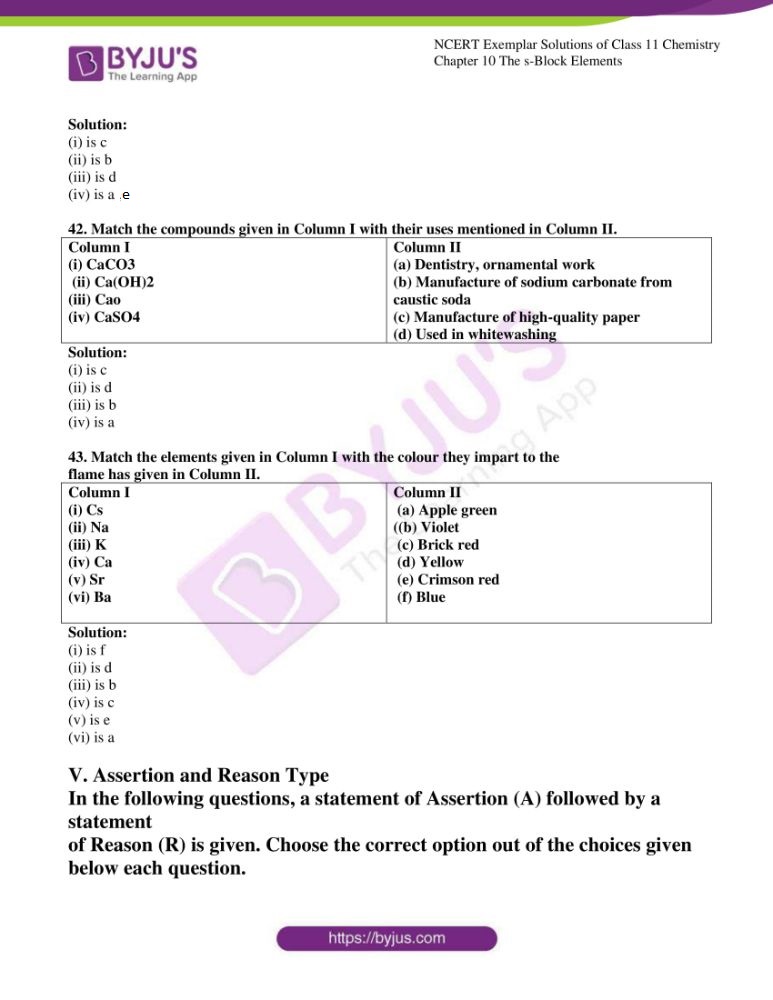 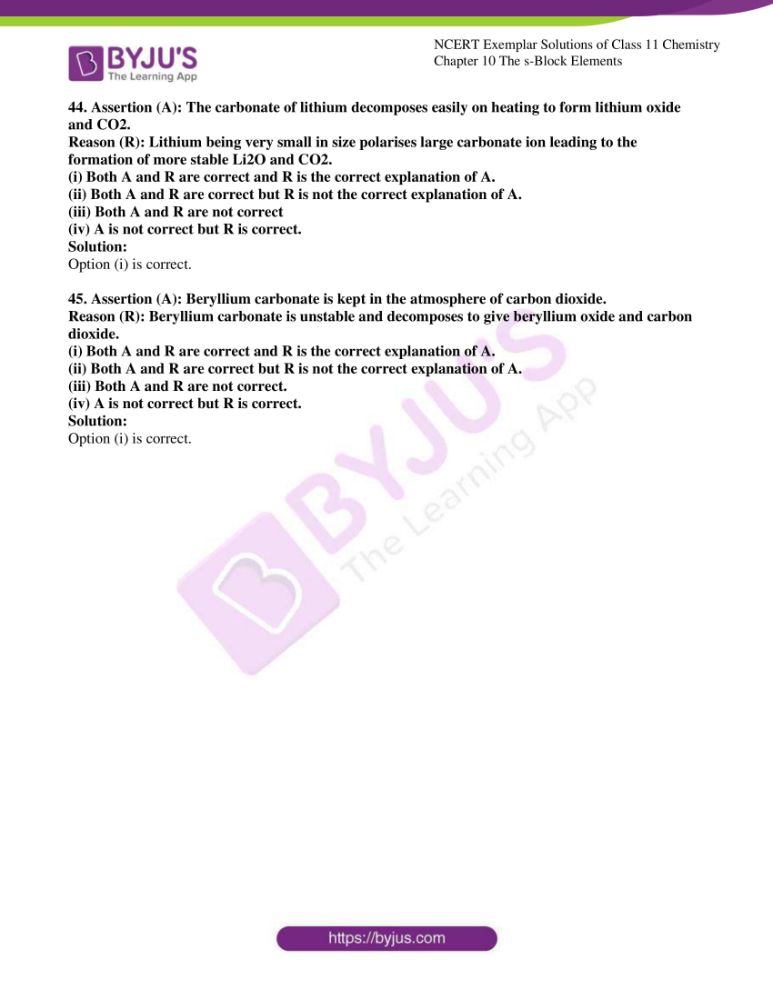 to melt if the room temperature rises to 30°C?

Which of the following alkali metals reacts with water least vigorously?

3. The reducing power of a metal depends on various factors. Suggest the factor

which makes Li, the strongest reducing agent in aqueous solution.

4. Metal carbonates decompose on heating to give metal oxide and carbon

dioxide. Which of the metal carbonates is most stable thermally?

5. Which of the carbonates given below is unstable in air and is kept in CO2

6. Metals form basic hydroxides. Which of the following metal hydroxide is the

7. Some of the Group 2 metal halides are covalent and soluble in organic solvents.

Among the following metal halides, the one which is soluble in ethanol is

8. The order of decreasing ionisation enthalpy in alkali metals is

9. The solubility of metal halides depends on their nature, lattice enthalpy and

hydration enthalpy of the individual ions. Amongst fluorides of alkali metals,

the lowest solubility of LiF in water is due to

(i) Ionic nature of lithium fluoride

10. Amphoteric hydroxides react with both alkalies and acids. Which of the

11. In the synthesis of sodium carbonate, the recovery of ammonia is done by

treating NH4Cl with Ca(OH)2. The by-product obtained in this process is

12. When sodium is dissolved in liquid ammonia, a solution of deep blue colour

is obtained. The colour of the solution is due to

13. By adding gypsum to cement

(iv) the shining surface is obtained.

15. Suspension of slaked lime in water is known as

16. Which of the following elements does not form hydride by direct heating with

17. The formula of soda ash is

18. A substance which gives brick red flame and breaks down on heating to give

oxygen and a brown gas is

19. Which of the following statements is true about Ca(OH)2?

(i) It is used in the preparation of bleaching powder

(ii) It is a light blue solid

(iii) It does not possess disinfectant property.

(iv) It is used in the manufacture of cement.

20. A chemical A is used for the preparation of washing soda to recover ammonia.

When CO2 is bubbled through an aqueous solution of A, the solution turns

milky. It is used in whitewashing due to disinfectant nature. What is the

the chemical formula of A?

21. Dehydration of hydrates of halides of calcium, barium and strontium i.e.,

become wet on keeping in air. Which of the following statements is correct

(i) act as dehydrating agent

(ii) can absorb moisture from the air

(iii) The tendency to form hydrate decreases from calcium to barium

(iv) All of the above

22. Metallic elements are described by their standard electrode potential, fusion

enthalpy, atomic size, etc. The alkali metals are characterised by which of the

23. Several sodium compounds find use in industries. Which of the following

compounds are used for textile industry?

24. Which of the following compounds are readily soluble in water?

25. When Zeolite, which is hydrated sodium aluminium silicate is treated with

hard water, the sodium ions are exchanged with which of the following ion(s)?

26. Identify the correct formula of halides of alkaline earth metals from the following.

27. Choose the correct statements from the following.

an oxide film on the surface of the metal.

enthalpy of Be2+ overcomes the lattice enthalpy factor.

28. Which of the following are the correct reasons for the anomalous behaviour of lithium?

(i) The exceptionally small size of its atom

(iii) It has a high degree of hydration

29. How do you account for the strong reducing power of lithium in aqueous

30. When heated in air, the alkali metals form various oxides. Mention the oxides formed by Li, Na and K.

32. Lithium resembles magnesium in some of its properties. Mention two such properties and give reasons for this resemblance.

(i) Lithium and magnesium are both lighter and harder than the other metals in their respective groups.

(ii) Halides of both elements, LiCl and MgCl2 are soluble in ethanol.

These two elements have similar properties because of their similar atomic and ionic radii.

33. Name an element from Group 2 which forms an amphoteric oxide and a water-soluble sulphate.

Beryllium oxide is amphoteric, unlike the other basic compounds.

34. Discuss the trend of the following:

(i) Thermal stability of carbonates of Group 2 elements.

(ii) The solubility and the nature of oxides of Group 2 elements.

(i) The thermal stability of the carbonates increases with increasing cationic size. The more stable the oxide of an alkaline earth metal, the less stable is the carbonate of the same. Hence BeCO3 is highly unstable as BeO is stable.

(ii) Alkali metals form oxides with oxygen and give metal oxides. The oxides will be basic except BeO because BeO is amphoteric. hey also react with water to form sparingly soluble hydroxides. As the size of the cations increase BeO and MgO have the highest lattice energy and they are insoluble in water.

35. Why are BeSO4 and MgSO4 readily soluble in water while CaSO4, SrSO4 and BaSO4 are insoluble?

BeSO4 and MgSO4 are readily soluble in water, CaSO4, SrSO4, and BaSO4 are insoluble. This is because the greater hydration enthalpies of Be2+ and Mg2+ ions overcome the lattice enthalpy factor and therefore their sulphate is soluble in water.

36. All compounds of alkali metals are easily soluble in water but lithium compounds are more soluble in organic solvents. Explain.

37. In the Solvay process, can we obtain sodium carbonate directly by treating the solution containing (NH4) 2CO3 with sodium chloride? Explain.

In the Solvay process, carbon dioxide is passed through a concentrated solution of sodium chloride saturated with ammonia, which forms ammonium carbonate followed by ammonium hydrogen carbonate. Ammonium hydrogen carbonate crystals separate and they are heated to form sodium carbonate. NH3 is recovered from the solution which contains NH4Cl is heated and treated with Ca(OH)2. The reaction of (NH4)2CO3 with NaCl gives two products, Na2CO3 and NH4Cl which are both soluble in water which does not shift the equilibrium to the right.

39. Why do beryllium and magnesium not impart colour to the flame in the flame test?

Be and Mg electrons are tightly bound to the atom due to the small atomic and ionic size. The flame is due to the excitation of the electron from its energy states. The electrons of Be and Mgdo did not gain excitation from the energy provided by the flame. Hence they do not show any flame in the flame test.

40. What is the structure of BeCl2 molecule in gaseous and solid-state?

41. Match the elements given in Column I with the properties mentioned in Column II.

42. Match the compounds given in Column I with their uses mentioned in Column II.

43. Match the elements given in Column I with the colour they impart to the

flame has given in Column II.

of Reason (R) is given. Choose the correct option out of the choices given

44. Assertion (A): The carbonate of lithium decomposes easily on heating to form lithium oxide and CO2.

(iii) Both A and R are not correct

45. Assertion (A): Beryllium carbonate is kept in the atmosphere of carbon dioxide.

Reason (R): Beryllium carbonate is unstable and decomposes to give beryllium oxide and carbon dioxide.

(iii) Both A and R are not correct.

List out the sub topics covered in the Chapter 10 of NCERT Exemplar Solutions for Class 11 Chemistry.

The sub topics covered in the Chapter 10 of NCERT Exemplar Solutions for Class 11 Chemistry are –
Group 1 Elements: Alkali Metals
General Characteristics Of The Compounds Of The Alkali Metals
Oxides And Hydroxides
Halides
Salts Of Oxo-acids
Anomalous Properties Of Lithium
Some Important Compounds Of Sodium
Biological Importance Of Sodium And Potassium
Group 2 Elements : Alkaline Earth Metals
General Characteristics Of Compounds Of The Alkaline Earth Metals
Anomalous Behaviour Of Beryllium
Some Important Compounds Of Calcium
Biological Importance of Magnesium And Calcium.

How does the NCERT Exemplar Solutions for Class 11 Chemistry Chapter 10 PDF help students?

The Chapter 10 of NCERT Exemplar Solutions for Class 11 Chemistry revolves around the group 1 elements: alkali metals, general characteristics of the compounds Of The alkali metals, oxides and hydroxides. The solutions are curated by the experienced faculty at BYJU’S as per the CBSE guidelines and exam pattern. By using the solutions PDF, students can understand the concepts better and score well in the board exams. The PDF format of solutions can be downloaded by the students and used while answering the questions from the NCERT Exemplar textbook.

Why should I refer to the NCERT Exemplar Solutions for Class 11 Chemistry Chapter 10?

The Chapter 10 of the NCERT Exemplar Solutions for Class 11 Chemistry deals with group 1 elements: alkali metals, general characteristics of the compounds Of The alkali metals, oxides and hydroxides. The solution provides students with a clear idea of the group 2 elements : alkaline earth metals, general characteristics of compounds of the alkaline earth metals
and anomalous behaviour. By referring to these solutions, students will be able to find some important compounds of calcium and the biological Importance of Magnesium and Calcium.