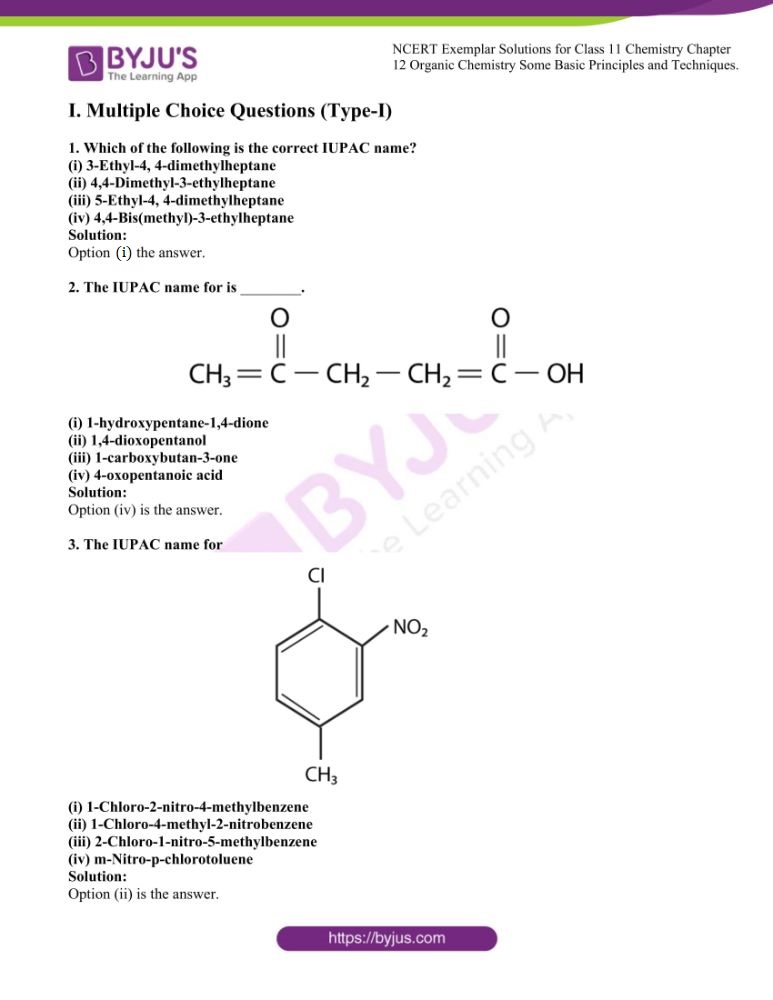 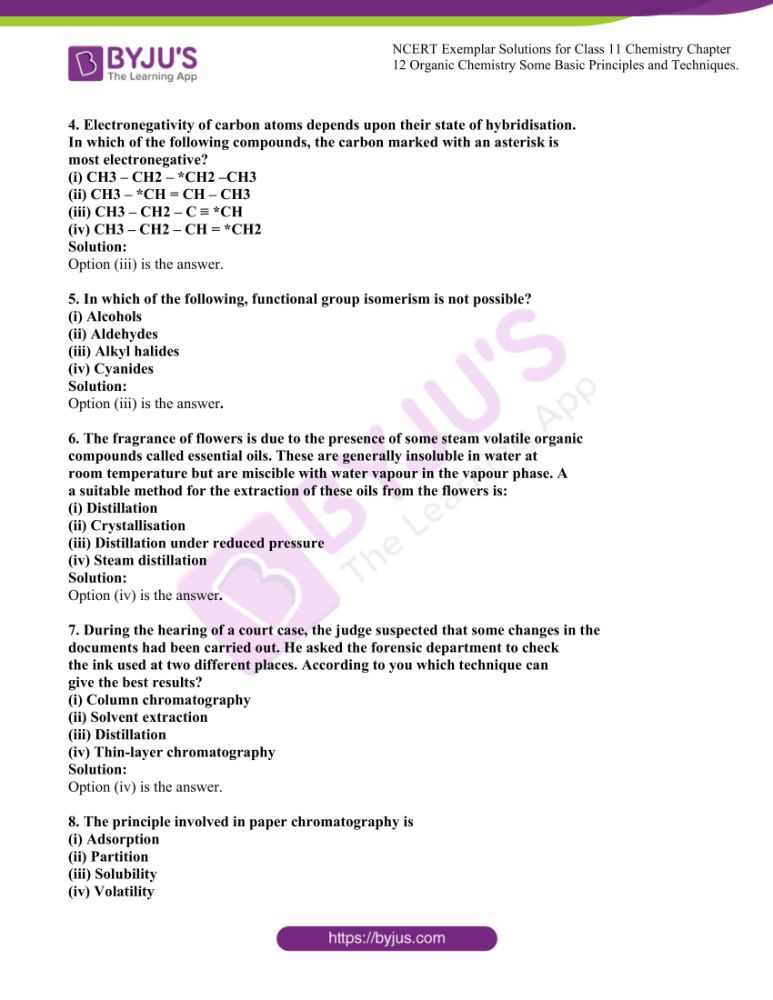 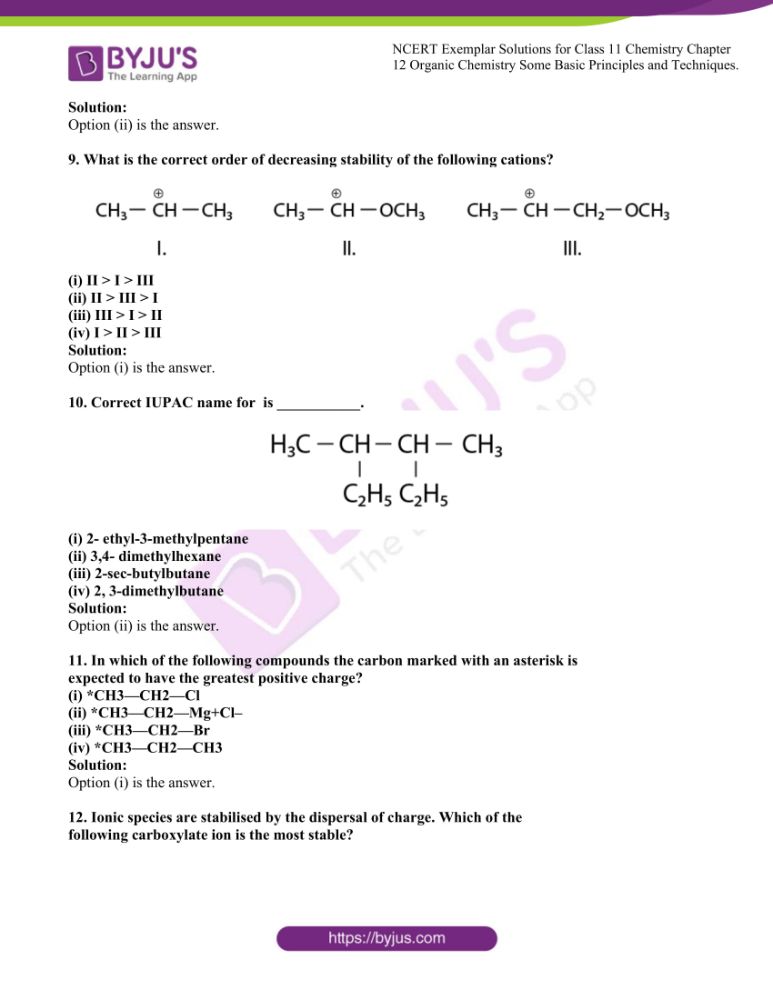 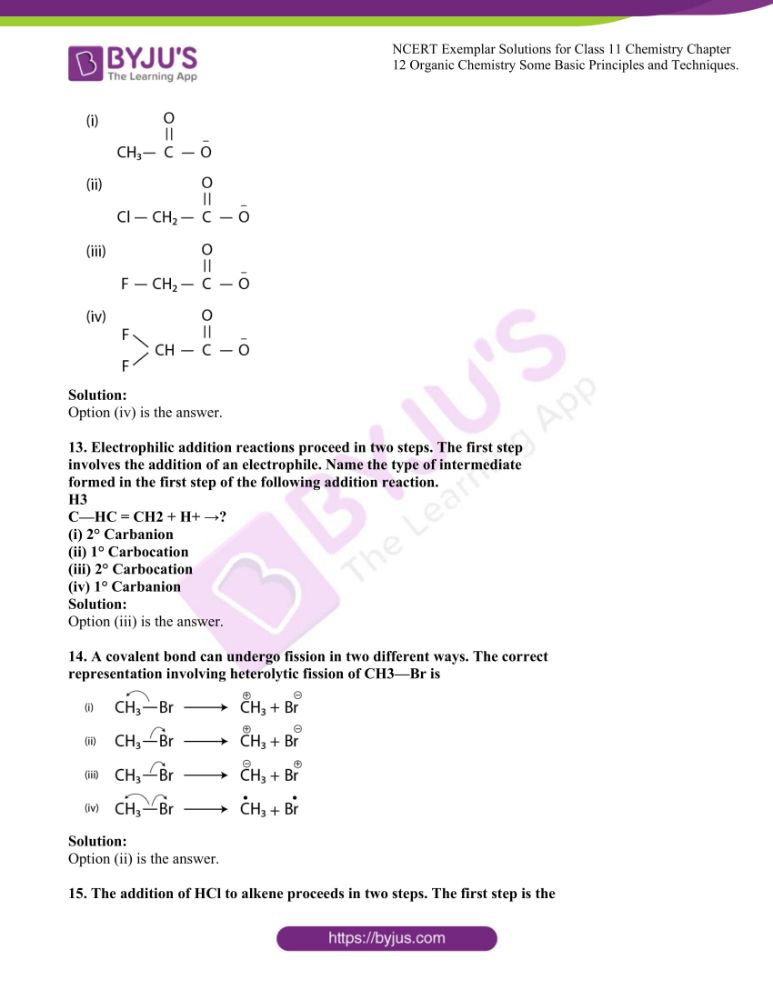 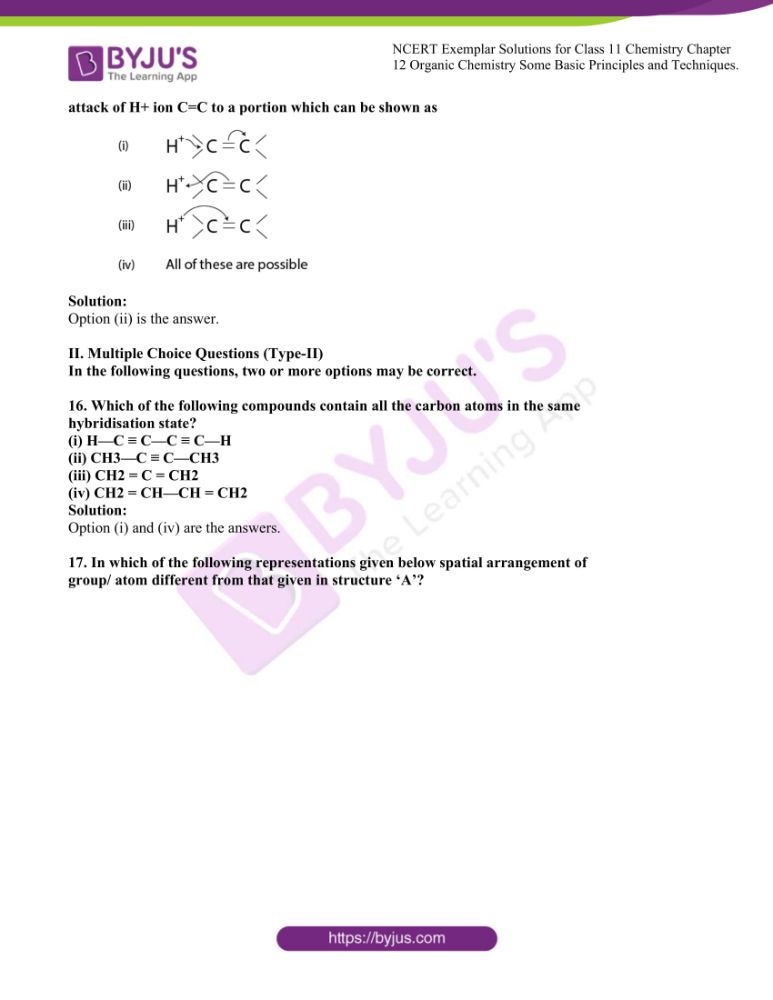 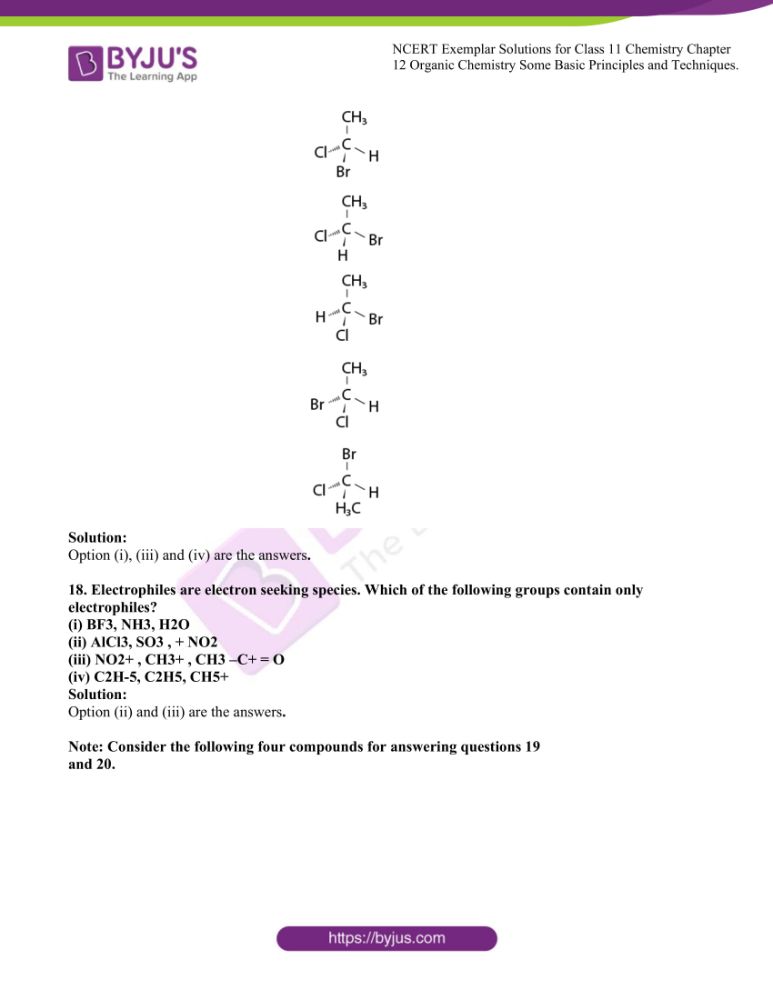 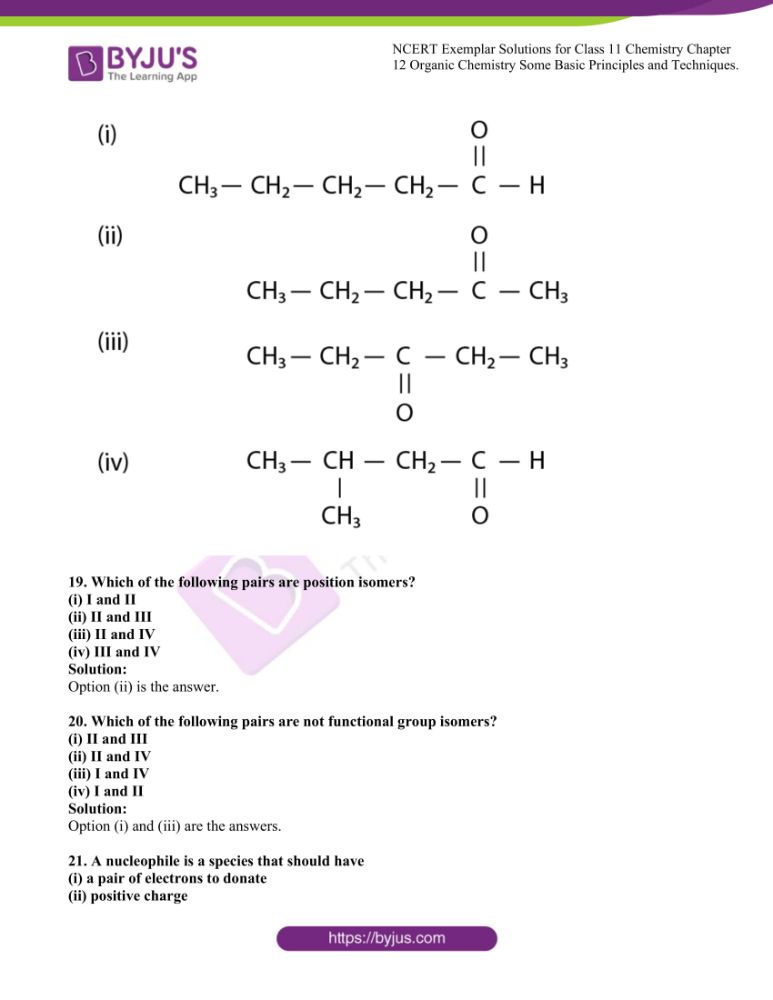 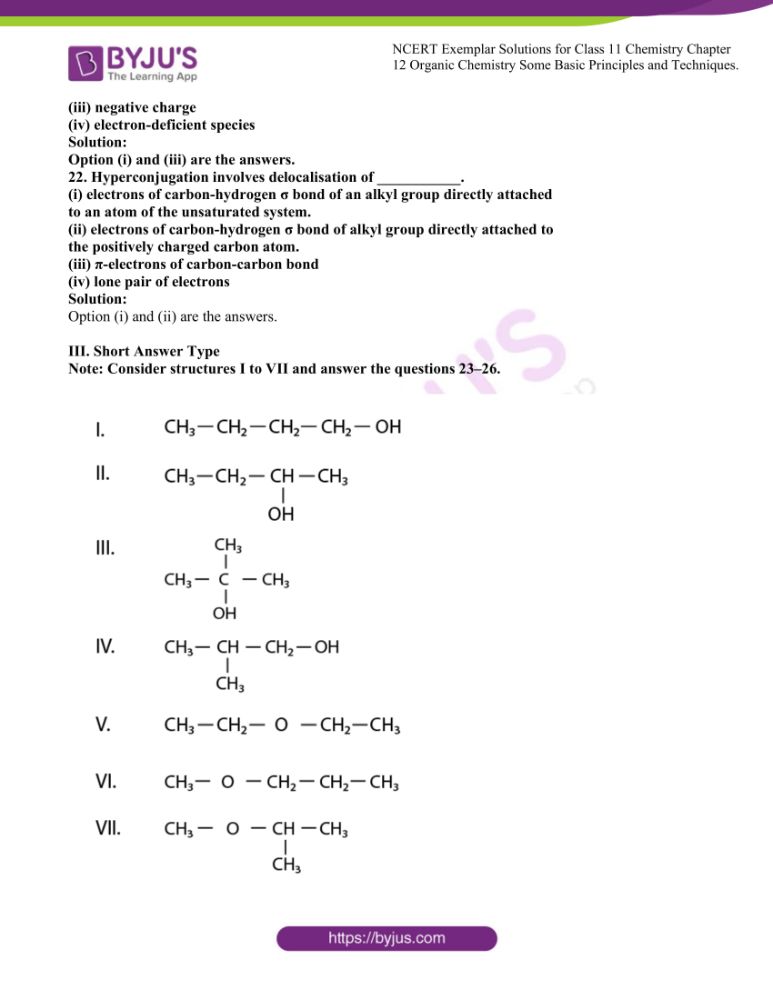 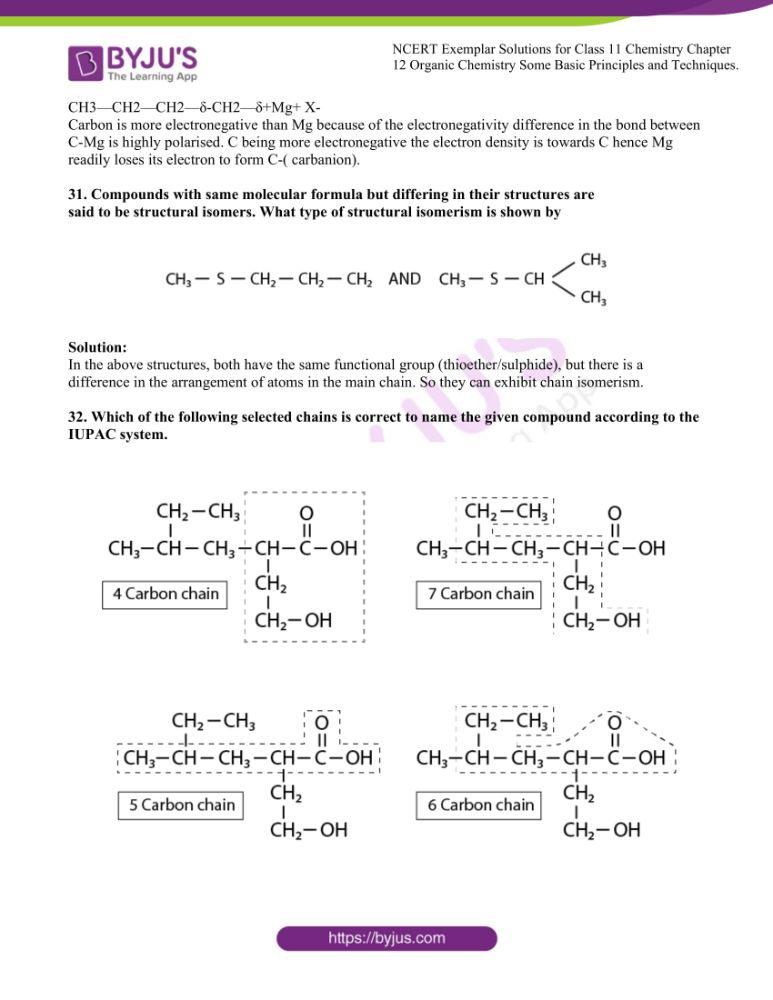 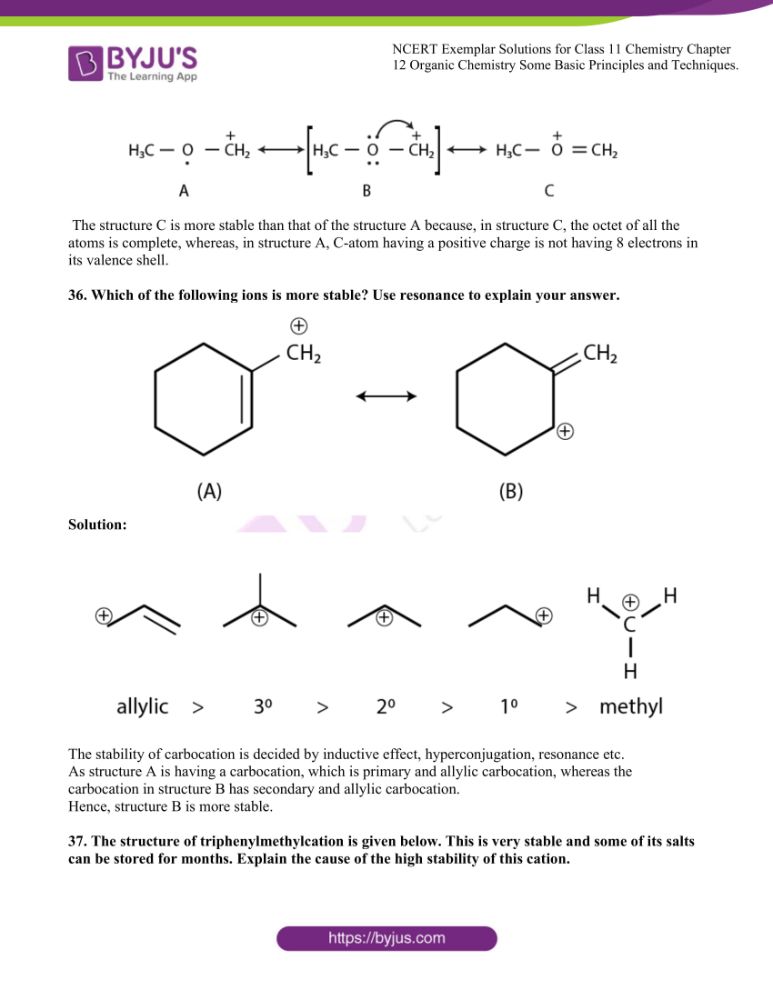 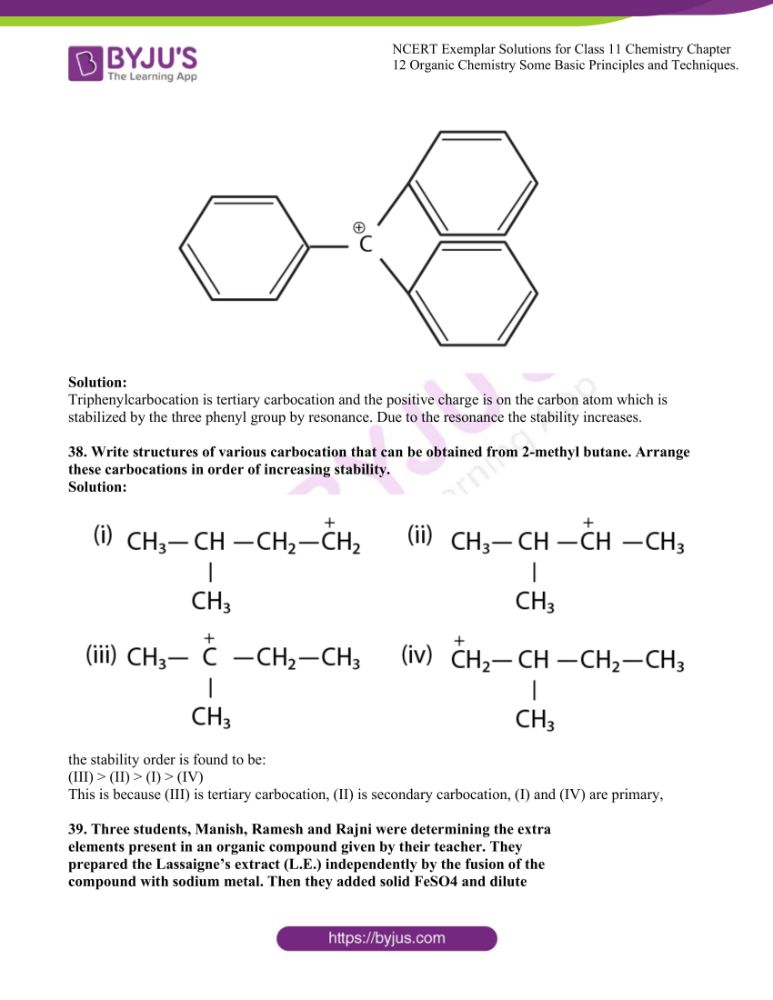 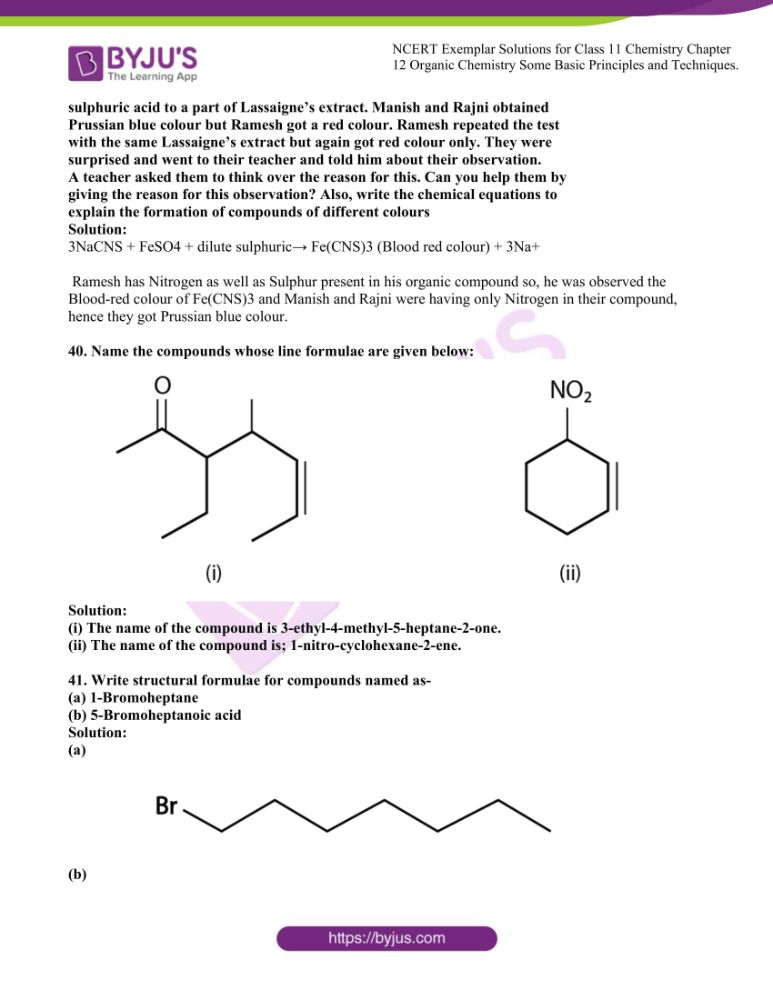 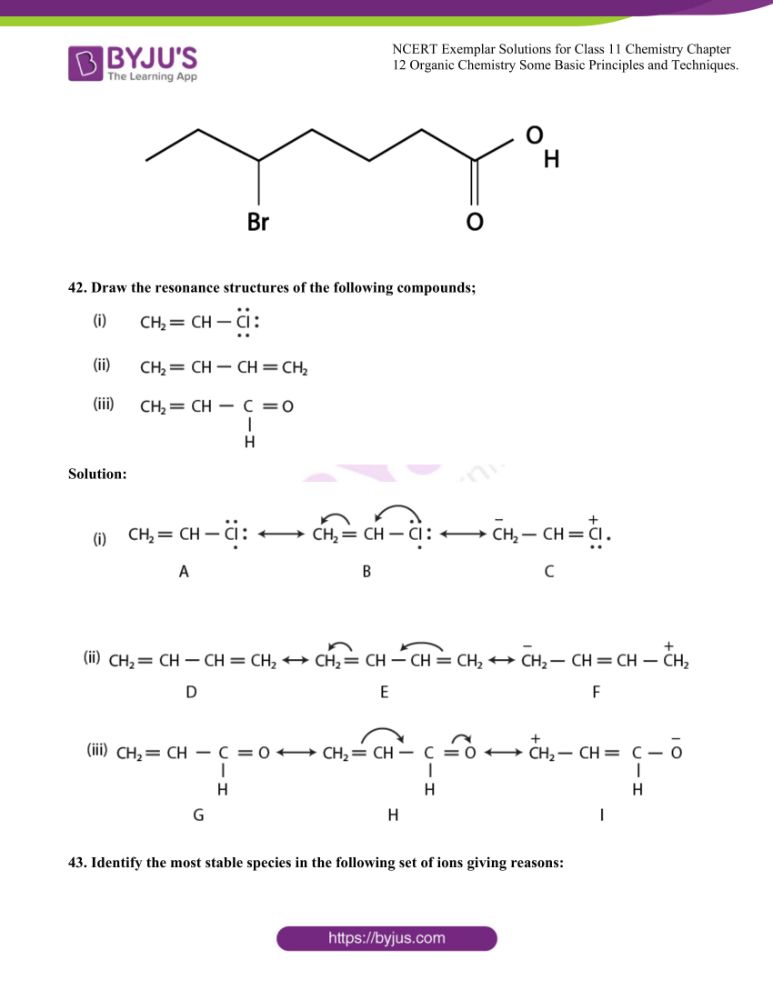 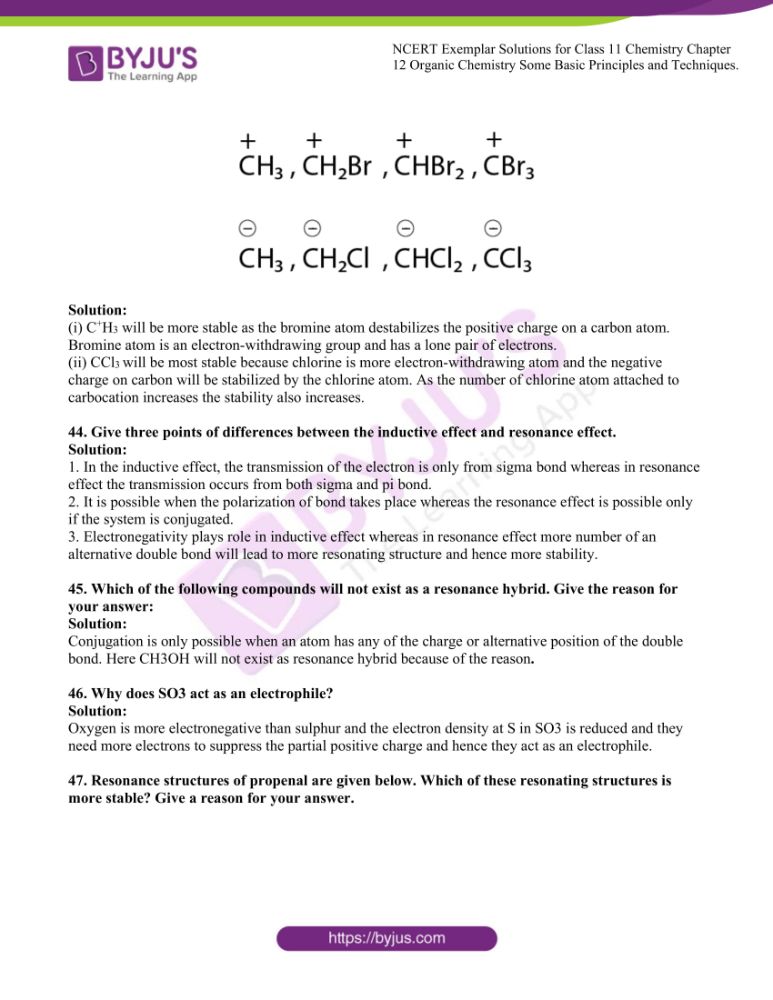 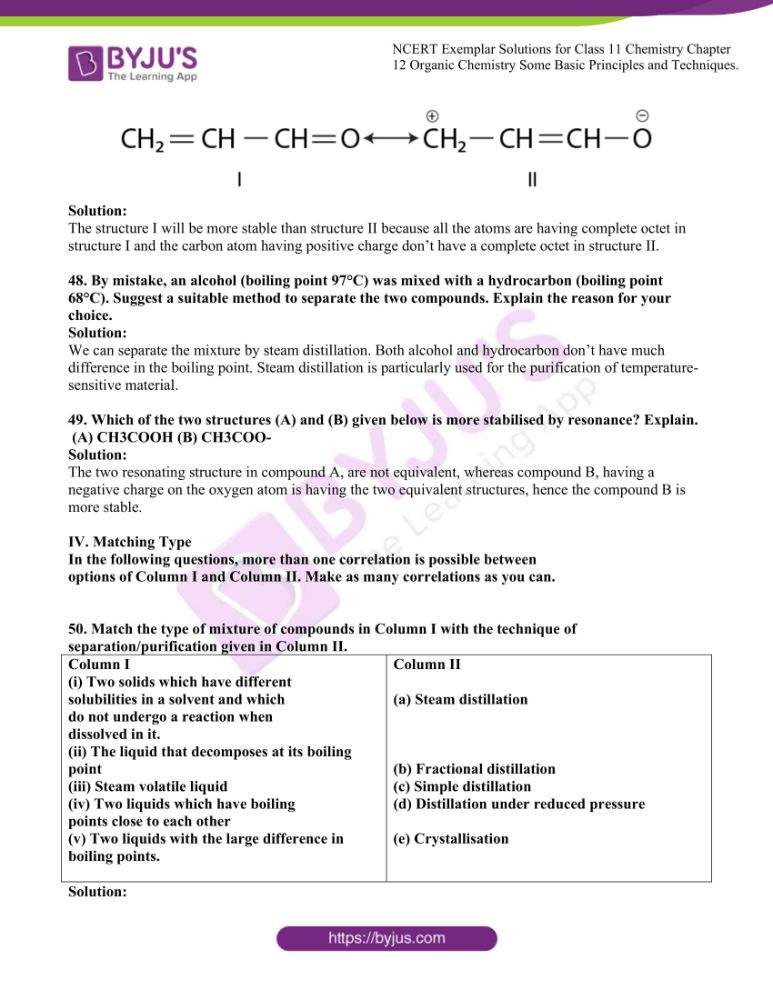 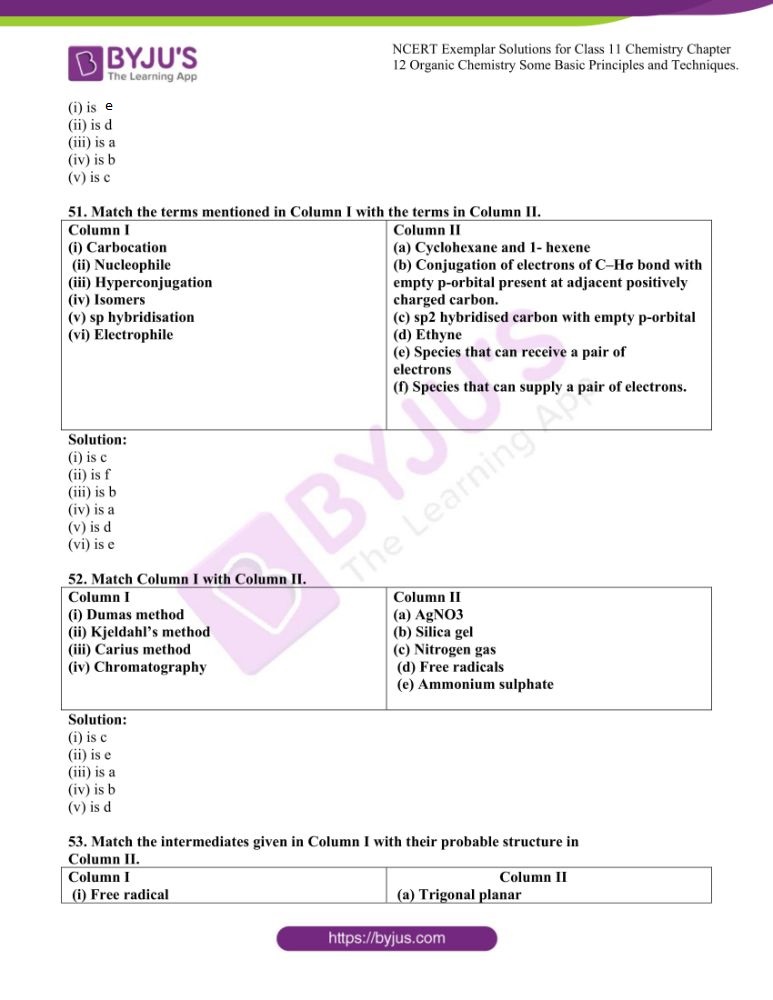 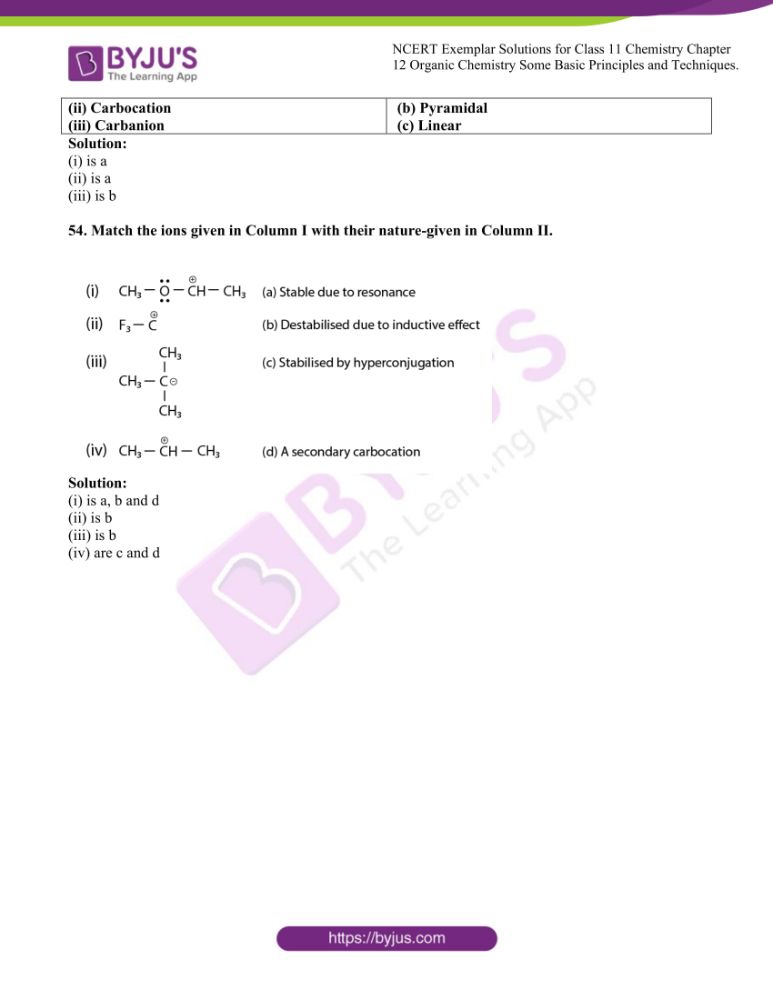 1. Which of the following is the correct IUPAC name?

Option (i) the answer.

3. The IUPAC name for

4. Electronegativity of carbon atoms depends upon their state of hybridisation.

In which of the following compounds, the carbon marked with an asterisk is

5. In which of the following, functional group isomerism is not possible?

6. The fragrance of flowers is due to the presence of some steam volatile organic

compounds called essential oils. These are generally insoluble in water at

room temperature but are miscible with water vapour in the vapour phase. A

a suitable method for the extraction of these oils from the flowers is:

7. During the hearing of a court case, the judge suspected that some changes in the

documents had been carried out. He asked the forensic department to check

the ink used at two different places. According to you which technique can

give the best results?

8. The principle involved in paper chromatography is

9. What is the correct order of decreasing stability of the following cations?

11. In which of the following compounds the carbon marked with an asterisk is

expected to have the greatest positive charge?

12. Ionic species are stabilised by the dispersal of charge. Which of the

following carboxylate ion is the most stable? 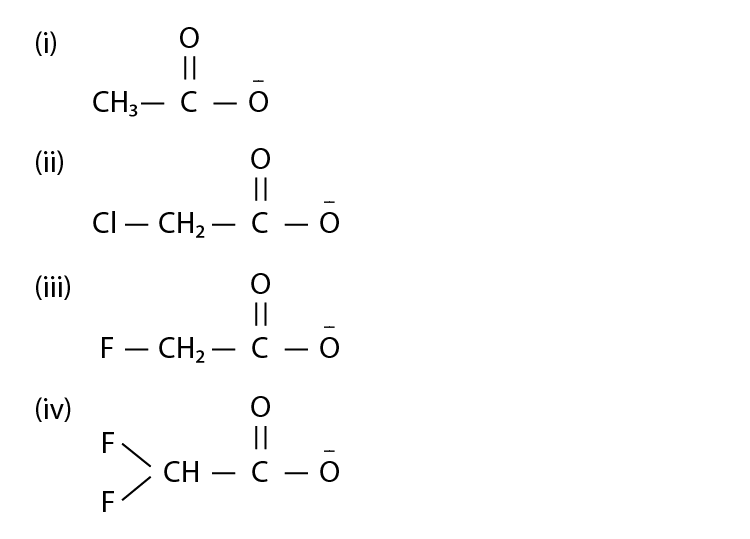 involves the addition of an electrophile. Name the type of intermediate

formed in the first step of the following addition reaction.

14. A covalent bond can undergo fission in two different ways. The correct

15. The addition of HCl to alkene proceeds in two steps. The first step is the

16. Which of the following compounds contain all the carbon atoms in the same

17. In which of the following representations given below spatial arrangement of

group/ atom different from that given in structure ‘A’? 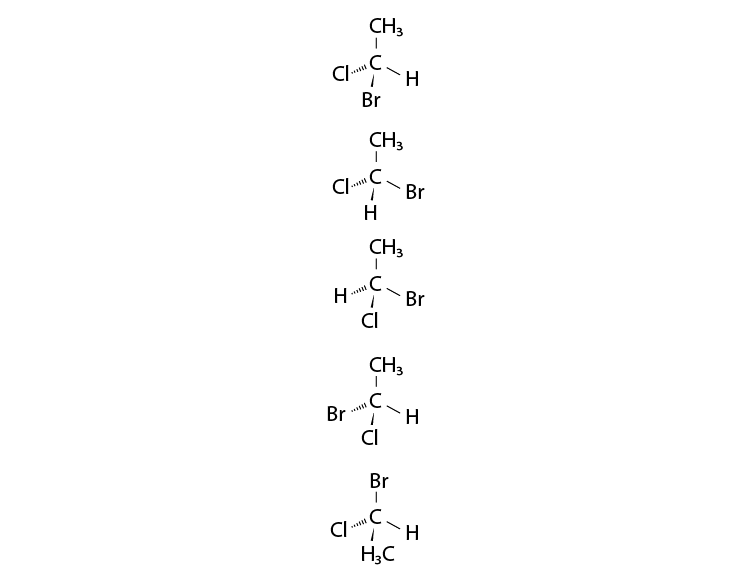 18. Electrophiles are electron seeking species. Which of the following groups contain only electrophiles? 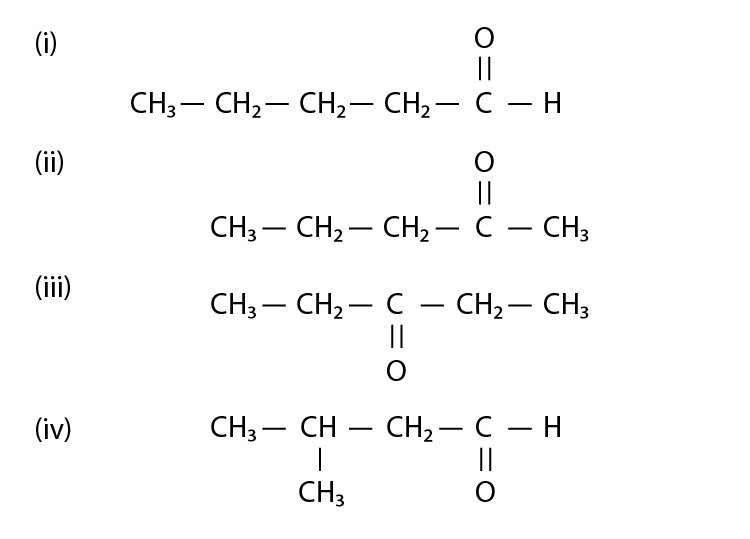 19. Which of the following pairs are position isomers?

20. Which of the following pairs are not functional group isomers?

21. A nucleophile is a species that should have

(i) a pair of electrons to donate

to an atom of the unsaturated system.

Note: Consider structures I to VII and answer the questions 23–26. 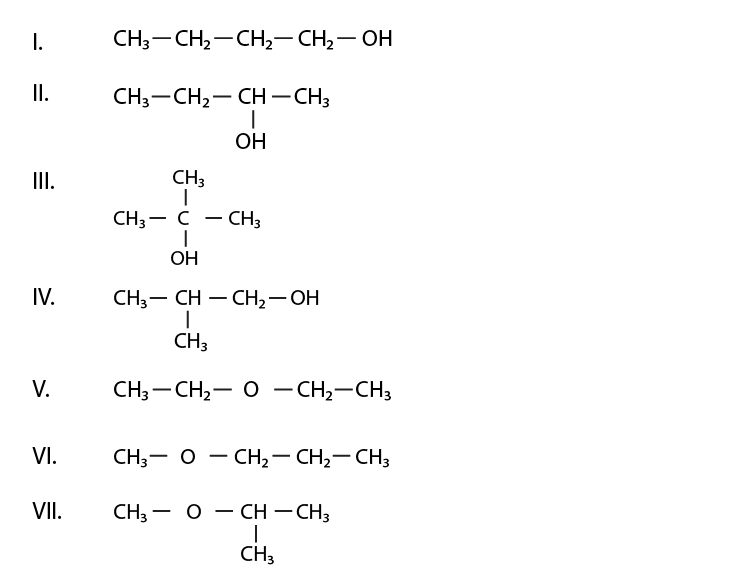 23. Which of the above compounds form pairs of metamers?

V and VI form pairs of metamers. (metamers of ethers). Here in compounds V and VI, the chain length is the same but the distribution of carbons is different around oxygen atom.

24. Identify the pairs of compounds which are functional group isomers.

25. Identify the pairs of compounds that represent position isomerism.

I and II, III and IV, V and VI are the compounds which represent the position isomerism.

26. Identify the pairs of compounds that represent chain isomerism.

27. For testing halogens in an organic compound with AgNO3 solution, sodium extract (Lassaigne’s test) is acidified with dilute HNO3. What will happen if a student acidifies the extract with dilute H2 SO4 in place of dilute HNO3?

If dilute H2 SO4is added then sodium sulphide and sodium cyanine are not decomposed thereby we will not get the correct result if halides are also present.

29. Explain, how is the electronegativity of carbon atoms related to their state of hybridisation in an organic compound?

Hybridization for carbon in organic compounds is of three types, sp, sp2 and sp3. More the ‘s’ character more is the electronegativity of the carbon as ‘s’ orbitals are closer to the nucleus, hence electrons held more closely.

30. Show the polarisation of carbon-magnesium bond in the following structure.

31. Compounds with same molecular formula but differing in their structures are

In the above structures, both have the same functional group (thioether/sulphide), but there is a difference in the arrangement of atoms in the main chain. So they can exhibit chain isomerism.

32. Which of the following selected chains is correct to name the given compound according to the IUPAC system. 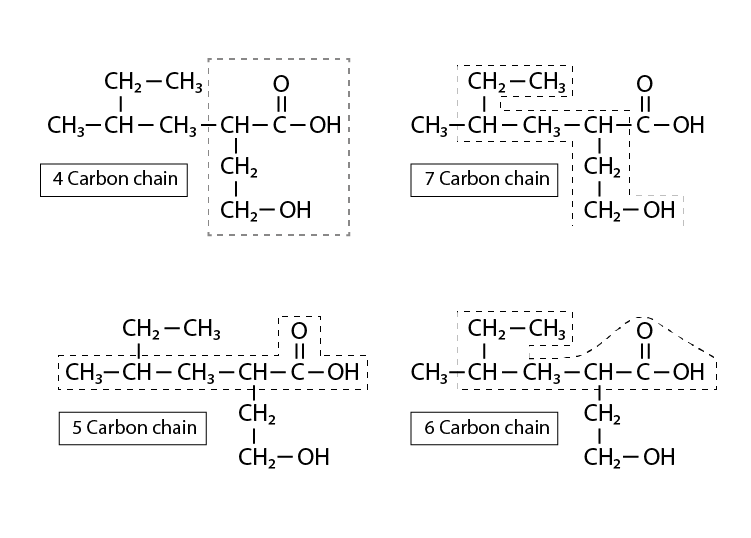 b. Out of carboxylic acid and alcohol acid gets the priority hence the numbering starts from carboxylic carbon.

c. There is a branched alkyl group substitution at second carbon

d. There is a hydroxyl group at 4th carbon therefore it can be named as 2-(2-methyl butyl)-4-hydroxybutanoic acid.

33. In DNA and RNA, the nitrogen atom is present in the ring system. Can the Kjeldahl method be used for the estimation of nitrogen present in these? Give reasons.

The Kjeldahl method cannot be used for the estimation of nitrogen present in DNA and RNA because nitrogen cannot be converted into ammonium sulphate in the conditions provided in this method. The difficulty in decomposing ring structures limits this test for DNA and RNA.

34. If a liquid compound decomposes at its boiling point, which method(s) can you choose for its purification. It is known that the compound is stable at low pressure, steam volatile and insoluble in water.

As the liquid compound decomposes at its boiling point which means that the compound is heat-sensitive, hence we use “Steam distillation” for its purification. It is done for temperature-sensitive material.

Note: Answer the questions 35 to 38 based on the information given below:

“Stability of carbocations depends upon the electron releasing inductive effect

of groups adjacent to positively charged carbon atom involvement of

neighbouring groups in hyperconjugation and resonance.”

35. Draw the possible resonance structures for

of the structures is more stable. Give the reason for your answer.

36. Which of the following ions is more stable? Use resonance to explain your answer.

The stability of carbocation is decided by inductive effect, hyperconjugation, resonance etc.

Hence, structure B is more stable.

37. The structure of triphenylmethylcation is given below. This is very stable and some of its salts can be stored for months. Explain the cause of the high stability of this cation.

Triphenylcarbocation is tertiary carbocation and the positive charge is on the carbon atom which is stabilized by the three phenyl group by resonance. Due to the resonance the stability increases.

38. Write structures of various carbocation that can be obtained from 2-methyl butane. Arrange these carbocations in order of increasing stability.

the stability order is found to be:

39. Three students, Manish, Ramesh and Rajni were determining the extra

elements present in an organic compound given by their teacher. They

prepared the Lassaigne’s extract (L.E.) independently by the fusion of the

compound with sodium metal. Then they added solid FeSO4 and dilute

sulphuric acid to a part of Lassaigne’s extract. Manish and Rajni obtained

Prussian blue colour but Ramesh got a red colour. Ramesh repeated the test

with the same Lassaigne’s extract but again got red colour only. They were

surprised and went to their teacher and told him about their observation.

A teacher asked them to think over the reason for this. Can you help them by

giving the reason for this observation? Also, write the chemical equations to

explain the formation of compounds of different colours

Ramesh has Nitrogen as well as Sulphur present in his organic compound so, he was observed the Blood-red colour of Fe(CNS)3 and Manish and Rajni were having only Nitrogen in their compound, hence they got Prussian blue colour.

40. Name the compounds whose line formulae are given below:

(ii) The name of the compound is; 1-nitro-cyclohexane-2-ene.

42. Draw the resonance structures of the following compounds;

43. Identify the most stable species in the following set of ions giving reasons:

(i) C+H3 will be more stable as the bromine atom destabilizes the positive charge on a carbon atom. Bromine atom is an electron-withdrawing group and has a lone pair of electrons.

(ii) CCl3 will be most stable because chlorine is more electron-withdrawing atom and the negative charge on carbon will be stabilized by the chlorine atom. As the number of chlorine atom attached to carbocation increases the stability also increases.

44. Give three points of differences between the inductive effect and resonance effect.

2. It is possible when the polarization of bond takes place whereas the resonance effect is possible only if the system is conjugated.

45. Which of the following compounds will not exist as a resonance hybrid. Give the reason for your answer:

Conjugation is only possible when an atom has any of the charge or alternative position of the double bond. Here CH3OH will not exist as resonance hybrid because of the reason.

46. Why does SO3 act as an electrophile?

Oxygen is more electronegative than sulphur and the electron density at S in SO3 is reduced and they need more electrons to suppress the partial positive charge and hence they act as an electrophile.

47. Resonance structures of propenal are given below. Which of these resonating structures is more stable? Give a reason for your answer.

48. By mistake, an alcohol (boiling point 97°C) was mixed with a hydrocarbon (boiling point 68°C). Suggest a suitable method to separate the two compounds. Explain the reason for your choice.

We can separate the mixture by steam distillation. Both alcohol and hydrocarbon don’t have much difference in the boiling point. Steam distillation is particularly used for the purification of temperature-sensitive material.

49. Which of the two structures (A) and (B) given below is more stabilised by resonance? Explain.

The two resonating structure in compound A, are not equivalent, whereas compound B, having a negative charge on the oxygen atom is having the two equivalent structures, hence the compound B is more stable.

In the following questions, more than one correlation is possible between

options of Column I and Column II. Make as many correlations as you can.

50. Match the type of mixture of compounds in Column I with the technique of

separation/purification given in Column II.

52. Match Column I with Column II.

53. Match the intermediates given in Column I with their probable structure in 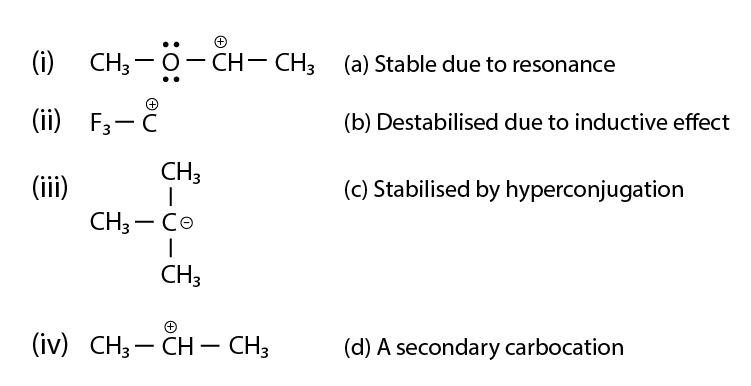 Subtopics of Chapter 12 Organic Chemistry Some Basic Principles and Techniques

Which are the important topics I should learn from the Chapter 12 of NCERT Exemplar Solutions for Class 11 Chemistry?

Give three points of differences between the inductive effect and resonance effect in the Chapter 12 of NCERT Exemplar Solutions for Class 11 Chemistry?

Why should I download the NCERT Exemplar Solutions for Class 11 Chemistry Chapter 12 from BYJU’S?

Students who aspire to score good marks in the board exams and other competitive exams should refer to the NCERT Solutions from BYJU’S. It can be considered as a solutions book which helps students in getting their doubts cleared instantly. Students will be able to obtain a comprehensive knowledge from the solutions PDF available at BYJU’S. While answering the textbook questions, students can cross check their answer with the solutions and understand the areas which they are lagging behind.