NCERT exemplar chemistry class 11 Chapter 4 Chemical Bonding and Molecular Structure is provided here to help students develop a clear approach to chemical bonding. Chemical Bonding and Molecular Structure is a very important topic that lays the foundation for all your future studies. In order to understand the topic clearly, students are advised to get thorough with the exemplar solutions provided here.

Chapter 4 which deals with the topic of chemical bonds and molecular structure is included in the class 11 chemistry textbook to help students develop a clear approach to chemical bonding. Here students have to examine the formation of different types of bonds like a covalent bond or hydrogen bond understand different rules and theories as well as hybridisation. To help students develop a strong foundation and master the chapter easily, NCERT Exemplar for class 11 Chemistry chapter 4 – chemical bonding and molecular structure is available here for free. Students can use this exemplar as a great reference tool to study effectively and to score higher grades in the exams. The exemplar has been prepared by subject experts who have included detailed answers in a simple language and style to help students remember and understand each topic easily. The exemplar is available in the form of a PDF and can be used at the student’s convenience. 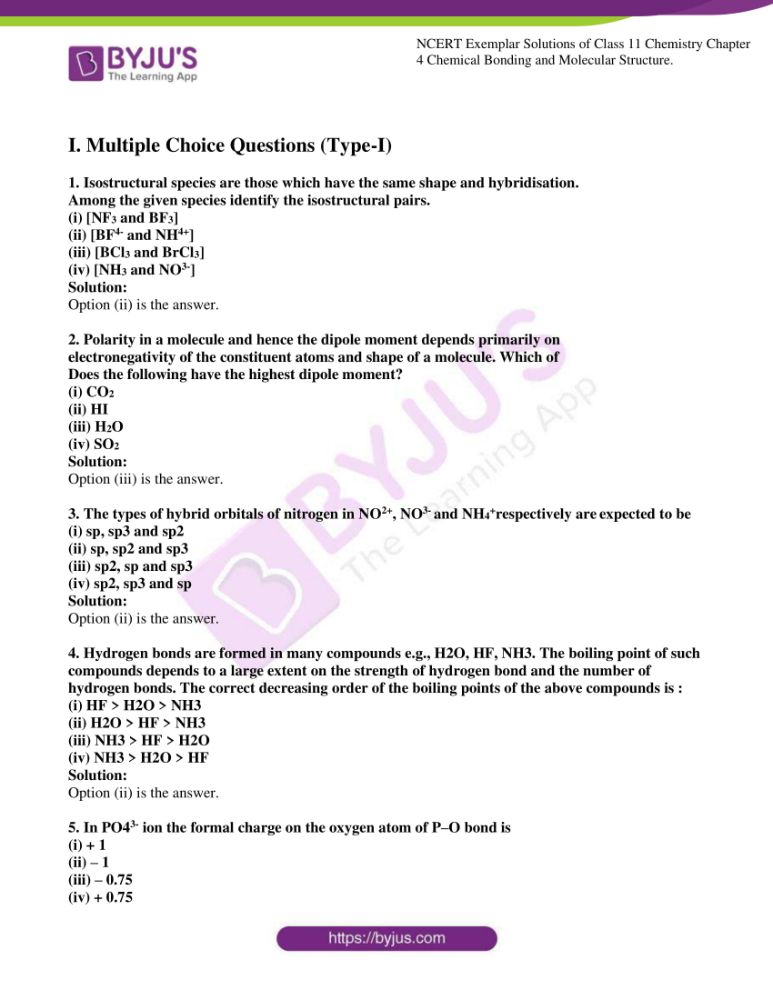 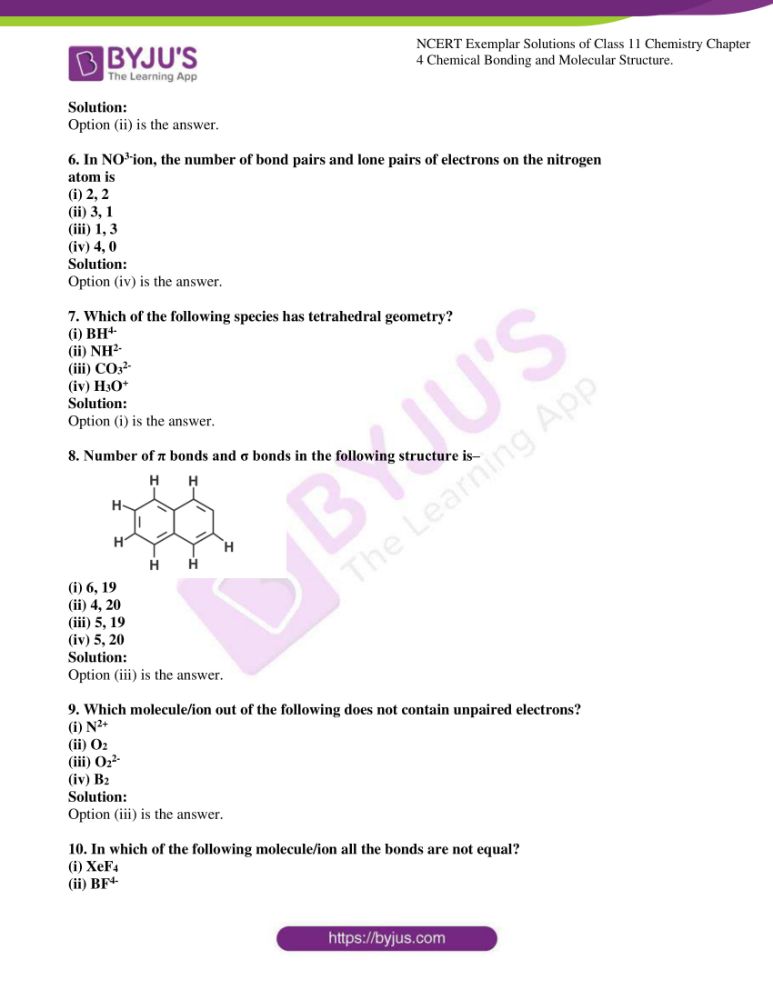 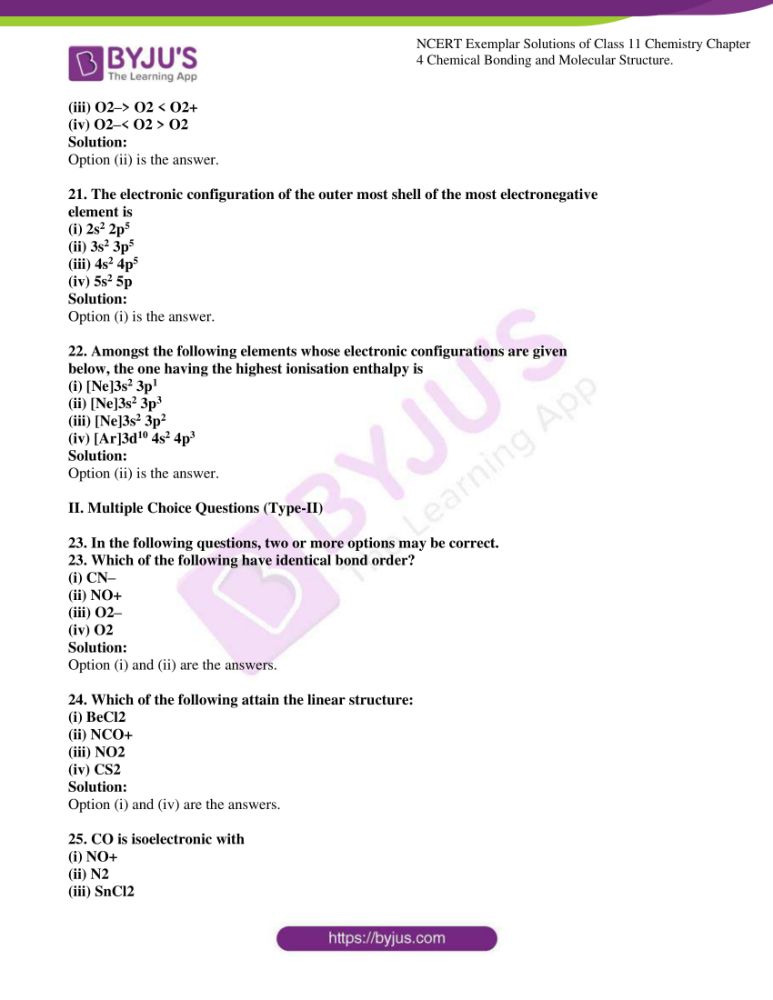 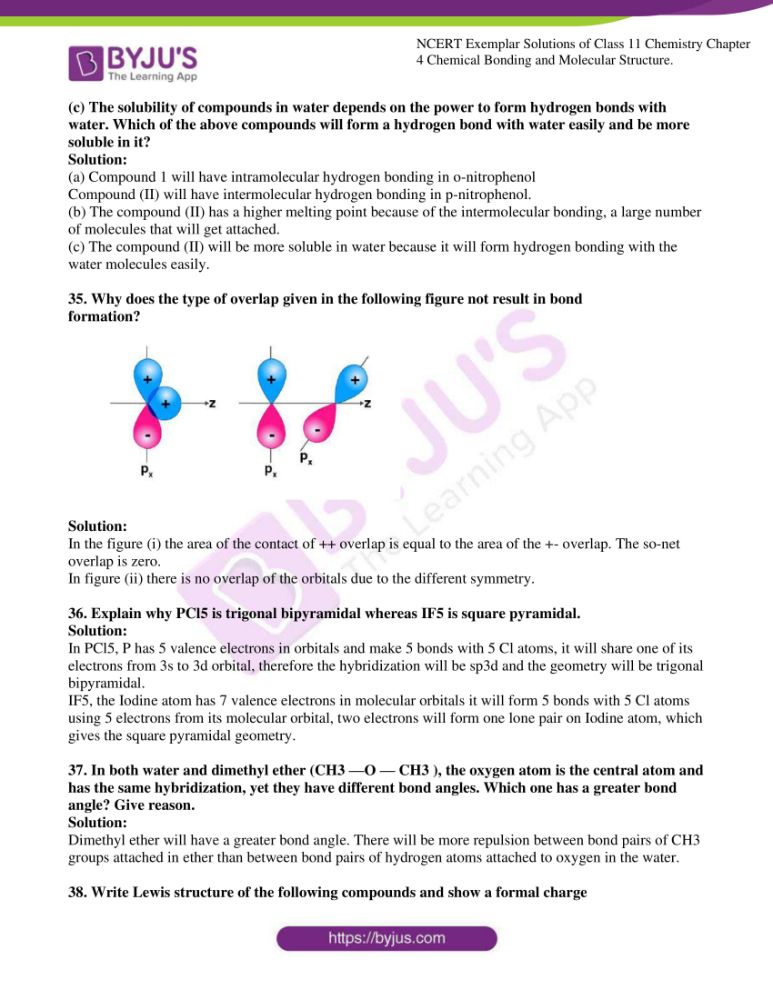 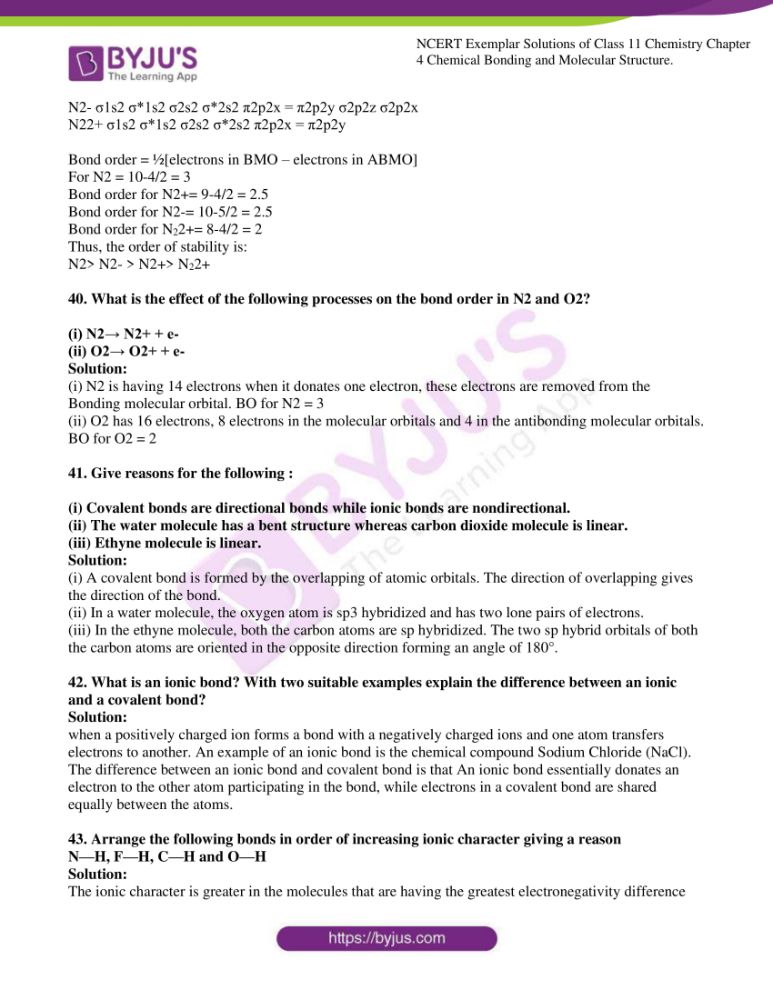 1. Isostructural species are those which have the same shape and hybridisation.

Among the given species identify the isostructural pairs.

2. Polarity in a molecule and hence the dipole moment depends primarily on

electronegativity of the constituent atoms and shape of a molecule. Which of

Does the following have the highest dipole moment?

3. The types of hybrid orbitals of nitrogen in NO2+, NO3- and NH4+respectively are expected to be

5. In PO43- ion the formal charge on the oxygen atom of P–O bond is

6. In NO3-ion, the number of bond pairs and lone pairs of electrons on the nitrogen

7. Which of the following species has tetrahedral geometry?

8. Number of π bonds and σ bonds in the following structure is– 9. Which molecule/ion out of the following does not contain unpaired electrons?

10. In which of the following molecule/ion all the bonds are not equal?

11. In which of the following substances will hydrogen bond be strongest?

four electrons involved in chemical bond formation will be_____.

13. Which of the following angle corresponds to sp2 hybridisation?

The electronic configurations of three elements, A, B and C are given below.

Answer the questions 14 to 17 on the basis of these configurations.

14. The stable form of A may be represented by the formula :

15. The stable form of C may be represented by the formula :

16. The molecular formula of the compound formed from B and C will be

18. Which of the following order of energies of molecular orbitals of N2 is correct?

19. Which of the following statement is not correct from the viewpoint of molecular

is expected to exist.

(iii) Bond strength of N2 is maximum amongst the homonuclear diatomic

molecules belonging to the second period.

(iv) The order of energies of molecular orbitals in N2

20. Which of the following options represents the correct bond order :

21. The electronic configuration of the outer most shell of the most electronegative

22. Amongst the following elements whose electronic configurations are given

below, the one having the highest ionisation enthalpy is

23. Which of the following have identical bond order?

24. Which of the following attain the linear structure:

25. CO is isoelectronic with

26. Which of the following species have the same shape?

27. Which of the following statements are correct about CO32-?

(i) The hybridisation of the central atom is sp3.

(iii) The average formal charge on each oxygen atom is 0.67 units.

28. Diamagnetic species are those which contain no unpaired electrons. Which

among the following are diamagnetic?

Option (i) and (iv) are the answers

29. Species having same bond order are :

30. Which of the following statements are not correct?

(ii) In canonical structures, there is a difference in the arrangement of atoms.

In H2S, the Sulphur atom is surrounded by the four electron pairs (two bond pairs and two lone pairs).

The repulsion between the lone pair electrons brings distortion in the shape of the H2S.

Thus, H2Sis not linear in shape.

The Molecular Orbital configuration of O2+ and O-2 is given below:

According to Molecular Orbital Theory, the greater the bond order greater is the bond energy.

In BrF5 the central atom is bromine which has the hybridization sp3d2.

The lone pair and bond pair repel each other. Thus, the shape is square pyramidal.

34. Structures of molecules of two compounds are given below : (b) The melting point of a compound depends on, among other things, the extent of hydrogen bonding. On this basis explain which of the above two compounds will show a higher melting point.

(c) The solubility of compounds in water depends on the power to form hydrogen bonds with water. Which of the above compounds will form a hydrogen bond with water easily and be more soluble in it?

(a) Compound 1 will have intramolecular hydrogen bonding in o-nitrophenol

Compound (II) will have intermolecular hydrogen bonding in p-nitrophenol.

(b) The compound (II) has a higher melting point because of the intermolecular bonding, a large number of molecules that will get attached.

(c) The compound (II) will be more soluble in water because it will form hydrogen bonding with the water molecules easily.

35. Why does the type of overlap given in the following figure not result in bond In figure (ii) there is no overlap of the orbitals due to the different symmetry.

36. Explain why PCl5 is trigonal bipyramidal whereas IF5 is square pyramidal.

In PCl5, P has 5 valence electrons in orbitals and make 5 bonds with 5 Cl atoms, it will share one of its electrons from 3s to 3d orbital, therefore the hybridization will be sp3d and the geometry will be trigonal bipyramidal.

37. In both water and dimethyl ether (CH3 —Ο — CH3 ), the oxygen atom is the central atom and has the same hybridization, yet they have different bond angles. Which one has a greater bond angle? Give reason.

38. Write Lewis structure of the following compounds and show a formal charge 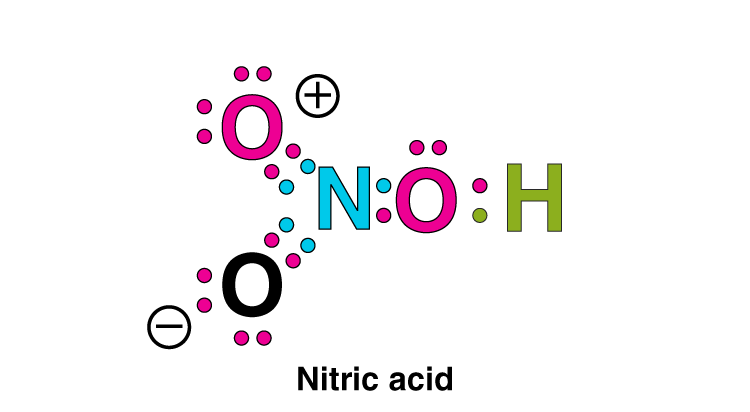 The formal charge is calculated by

Formal charge = ½ [total no: of bonding or shared electrons]

39. The energy of σ2pz molecular orbital is greater than π2px and π2py molecular orbitals in nitrogen molecule. Write the complete sequence of energy levels in the increasing order of energy in the molecule. Compare the relative stability and the magnetic behaviour of the following species :

Thus, the order of stability is:

40. What is the effect of the following processes on the bond order in N2 and O2?

(i) N2 is having 14 electrons when it donates one electron, these electrons are removed from the Bonding molecular orbital. BO for N2 = 3

41. Give reasons for the following :

(ii) The water molecule has a bent structure whereas carbon dioxide molecule is linear.

(ii) In a water molecule, the oxygen atom is sp3 hybridized and has two lone pairs of electrons.

42. What is an ionic bond? With two suitable examples explain the difference between an ionic and a covalent bond?

when a positively charged ion forms a bond with a negatively charged ions and one atom transfers electrons to another. An example of an ionic bond is the chemical compound Sodium Chloride (NaCl).

The difference between an ionic bond and covalent bond is that An ionic bond essentially donates an electron to the other atom participating in the bond, while electrons in a covalent bond are shared equally between the atoms.

43. Arrange the following bonds in order of increasing ionic character giving a reason

Thus, the ionic character order will be:

44. Explain why CO32- ion cannot be represented by a single Lewis structure. How can it be best represented?

Carbonate ion is present in the form of a resonating hybrid structure. These structures are equivalent. Resonance all 3 C-O bonds get a double character in one of the resonating structures.

Thus, all the bonds are equivalent and have equal length hence carbonate ion cannot be represented by a single Lewis structure.

45. Predict the hybridisation of each carbon in the molecule of the organic compound given below. Also indicate the total number of sigma and pi bonds in this molecule.

The triple bond has 2 pie bonds and one sigma bond.

Each double bond has one sigma and one pie bond.

Every single bond is a sigma bond.

Thus, the total number of sigma bonds is 11 and pie bonds are 4.

46. Group the following as linear and non-linear molecules :

BeCl2 has a linear structure

HOCl is also non-linear in structure.

H2O has a V-shaped structure.

Cl2O has a V-shaped structure.

(i) Write the molecular formula of the compounds formed by these elements individually with hydrogen.

(ii) Which of these compounds will have the highest dipole moment?

(ii) The compound HZ has a linear shape and the difference in the electronegativity of Hydrogen and element Z is maximum.

48. Draw the resonating structure of 49. Predict the shapes of the following molecules based on hybridisation.

In compound BCl3, Boron has sp2-hybridisation and the shape is Triangular Planar.

In methane CH4, Carbon has sp3 -hybridization and shape are Tetrahedral.

In carbon dioxide CO2, carbon has sp-hybridisation and shape is Linear.

In ammonia NH3, nitrogen has sp3-hybridisation and shape is Pyramidal.

51. What is meant by the term average bond enthalpy? Why is there a difference in bond enthalpy of O—H bond in ethanol (C2H5OH) and water?

We at BYJU’S believe in creating seamless opportunities to help students excel at the highest level. Therefore we have created some of the best NCERT study material with an aim to help students clear their examinations with flying colours. The NCERT exemplar we are providing includes relevant exercises that have been solved by our highly qualified subject experts. Detailed explanations are also provided to give students a clear understanding and in-depth knowledge of the topic. The NCERT exemplar is the perfect study material.

BYJU’S believes in creating endless learning opportunities for CBSE students in order to excel in their learning journey. In order to achieve this, BYJU’S have created some of the best NCERT study material with an aim to help students clear their examinations with flying colours. Our solution includes relevant exercises that have been solved by our highly qualified subject experts. Detailed explanations are also provided to give students a clear understanding and in-depth knowledge of the topic. The NCERT chemistry exemplar provided here is the perfect study material.