NCERT class 12 Biology exemplar for chapter 11 Biotechnology: Principles and Processes is an important source for the preparation of your CBSE class 12 Biology examination and graduate entrance examinations. This study material presents you the exemplar questions from NCERT exemplar book, the important question from previous year question papers, sample papers, worksheets and exercises.

NCERT class 12 Biology exemplar for chapter 11 provide you appropriate opportunity to practice different kinds of questions that can be asked in the examinations. MCQ’S, Fill in the blanks, Match the following, true or false are the common kind of question which you have to practice in order to perform well in examinations especially entrance examinations. 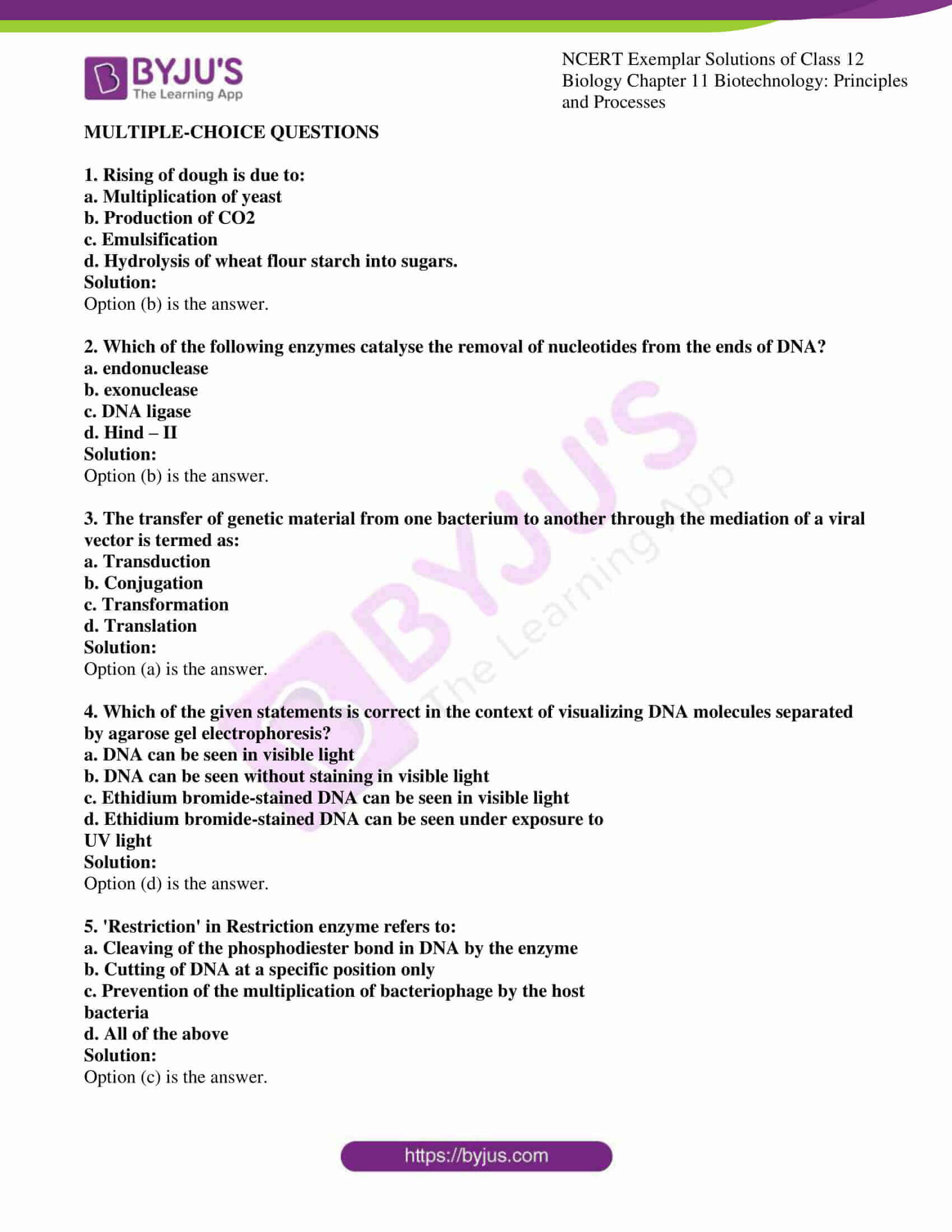 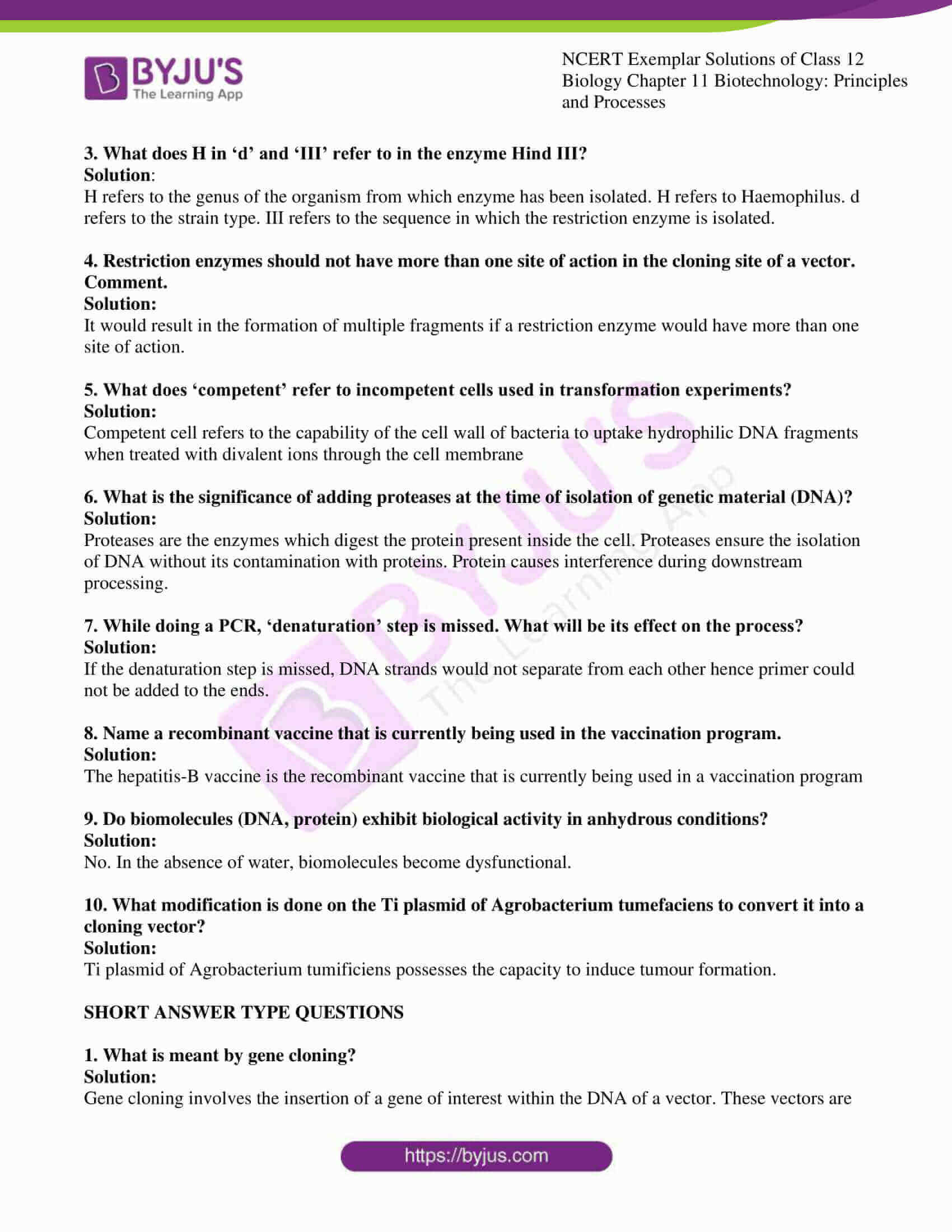 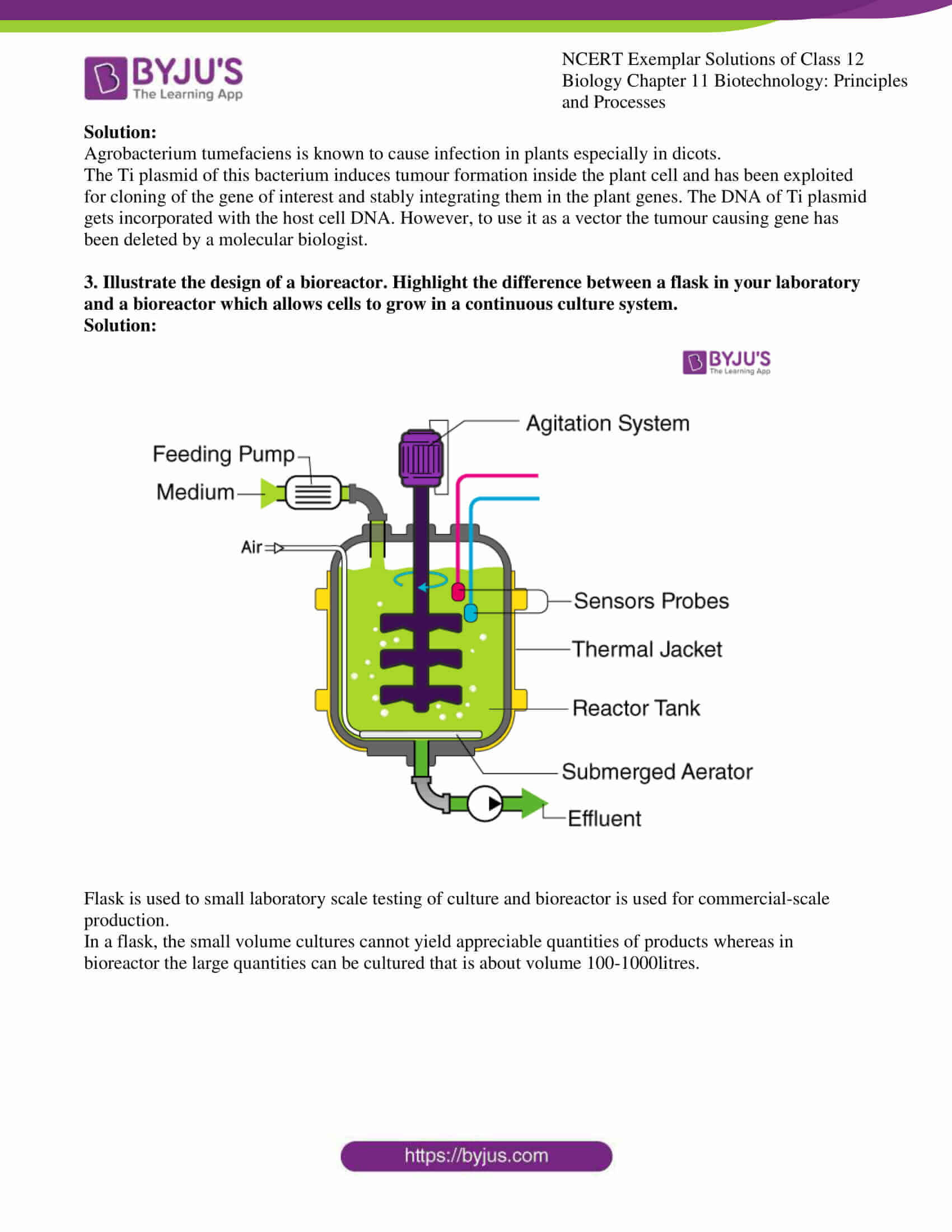 a. Multiplication of yeast

b. Production of CO2

2. Which of the following enzymes catalyse the removal of nucleotides from the ends of DNA?

3. The transfer of genetic material from one bacterium to another through the mediation of a viral vector is termed as:

4. Which of the given statements is correct in the context of visualizing DNA molecules separated by agarose gel electrophoresis?

a. DNA can be seen in visible light

b. DNA can be seen without staining in visible light

c. Ethidium bromide-stained DNA can be seen in visible light

d. Ethidium bromide-stained DNA can be seen under exposure to

5. ‘Restriction’ in Restriction enzyme refers to:

a. Cleaving of the phosphodiester bond in DNA by the enzyme

b. Cutting of DNA at a specific position only

c. Prevention of the multiplication of bacteriophage by the host

d. All of the aboveSolution:

6. Which of the following is not required in the preparation of a recombinant

7. In agarose gel electrophoresis, DNA molecules are separated on the basis

a. Charge the only

8. The most important feature in a plasmid to serve as a vector in gene

a. Origin of replication (ori)

b. Presence of a selectable marker

9. While isolating DNA from bacteria, which of the following enzymes is not

10. Which of the following contributed in popularising the PCR (polymerase

a. Easy availability of DNA template

b. Availability of synthetic primers

11. An antibiotic resistance gene in a vector usually helps in the selection of:

Option (b) is the answer

12. Significance of ‘heat shock’ method in bacterial transformation is to

a. Binding of DNA to the cell wall

b. Uptake of DNA through membrane transport proteins

c. Uptake of DNA through transient pores in the bacterial cell wall

13. The role of DNA ligase in the construction of a recombinant DNA

a. Formation of a phosphodiester bond between two DNA fragments

b. Formation of hydrogen bonds between sticky ends of DNA

c. Ligation of all purine and pyrimidine bases

14. Which of the following bacteria is not a source of restriction

15. Which of the following steps are catalysed by Taq DNA polymerase in a

a. Denaturation of template DNA

b. Annealing of primers to template DNA

c. Extension of primer end on the template DNA

16. A bacterial cell was transformed with a recombinant DNA molecule that

was generated using a human gene. However, the transformed cells did

not produce the desired protein. Reasons could be:

a. A human gene may have intron which bacteria cannot process

b. Amino acid codons for humans and bacteria are different

c. Human protein is formed but degraded by bacteria

17. Which of the following should be chosen for best yield if one were to

a. Laboratory flask of largest capacity

d. Any of the above

18. Who among the following was awarded the Nobel Prize for the

19. Which of the following statements does not hold for restriction

a. It recognises a palindromic nucleotide sequence

b. It is an endonuclease

c. It is isolated from viruses

d. It can produce the same kind of sticky ends in different DNA

1. How is copy number of the plasmid vector related to yield of recombinant protein?

Copy number decides the times to which the rDNA can be multiplied. More is the copy number higher amount of the recombinant protein is produced.

2. Would you choose an exonuclease while producing a recombinant DNA molecule?

No, exonuclease removes nucleotide from the end of the DNA strands.

4. Restriction enzymes should not have more than one site of action in the cloning site of a vector. Comment.

It would result in the formation of multiple fragments if a restriction enzyme would have more than one site of action.

5. What does ‘competent’ refer to incompetent cells used in transformation experiments?

6. What is the significance of adding proteases at the time of isolation of genetic material (DNA)?

Proteases are the enzymes which digest the protein present inside the cell. Proteases ensure the isolation of DNA without its contamination with proteins. Protein causes interference during downstream processing.

7. While doing a PCR, ‘denaturation’ step is missed. What will be its effect on the process?

If the denaturation step is missed, DNA strands would not separate from each other hence primer could not be added to the ends.

8. Name a recombinant vaccine that is currently being used in the vaccination program.

No. In the absence of water, biomolecules become dysfunctional.

10. What modification is done on the Ti plasmid of Agrobacterium tumefaciens to convert it into a cloning vector?

1. What is meant by gene cloning?

2. Both a winemaker and a molecular biologist that had developed a recombinant vaccine claim to be biotechnologists. Who in your opinion is correct?

Both are correct. The winemaker uses yeast to produce ethanol (natural phenomenon) whereas, a molecular Biologist uses vector with high copy number to produce a large number of antigens.

3. A recombinant DNA molecule was created by ligating a gene to a plasmid vector. By mistake, an exonuclease was added to the tube containing the recombinant DNA. How does this affect the next step in the experiment i.e. bacterial transformation?

If restriction enzymes don’t cut the DNA at specific positions, it would not produce sticky ends and construction of recombinant DNA would not be possible.

5. A plasmid DNA and a linear DNA (both are of the same size) have one site for a restriction endonuclease. When cut and separated on agarose gel electrophoresis, plasmid shows one DNA band while linear DNA shows two fragments. Explain.

6. How does one visualise DNA on an agarose gel?

DNA is made visible by staining it with Ethidium bromide, which on exposure with UV rays appears to be orange coloured bands.

7. A plasmid without a selectable marker was chosen as a vector for cloning a gene. How does this affect the experiment?

In the absence of a selectable marker, it would become difficult to distinguish between transformant and non-transformant cell.

8. A mixture of fragmented DNA was electrophoresed in an agarose gel. After staining the gel with ethidium bromide, no DNA bands were observed. What could be the reason?

Maybe the isolated DNA has been degraded during the isolation process or DNA has not been exposed to UV radiations after staining it with Ethidium bromide.

9. Describe the role of CaCl2 in the preparation of competent cells?

When Ca2+ ions are rubbed against the cell wall it results in enlargement of the diameter of the pores and allows the uptake of foreign DNA fragment.

10. What would happen when one grows a recombinant bacterium in a bioreactor but forget to add antibiotic to the medium in which the recombinant is growing?

In the absence of an antibiotic mixture of both transformants and non-transformants will be produced. It would result in the production of poor quality yield. 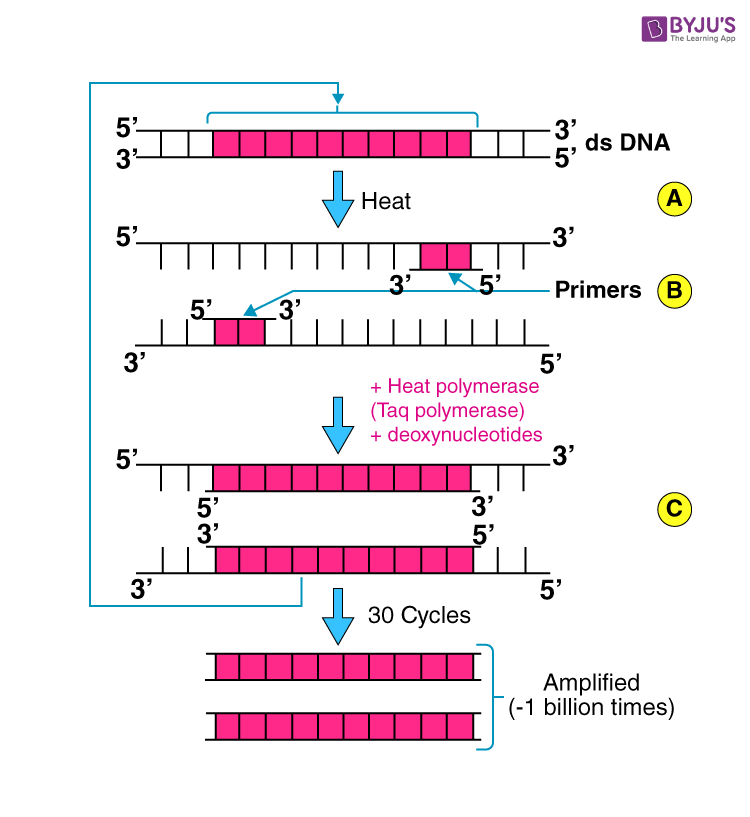 A. Denaturation- in this step double-stranded DNA is denatured at a high temperature of 94℃for 15 seconds.

B. Annealing-Primers are added to anneal. This is done at 450 C using Mg2+ ions.

C. Extension- Taq polymerase is used to extend the primer by adding nucleotides at a temperature of 72℃. 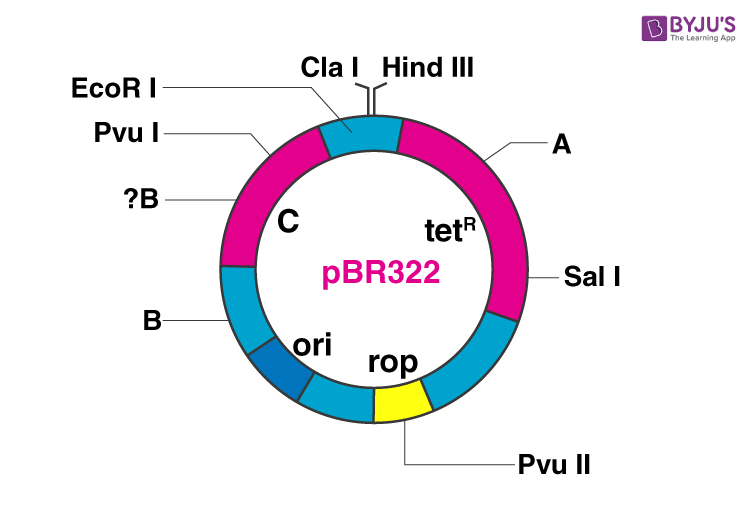 2. Describe the role of Agrobacterium tumefaciens in transforming a plant cell.

Agrobacterium tumefaciens is known to cause infection in plants especially in dicots.

The Ti plasmid of this bacterium induces tumour formation inside the plant cell and has been exploited for cloning of the gene of interest and stably integrating them in the plant genes. The DNA of Ti plasmid gets incorporated with the host cell DNA. However, to use it as a vector the tumour causing gene has been deleted by a molecular biologist.

3. Illustrate the design of a bioreactor. Highlight the difference between a flask in your laboratory and a bioreactor which allows cells to grow in a continuous culture system. Flask is used to small laboratory scale testing of culture and bioreactor is used for commercial-scale production.

In a flask, the small volume cultures cannot yield appreciable quantities of products whereas in bioreactor the large quantities can be cultured that is about volume 100-1000litres.

Biotechnology can be defined as the effective use of biology to create products and technologies for the welfare of human beings. The rise of genetic engineering along with the creation of vaccines help give rise to the field of modern biotechnology. Used in a variety of different fields such as Waste management, Energy Production, Therapeutics etc.

Some of the major applications of Biotechnology are;

Biotechnology is an interesting subject but it’s hard to memorise the concepts. In order to make you learn comprehensively and to help you memorise the concept for a long period of time BYJU’S bring you videos, animations, notes, study materials, NCERT EXEMPLAR, NCERT SOLUTIONS , Sample papers, worksheets and HOTS.