NCERT class 12 Chemistry exemplar for chapter 16 Chemistry in Everyday Life gives you advance knowledge of the concepts involved in Chemistry in Everyday Life chapter. IT provides necessary questions that help you understand the concept completely. Understanding the concept will help you in making your own chemistry in everyday life chapter notes which in-turn will help you in scoring good marks in the examination. NCERT class 12 Chemistry exemplar for chapter 16 pdf are prepared by Chemistry teacher of BYJU’S who has decades of experience NCERT chemistry. This solution is a result of referring to various books, question papers and sample papers. Studying this NCERT Class 12 exemplar is very important in order to prepare well for the graduate entrance examinations. 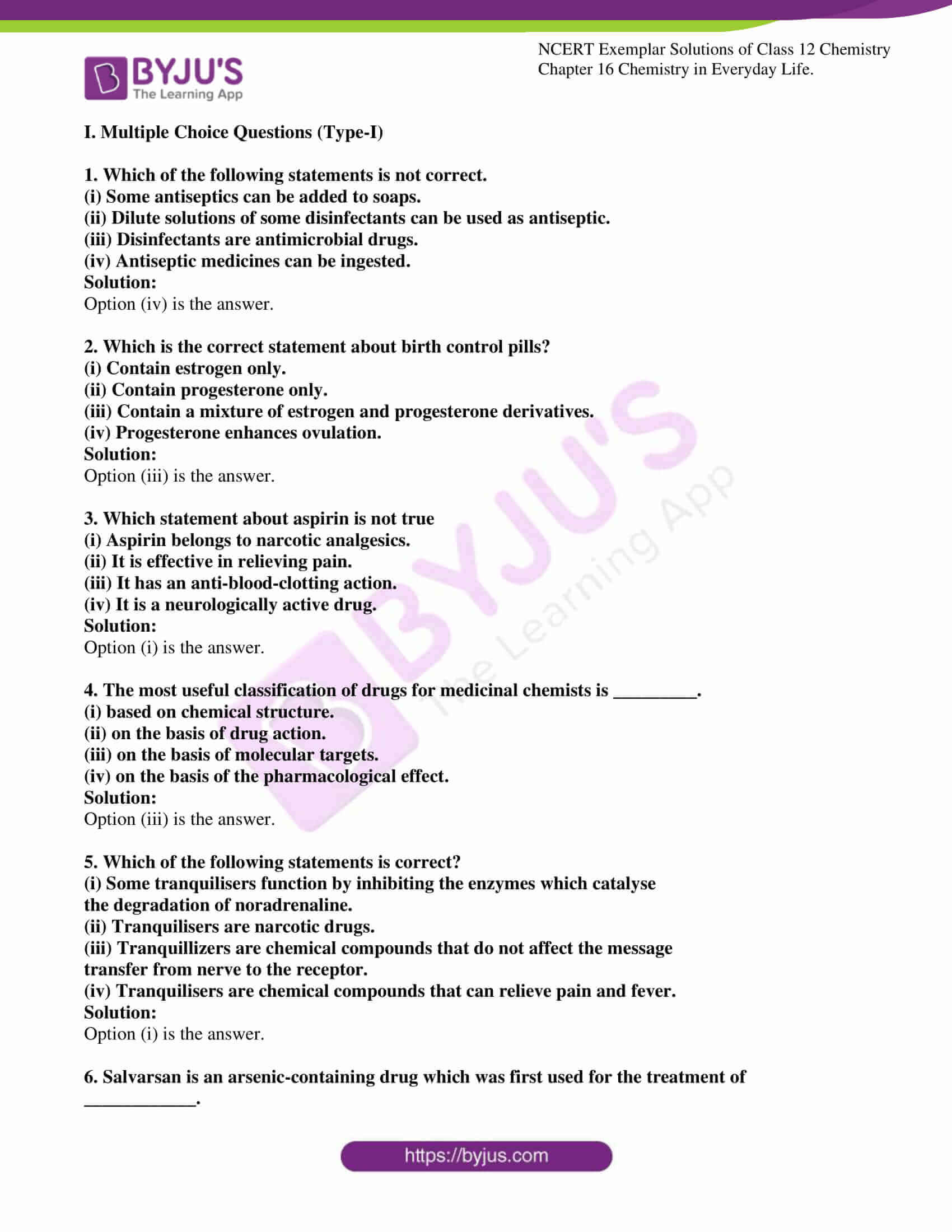 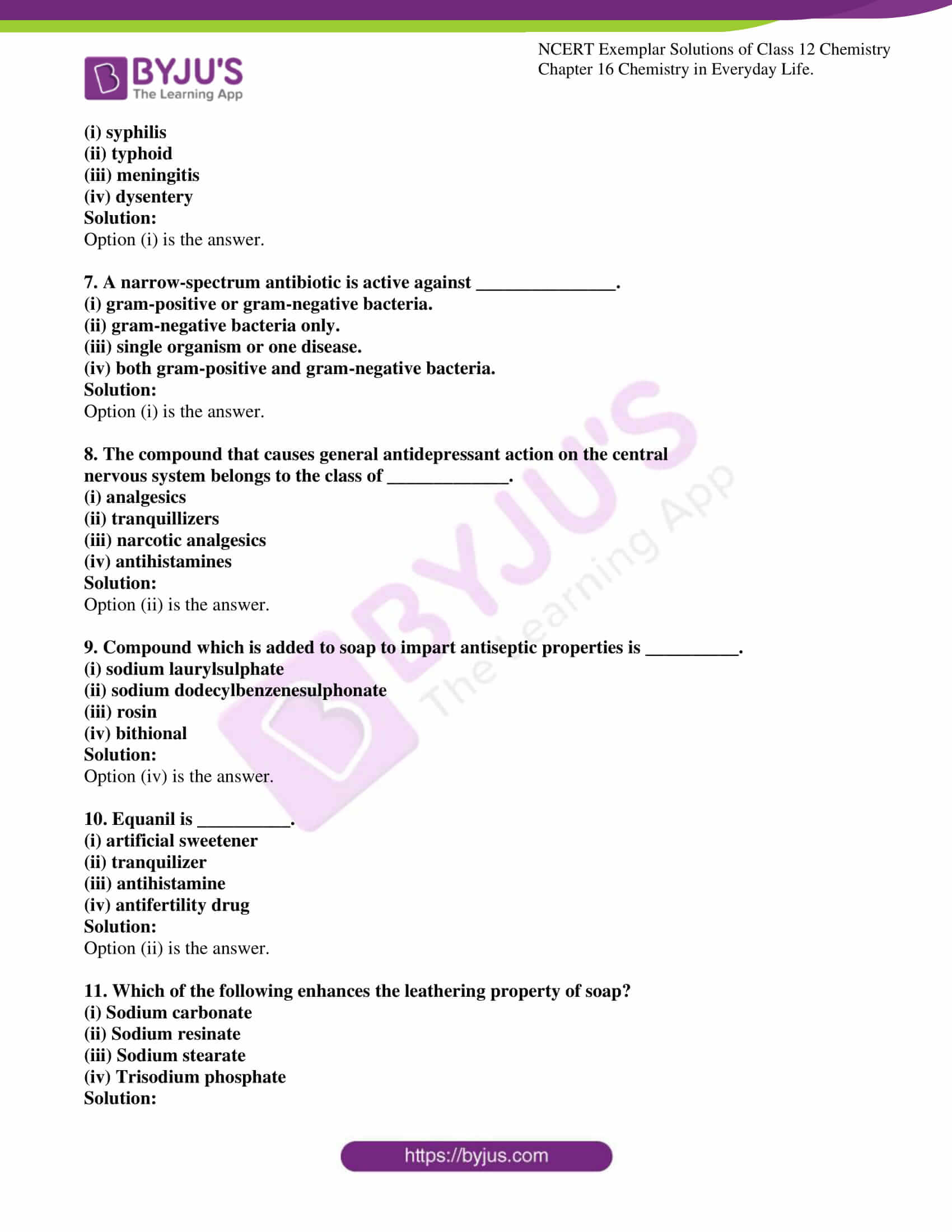 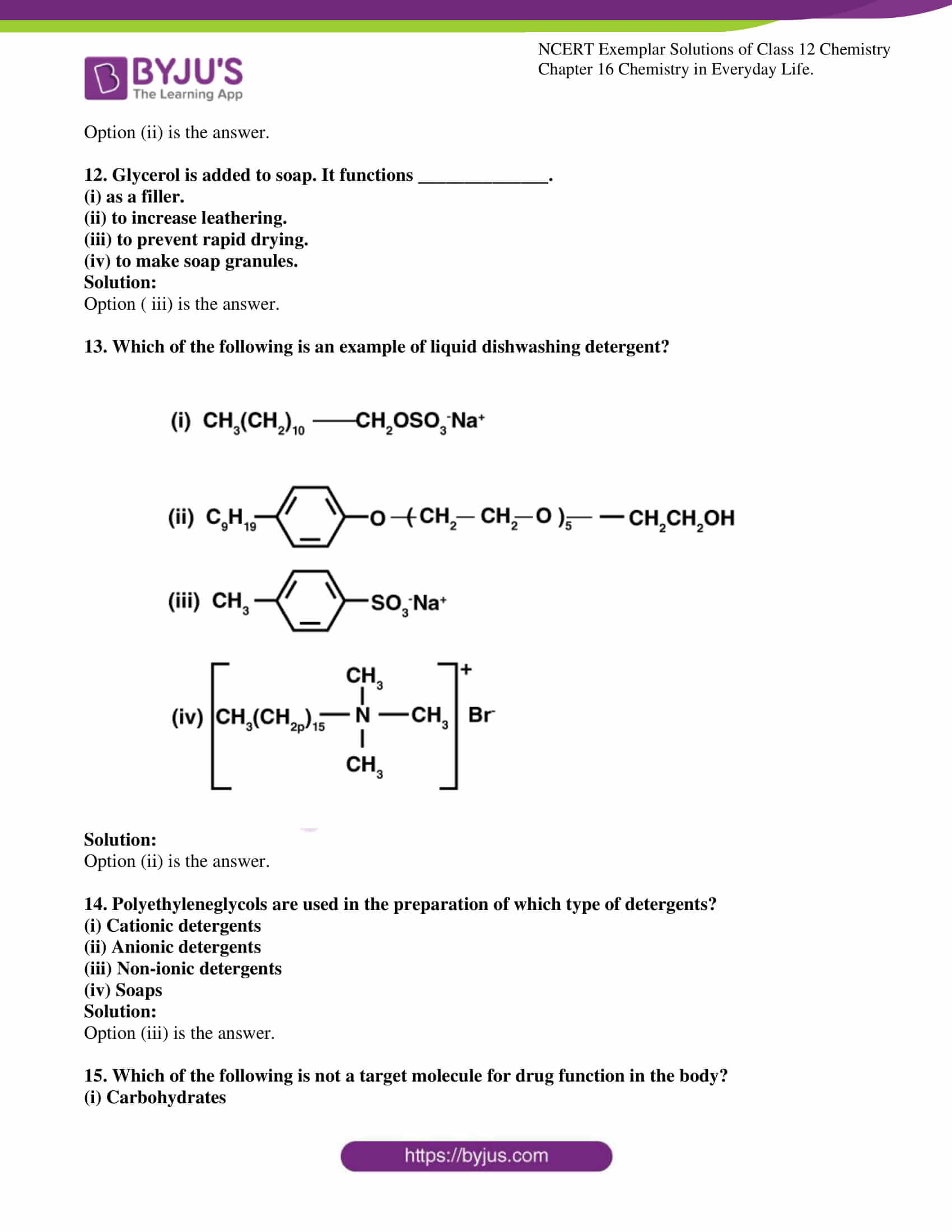 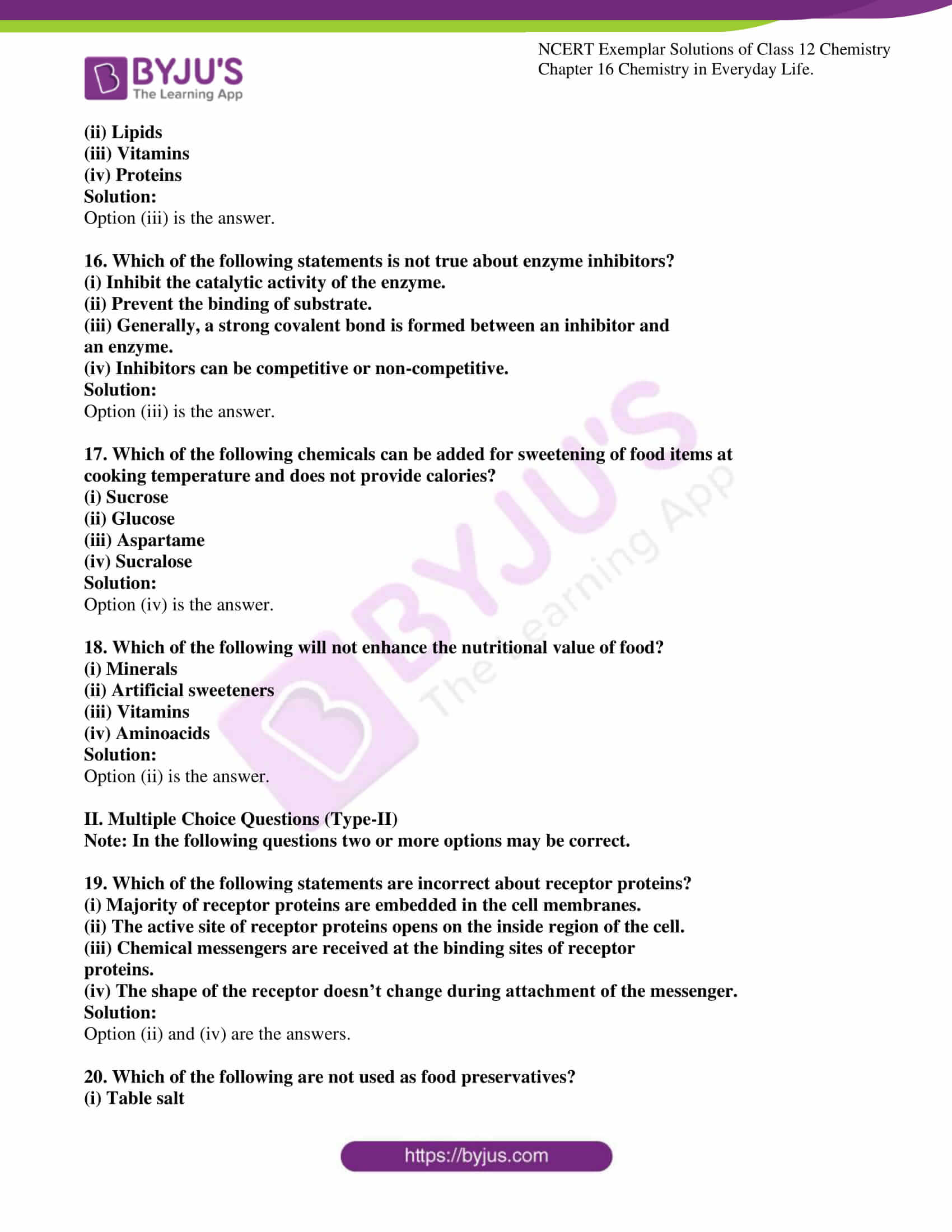 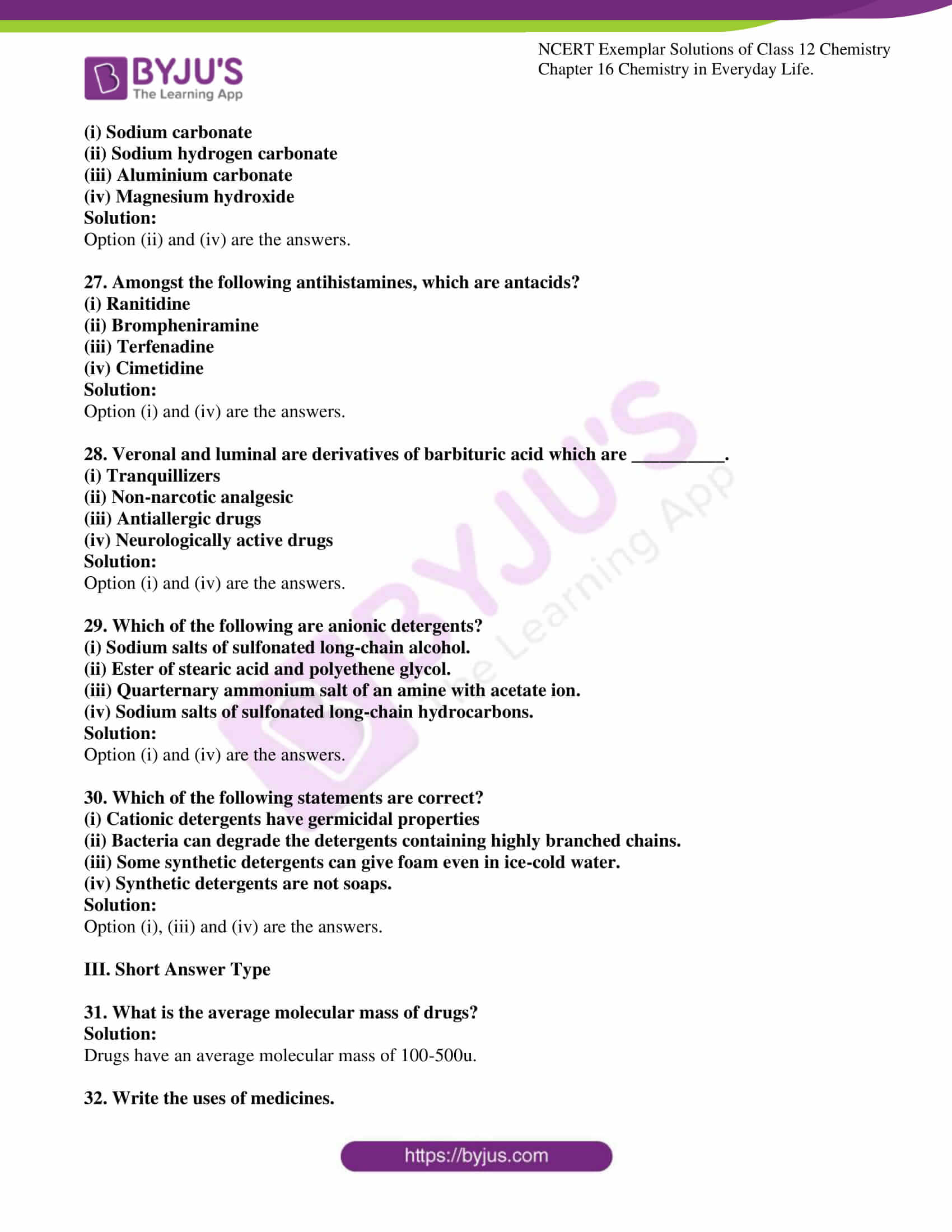 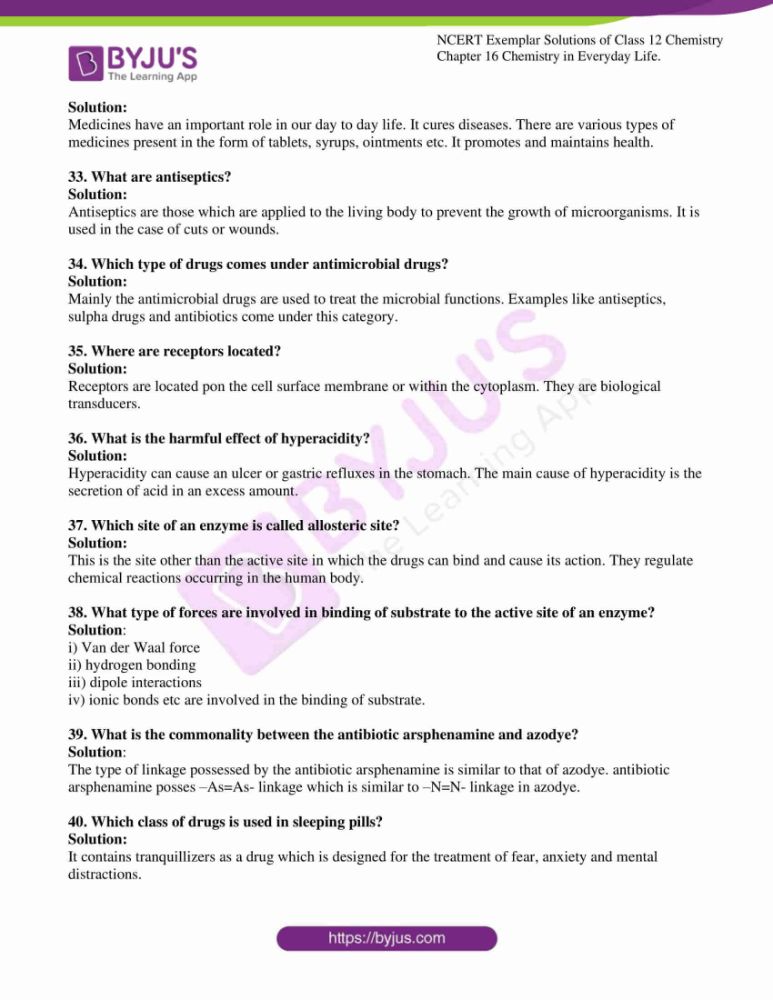 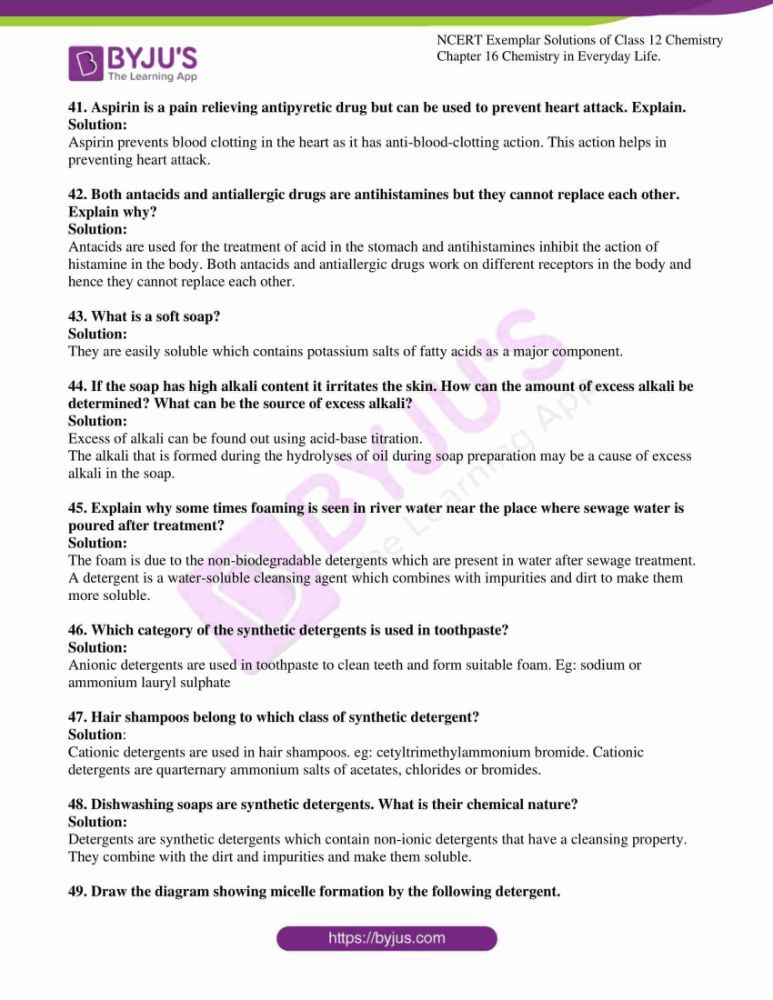 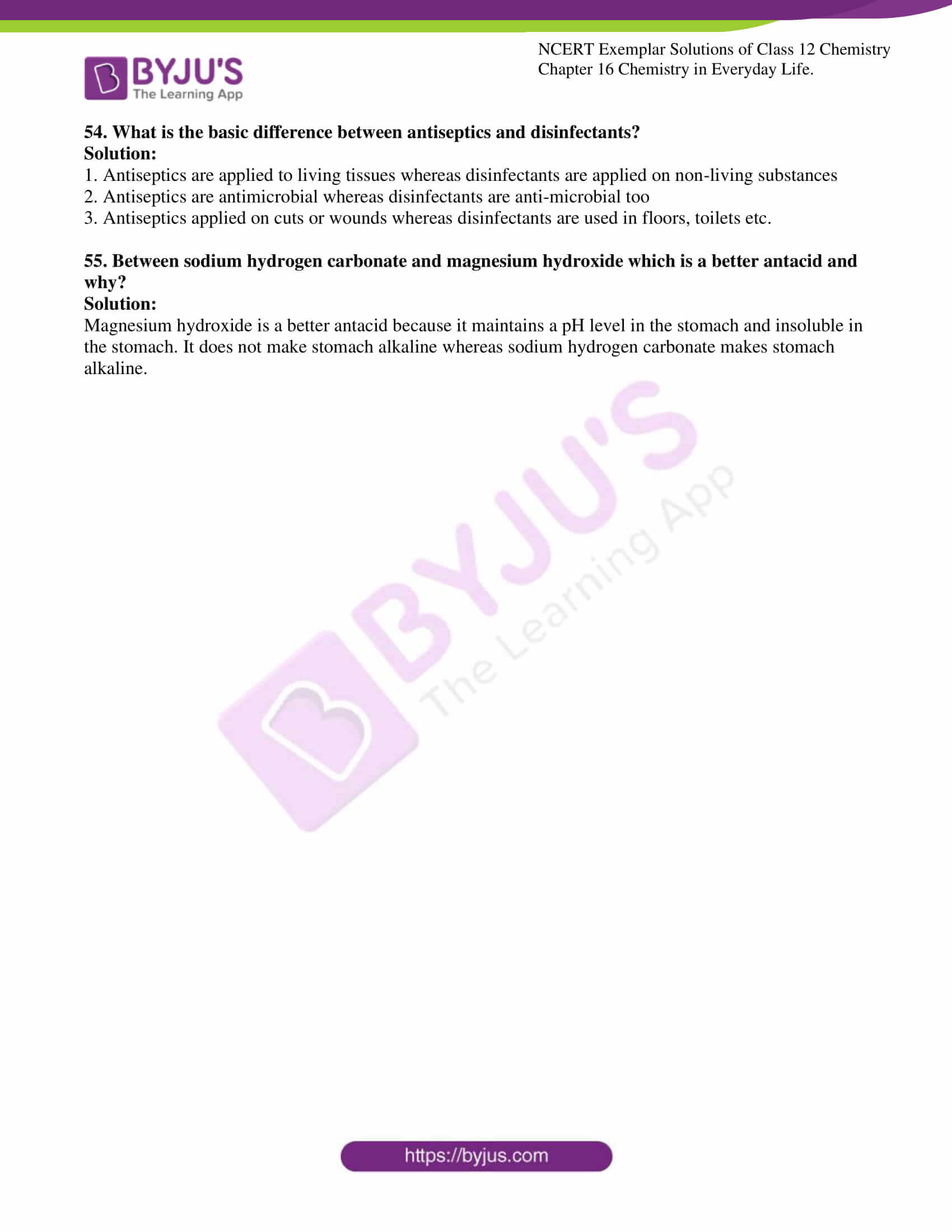 1. Which of the following statements is not correct.

(i) Some antiseptics can be added to soaps.

(ii) Dilute solutions of some disinfectants can be used as antiseptic.

(iv) Antiseptic medicines can be ingested.

2. Which is the correct statement about birth control pills?

(i) Contain estrogen only.

(iii) Contain a mixture of estrogen and progesterone derivatives.

3. Which statement about aspirin is not true

(i) Aspirin belongs to narcotic analgesics.

(ii) It is effective in relieving pain.

(iii) It has an anti-blood-clotting action.

(iv) It is a neurologically active drug.

4. The most useful classification of drugs for medicinal chemists is _________.

(i) based on chemical structure.

(ii) on the basis of drug action.

(iii) on the basis of molecular targets.

(iv) on the basis of the pharmacological effect.Solution:

5. Which of the following statements is correct?

(i) Some tranquilisers function by inhibiting the enzymes which catalyse

the degradation of noradrenaline.

(iii) Tranquillizers are chemical compounds that do not affect the message

transfer from nerve to the receptor.

(iv) Tranquilisers are chemical compounds that can relieve pain and fever.Solution:

6. Salvarsan is an arsenic-containing drug which was first used for the treatment of

(i) gram-positive or gram-negative bacteria.

(iii) single organism or one disease.

(iv) both gram-positive and gram-negative bacteria.

8. The compound that causes general antidepressant action on the central

11. Which of the following enhances the leathering property of soap?

Option ( iii) is the answer.

13. Which of the following is an example of liquid dishwashing detergent? 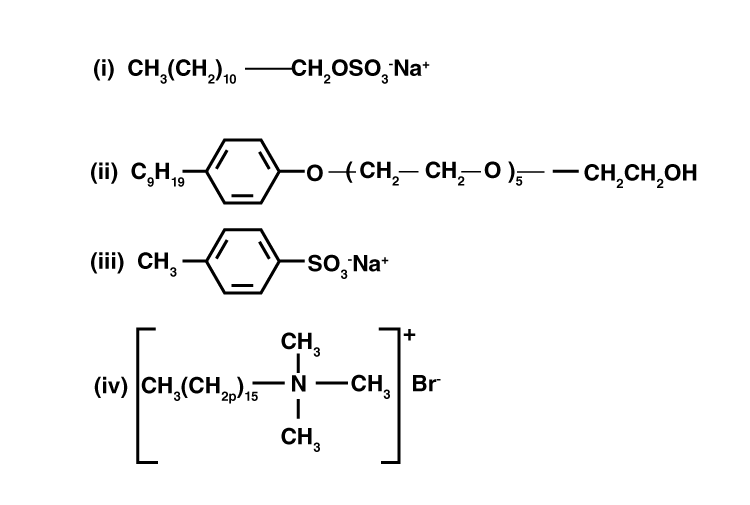 14. Polyethyleneglycols are used in the preparation of which type of detergents?

15. Which of the following is not a target molecule for drug function in the body?

16. Which of the following statements is not true about enzyme inhibitors?

(i) Inhibit the catalytic activity of the enzyme.

(ii) Prevent the binding of substrate.

(iii) Generally, a strong covalent bond is formed between an inhibitor and

(iv) Inhibitors can be competitive or non-competitive.

17. Which of the following chemicals can be added for sweetening of food items at

cooking temperature and does not provide calories?

18. Which of the following will not enhance the nutritional value of food?

19. Which of the following statements are incorrect about receptor proteins?

(i) Majority of receptor proteins are embedded in the cell membranes.

(ii) The active site of receptor proteins opens on the inside region of the cell.

(iii) Chemical messengers are received at the binding sites of receptor

(iv) The shape of the receptor doesn’t change during attachment of the messenger.

20. Which of the following are not used as food preservatives?

22. Which of the following statements are correct about barbiturates?

(i) Hypnotics or sleep producing agents.

(ii) These are tranquillizers.

23. Which of the following are sulpha drugs?

24. Which of the following are antidepressants?

25. Which of the following statements are incorrect about penicillin?

(i) An antibacterial fungus.

(ii) Ampicillin is its synthetic modification.

(iii) It has a bacteriostatic effect.

(iv) It is a broad-spectrum antibiotic.

26. Which of the following compounds are administered as antacids?

27. Amongst the following antihistamines, which are antacids?

29. Which of the following are anionic detergents?

(iii) Quarternary ammonium salt of an amine with acetate ion.

30. Which of the following statements are correct?

(i) Cationic detergents have germicidal properties

(iii) Some synthetic detergents can give foam even in ice-cold water.

(iv) Synthetic detergents are not soaps.Solution:

31. What is the average molecular mass of drugs?

32. Write the uses of medicines.

Medicines have an important role in our day to day life. It cures diseases. There are various types of medicines present in the form of tablets, syrups, ointments etc. It promotes and maintains health.

Antiseptics are those which are applied to the living body to prevent the growth of microorganisms. It is used in the case of cuts or wounds.

34. Which type of drugs comes under antimicrobial drugs?

Mainly the antimicrobial drugs are used to treat the microbial functions. Examples like antiseptics, sulpha drugs and antibiotics come under this category.

35. Where are receptors located?

Receptors are located pon the cell surface membrane or within the cytoplasm. They are biological transducers.

36. What is the harmful effect of hyperacidity?

Hyperacidity can cause an ulcer or gastric refluxes in the stomach. The main cause of hyperacidity is the secretion of acid in an excess amount.

37. Which site of an enzyme is called allosteric site?

This is the site other than the active site in which the drugs can bind and cause its action. They regulate chemical reactions occurring in the human body.

38. What type of forces are involved in binding of substrate to the active site of an enzyme?

iv) ionic bonds etc are involved in the binding of substrate.

39. What is the commonality between the antibiotic arsphenamine and azodye?

40. Which class of drugs is used in sleeping pills?

It contains tranquillizers as a drug which is designed for the treatment of fear, anxiety and mental distractions.

41. Aspirin is a pain relieving antipyretic drug but can be used to prevent heart attack. Explain.

Aspirin prevents blood clotting in the heart as it has anti-blood-clotting action. This action helps in preventing heart attack.

42. Both antacids and antiallergic drugs are antihistamines but they cannot replace each other. Explain why?

Antacids are used for the treatment of acid in the stomach and antihistamines inhibit the action of histamine in the body. Both antacids and antiallergic drugs work on different receptors in the body and hence they cannot replace each other.

They are easily soluble which contains potassium salts of fatty acids as a major component.

Excess of alkali can be found out using acid-base titration.

The alkali that is formed during the hydrolyses of oil during soap preparation may be a cause of excess alkali in the soap.

45. Explain why some times foaming is seen in river water near the place where sewage water is poured after treatment?

The foam is due to the non-biodegradable detergents which are present in water after sewage treatment. A detergent is a water-soluble cleansing agent which combines with impurities and dirt to make them more soluble.

46. Which category of the synthetic detergents is used in toothpaste?

47. Hair shampoos belong to which class of synthetic detergent?

48. Dishwashing soaps are synthetic detergents. What is their chemical nature?

Detergents are synthetic detergents which contain non-ionic detergents that have a cleansing property. They combine with the dirt and impurities and make them soluble. 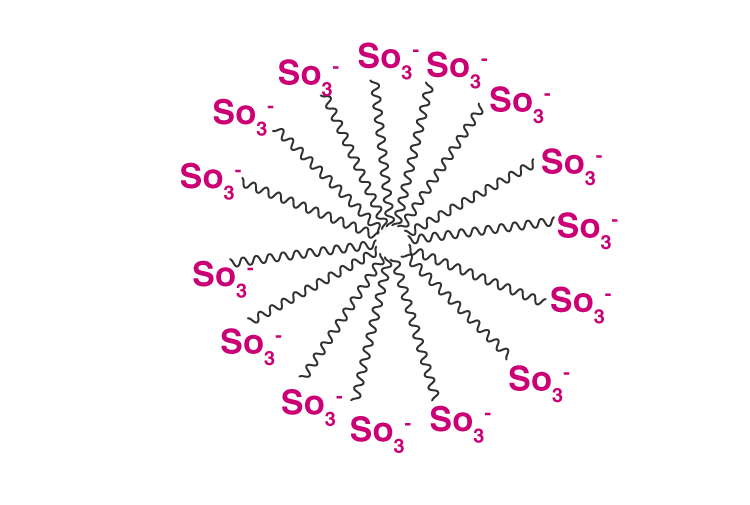 50. How does the branching of the hydrocarbon chain of synthetic detergents affect their biodegradability?

51. Why is it safer to use soap from the environmental point of view?

When compared to the detergents soaps are safer to use which is biodegradable. It doesn’t have a polluting nature.

The analgesics drug is a neurologically active drug which is used to reduce pain. They don’t have any side effects.

53. What is the scientific explanation for the feeling of depression?

A hormone called Noradrenaline controls the mood swings. Depression can be caused due to the low level of noradrenaline which hampers the signal activities in the brain.

54. What is the basic difference between antiseptics and disinfectants?

2. Antiseptics are antimicrobial whereas disinfectants are anti-microbial too

3. Antiseptics applied on cuts or wounds whereas disinfectants are used in floors, toilets etc.

55. Between sodium hydrogen carbonate and magnesium hydroxide which is a better antacid and why?

Chemistry in everyday life is one of the easiest and interesting chapters of CBSE class 12. In this chapter, students will learn how chemical compounds are helping humanity to live and stay healthy.

To score good marks in the exam and to understand the chapter solve NCERT exemplar class 12 chemistry chapter 16 chemistry in Everyday life. Students are required to be thorough with all the concepts included in this NCERT class 12 Chemistry exemplar for chapter 16 and get confident to solve related questions with ease. Exemplar question for class 12 Chemistry chapter 16 given here will help students to get acquainted with the best answers and develop problem-solving abilities.

Register with BYJU’S to get complete NCERT solutions of all the CBSE classes and subjects, and get additional assistance for the CBSE exams.