NCERT Class 12 Physics exemplar for Chapter 8 pdf has MCQ’S, fill in the blanks, Numerical problems, Worksheets, HOTS, tips and tricks that help you understand the topic from the exam point of view. This will help you score good marks in CBSE Board class 12 examination and entrance exams like NEET, JEE. 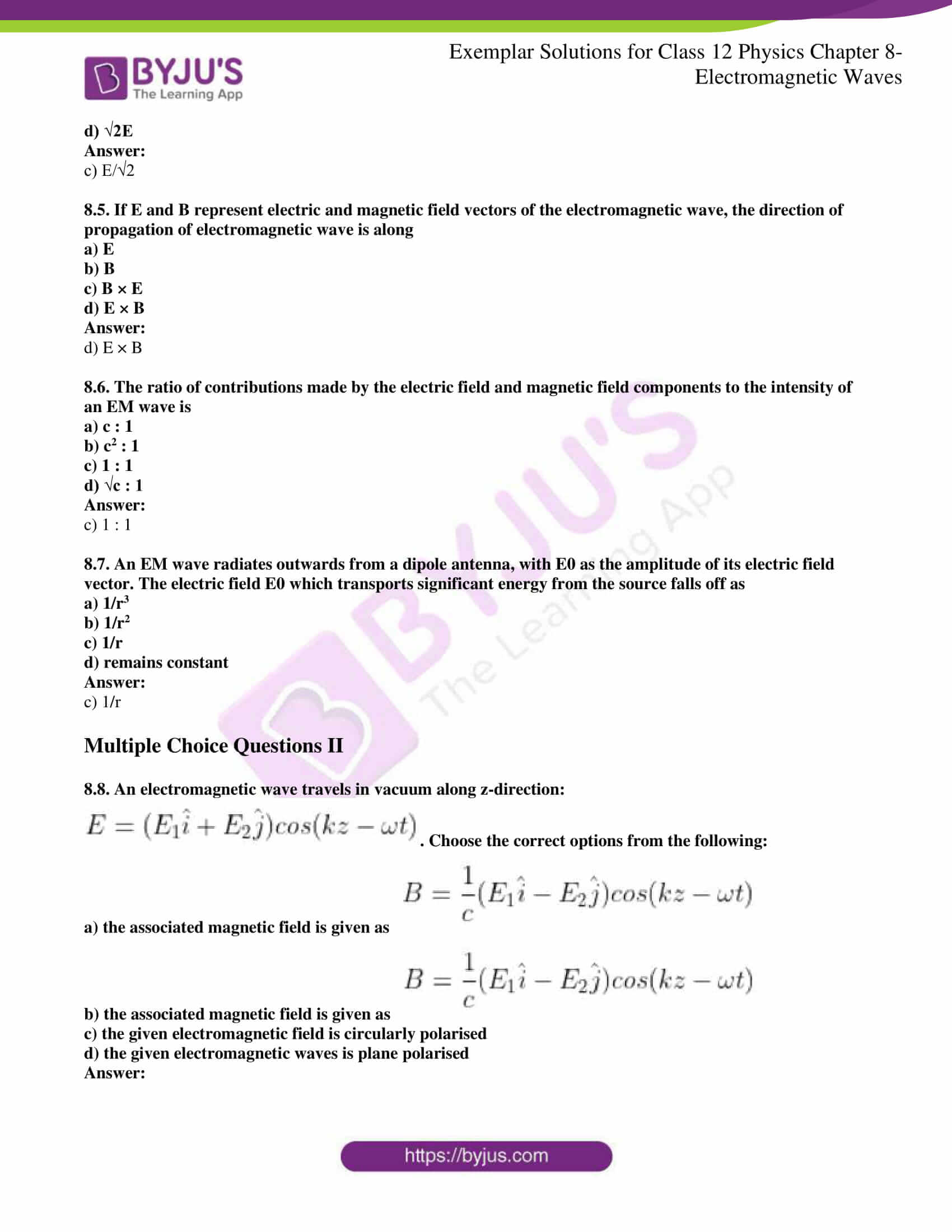 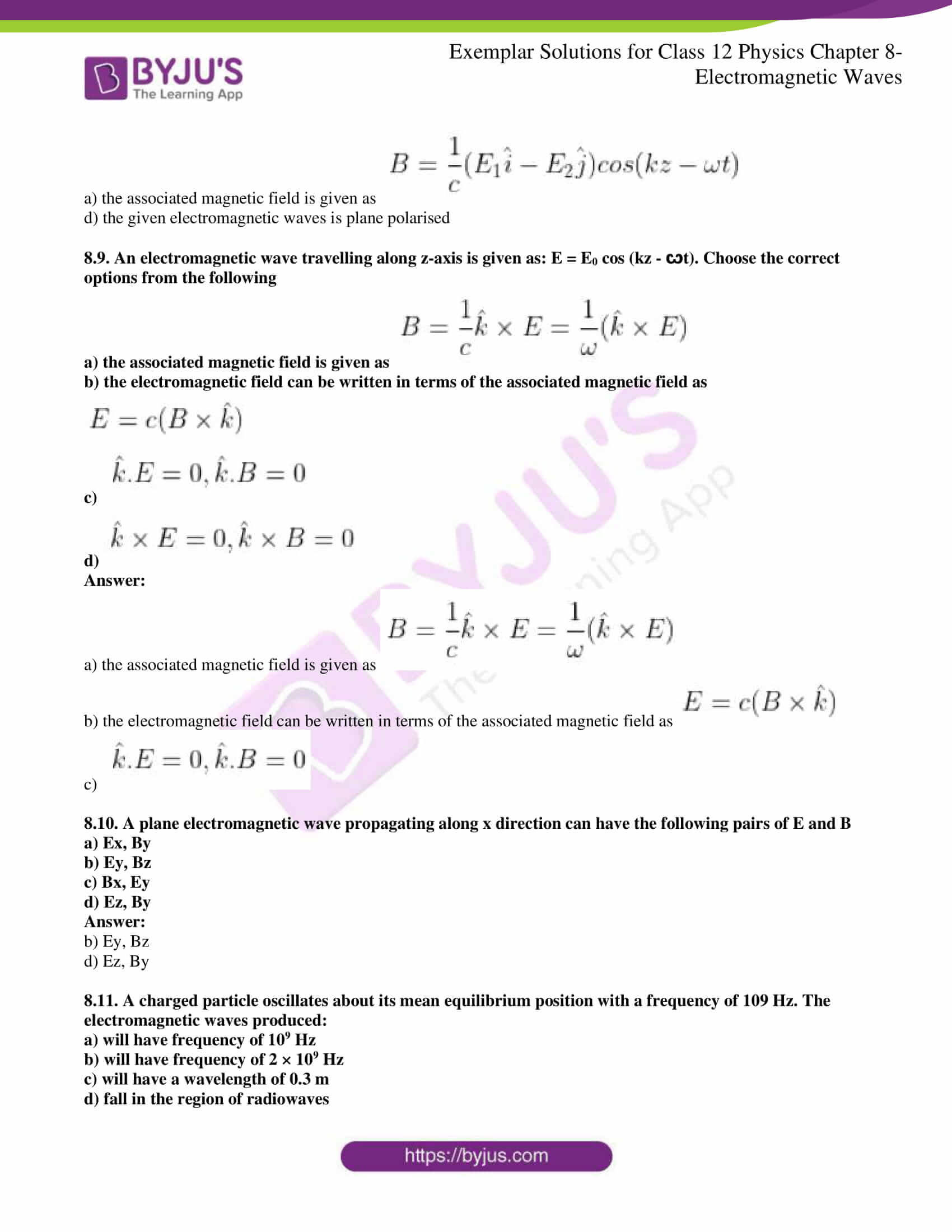 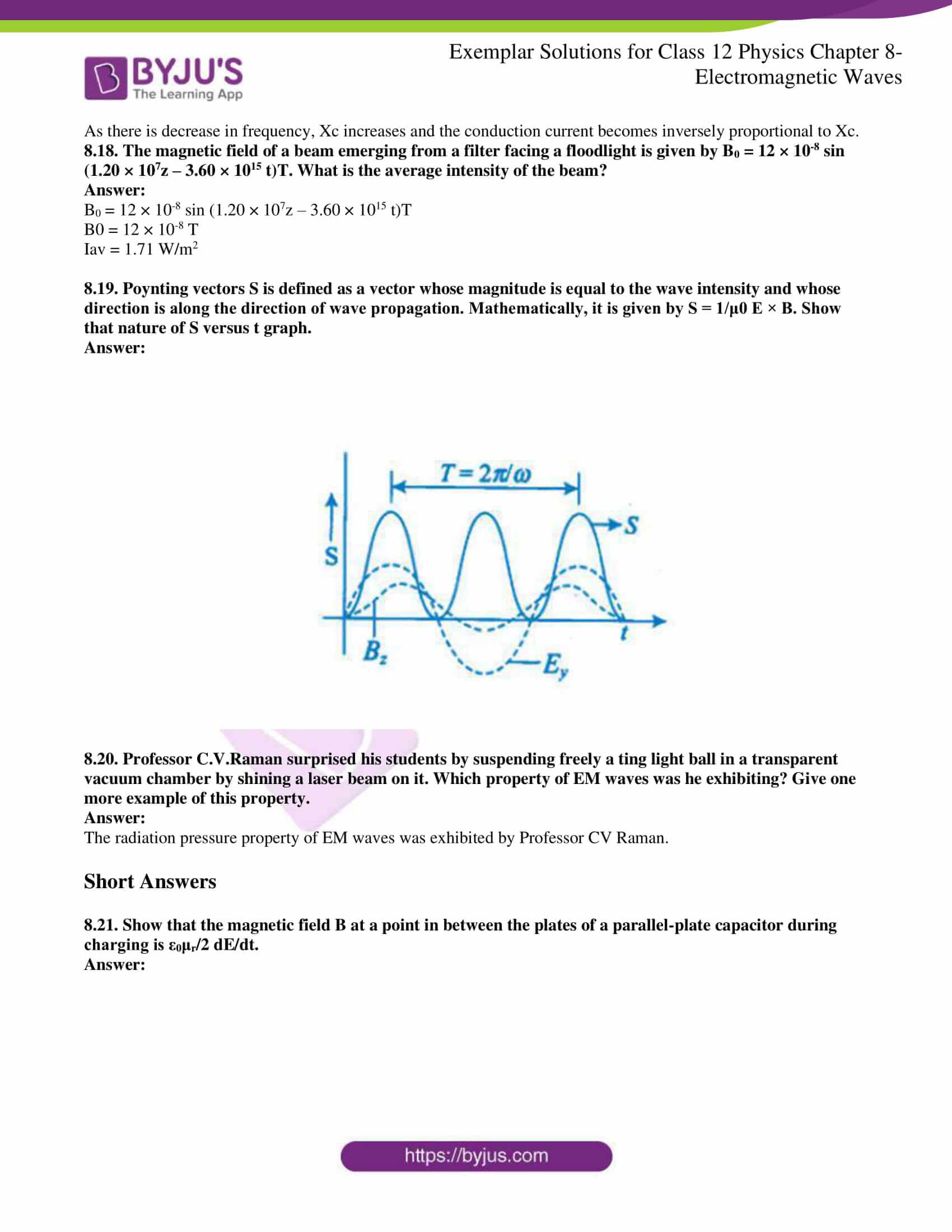 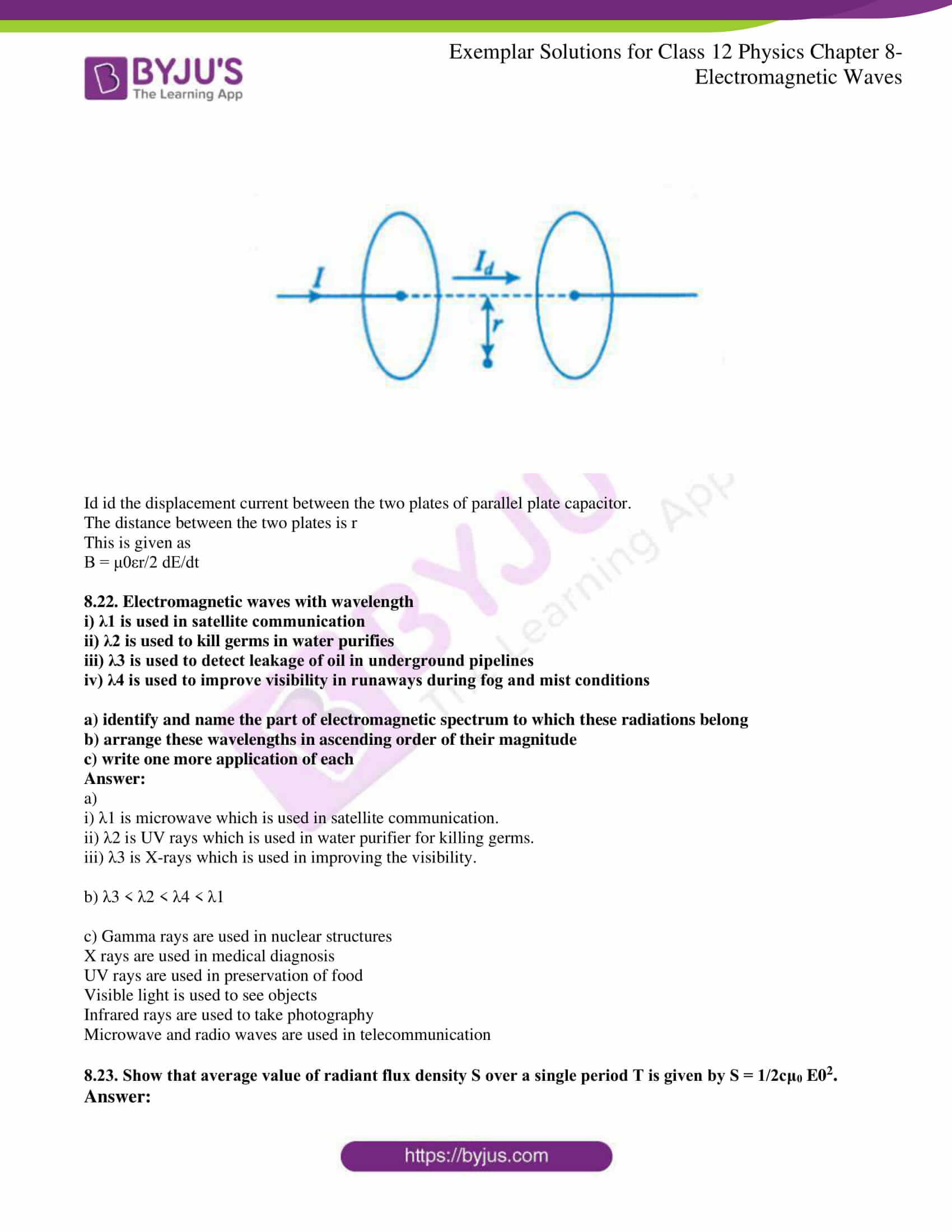 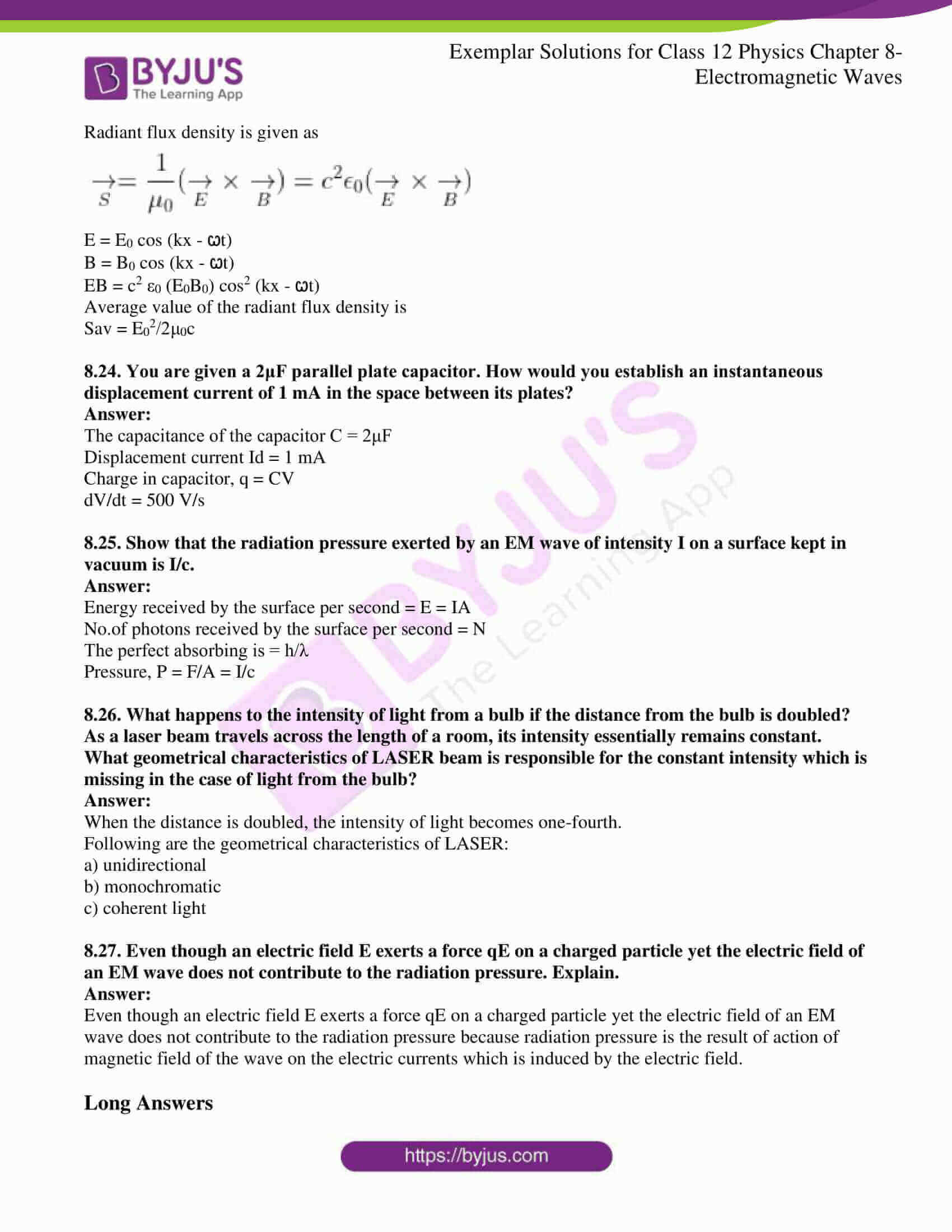 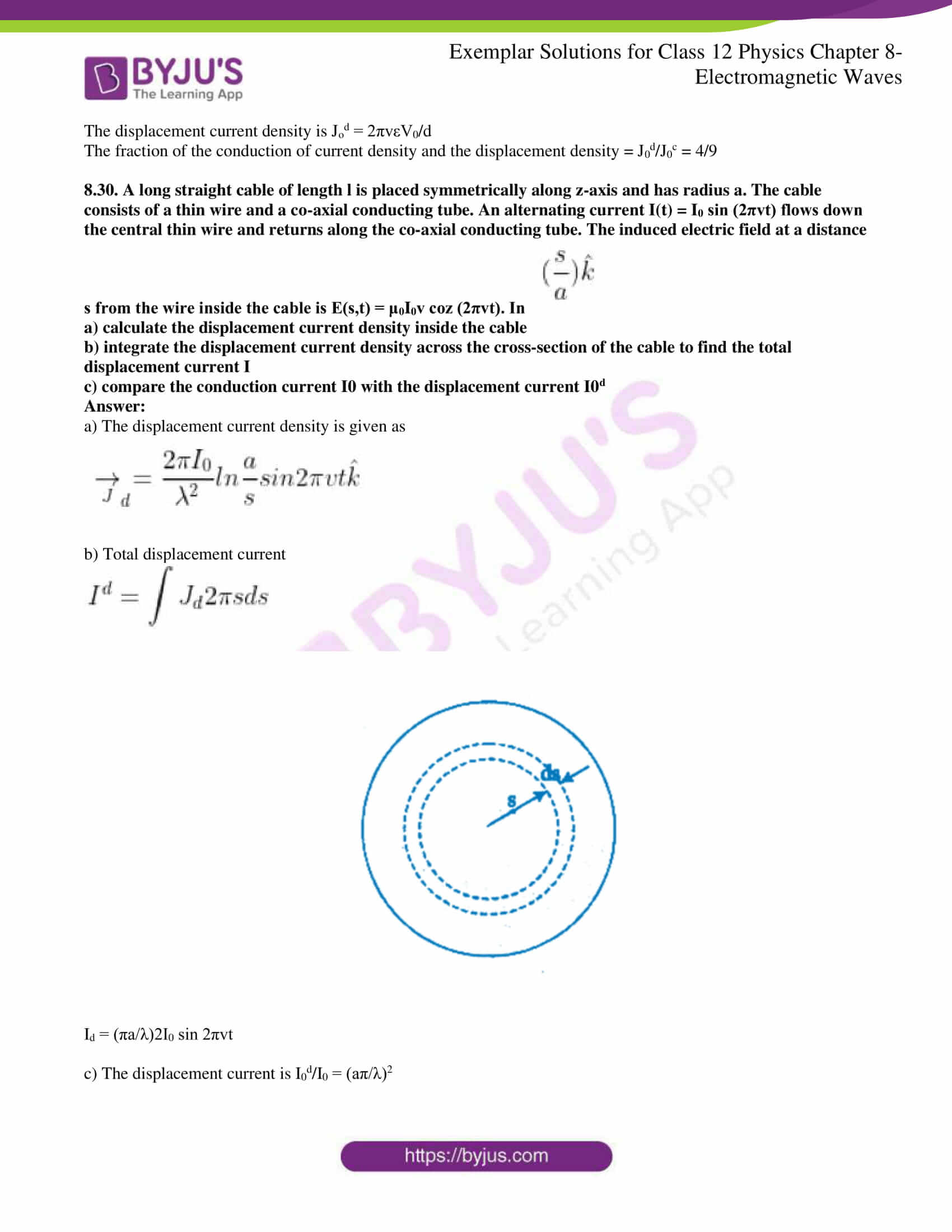 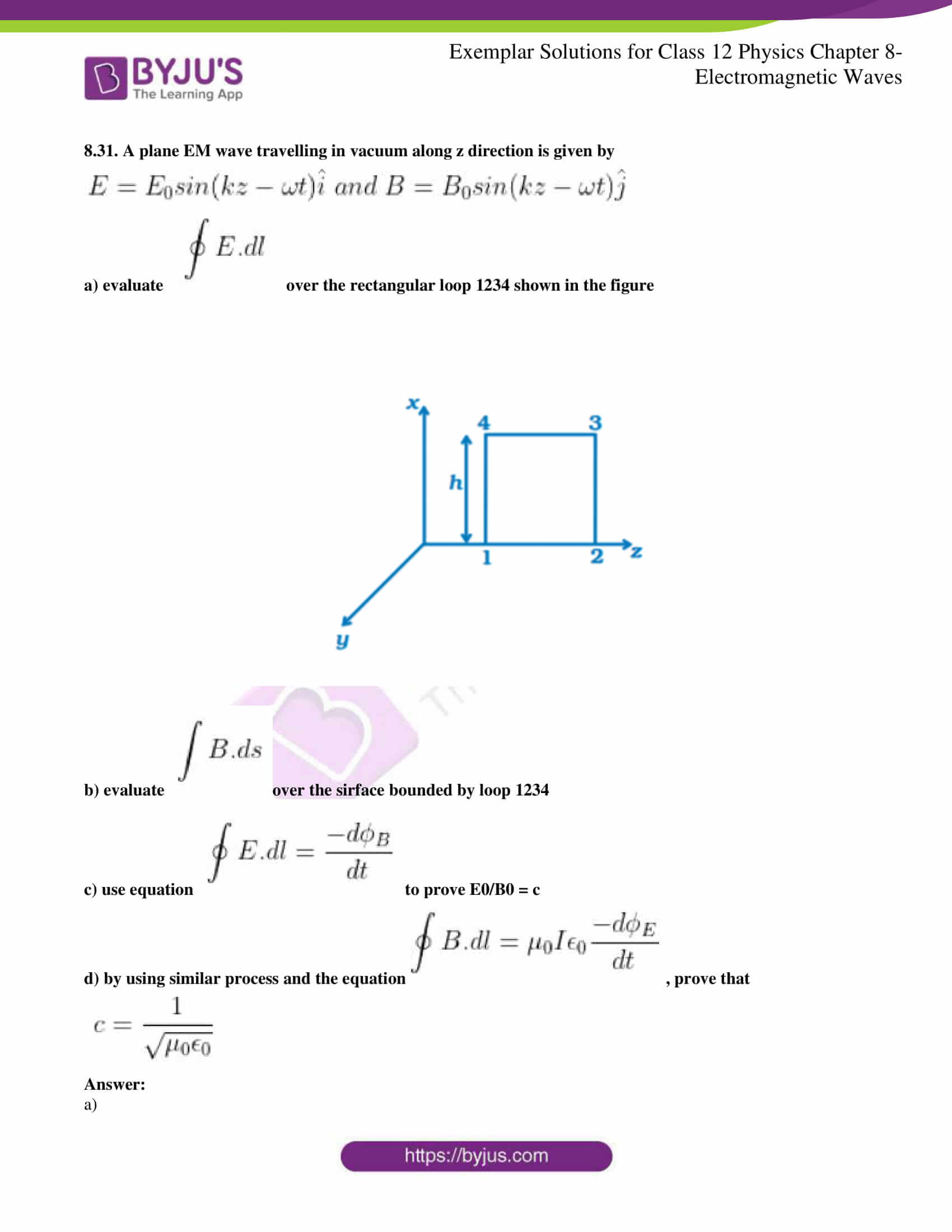 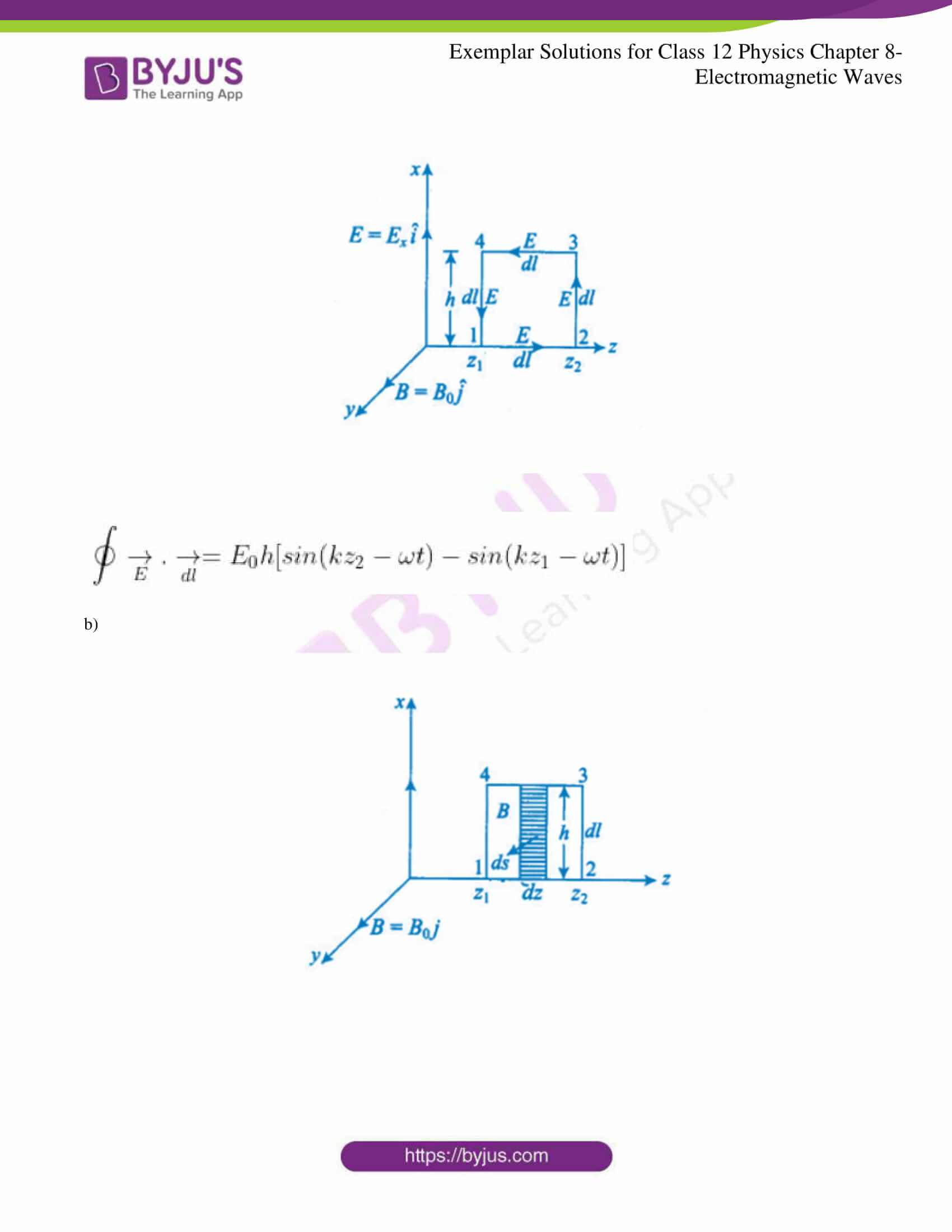 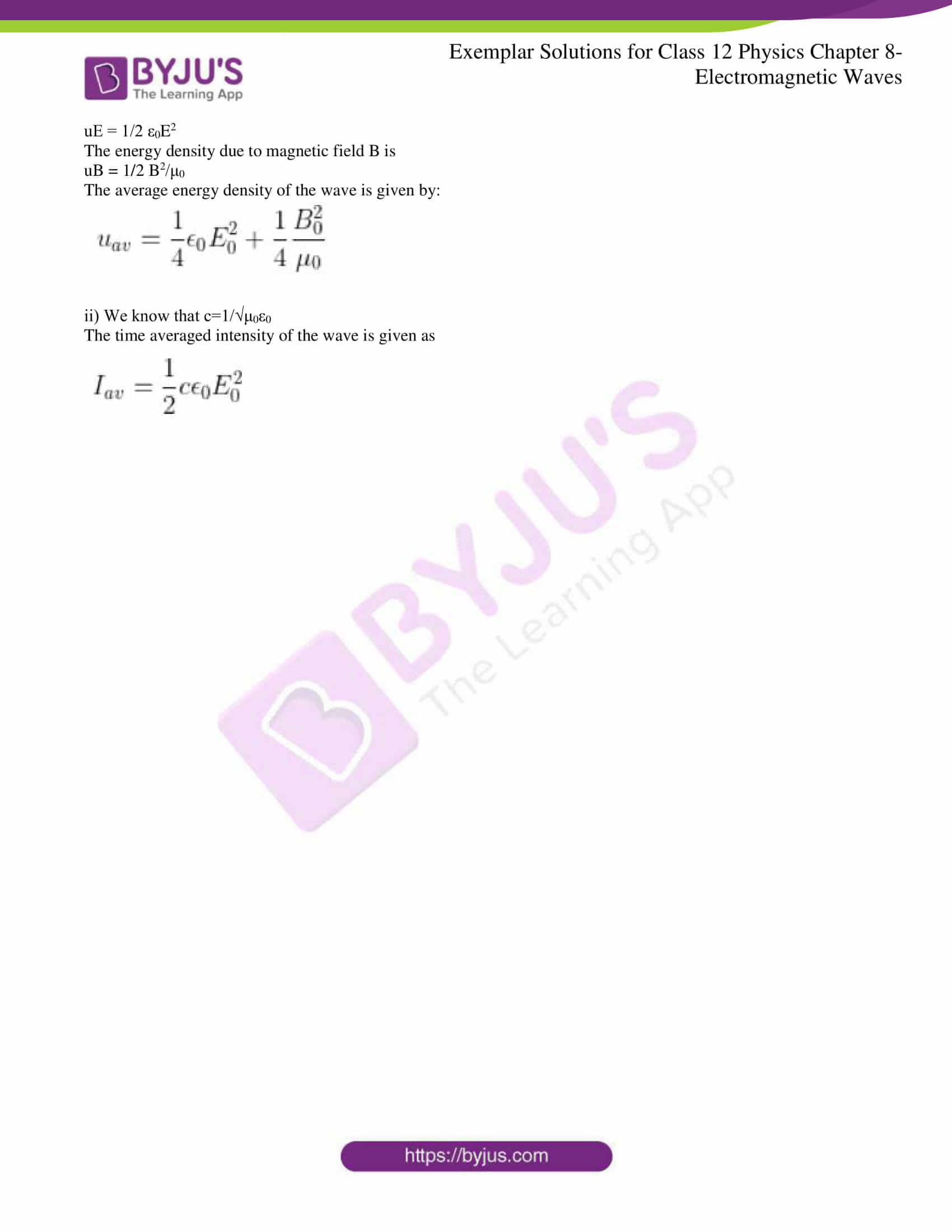 8.1. One requires 11eV of energy to dissociate a carbon monoxide molecule into carbon and oxygen atoms. The minimum frequency of the appropriate electromagnetic radiation to achieve the dissociation lies in

8.2. A linearly polarized electromagnetic wave given as

is incident normally on a perfectly reflecting infinite wall at z = a. Assuming that the material of the wall is optically inactive, the reflected wave will be given as

8.3. Light with an energy flux of 20 W/cm2 falls on a non-reflecting surface at normal incidence. If the surface has an area of 30cm2, the total momentum delivered during 30 minutes is

8.6. The ratio of contributions made by the electric field and magnetic field components to the intensity of an EM wave is

8.7. An EM wave radiates outwards from a dipole antenna, with E0 as the amplitude of its electric field vector. The electric field E0 which transports significant energy from the source falls off as

8.8. An electromagnetic wave travels in vacuum along z-direction:

. Choose the correct options from the following:

b) the associated magnetic field is given as

c) the given electromagnetic field is circularly polarised

d) the given electromagnetic waves is plane polarised

d) the given electromagnetic waves is plane polarised

8.9. An electromagnetic wave travelling along the z-axis is given as: E = E0 cos (kz – ꞷt). Choose the correct options from the following

8.10. A plane electromagnetic wave propagating along x-direction can have the following pairs of E and B

8.11. A charged particle oscillates about its mean equilibrium position with a frequency of 109 Hz. The electromagnetic waves produced:

d) fall in the region of radiowaves

d) fall in the region of radiowaves

8.12. The source of electromagnetic waves can be a charge

a) moving with a constant velocity

b) moving in a circular orbit

d) falling in an electric field

b) moving in a circular orbit

d) falling in an electric field

8.13. An EM wave of intensity I falls on a surface kept in vacuum and exerts radiation pressure p on it. Which of the following are true?

8.14. Why is the orientation of the portable radio with respect to broadcasting station important?

The orientation of the portable radio with respect to the broadcasting station is important because the electromagnetic waves are plane polarised and the antenna should be placed parallel to the vibration of the electric or magnetic field of the wave.

8.15. Why does a microwave oven heats up a food item containing water molecules most efficiently?

8.16. The charge on a parallel plate capacitor varies as q = q0 cos 2πvt. The plates are very large and close together. Neglecting the edge effects, find the displacement current through the capacitor?

The displacement current through the capacitor is Id = Ic = dq/dt

8.17. A variable frequency a.c source is connected to a capacitor. How will the displacement current change with a decrease in frequency?

As there is a decrease in frequency, Xc increases and the conduction current becomes inversely proportional to Xc.

8.19. Poynting vectors S is defined as a vector whose magnitude is equal to the wave intensity and whose direction is along the direction of wave propagation. Mathematically, it is given by S = 1/μ0 E × B. Show that nature of S versus t graph.

8.20. Professor C.V.Raman surprised his students by suspending freely a ting light ball in a transparent vacuum chamber by shining a laser beam on it. Which property of EM waves was he exhibiting? Give one more example of this property.

The radiation pressure property of EM waves was exhibited by Professor CV Raman.

8.21. Show that the magnetic field B at a point in between the plates of a parallel-plate capacitor during charging is ε0μr/2 dE/dt.

Id is the displacement current between the two plates of a parallel plate capacitor.

The distance between the two plates is r

This is given as

i) λ1 is used in satellite communication

ii) λ2 is used to kill germs in water purifies

b) arrange these wavelengths in ascending order of their magnitude

c) write one more application of each

i) λ1 is a microwave which is used in satellite communication.

ii) λ2 is UV rays which is used in a water purifier for killing germs.

iii) λ3 is X-rays which is used in improving the visibility.

UV rays are used in the preservation of food

Microwave and radio waves are used in telecommunication

Radiant flux density is given as

Average value of the radiant flux density is

8.24. You are given a 2μF parallel plate capacitor. How would you establish an instantaneous displacement current of 1 mA in the space between its plates?

The capacitance of the capacitor C = 2μF

8.25. Show that the radiation pressure exerted by an EM wave of intensity I on a surface kept in vacuum is I/c.

Energy received by the surface per second = E = IA

No.of photons received by the surface per second = N

The perfect absorbing is = h/λ

8.26. What happens to the intensity of light from a bulb if the distance from the bulb is doubled? As a laser beam travels across the length of a room, its intensity essentially remains constant. What geometrical characteristics of the LASER beam is responsible for the constant intensity which is missing in the case of light from the bulb?

When the distance is doubled, the intensity of light becomes one-fourth.

Following are the geometrical characteristics of the LASER:

8.27. Even though an electric field E exerts a force qE on a charged particle yet the electric field of an EM wave does not contribute to the radiation pressure. Explain.

8.28. An infinitely long thin wire carrying a uniform linear static charge density λ is placed along the z-axis. The wire is set into motion along its length with a uniform velocity

The electric field in an infinitely long thin wire is

Magnetic field due to the wire is

The equivalent current flowing through the wire is

8.30. A long straight cable of length l is placed symmetrically along the z-axis and has radius a. The cable consists of a thin wire and a co-axial conducting tube. An alternating current I(t) = I0 sin (2πvt) flows down the central thin wire and returns along the co-axial conducting tube. The induced electric field at a distance s from the wire inside the cable is E(s,t) = μ0I0v coz (2πvt). In

a) calculate the displacement current density inside the cable

c) compare the conduction current I0 with the displacement current I0d

a) The displacement current density is given as

8.31. A plane EM wave travelling in vacuum along z-direction is given by

over the rectangular loop 1234 shown in the figure

over the surface bounded by loop 1234

d) by using a similar process and the equation

c) Substituting the above equations in the following equation we get

8.32. A plane EM wave travelling along z-direction is described by

i) the average energy density of the wave is given by

ii) the time-averaged intensity of the wave is given by

i) The energy density due to electric field E is

The energy density due to magnetic field B is

The average energy density of the wave is given by:

The time-averaged intensity of the wave is given as

Check out the NCERT Exemplar Class 12 Physics Chapter 8 Electromagnetic waves, available as a PDF below:

BYJU’S provide study materials, notes, books, MCQ’S, assignments and sample papers (2018-2019) prepared by top-notch subject experts of the country who are involved in teaching CBSE syllabus for decades. Our study materials give you a thorough knowledge of the concepts involved in CBSE syllabus and guides you in comprehending with Physics formula, derivations and numerical problems.