NCERT Exemplar Solutions for Class 7 Science aids you in perceiving the important topics involved in the respiratory system in humans and a few animals and plants. After studying this exemplar you will get to know important diagrams, charts from which questions are asked regularly in Class 7 and entrance examinations.

NCERT Exemplar Solutions for Class 7 Science guide students in a proper understanding of the topics covered in the CBSE syllabus. By providing answers to questions of varying difficulty they make your fundamentals strong and will help you in studying advanced topics in your future classes. 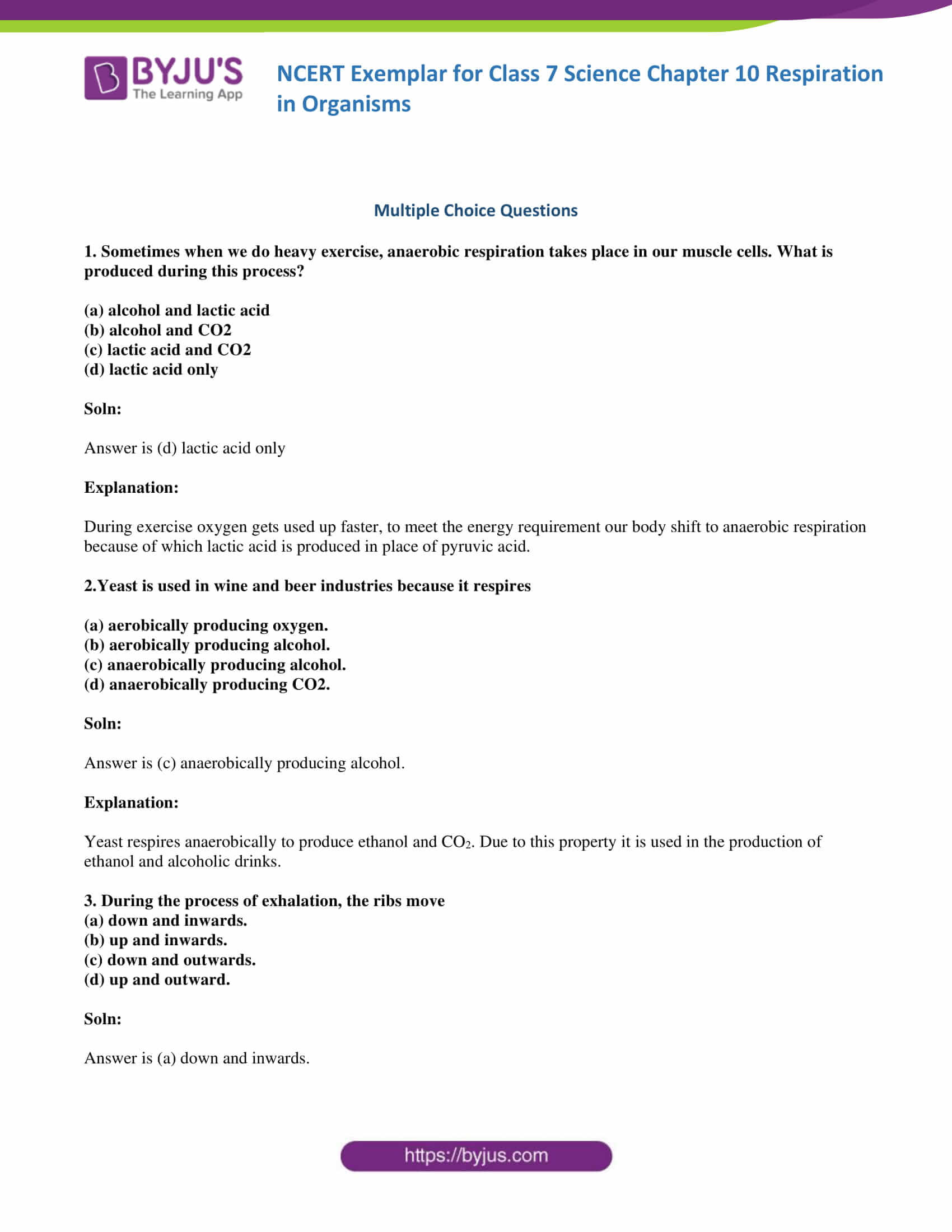 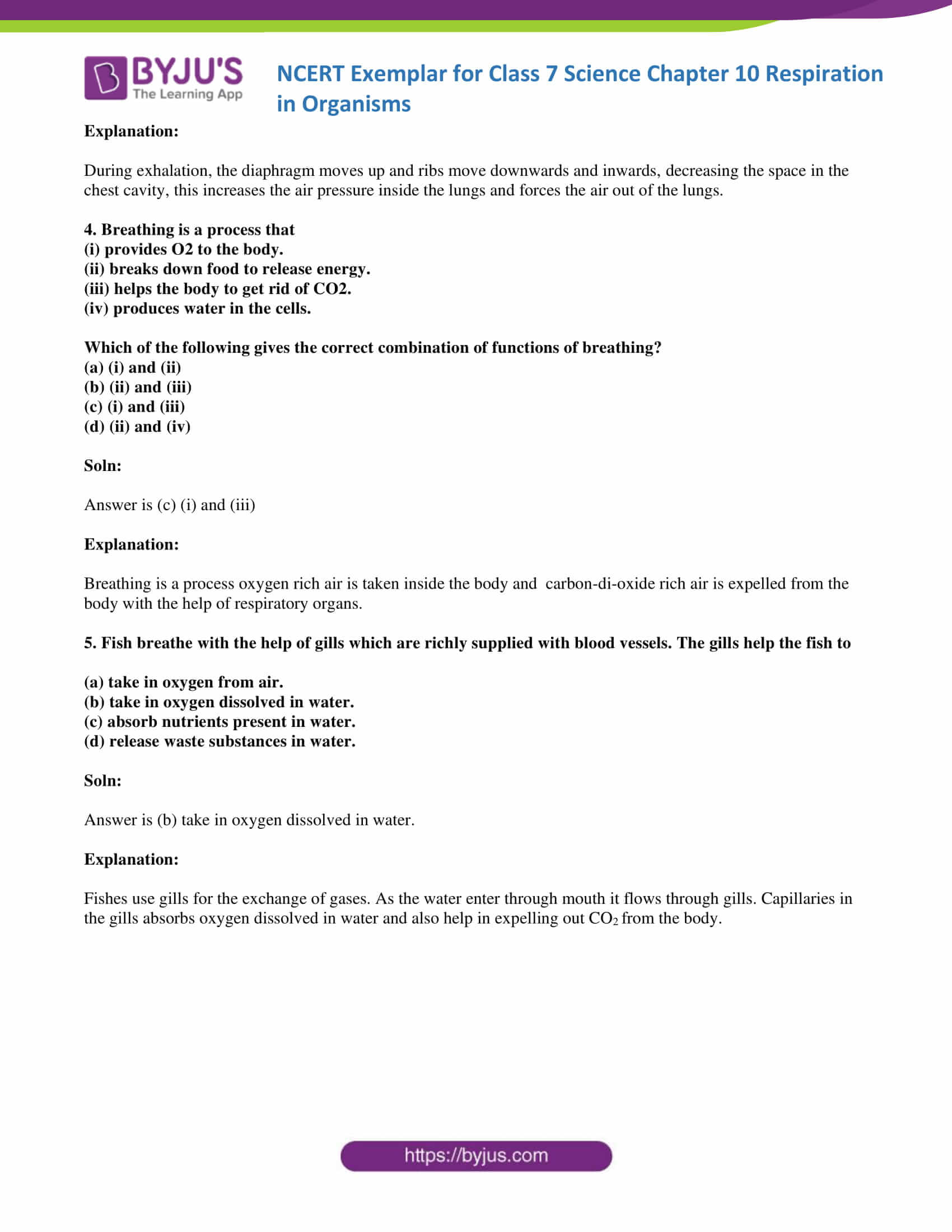 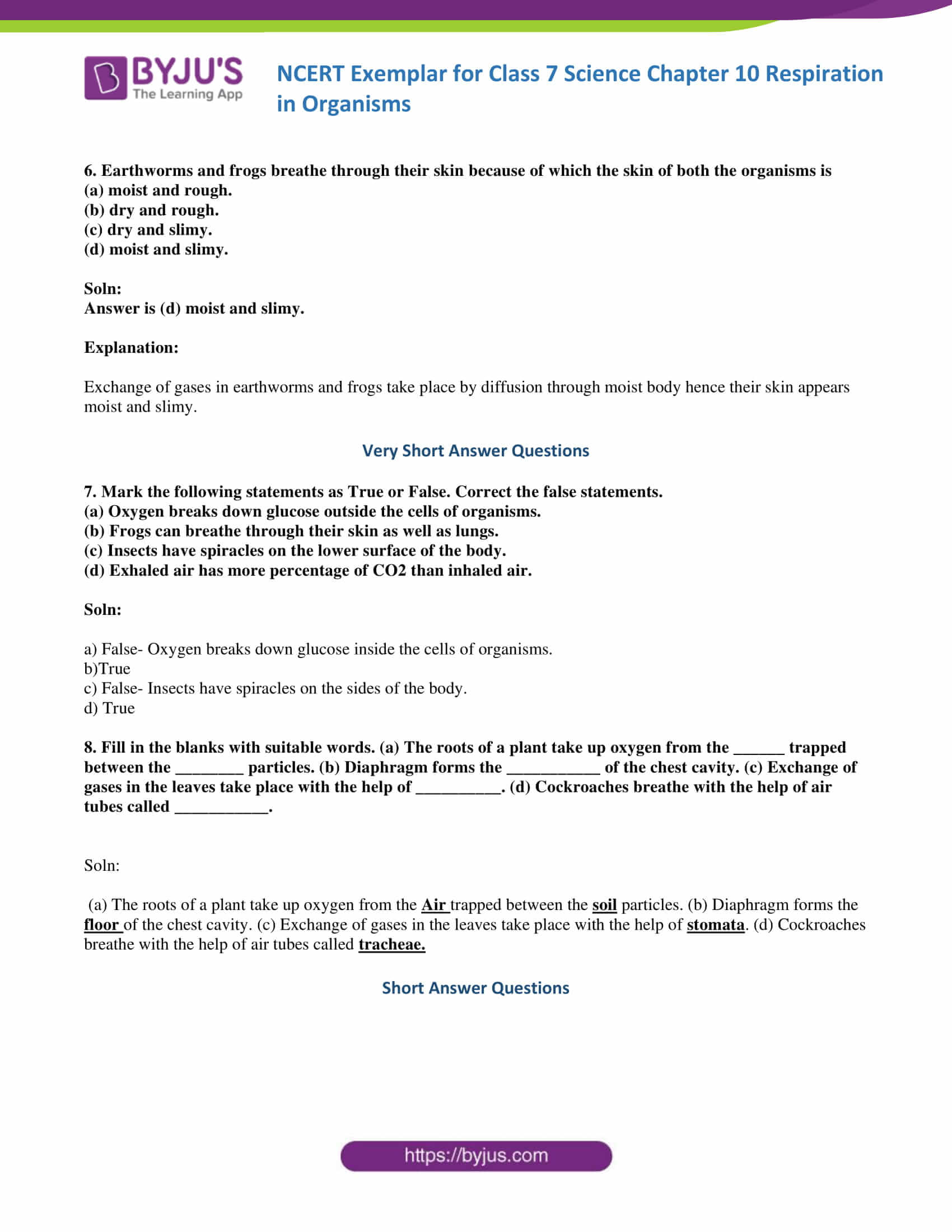 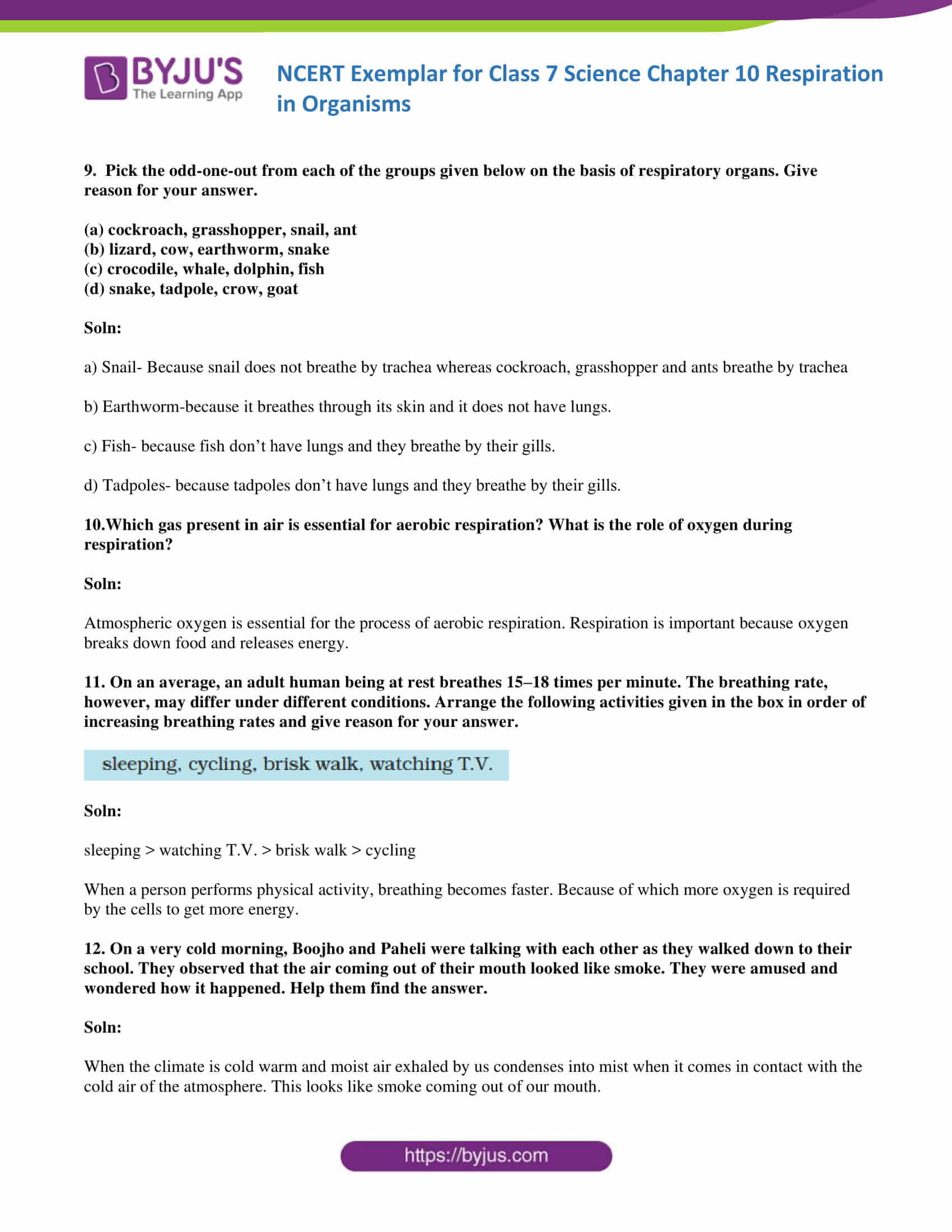 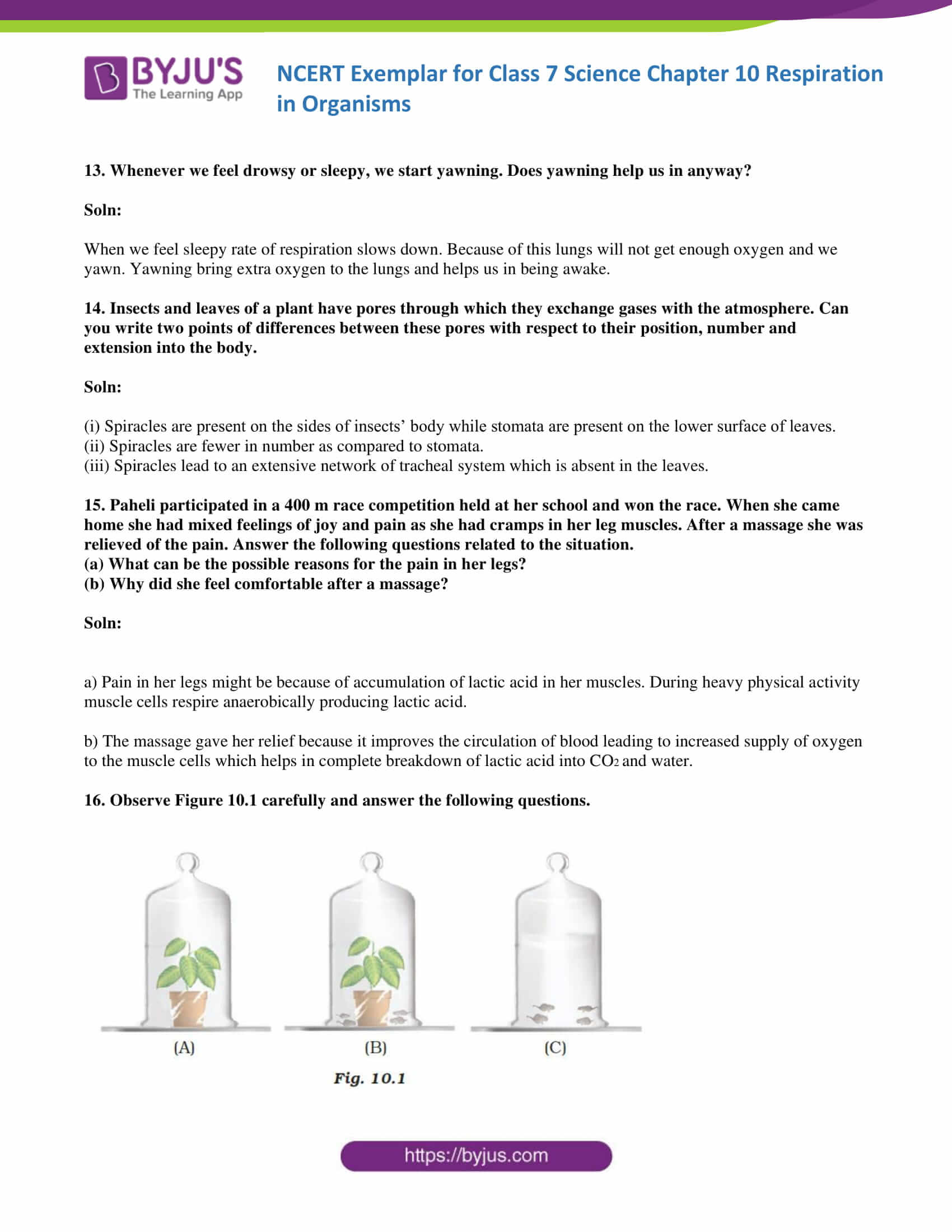 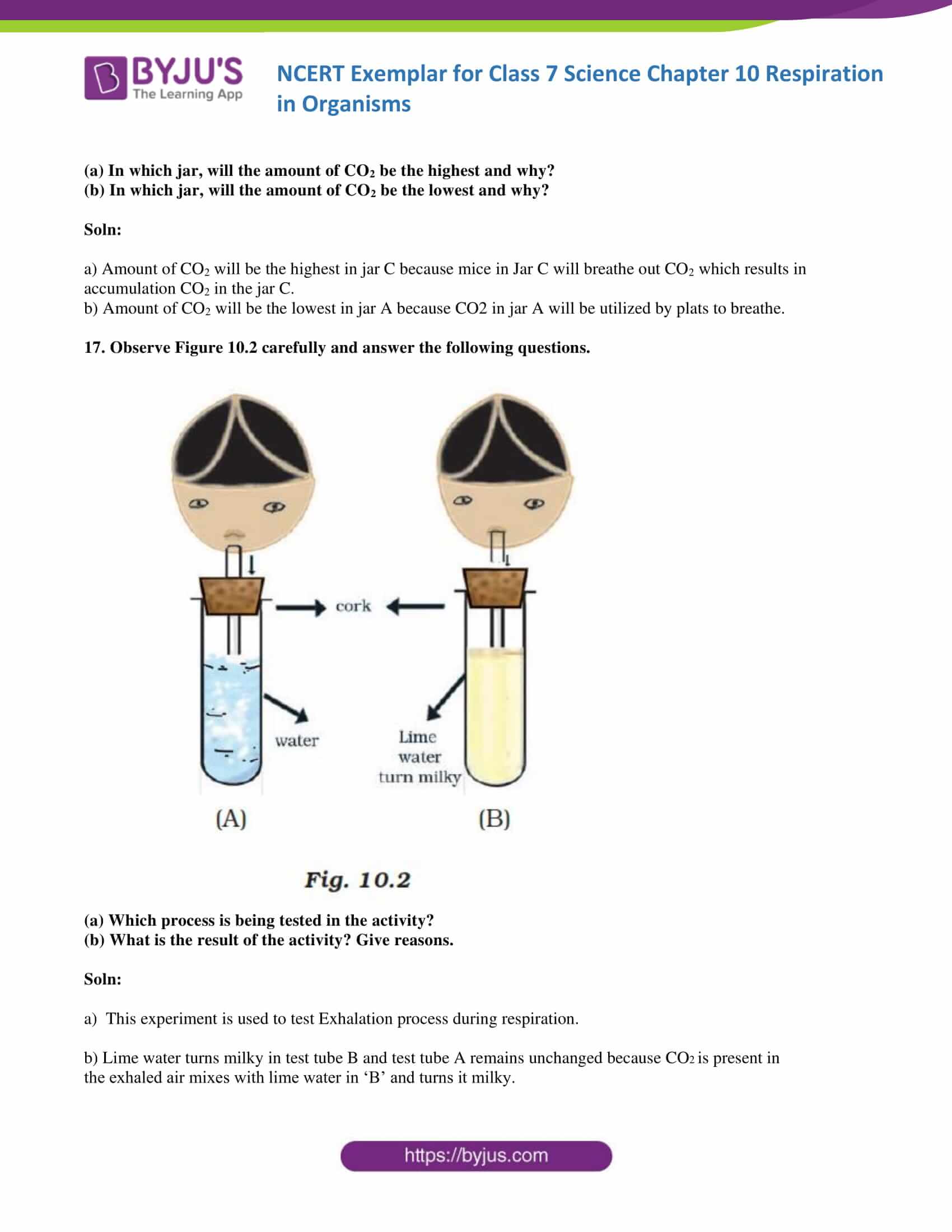 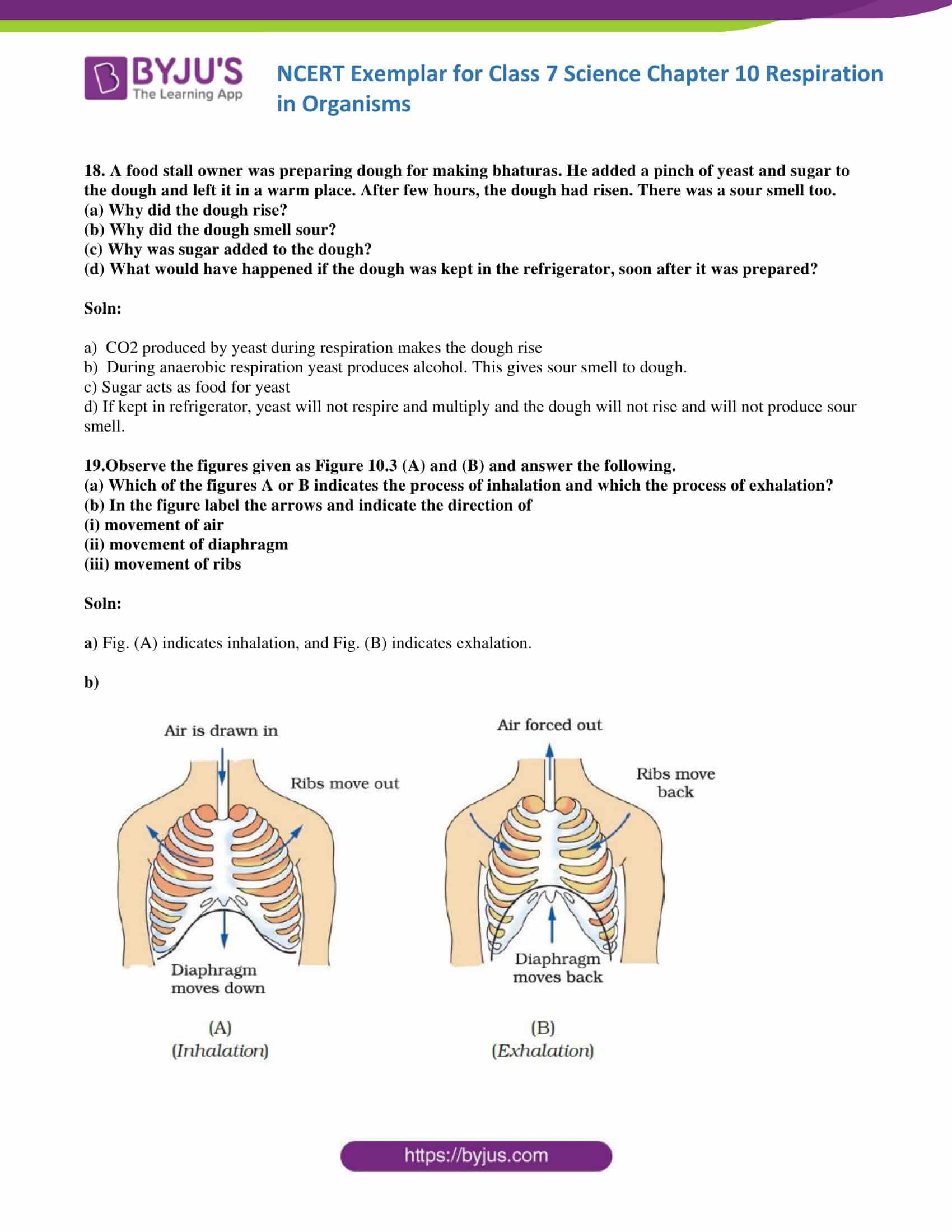 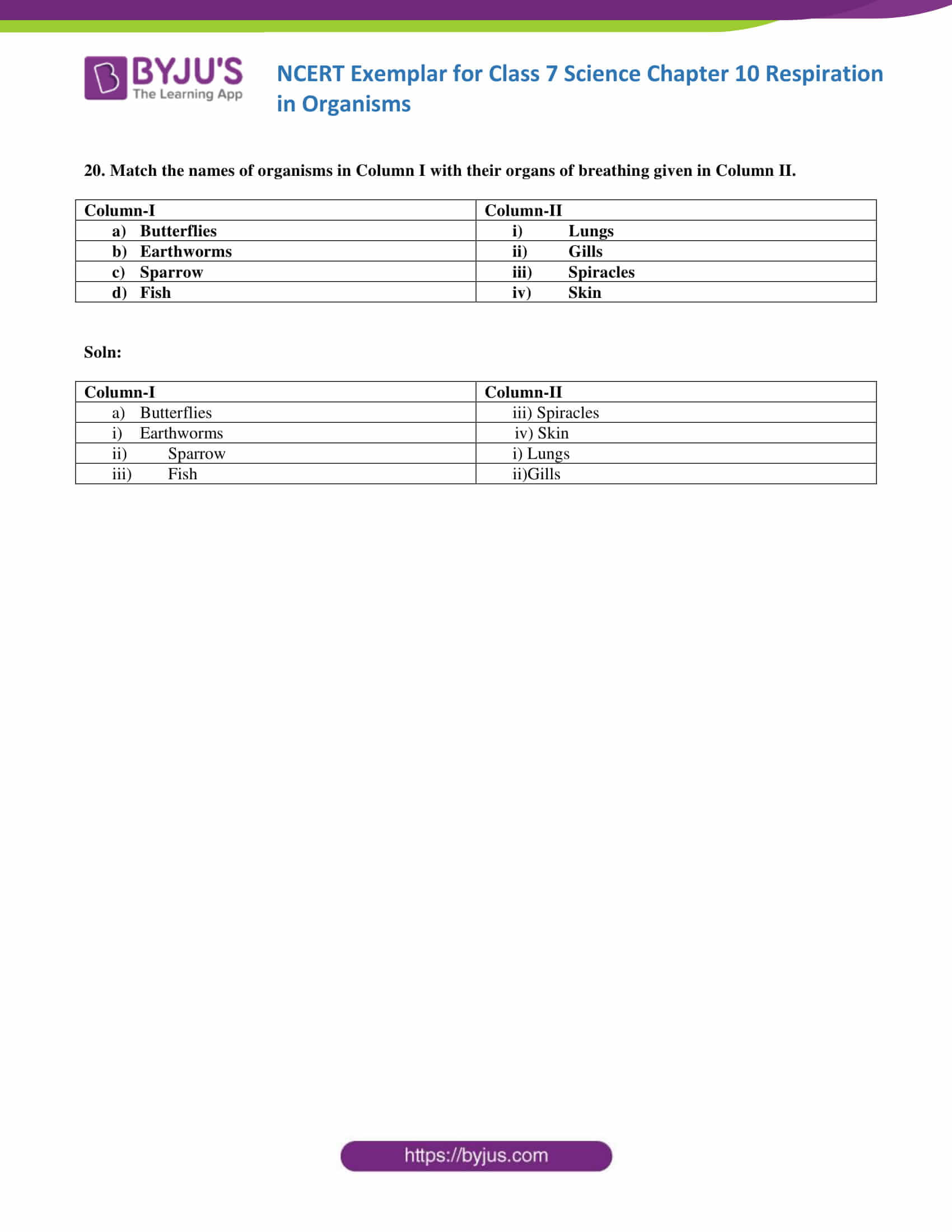 1. Sometimes when we do heavy exercise, anaerobic respiration takes place in our muscle cells. What is produced during this process?

(a) alcohol and lactic acid

The answer is (d) lactic acid only

During exercise oxygen gets used up faster, to meet the energy requirement our body shifts to anaerobic respiration because of which lactic acid is produced in place of pyruvic acid.

2. Yeast is used in the wine and beer industries because it respires

Yeast respires anaerobically to produce ethanol and CO2. Due to this property, it is used in the production of ethanol and alcoholic drinks.

3. During the process of exhalation, the ribs move

(a) down and inwards.

(c) down and outwards.

The answer is (a) down and inwards.

During exhalation, the diaphragm moves up and ribs move downwards and inwards, decreasing the space in the chest cavity, this increases the air pressure inside the lungs and forces the air out of the lungs.

4. Breathing is a process that

(iv) produces water in the cells.

Which of the following gives the correct combination of functions of breathing?

Breathing is a process oxygen-rich air is taken inside the body and carbon-di-oxide rich air is expelled from the body with the help of respiratory organs.

5. Fish breathe with the help of gills which are richly supplied with blood vessels. The gills help the fish to

(a) take in oxygen from the air.

(b) take in oxygen dissolved in water.

The answer is (b) take in oxygen dissolved in water.

Fishes use gills for the exchange of gases. As the water enters through mouth it flows through gills. Capillaries in the gills absorb oxygen dissolved in water and also help in expelling out CO2 from the body.

6. Earthworms and frogs breathe through their skin because of which the skin of both the organisms is

(a) moist and rough.

The answer is (d) moist and slimy.

Exchange of gases in earthworms and frogs take place by diffusion through moist body hence their skin appears moist and slimy.

7. Mark the following statements as True or False. Correct the false statements.

(a) Oxygen breaks down glucose outside the cells of organisms.

(b) Frogs can breathe through their skin as well as lungs.

(c) Insects have spiracles on the lower surface of the body.

a) False- Oxygen breaks down glucose inside the cells of organisms.

c) False- Insects have spiracles on the sides of the body.

(a) The roots of a plant take up oxygen from the Air trapped between the soil particles. (b) The diaphragm forms the floor of the chest cavity. (c) Exchange of gases in the leaves takes place with the help of stomata. (d) Cockroaches breathe with the help of air tubes called tracheae.

9. Pick the odd-one-out from each of the groups given below on the basis of respiratory organs. Give a reason for your answer.

a) Snail- Because snail does not breathe by trachea whereas cockroach, grasshopper and ants breathe by the trachea

b) Earthworm-because it breathes through its skin and it does not have lungs.

c) Fish- because fish don’t have lungs and they breathe by their gills.

d) Tadpoles- because tadpoles don’t have lungs and they breathe by their gills.

10. Which gas present in the air is essential for aerobic respiration? What is the role of oxygen during respiration?

Atmospheric oxygen is essential for the process of aerobic respiration. Respiration is important because oxygen

breaks down food and releases energy.

11. On average, an adult human being at rest breathes 15–18 times per minute. The breathing rate, however, may differ under different conditions. Arrange the following activities given in the box in order of increasing breathing rates and give a reason for your answer.

When a person performs a physical activity, breathing becomes faster. Because of which more oxygen is required by the cells to get more energy.

12. On a very cold morning, Boojho and Paheli were talking with each other as they walked down to their school. They observed that the air coming out of their mouth looked like smoke. They were amused and wondered how it happened. Help them find the answer.

When the climate is cold warm and moist air exhaled by us condenses into mist when it comes in contact with the cold air of the atmosphere. This looks like smoke coming out of our mouth.

13. Whenever we feel drowsy or sleepy, we start yawning. Does yawning help us in any way?

When we feel the sleepy rate of respiration slows down. Because of this lungs will not get enough oxygen and we yawn. Yawning bring extra oxygen to the lungs and helps us in being awake.

14. Insects and leaves of a plant have pores through which they exchange gases with the atmosphere. Can you write two points of differences between these pores with respect to their position, number and extension into the body?

(ii) Spiracles are fewer in number as compared to stomata.

(iii) Spiracles lead to an extensive network of a tracheal system which is absent in the leaves.

15. Paheli participated in a 400 m race competition held at her school and won the race. When she came home she had mixed feelings of joy and pain as she had cramps in her leg muscles. After a massage, she was relieved of the pain. Answer the following questions related to the situation.

(a) What can be the possible reasons for the pain in her legs?

(b) Why did she feel comfortable after a massage?

a) Pain in her legs might be because of the accumulation of lactic acid in her muscles. During heavy physical activity muscle, cells respire anaerobically producing lactic acid.

to the muscle cells which helps the incomplete breakdown of lactic acid into CO2 and water.

(a) In which jar, will the amount of CO2 be the highest and why?

(b) In which jar, will the amount of CO2 be the lowest and why?

a) Amount of CO2 will be the highest in jar C because mice in Jar C will breathe out CO2 which results in accumulation CO2 in the jar C.

b) Amount of CO2 will be the lowest in jar A because CO2 in jar A will be utilized by plants to breathe. 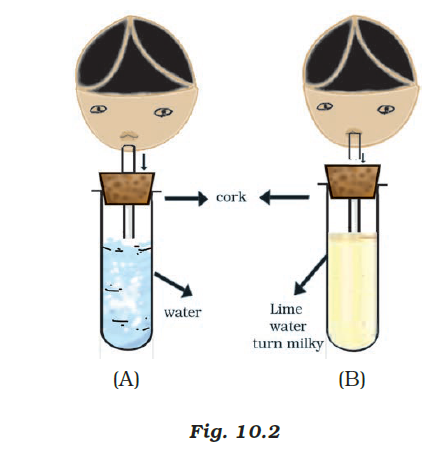 (a) Which process is being tested in the activity?

(b) What is the result of the activity? Give reasons.

a) This experiment is used to test the Exhalation process during respiration.

the exhaled air mixes with lime water in ‘B’ and turns it milky.

18. A food stall owner was preparing dough for making bhaturas. He added a pinch of yeast and sugar to the dough and left it in a warm place. After few hours, the dough had risen. There was a sour smell too.

(a) Why did the dough rise?

(b) Why did the dough smell sour?

(c) Why was sugar added to the dough?

(d) What would have happened if the dough was kept in the refrigerator, soon after it was prepared?

a) CO2 produced by yeast during respiration makes the dough rise

b) During anaerobic respiration yeast produces alcohol. This gives sour smell to the dough.

d) If kept in the refrigerator, yeast will not respire and multiply and the dough will not rise and will not produce a sour smell.

(i) movement of air 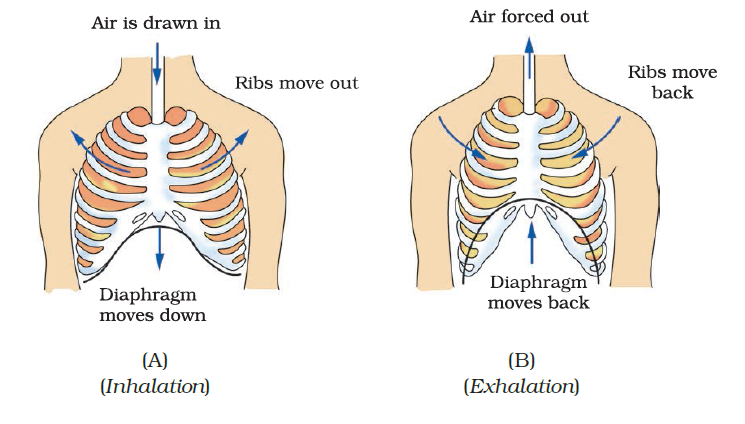 20. Match the names of organisms in Column I with their organs of breathing given in Column II.

In order to get free access to the study resources students are advised to download BYJU’S learning App for a customised learning experience.

Which gas present in the air is essential for aerobic respiration? What is the role of oxygen during respiration?

Atmospheric oxygen is essential for the process of aerobic respiration. Respiration is important because oxygen
breaks down food and releases energy.

Whenever we feel drowsy or sleepy, we start yawning. Does yawning help us in any way?

When we feel a sleepy rate of respiration slows down. Because of this lungs will not get enough oxygen and we yawn. Yawning bring extra oxygen to the lungs and helps us in being awake.