NCERT Solutions are contemplated as an exceptionally helpful book while preparing for the CBSE Class 11 Business studies examinations. This study resource possesses an intense knowledge and the Solutions collated by the subject matter experts are no different. This chapter is a brief introduction to the concept of NCERT Solution For Class 11 Business Studies Chapter 7 – Formation Of A Company. 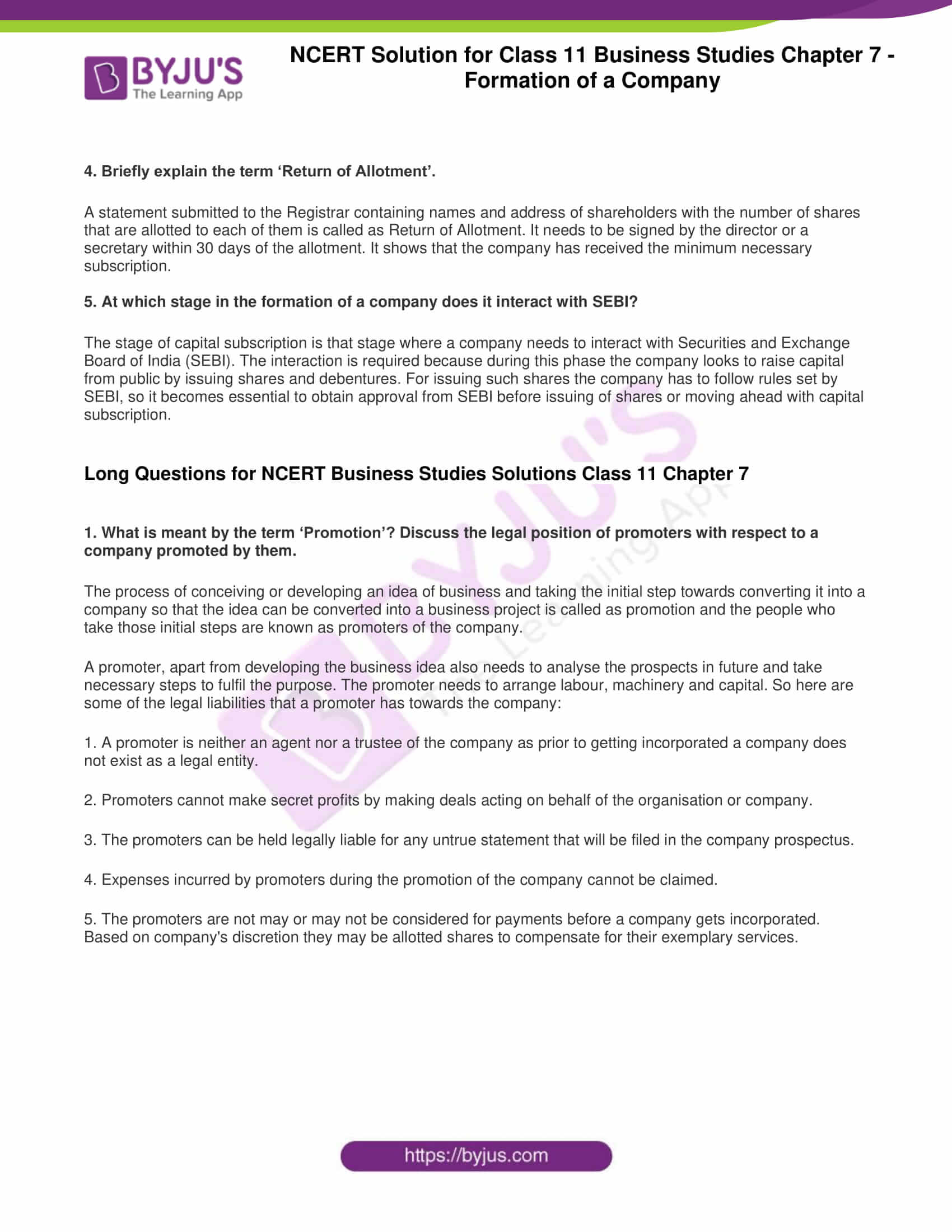 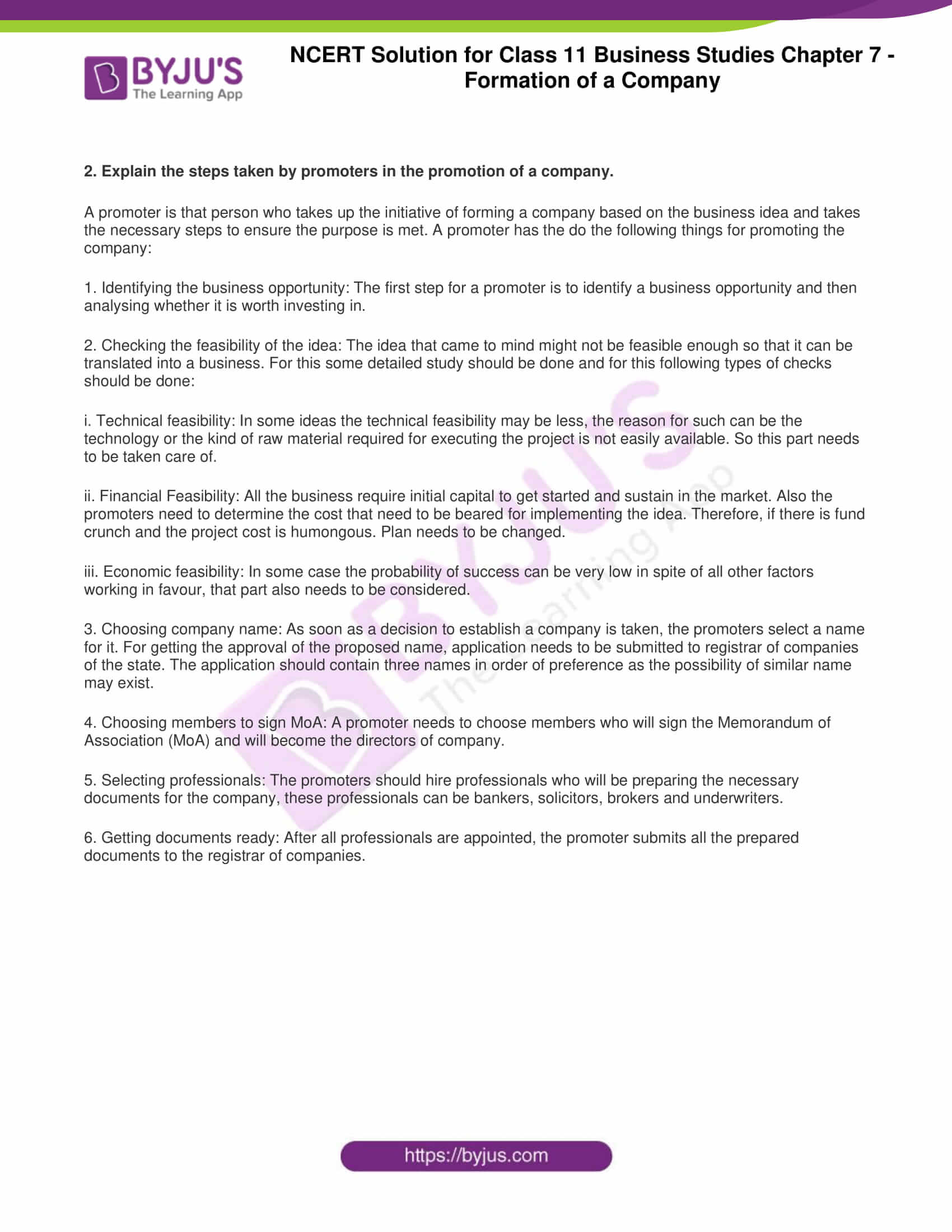 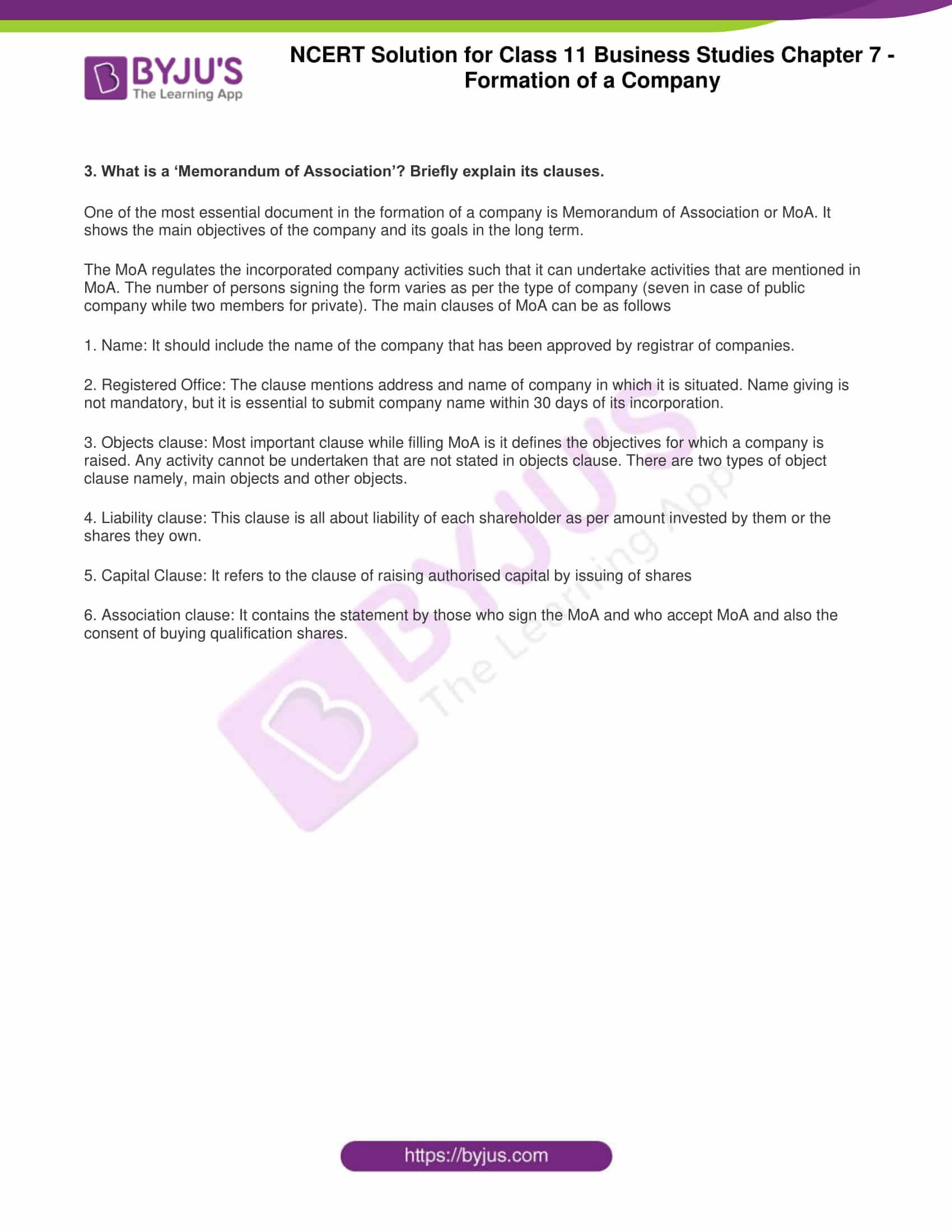 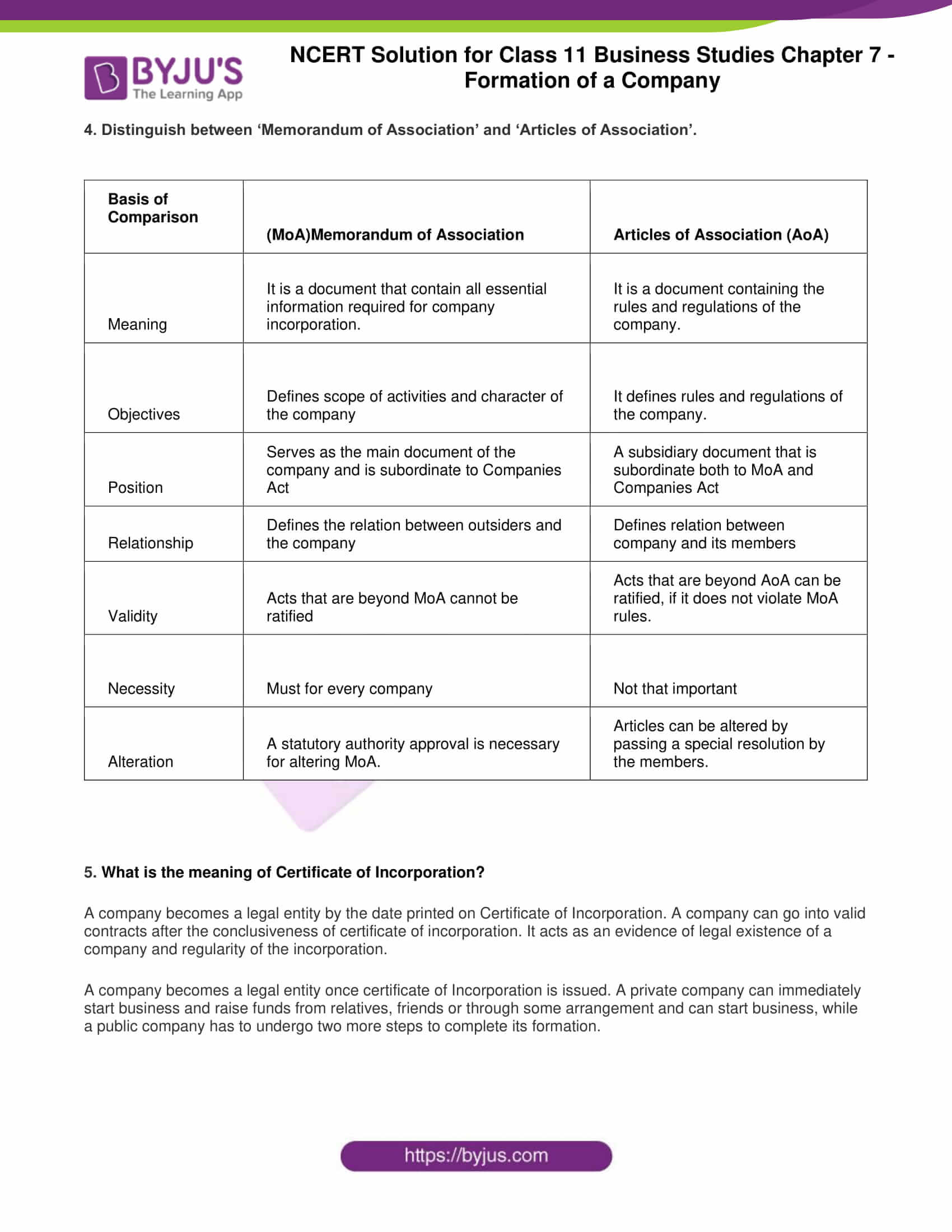 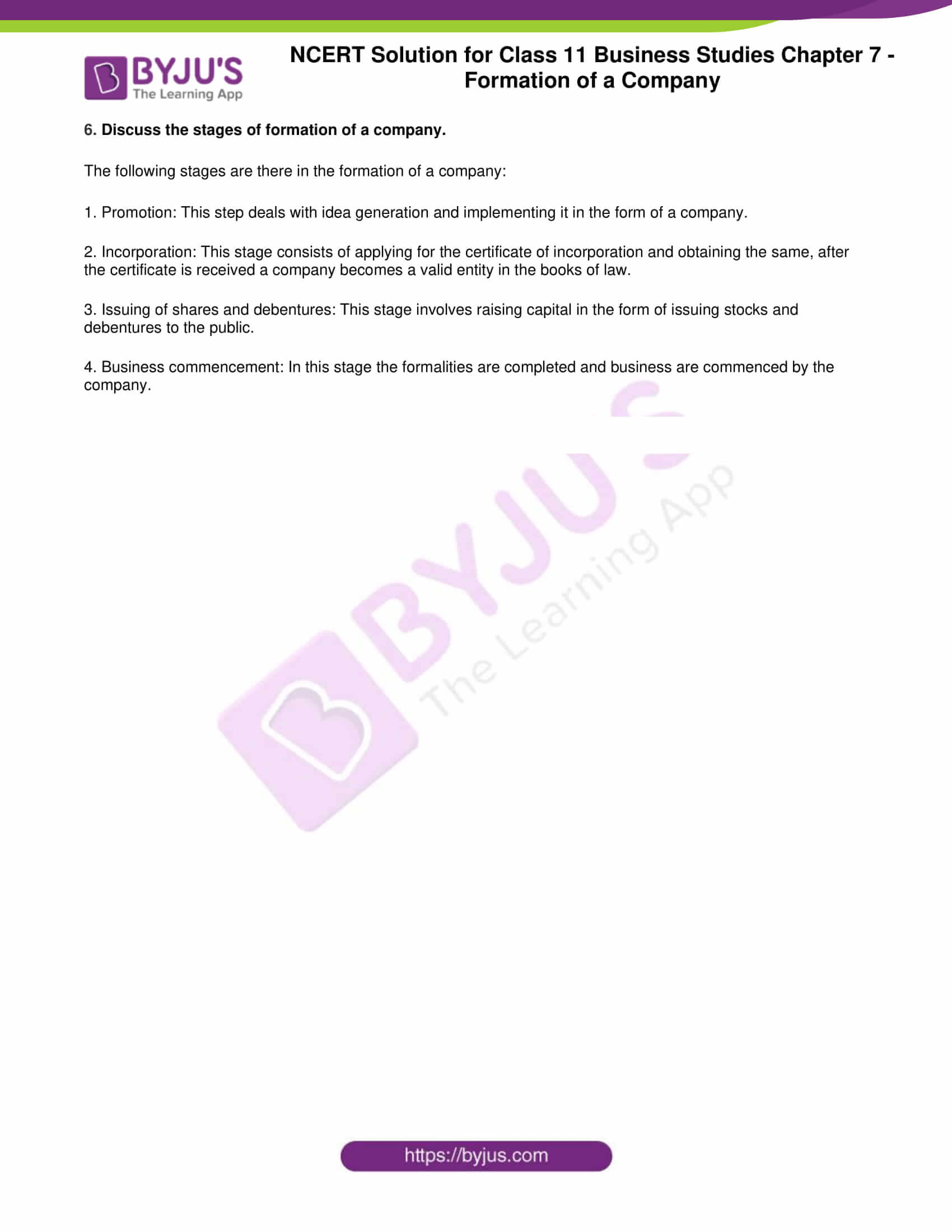 1. Name the stages in the formation of a company.

Following stages are there:

1. Promotion: This step deals with idea generation and implementing it as a company.

4. Business commencement: In this stage the formalities are completed and company commences business.

2. List the documents required for the incorporation of a company.

Following documents are required to be submitted:

1. MoA or Memorandum of Association

2. AoA or Article of Association

3. Director’s approval confirming that they will be functioning as director and buy qualification shares.

4. An agreement, with the managing director or someone who is going to be given the post of director.

5. A letter from registrar containing approving the name of the company.

6. A statutory declaration stating that all legal registration requirements have been complied

7. A notice stating the exact address of office (it can also be submitted within 30 days of being incorporated)

8. Payment evidence of registration fees in the form of a document.

A statement submitted to the Registrar containing names and address of shareholders with the number of shares that are allotted to each of them is called as Return of Allotment. It needs to be signed by the director or a secretary within 30 days of the allotment. It shows that the company has received the minimum necessary subscription.

5. At which stage in the formation of a company does it interact with SEBI?

The stage of capital subscription is that stage where a company needs to interact with Securities and Exchange Board of India (SEBI). The interaction is required because during this phase the company looks to raise capital from public by issuing shares and debentures. For issuing such shares the company has to follow rules set by SEBI, so it becomes essential to obtain approval from SEBI before issuing of shares or moving ahead with capital subscription.

1. What is meant by the term ‘Promotion’? Discuss the legal position of promoters with respect to a company promoted by them.

The process of conceiving or developing an idea of business and taking the initial step towards converting it into a company so that the idea can be converted into a business project is called as promotion and the people who take those initial steps are known as promoters of the company.

A promoter, apart from developing the business idea also needs to analyse the prospects in future and take necessary steps to fulfil the purpose. The promoter needs to arrange labour, machinery and capital. So here are some of the legal liabilities that a promoter has towards the company:

1. A promoter is neither an agent nor a trustee of the company as prior to getting incorporated a company does not exist as a legal entity.

2. Promoters cannot make secret profits by making deals acting on behalf of the organisation or company.

3. The promoters can be held legally liable for any untrue statement that will be filed in the company prospectus.

4. Expenses incurred by promoters during the promotion of the company cannot be claimed.

5. The promoters are not may or may not be considered for payments before a company gets incorporated. Based on company’s discretion they may be allotted shares to compensate for their exemplary services.

2. Explain the steps taken by promoters in the promotion of a company.

A promoter is that person who takes up the initiative of forming a company based on the business idea and takes the necessary steps to ensure the purpose is met. A promoter has the do the following things for promoting the company:

2. Checking the feasibility of the idea: The idea that came to mind might not be feasible enough so that it can be translated into a business. For this some detailed study should be done and for this following types of checks should be done:

ii. Financial Feasibility: All the business require initial capital to get started and sustain in the market. Also the promoters need to determine the cost that need to be beared for implementing the idea. Therefore, if there is fund crunch and the project cost is humongous. Plan needs to be changed.

iii. Economic feasibility: In some case the probability of success can be very low in spite of all other factors working in favour, that part also needs to be considered.

3. Choosing company name: As soon as a decision to establish a company is taken, the promoters select a name for it. For getting the approval of the proposed name, application needs to be submitted to registrar of companies of the state. The application should contain three names in order of preference as the possibility of similar name may exist.

4. Choosing members to sign MoA: A promoter needs to choose members who will sign the Memorandum of Association (MoA) and will become the directors of company.

5. Selecting professionals: The promoters should hire professionals who will be preparing the necessary documents for the company, these professionals can be bankers, solicitors, brokers and underwriters.

6. Getting documents ready: After all professionals are appointed, the promoter submits all the prepared documents to the registrar of companies.

3. What is a ‘Memorandum of Association’? Briefly explain its clauses.

One of the most essential document in the formation of a company is Memorandum of Association or MoA. It shows the main objectives of the company and its goals in the long term.

The MoA regulates the incorporated company activities such that it can undertake activities that are mentioned in MoA. The number of persons signing the form varies as per the type of company (seven in case of public company while two members for private). The main clauses of MoA can be as follows

1. Name: It should include the name of the company that has been approved by registrar of companies.

2. Registered Office: The clause mentions address and name of company in which it is situated. Name giving is not mandatory, but it is essential to submit company name within 30 days of its incorporation.

3. Objects clause: Most important clause while filling MoA is it defines the objectives for which a company is raised. Any activity cannot be undertaken that are not stated in objects clause. There are two types of object clause namely, main objects and other objects.

4. Liability clause: This clause is all about liability of each shareholder as per amount invested by them or the shares they own.

5. Capital Clause: It refers to the clause of raising authorised capital by issuing of shares

6. Association clause: It contains the statement by those who sign the MoA and who accept MoA and also the consent of buying qualification shares.

5. What is the meaning of Certificate of Incorporation?

A company becomes a legal entity once certificate of Incorporation is issued. A private company can immediately start business and raise funds from relatives, friends or through some arrangement and can start business, while a public company has to undergo two more steps to complete its formation.

6. Discuss the stages of formation of a company.

The following stages are there in the formation of a company:

1. Promotion: This step deals with idea generation and implementing it in the form of a company.

4. Business commencement: In this stage the formalities are completed and business are commenced by the company.