NCERT Solutions are contemplated as an exceptionally helpful book while preparing for the CBSE Class 11 Economics examinations. This study resource possesses an intense knowledge and the Solutions collated by the subject matter experts are no different. This chapter is a brief introduction to the concept Infrastructure 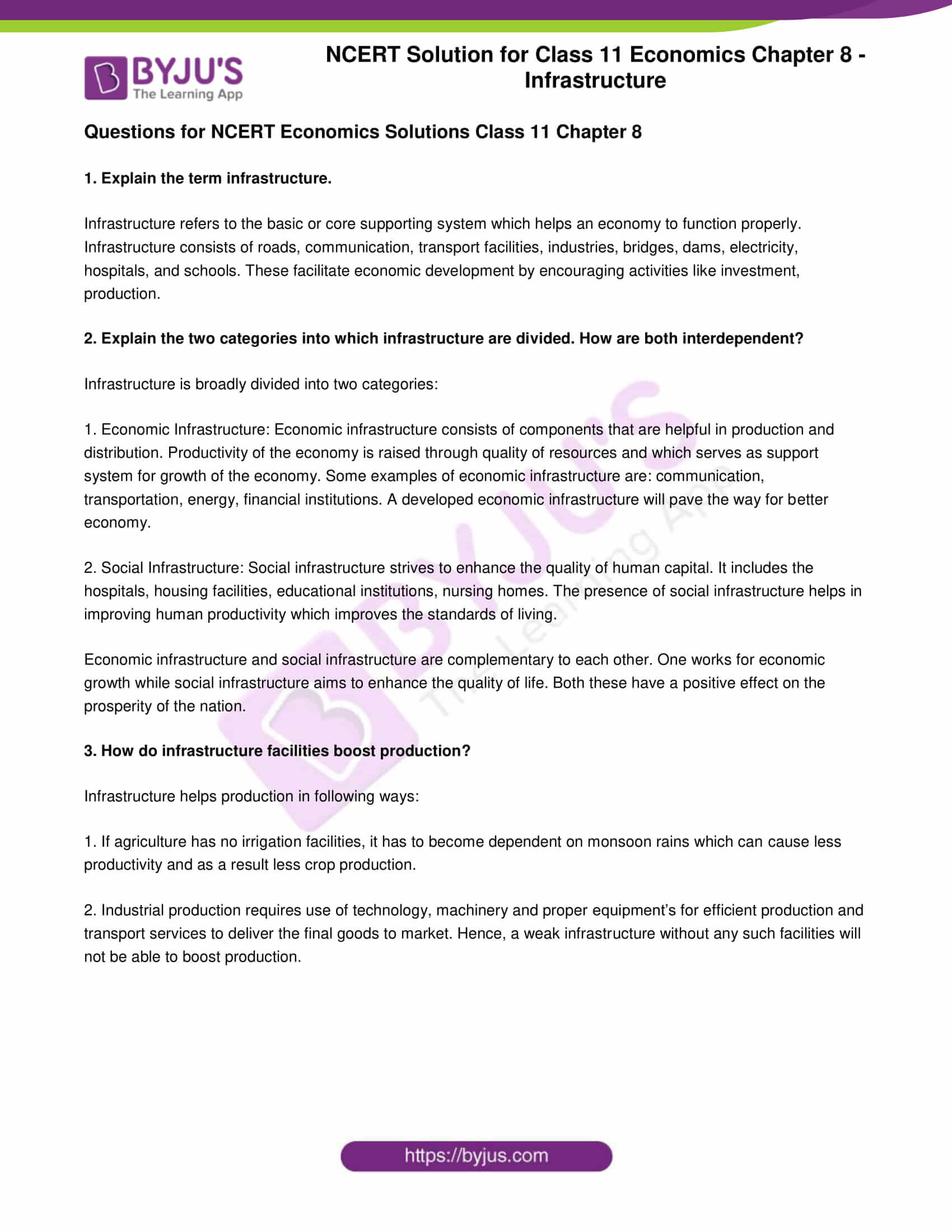 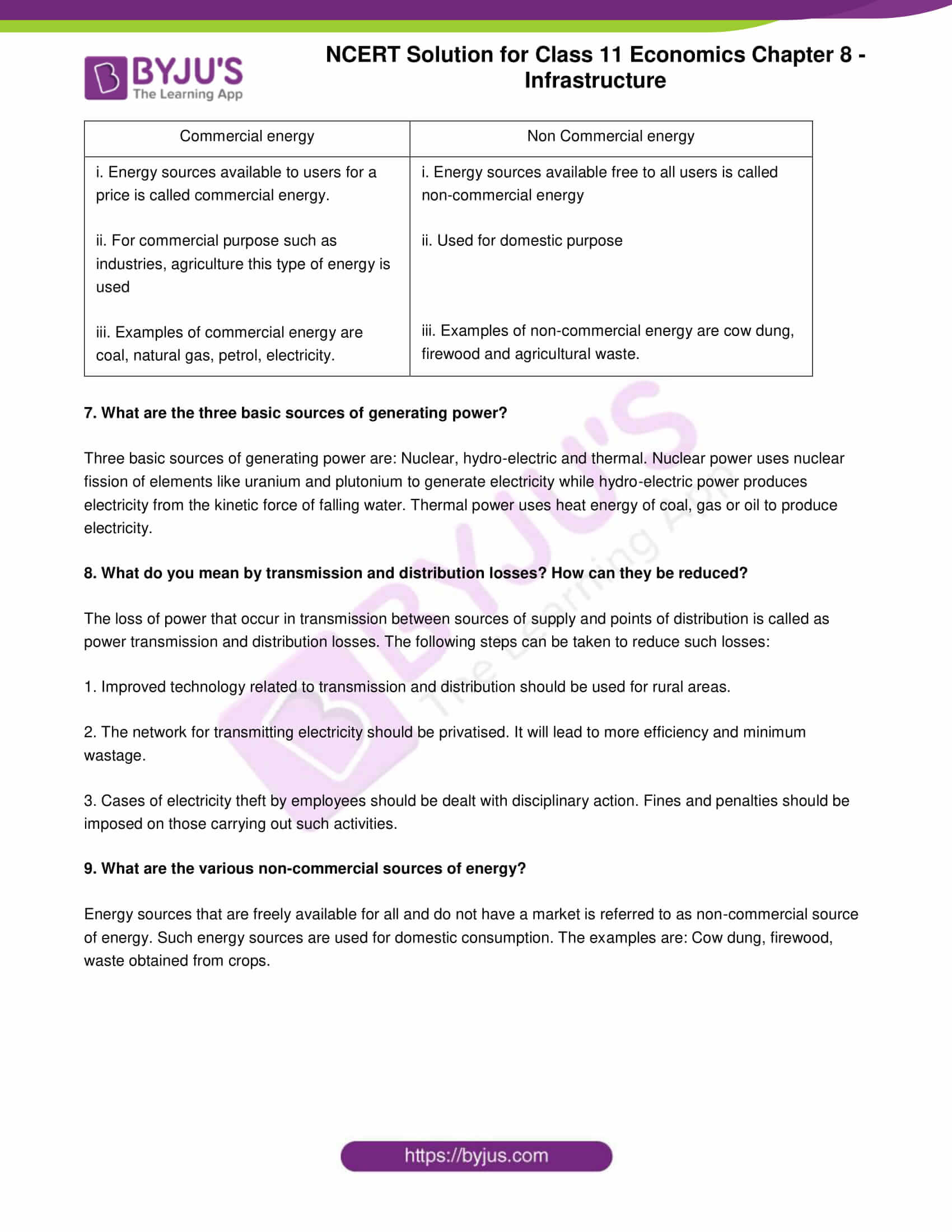 2. Explain the two categories into which infrastructure are divided. How are both interdependent?

3. How do infrastructure facilities boost production?

1. If agriculture has no irrigation facilities, it has to become dependent on monsoon rains which can cause less productivity and as a result less crop production.

2. Industrial production requires use of technology, machinery and proper equipment’s for efficient production and transport services to deliver the final goods to market. Hence, a weak infrastructure without any such facilities will not be able to boost production.

4. Infrastructure contributes to the economic development of a country. Do you agree? Explain.

Definitely, infrastructure helps in economic development of a country. It can be understood better in the following points:

1. Infrastructure both in the form of economic and social, assist in increasing the productivity which leads to higher production. It ensures smooth movement of goods and raw materials which reduces inefficiencies and leads to effective resource management.

2. Having an appropriate infrastructure helps in providing an environment which is more likely to bag investment from potential investors. Lack of infrastructure does not encourage investment.

3. Infrastructure helps in economic development by offering linkages. These can be forward or backward. Linkages help provide scope for expansion of one industry due to growth or expansion in a related industry

4. Infrastructure helps in enhancing market size. The way raw materials that can be transported in a fast and cost-effective manner will help a producer to offer goods in different markets across country or borders.

5. What is the state of rural infrastructure in India?

Infrastructure in rural India is not as developed as in urban areas. Women in rural areas are still making use of wood and cow dung to fulfil the energy needs. As per Census 2001, 56% households were having access to electricity, while the remaining were using alternative sources like kerosene etc. In rural households around 90% of the fuel used for cooking is biofuel. There is lack of clean water and sanitation is very less. Infrastructure being an important indicator of growth, it is essential to address this concern. India has invested very meagre 5% of its GDP towards infrastructure most of which should be towards rural infrastructure, which will promote economic development of the rural areas as well as the country as a whole.

6. What is the significance of energy? Differentiate between commercial and non-commercial sources of energy.

Energy plays a significant role in development process for a country. All the major industries, agriculture, transportation etc. all are dependent on energy for its functioning. Energy is the lifeline of industries and also for domestic use. It is used for cooking, lighting. So it has a very significant role in our life.

7. What are the three basic sources of generating power?

8. What do you mean by transmission and distribution losses? How can they be reduced?

The loss of power that occur in transmission between sources of supply and points of distribution is called as power transmission and distribution losses. The following steps can be taken to reduce such losses:

1. Improved technology related to transmission and distribution should be used for rural areas.

2. The network for transmitting electricity should be privatised. It will lead to more efficiency and minimum wastage.

3. Cases of electricity theft by employees should be dealt with disciplinary action. Fines and penalties should be imposed on those carrying out such activities.

9. What are the various non-commercial sources of energy?

Energy sources that are freely available for all and do not have a market is referred to as non-commercial source of energy. Such energy sources are used for domestic consumption. The examples are: Cow dung, firewood, waste obtained from crops.

10. Justify that energy crisis can be overcome with the use of renewable sources of energy.

Renewable sources of energy are those sources which can be replenished or renewed. These sources are available in nature and examples are sunlight, wind energy etc. The non-renewable sources cannot renew themselves readily and will exhaust once their quota is finished and hence cannot be an answer to the energy crisis that is being experienced. In such a situation the natural sources which can be found in abundance should be utilised.

11. How has the consumption pattern of energy changed over the years?

The following points will show the changing consumption of power in India:

1. For converting the consumption of different fuels into a common unit, the term MTOE is used which stands for Million Tonnes of Oil Equivalent.

2. Coal, petroleum and gas are the leading fuels that are in use in India. Coal is used in 55% of energy requirements, followed by oil and natural gas at 31 and 11 percent. The use of hyrdro electric energy accounts for 3%.

3. Over dependency on petroleum products has resulted in majority of oil being imported from the Gulf countries.

4. Atomic energy constitutes around 2% of the total energy consumption

5. Agriculture is using more electricity than it was using earlier and industrial sector still have the highest spending of electricity among all sectors.

12. How are the rates of consumption of energy and economic growth connected?

Energy consumption is crucial for economic growth. Consuming renewable sources of energy leads to sustainable development of the economy. The agriculture and other industries use electricity for driving production and transportation of produced goods and services. A country having a good amount of energy consumption in industrial and other related sectors such as agriculture, clothing etc. will indicate good economic growth of a country. Using of renewable sources of energy also leads to sustainable economic development.

13. What problems are being faced by the power sector in India?

The following are the problems faced by power sector in India:

1. Considering an annual growth of 7% for economic growth, the available capacity of the power stations is not sufficient to meet requirements.

2. There has been a loss of about 500 billion for the state run electricity boards.

4. High tariffs and frequent power cuts are some of the most important problems currently.

5. The electricity boards are unable to cover up transmission and distribution losses

6. Scarcity of raw materials for the thermal power plants is a hindrance in producing electricity.

14. Discuss the reforms which have been initiated recently to meet the energy crisis in India.

2. Indian government had allowed joint venture of Tata Power and Power Grid Corporation for the construction of transmission networks

3. The mission of POWER for ALL by 2012 was one such initiative where the government planned to achieve a target of 1000 KwHr per capita consumption. The aim was to improve quality of power and viability of power companies commercially.

5. Accelerated Power Development and Reform Programme (APDRP) was introduced in the year 2000 with the aim of improving financial viability, bring a reduction in T& D losses and introducing computers for checking functions.

6. Encouraging the population to use renewable sources and reduce dependence on conventional sources. National programs like National Energy Efficiency Programme (NEEP) were established that aimed at conserving petroleum products.

15. What are the main characteristics of health of the people of our country?

The following points show the state of health of people of our country:

1. Death rate witnessed a decline to 8 per thousand

4. Many of the deadly diseases were under control like smallpox, cholera, polio, leprosy etc. 16. What is a global burden of disease?

Global Burden of Disease or GBD is a comprehensive global and regional research program that assesses the number of people that are going to die prematurely due to a particular disease. It also includes the number of years spent on disability due to various diseases. India has a share of 20% of the overall GBD and the majority of the diseases are malaria, tuberculosis and diarrhoea

17. Discuss the main drawbacks of our health care system.

Drawbacks of Healthcare System are:

1. Health care services are not equally distributed in rural and urban areas. More population is on rural areas but has one-fifth of the hospitals and doctor population ratio is 1:2000. Half of the dispensaries are in villages. Health care facilities have been confined to urban areas mostly.

2. Diseases such as AIDS, SARS have been detected in India which poses threat to human capital and is detrimental to economic growth.

3. There is a lack of trained and skilled healthcare personnel in rural areas, as a result of which patients have to visit urban health centres. Lack of proper roads and poor transportation makes matter worse.

18. How has women’s health become a matter of great concern?

Women’s health has become a concern as such:

1. There is a decline in woman’s population as per child sex ratio which has become 927 females in comparison to 1000 males.

2. It has been seen that around 50% of female population in the age group of 15-49 are anaemic due to iron deficiency, which leads to deaths during childbirth accounting for 19% of women deaths.

3. Abortions are one of the main causes of female deaths.

19. Describe the meaning of public health. Discuss the major public health measures undertaken by the state in recent years to control diseases.

The act of protecting health of public through research, education and promotion of healthy lifestyle is referred to as public health. It aims to improve health and wellbeing of the people around the world by addressing health concerns of an entire population. Following are the public health measures taken by government:

4. Introduction of various facilities and better vaccination has resulted in eradication of polio, pox, leprosy and other such diseases.

Following are the six systems of Indian medicine:

Ayurveda: A traditional form of medicine that is in practice in India. Ayurveda recommends diet and lifestyle changes coupled with drug therapy as source of recovery.

Yoga: An art form that has significantly gained popularity in recent years. It originated in India. Maharshi Patanjali was instrumental in writing a book which is still serving as the handbook of yoga. It is practiced for healthy body, mind and spirit.

Unani: Unani is similar to Ayurveda and was introduced in 10th century AD. It establishes disease as a natural process and the symptoms being the reactions to those symptoms.

Siddha: Siddha form of medicine is practiced in India and originated in Tamil Nadu. It is one of the oldest systems of treatment. It is a unique form of treatment.

Homeopathy: Homeopathy means similar treatment. In this form of treatment drug and the disease both produce similar symptoms which ultimately cancel each other. It is preferred by many due to its healing properties.

Naturopathy: Naturopathy believes in the healing power of nature and considers fasting as a way to recover. Proper rest coupled with fasting helps a body recover.

21. How can we increase the effectiveness of health care programmes?

Effectiveness of health care programmes can be increased by the following steps:

1. Power should be delegated from central to local authorities.

2. Use of mediums such as TV, internet, radio and newspaper can help spread more awareness among people

3. Providing quality medical facilities at nominal costs is a good way to be more effective

5. Increasing the number of medical colleges and health care centres in the country.