NCERT Solutions are contemplated as an exceptionally helpful book while preparing for the CBSE Class 11 Economics examinations. This study resource possesses an intense knowledge and the Solutions collated by the subject matter experts are no different. This chapter is a brief introduction to the concept of Environment And Sustainable Development. 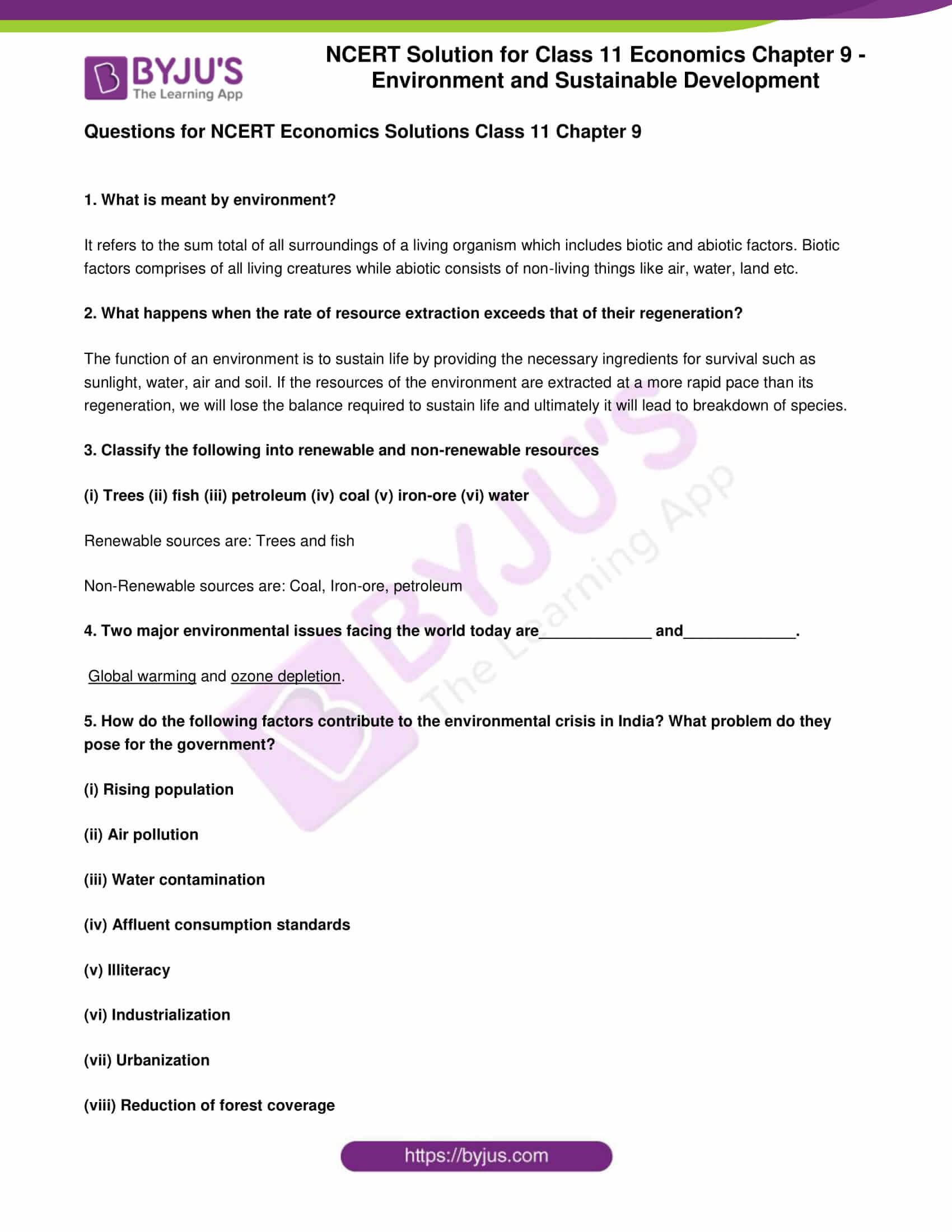 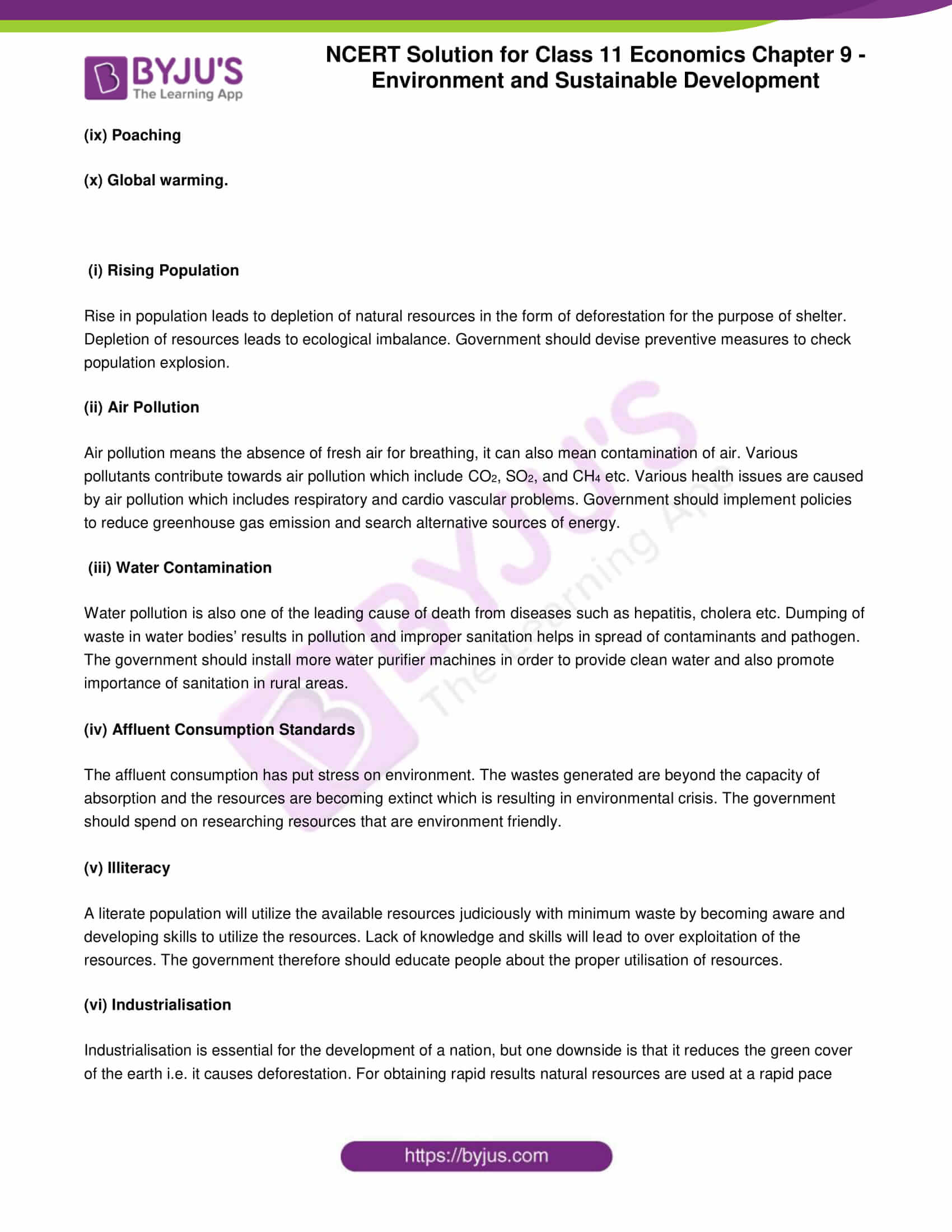 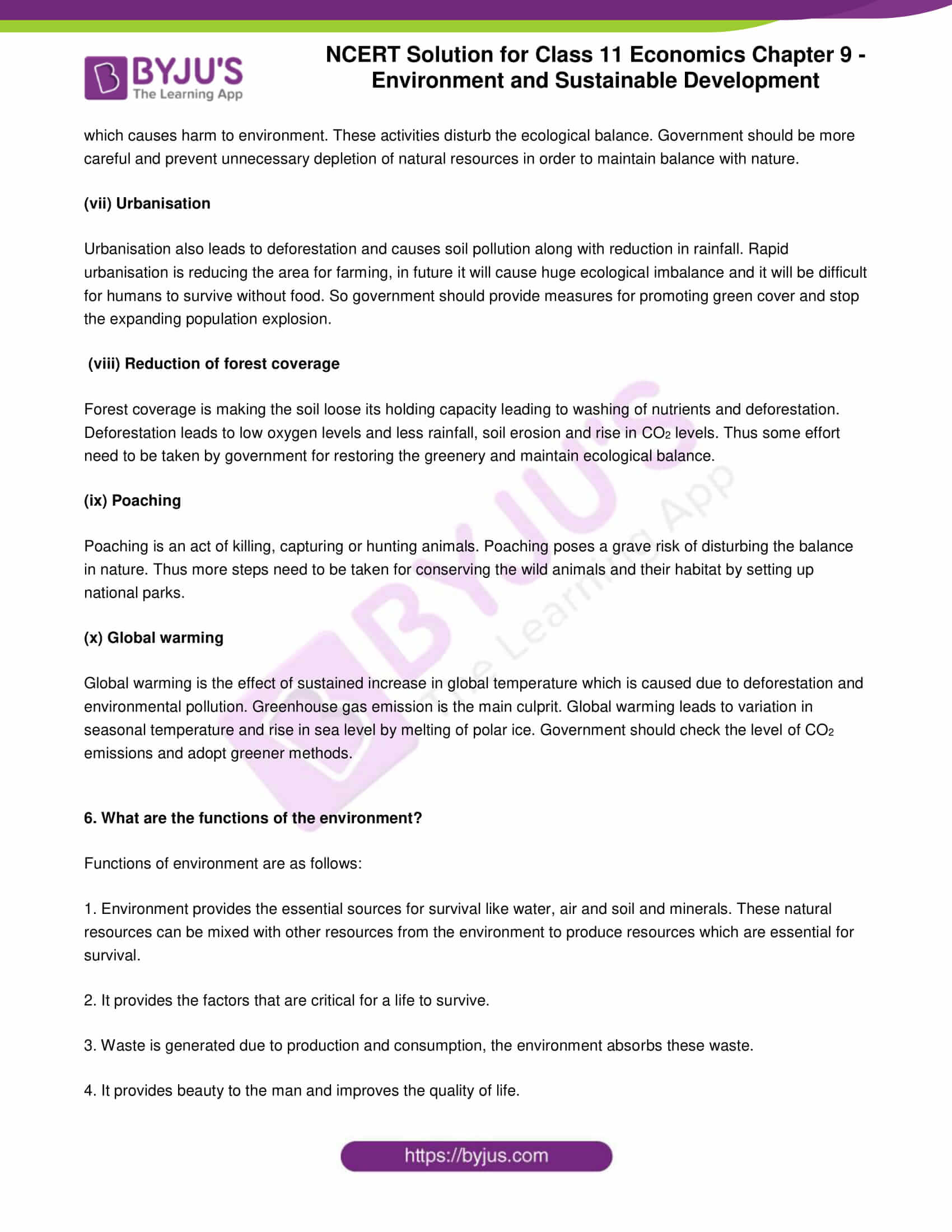 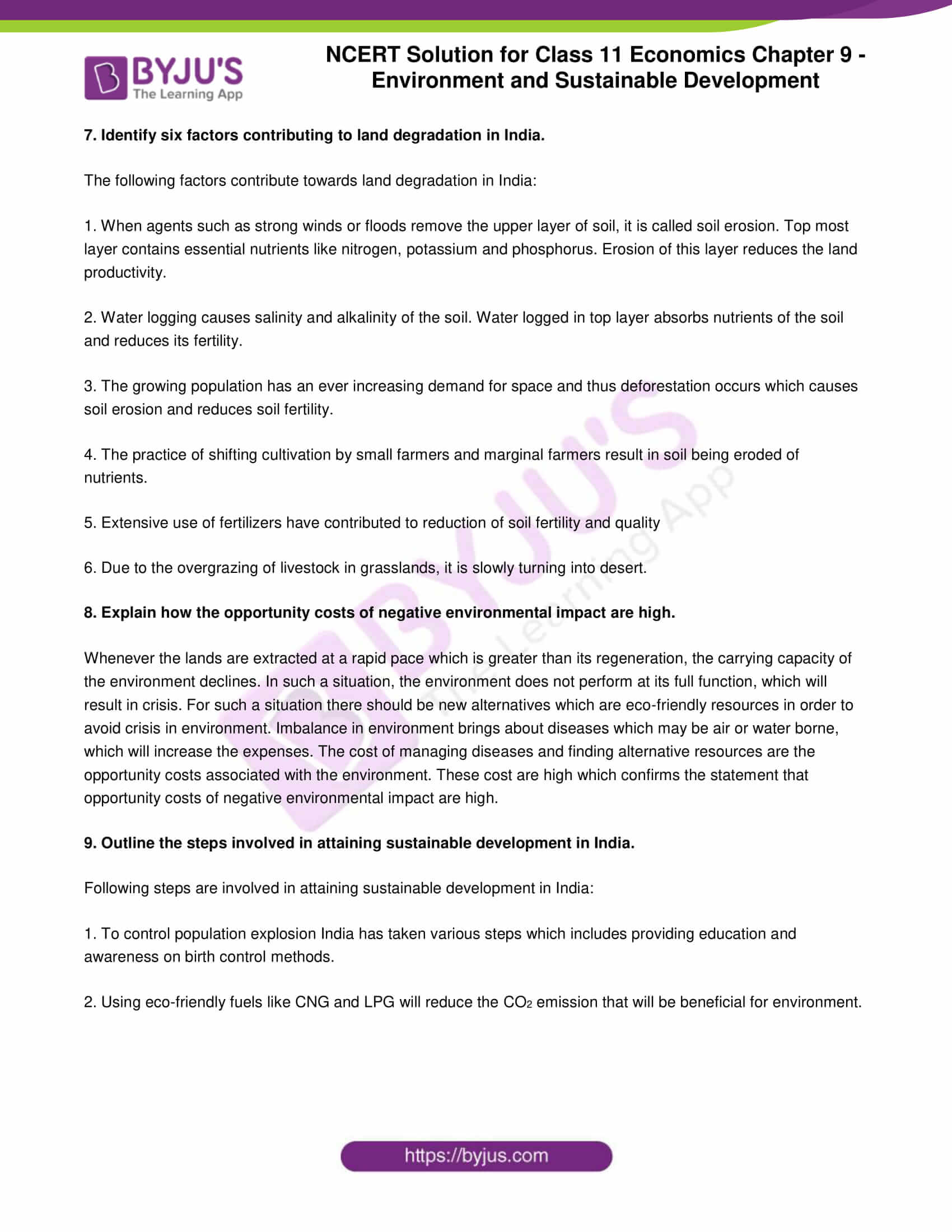 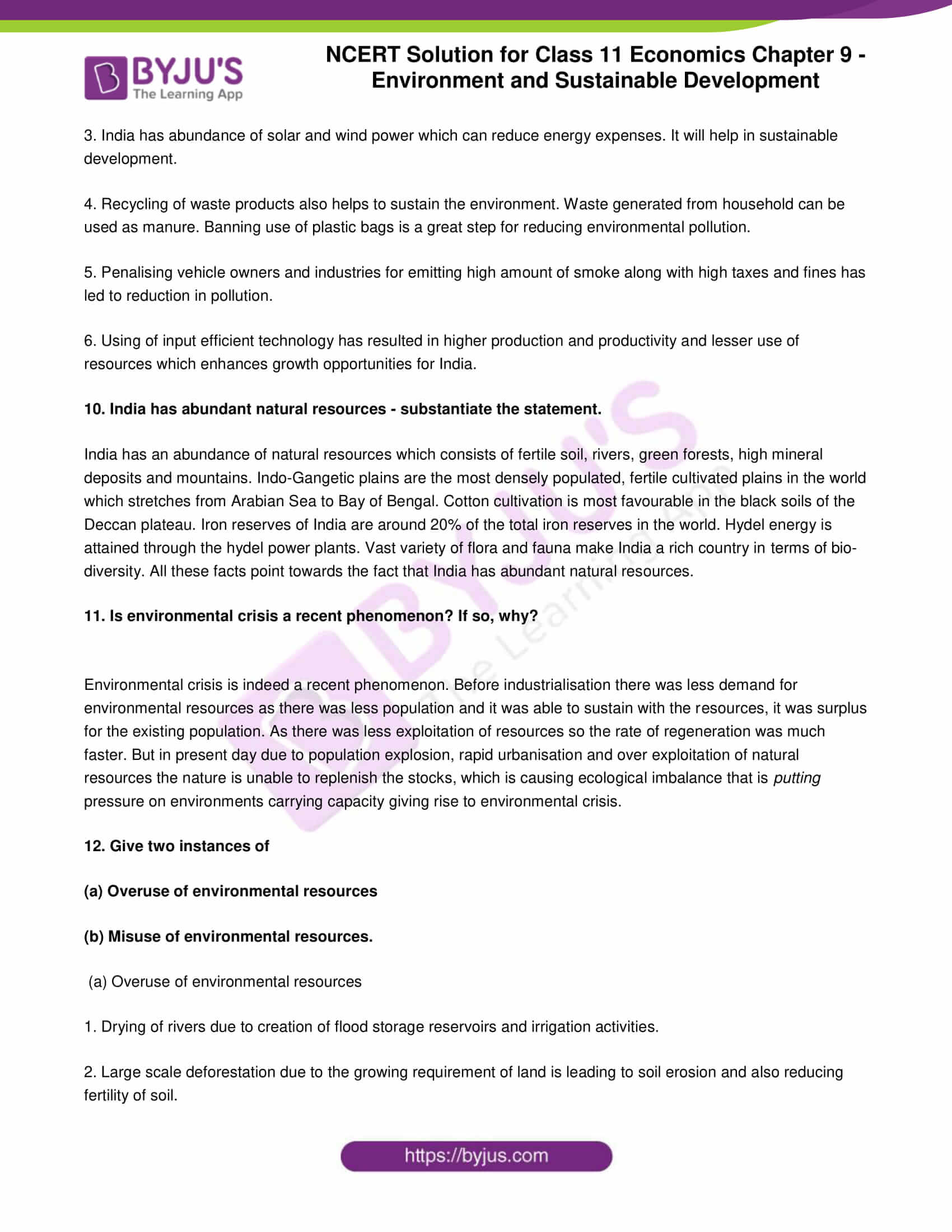 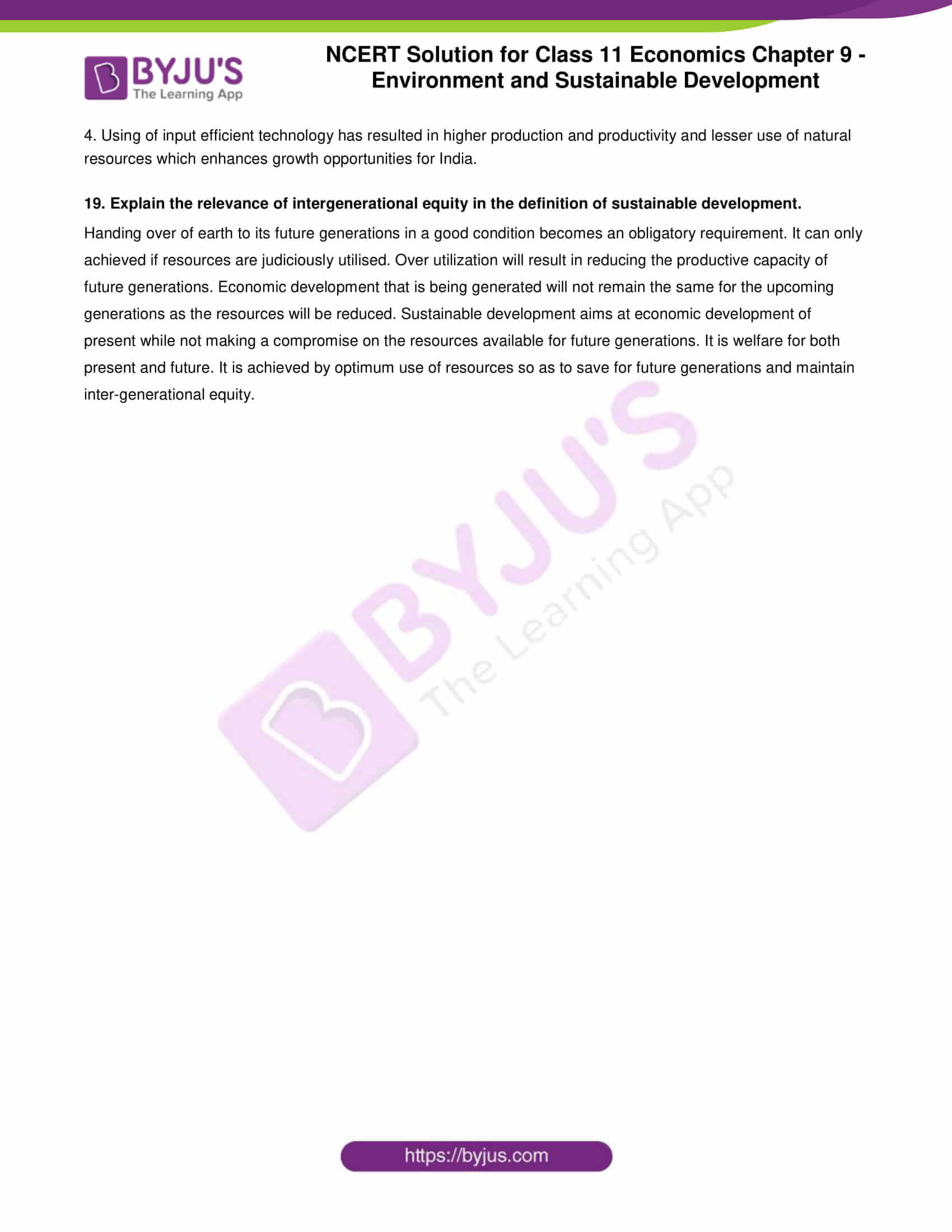 1. What is meant by environment?

It refers to the sum total of all surroundings of a living organism which includes biotic and abiotic factors. Biotic factors comprises of all living creatures while abiotic consists of non-living things like air, water, land etc.

2. What happens when the rate of resource extraction exceeds that of their regeneration?

The function of an environment is to sustain life by providing the necessary ingredients for survival such as sunlight, water, air and soil. If the resources of the environment are extracted at a more rapid pace than its regeneration, we will lose the balance required to sustain life and ultimately it will lead to breakdown of species.

3. Classify the following into renewable and non-renewable resources

Renewable sources are: Trees and fish

5. How do the following factors contribute to the environmental crisis in India? What problem do they pose for the government?

Rise in population leads to depletion of natural resources in the form of deforestation for the purpose of shelter. Depletion of resources leads to ecological imbalance. Government should devise preventive measures to check population explosion.

Water pollution is also one of the leading cause of death from diseases such as hepatitis, cholera etc. Dumping of waste in water bodies’ results in pollution and improper sanitation helps in spread of contaminants and pathogen. The government should install more water purifier machines in order to provide clean water and also promote importance of sanitation in rural areas.

The affluent consumption has put stress on environment. The wastes generated are beyond the capacity of absorption and the resources are becoming extinct which is resulting in environmental crisis. The government should spend on researching resources that are environment friendly.

A literate population will utilize the available resources judiciously with minimum waste by becoming aware and developing skills to utilize the resources. Lack of knowledge and skills will lead to over exploitation of the resources. The government therefore should educate people about the proper utilisation of resources.

Industrialisation is essential for the development of a nation, but one downside is that it reduces the green cover of the earth i.e. it causes deforestation. For obtaining rapid results natural resources are used at a rapid pace which causes harm to environment. These activities disturb the ecological balance. Government should be more careful and prevent unnecessary depletion of natural resources in order to maintain balance with nature.

Urbanisation also leads to deforestation and causes soil pollution along with reduction in rainfall. Rapid urbanisation is reducing the area for farming, in future it will cause huge ecological imbalance and it will be difficult for humans to survive without food. So government should provide measures for promoting green cover and stop the expanding population explosion.

Forest coverage is making the soil loose its holding capacity leading to washing of nutrients and deforestation. Deforestation leads to low oxygen levels and less rainfall, soil erosion and rise in CO2 levels. Thus some effort need to be taken by government for restoring the greenery and maintain ecological balance.

Poaching is an act of killing, capturing or hunting animals. Poaching poses a grave risk of disturbing the balance in nature. Thus more steps need to be taken for conserving the wild animals and their habitat by setting up national parks.

Global warming is the effect of sustained increase in global temperature which is caused due to deforestation and environmental pollution. Greenhouse gas emission is the main culprit. Global warming leads to variation in seasonal temperature and rise in sea level by melting of polar ice. Government should check the level of CO2 emissions and adopt greener methods.

6. What are the functions of the environment?

Functions of environment are as follows:

2. It provides the factors that are critical for a life to survive.

3. Waste is generated due to production and consumption, the environment absorbs these waste.

4. It provides beauty to the man and improves the quality of life.

The following factors contribute towards land degradation in India:

1. When agents such as strong winds or floods remove the upper layer of soil, it is called soil erosion. Top most layer contains essential nutrients like nitrogen, potassium and phosphorus. Erosion of this layer reduces the land productivity.

2. Water logging causes salinity and alkalinity of the soil. Water logged in top layer absorbs nutrients of the soil and reduces its fertility.

3. The growing population has an ever increasing demand for space and thus deforestation occurs which causes soil erosion and reduces soil fertility.

4. The practice of shifting cultivation by small farmers and marginal farmers result in soil being eroded of nutrients.

5. Extensive use of fertilizers have contributed to reduction of soil fertility and quality

6. Due to the overgrazing of livestock in grasslands, it is slowly turning into desert.

8. Explain how the opportunity costs of negative environmental impact are high.

Whenever the lands are extracted at a rapid pace which is greater than its regeneration, the carrying capacity of the environment declines. In such a situation, the environment does not perform at its full function, which will result in crisis. For such a situation there should be new alternatives which are eco-friendly resources in order to avoid crisis in environment. Imbalance in environment brings about diseases which may be air or water borne, which will increase the expenses. The cost of managing diseases and finding alternative resources are the opportunity costs associated with the environment. These cost are high which confirms the statement that opportunity costs of negative environmental impact are high.

9. Outline the steps involved in attaining sustainable development in India.

Following steps are involved in attaining sustainable development in India:

2. Using eco-friendly fuels like CNG and LPG will reduce the CO2 emission that will be beneficial for environment.

3. India has abundance of solar and wind power which can reduce energy expenses. It will help in sustainable development.

4. Recycling of waste products also helps to sustain the environment. Waste generated from household can be used as manure. Banning use of plastic bags is a great step for reducing environmental pollution.

5. Penalising vehicle owners and industries for emitting high amount of smoke along with high taxes and fines has led to reduction in pollution.

6. Using of input efficient technology has resulted in higher production and productivity and lesser use of resources which enhances growth opportunities for India.

India has an abundance of natural resources which consists of fertile soil, rivers, green forests, high mineral deposits and mountains. Indo-Gangetic plains are the most densely populated, fertile cultivated plains in the world which stretches from Arabian Sea to Bay of Bengal. Cotton cultivation is most favourable in the black soils of the Deccan plateau. Iron reserves of India are around 20% of the total iron reserves in the world. Hydel energy is attained through the hydel power plants. Vast variety of flora and fauna make India a rich country in terms of bio-diversity. All these facts point towards the fact that India has abundant natural resources.

11. Is environmental crisis a recent phenomenon? If so, why?

12. Give two instances of

(a) Overuse of environmental resources

(b) Misuse of environmental resources.

(a) Overuse of environmental resources

1. Drying of rivers due to creation of flood storage reservoirs and irrigation activities.

2. Large scale deforestation due to the growing requirement of land is leading to soil erosion and also reducing fertility of soil.

(b) Misuse of environmental resources.

1. The discharge of domestic sewage, waste from thermal power plants and industrial wastes into rivers is causing water pollution.

2. Using wood as a source of fuel for cooking and other purposes is resulting in deforestation

The four most pressing environmental concerns of India are: Water pollution, air pollution, deforestation and soil erosion. In addition to global problems like global warming, ozone depletion, greenhouse gas reduction etc. The rapid and extensive use of both renewable and non-renewable sources has led to exploring of alternative resources which requires high investment. These alternative resources are also high on maintenance. Imbalance in environment brings about diseases which may be air or water borne, which will increase the expenses. The cost of managing diseases and finding alternative resources are the opportunity costs associated with the environment. Therefore correcting environmental damages involves opportunity costs.

Since the start of civilisation and till the rise of industrialisation, the rate at which natural resources were extracted were far less than their rate of regeneration. That means demand fell short of the supply of the resources. That time nature exploitation was within limits. But, coming to present day scenario, the population has seen great surge and there has also been rapid progress in industries which means the rate of extracting natural resources is higher than the rate of regeneration therefore, the demand was far more than the supply. This created ecological imbalance and brought about crisis which can be referred to as the supply demand reversal of environmental resources.

Increase in population and consumption of all the natural resources has placed excessive burden on the environment. Reserves are getting exhausted but the regeneration is not on par which is causing reduction in carrying capacity of environment, resulting in ecological imbalance. The current environmental crisis includes ozone layer depletion and global warming. Global warming is the result if increase of greenhouse gases (particularly CO2) and it is increasing the temperature of earth causing melting of polar ice which is making water levels in the sea levels to increase. Also ozone layer depletion is caused due to excess use of CFC’s (chlorofluorocarbon). Increased UV radiation will cause skin cancer in individuals. Therefore these factors are most concerning of all issues currently.

16. Highlight any two serious adverse environmental consequences of development in India. India’s environmental problems pose a dichotomy-they are poverty induced and, at the same time, due to affluence in living standards. Is this true?

Development has led to the following environmental consequences in India which are: air pollution and land degradation.

Air pollution: Air pollution is a major problem in India with lots of industrial smoke, agricultural waste burning and exhaust fumes from automobiles. All these contribute to increase in the levels of harmful gases in atmosphere which is a major cause of global warming.

Land Degradation: Gradual and consistent loss of land fertility is known as degradation of land. It is usually caused by factors such as soil erosion, salinity of soil, deforestation and shifting cultivation which is practiced by farmers.

Deforestation resulted from population explosion and poverty. People in rural areas in order to earn livelihood cut down trees which resulted in deforestation and soil erosion. The widespread urbanisation also is robbing the nature of its green cover. More and more buildings are getting built which is reducing the trees and causing harm to environment. If both these factors are studied carefully we see that the environmental problems are due to the combined effect of poverty and affluent living standards.

17. What is sustainable development?

18. Keeping in view your locality, describe any four strategies of sustainable development.

Sustainable development can be achieved using these strategies:

1. Using eco-friendly fuels like CNG and LPG will reduce the CO2 emission which will be beneficial for environment

2. India has abundance of solar and wind power which can reduce energy expenses. Using these sources will help in sustainable development.

3. Recycling of waste products also helps to sustain the environment. Waste generated from household can be used as manure. Banning use of plastic bags is a great step for reducing environmental pollution and attaining sustainable development.

4. Using of input efficient technology has resulted in higher production and productivity and lesser use of natural resources which enhances growth opportunities for India.

19. Explain the relevance of intergenerational equity in the definition of sustainable development. 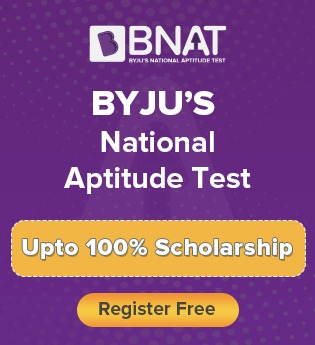 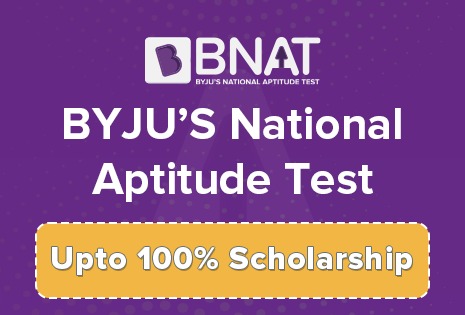