NCERT Solutions for Class 11 English Woven Words Poetry Chapter 10 is an autobiographical account in which the poet represents his relocation from Baroda to Bombay. The solutions come with well written and accurate answers to all the questions from the NCERT textbook. The team of subject experts at BYJU’S aim to provide the students with a step by step guide on the important themes with the help of the NCERT Solutions.

Chapter 10 of NCERT Solutions for Class 11 English Woven Words Poetry has answers in a detailed manner to help students ace the exam without fear. These solutions completely stick to the latest CBSE guidelines to help students understand how to create impactful answers from the exam point of view. The PDF version of solutions are made available on BYJU’S which can be accessed by the students anywhere and at any time without any restrictions. 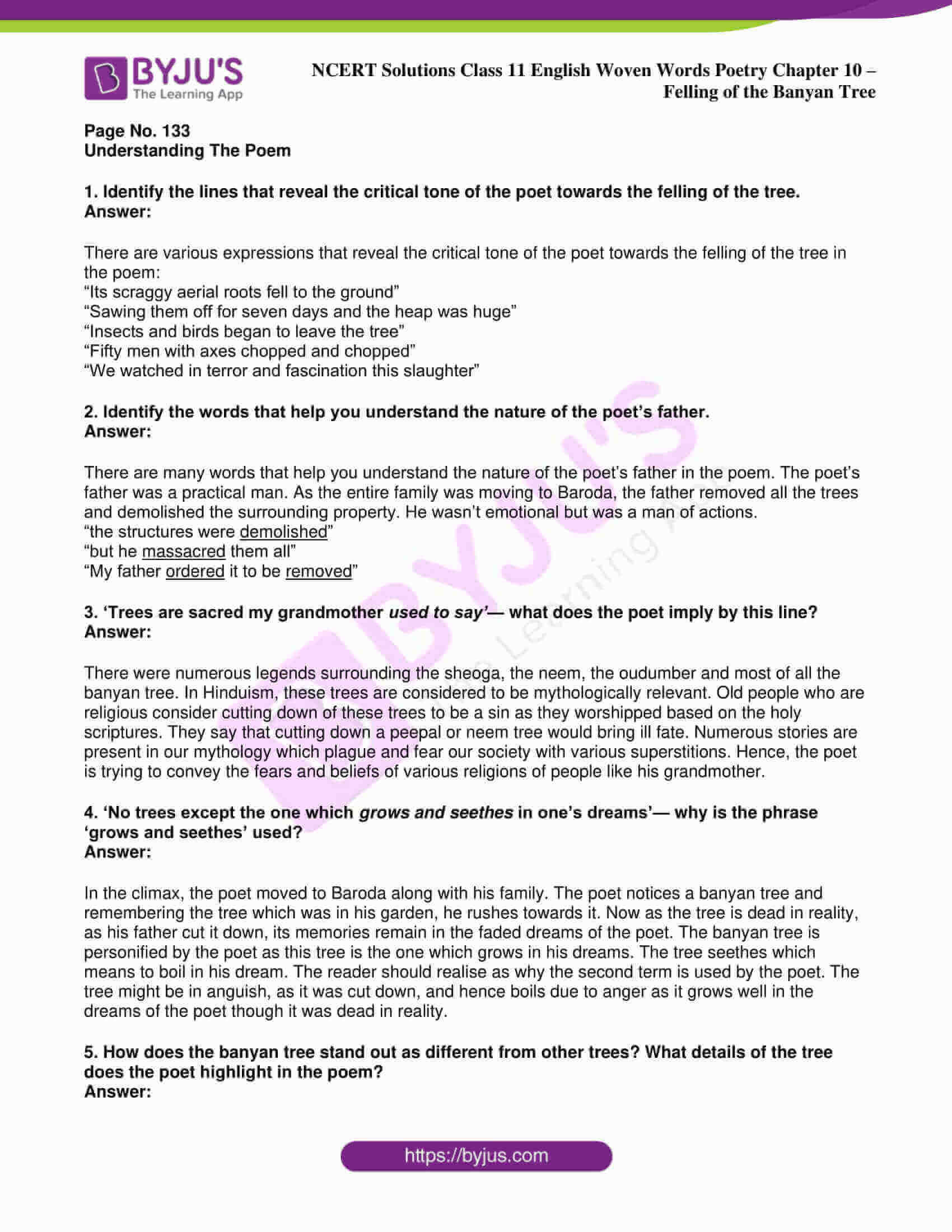 1. Identify the lines that reveal the critical tone of the poet towards the felling of the tree.

There are various expressions that reveal the critical tone of the poet towards the felling of the tree in the poem:

“Its scraggy aerial roots fell to the ground”

“Sawing them off for seven days and the heap was huge”

“Insects and birds began to leave the tree”

“We watched in terror and fascination this slaughter”

2. Identify the words that help you understand the nature of the poet’s father.

There are many words that help you understand the nature of the poet’s father in the poem. The poet’s father was a practical man. As the entire family was moving to Baroda, the father removed all the trees and demolished the surrounding property. He wasn’t emotional but was a man of actions.

“the structures were demolished”

“but he massacred them all”

“My father ordered it to be removed”

3. ‘Trees are sacred my grandmother used to say’— what does the poet imply by this line?

There were numerous legends surrounding the sheoga, the neem, the oudumber and most of all the banyan tree. In Hinduism, these trees are considered to be mythologically relevant. Old people who are religious consider cutting down of these trees to be a sin as they worshipped based on the holy scriptures. They say that cutting down a peepal or neem tree would bring ill fate. Numerous stories are present in our mythology which plague and fear our society with various superstitions. Hence, the poet is trying to convey the fears and beliefs of various religions of people like his grandmother.

In the climax, the poet moved to Baroda along with his family. The poet notices a banyan tree and remembering the tree which was in his garden, he rushes towards it. Now as the tree is dead in reality, as his father cut it down, its memories remain in the faded dreams of the poet. The banyan tree is personified by the poet as this tree is the one which grows in his dreams. The tree seethes which means to boil in his dream. The reader should realise as why the second term is used by the poet. The tree might be in anguish, as it was cut down, and hence boils due to anger as it grows well in the dreams of the poet though it was dead in reality.

5. How does the banyan tree stand out as different from other trees? What details of the tree does the poet highlight in the poem?

Banyan tree is one of the most religious trees as per the mythology of Hinduism. It is well known that Buddha had renounced in Bodh Gaya under a banyan tree. There are numerous such stories in which this tree contains its aerial roots falling mysteriously to the ground. The poet likes the figure of the banyan tree and says, “The great tree revealed its rings of two hundred years”. The explanation about the banyan tree creates a picture of mystery. The aerial roots of the tree dangling from above reaches to the ground. They are the main proof of the number of decades and years lived by the tree. It is a hard and strong tree which requires more effort to cut it. When this occurs, the slaughter of the banyan tree is watched with fascination and terror. It looks like a raw mythology, which was age old, was revealed during the period of the poet and his folks.

6. What does the reference to raw mythology imply?

The banyan tree is mythological, as his grandmother calls its name along with a few other sacred trees. A sentiment is created in the poet and the reader while reading the poem. When the banyan tree is cut down according to the poet’s father’s order, a mystery is disclosed. The aerial roots of the banyan tree were brought down from the old trunk which had a fifty feet circumference. It is an age old tree containing all the knowledge knotted inside it. When it is cut down, the poet feels that all the mythology is revealed. The concealed darkness, the enlightenment it possessed from a long time is highlighted in this situation. The answers for all the logics was beheld by the tree and now was slaughtered.

7. ‘Whose roots lay deeper than our lives’— what aspect of human behaviour does this line reflect?

The life cycle of a banyan tree is a special one as it grows as an epiphyte. It lives for about 200 years or even 400-450 years. The average life of humans is 70-80 years in contrast. It is noted that a single banyan tree may survive several generations of humans. The tree contains strangled roots knotted in its huge trunk which grows for centuries. The tree transcends the life of humans and grows with knowledge it witnesses all the while. The poet has compared the life of humans to that of a banyan tree. All the mythical hugeness which makes it a mystery. Humans are thrown into surprise and bewilderment for the knowledge which it contains in its trunks growing its aerial roots to reach the ground. It resembles the life it has led for centuries and witnessing all the life of humans which perished and descended by time standing erect and tall.

8. Comment on the contemporary concern that the poem echoes.

The poet is worried about the changing traditions which are affected by modern ideology. The value of the trees in the earlier days is not a concern to the people of modern society. The age old culture is breaking apart giving away to the western studies and science. The values which are religious, taught to a child from childhood are paid no heed to. Life in the current world is busy not only consuming space and time but our lifestyle as well. The values raised by our tradition are treated as old. The poet has written the poem based on the changes our society is going through.

Explain the importance of a banyan tree in the NCERT Solutions for Class 11 English Poetry Chapter 10.

The banyan tree in the NCERT Solutions for Class 11 English Poetry Chapter 10 is a metaphor in the life of the poet and his family. This poem is an autobiographical account of the life of the poet and his family who had to shift from Baroda to Mumbai. The roots of the banyan tree depict the values which run deep in the foundation of the family. So, cutting off the branches does not tear it down easily until humans strike at the roots, which demonstrates the uprooting of the traditions in a family. According to Hindu mythology, the banyan tree is a religious symbol which adds to its importance in this poem.

What is the main concept covered in the NCERT Solutions for Class 11 English Poetry Chapter 10?

The main concept covered in the NCERT Solutions for Class 11 English Poetry Chapter 10 is the demolition of old habits and values. The father of the poet is an individual who ordered the demolition of houses on a hill and the banyan tree which stood there for many years. The difficulty which lies in tearing down this tree without cutting the roots depicts deep rooted issues, which run deeper than the actual life of the individual.
Another concept is the technological advancement which occurs due to the ecological balance. The father of the poet is portrayed as a dominant and progressive male who takes decisions for his family including their shift from Baroda to Mumbai.

Is the NCERT Solutions for Class 11 English Poetry Chapter 10 a reliable reference guide for the students?

The NCERT Solutions for Class 11 English Poetry Chapter 10 contains elaborate and precise answers which are drafted by the academic professionals possessing vast experience. The solutions are formulated after extensive and dedicated research to provide students with accurate information. The lengthy syllabus in English can be completed in no time with the solutions available given in a lucid language. The topic wise exercises improve the grammatical skills among the students to ace the exam.