NCERT Solutions for Class 11 English Woven Words Poetry Chapter 9 provides students with the confidence to obtain decent scores in both internal and external exams. As English is considered a comfortable subject from the exam perspective, students often fail to prioritize it. Equal attention should be given to this subject; otherwise it gets difficult to grasp the various elements. The NCERT Solutions play a vital role in helping students to perform well in the Class 11 exam.

Chapter 9 of NCERT Solutions for Class 11 English Woven Words Poetry contains a unique set of question and answer patterns which eventually help in obtaining the desired results. Students will be able to learn about the core concepts using the solutions, which further help in the higher levels of education. These solutions assist the Class 11 students with accurate answers without making it inundated with irrelevant information. 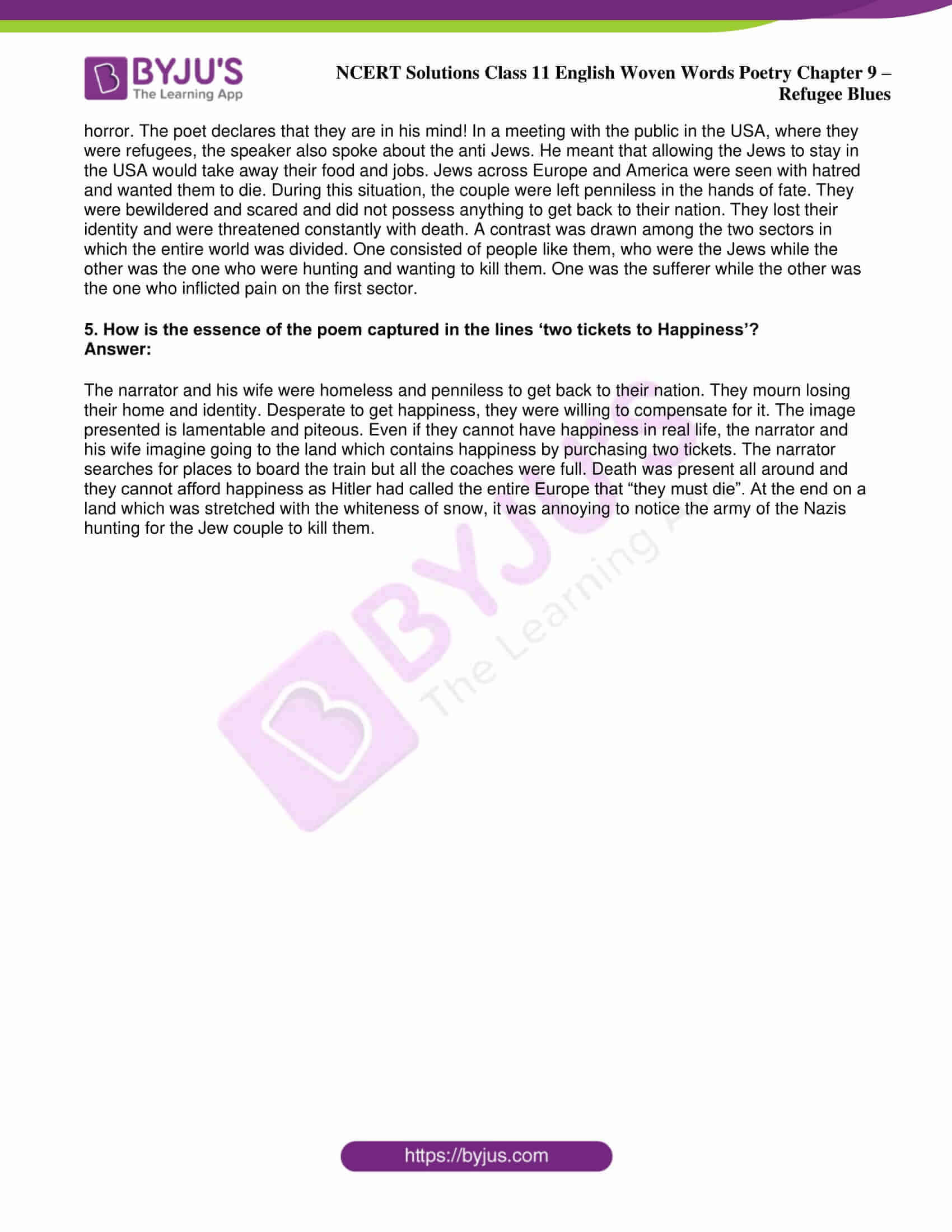 1. The title, ‘Refugee Blues’ encapsulates the theme of the poem. Comment.

The African-American form of ballads called Blues arose by the end of the 19th century. They are basically sad and melancholic and are known as “the sad black slave’s songs”. In this poem, the poet explains the suffering of the Jews by the Nazis, the camps, the holocaust, their persecution, the rise of Nazism and Fuhrer. This poem mainly narrates the story of a Jewish couple who emigrated to the United States of America after escaping from the Nazi Germany. These refugees sing the Blues explaining their pain and agony which they possess during the tough situation.

2. What is the poetic technique used by the poet to convey the plaintive theme of the poem?

The poem ‘Refugee Blues’ is a Blue Ballad which explains his character. In Britain and Ireland, Ballads were famous till the 18th century whereas the African-American form of ballads called Blues arose by the end of the 19th century. The poet who was a British who migrated to the USA, uses two basic techniques to carry out the beauty, which sings about the sufferings and sorrows of the Jewish Refugees. In this poem, the metre which he used is similar to the ones he has used in ‘Calypso’ which was written in the 1930. The Ballads were famous forms of verse which were narrative in the middle age while the Blues is an African-American music category which contains a strong pattern based on the use of a rhyme scheme which is simple and has repetitions. In every stanza, the first two lines rhyme with each other called a tercet while the third line provides a repetitive pattern using the phrase “my dear”, which is repeated in every third line providing consistency to the entire poem. It is very interesting to see that the first word in every stanza is a verb. This poem is a first person narrative in an informal and colloquial language.

3. What do the references to the birds and animals made in the poem suggest?

This poem is melancholic which explains the terror hovering over a Jew couple who escape to America and their misery for no one sympathises with them. The fear of losing their home and death constantly haunted them. They were unwelcome even in America as they were accused of taking away their bread. The poet compares the free animals and birds to the lives of the Jews. The freedom enjoyed by the cat, dog or fish is not given to the Jew couple. They remember the Fuhrer orders in order to wash away the entire race of the Jews through the concentration camps or holocausts where they were pushed into the gas chambers. Here, it is noticed that even the animals have freedom and are respected in America while the Jews living in Germany do not have the rights to live according to the regime of the Nazis. The narrator is sad that even a fish which was 10 feet away from the narrator can swim happily while the narrator is grieving at the misery of himself and his wife.

4. How does the poet juxtapose the human condition with the behaviour of the political class?

The poem is curated in an environment where the entire Germany came up with the Nazism ideology where the political thinkers were strong to eliminate the entire community of the Jews. The rumbling of Hitler that “they must die” created terror waves in Europe which paralysed the Jews into a state of horror. The poet declares that they are in his mind! In a meeting with the public in the USA, where they were refugees, the speaker also spoke about the anti Jews. He meant that allowing the Jews to stay in the USA would take away their food and jobs. Jews across Europe and America were seen with hatred and wanted them to die. During this situation, the couple were left penniless in the hands of fate. They were bewildered and scared and did not possess anything to get back to their nation. They lost their identity and were threatened constantly with death. A contrast was drawn among the two sectors in which the entire world was divided. One consisted of people like them, who were the Jews while the other was the one who were hunting and wanting to kill them. One was the sufferer while the other was the one who inflicted pain on the first sector.

5. How is the essence of the poem captured in the lines ‘two tickets to Happiness’?

The narrator and his wife were homeless and penniless to get back to their nation. They mourn losing their home and identity. Desperate to get happiness, they were willing to compensate for it. The image presented is lamentable and piteous. Even if they cannot have happiness in real life, the narrator and his wife imagine going to the land which contains happiness by purchasing two tickets. The narrator searches for places to board the train but all the coaches were full. Death was present all around and they cannot afford happiness as Hitler had called the entire Europe that “they must die”. At the end on a land which was stretched with the whiteness of snow, it was annoying to notice the army of the Nazis hunting for the Jew couple to kill them.

How to study the NCERT Solutions for Class 11 English Poetry Chapter 9 from BYJU’S?

With the various study materials available on the internet, it is challenging for the students to obtain authentic reference materials. While searching, students should find out the problems they face in the subject and try to search for those particular ones. The subject matter experts at BYJU’S have drafted the NCERT Solutions for Class 11 English Poetry Chapter 9 as per the latest syllabus and guidelines. Referring to these solutions will help the students achieve better results in the annual exam.

What is the theme explained in the NCERT Solutions for Class 11 English Poetry Chapter 9?

This poem contains details about the period when Nazi oppression was occuring in Germany. To understand this poem in a better way, students should study in detail about the period and the incidents which took place in Germany. The facts should be understood by the students apart from the fictional part to make the answers more impactful. The NCERT Solutions for Class 11 English Poetry Chapter 9 provides detailed information about the context along with proper research that makes learning the themes easier.

The NCERT Solutions for Class 11 English Poetry Chapter 9 provides accurate data for the students to enhance their learning. This subject can be challenging as it contains numerous stories, poems and essays. To grasp these effectively, students should refer to the study materials which have correct information. As the chapters have complex elements, students should research first and then start drafting the answers. These solutions provide essential data and fulfil the requirements of the students to attain remarkable results.