NCERT Solutions for Class 11 English Woven Words Poetry Chapter 4 will help students to understand the social discriminations which are still prevalent in our society. The solutions are designed by the faculty at BYJU’S to facilitate quality learning among students and pave the way to score good marks. Among the various study materials available in the market, the NCERT Solutions enables students to learn the chapters faster and perform better in the annual exam.

Chapter 4 of NCERT Solutions for Class 11 English Woven Words Poetry is present in PDF format which can be downloaded and used by the students without any restrictions. The main aim of providing solutions is to help the students obtain a grip on the language, which would further reflect in their higher levels of education. It also improves grammatical skills and their ability to form answers according to the questions that would appear in the Class 11 exam. 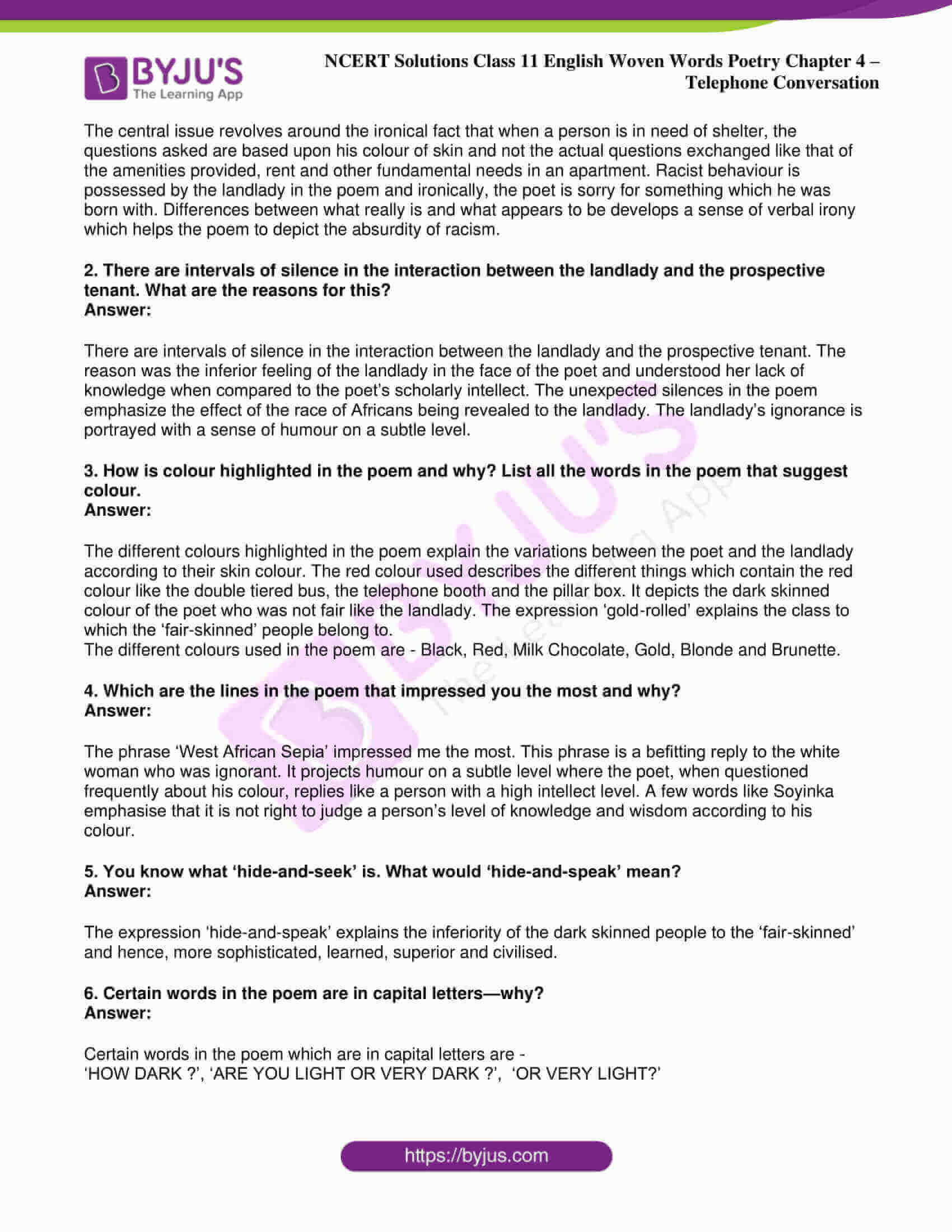 rancid breath – Rancid refers to a matter which is disagreeable or offensive. Hence, the lady’s voice when she speaks to the poet is immensely unpleasant or nasty..

squelching tar – Squelch is a verb which means to press or strike with a crushing force. Hence, the expression which is used here is that of a large amount of tar, a dark coloured product which is obtained after the distillation of wood or coal, describing the poet’s complexion.

spectroscopic flight of fancy – Spectroscopy is a word which originated from the topic of dispersion of light into seven different colours. Hence, the word describes the dispersed flow of thoughts of the lady after talking to the poet. Her fancies of a dark man gaining wings and attaining high levels of interpretation when she had to accept the fact that she did not know much more than the person on the other side.

rearing on the thunderclap – Thunderclap resembles the unexpected occurrence of thunder, as in loudness.

peroxide blonde – This term refers to the unnaturally or harsh bleached palm and the sole of feet rather than the fair complexion. Peroxide is basically a chemical used as a bleaching agent.

clinical assent – The lady’s voice in the poem sounded clinical when assenting to the revelation of the poet. It means the concerned voice according to an actual and vivid observation of the poet, giving into the situation after a lot of inspection and thoughts.

raven black – Raven black is a metaphorical expression which explains the intensity of black colour. Raven is a large, dark coloured bird of the crow family. This metaphor is used to describe people who are dark skinned.

1. State the central issue in the poem.

The central issue revolves around the ironical fact that when a person is in need of shelter, the questions asked are based upon his colour of skin and not the actual questions exchanged like that of the amenities provided, rent and other fundamental needs in an apartment. Racist behaviour is possessed by the landlady in the poem and ironically, the poet is sorry for something which he was born with. Differences between what really is and what appears to be develops a sense of verbal irony which helps the poem to depict the absurdity of racism.

2. There are intervals of silence in the interaction between the landlady and the prospective tenant. What are the reasons for this?

There are intervals of silence in the interaction between the landlady and the prospective tenant. The reason was the inferior feeling of the landlady in the face of the poet and understood her lack of knowledge when compared to the poet’s scholarly intellect. The unexpected silences in the poem emphasize the effect of the race of Africans being revealed to the landlady. The landlady’s ignorance is portrayed with a sense of humour on a subtle level.

3. How is colour highlighted in the poem and why? List all the words in the poem that suggest colour.

The different colours highlighted in the poem explain the variations between the poet and the landlady according to their skin colour. The red colour used describes the different things which contain the red colour like the double tiered bus, the telephone booth and the pillar box. It depicts the dark skinned colour of the poet who was not fair like the landlady. The expression ‘gold-rolled’ explains the class to which the ‘fair-skinned’ people belong to.

The different colours used in the poem are – Black, Red, Milk Chocolate, Gold, Blonde and Brunette.

4. Which are the lines in the poem that impressed you the most and why?

The phrase ‘West African Sepia’ impressed me the most. This phrase is a befitting reply to the white woman who was ignorant. It projects humour on a subtle level where the poet, when questioned frequently about his colour, replies like a person with a high intellect level. A few words like Soyinka emphasise that it is not right to judge a person’s level of knowledge and wisdom according to his colour.

5. You know what ‘hide-and-seek’ is. What would ‘hide-and-speak’ mean?

The expression ‘hide-and-speak’ explains the inferiority of the dark skinned people to the ‘fair-skinned’ and hence, more sophisticated, learned, superior and civilised.

6. Certain words in the poem are in capital letters—why?

Certain words in the poem which are in capital letters are –

These words explain the purpose of the poem which is to highlight the racist mentality of the fair-skinned. During the conversation of the landlady with the tenant, the matter of concern should be based on whether the person is suitable to stay according to the financial position,  behaviour, etc. and not on the colour of the skin. These words in capital letters explain the fact that it is important for the landlady to know the skin colour of the person who is on the other side of the phone, rather than how knowledgeable or well behaved or intellectual he might be.

7. Why do you think that the poet has chosen the title ‘Telephone Conversation’? If you were to suggest another title for the poem, what would it be?

‘Different – are We?’ could be another title of the poem.

The poet has chosen an appropriate title for the poem – ‘Telephonic Conversation’. It aptly refers to the racism which is projected in the conversation between the fair-skinned landlady and the dark-skinned poet. The telephone explains the gap between the two ends of the line and the impossibility for the ends to meet.

8. The power of poetry lies in suggestion and understatement. Discuss this with reference to the poem.

Understatement refers to represent or state less strikingly or strongly than the facts would carry. It is well known that to decide the level or status of one’s knowledge according to their colour is understating. The conversation between the poet and the landlady proves that the region and colour of a man is of less importance than the education levels possessed and the wisdom he has. The questions of the landlady turned into an insult at her own level of intellect. The poem suggests that the questions based on civilisation do not depend upon the colour of a person. Wole Soyinka uses sarcasm humorously as he converys ‘Shamed By ill-mannered silence’ when it is clear that it is the landlady who is ill-mannered among the two.

What does “Telephone Conversation” refer to in the NCERT Solutions for Class 11 English Poetry Chapter 4?

The name of the poem in the NCERT Solutions for Class 11 English Poetry Chapter 4 refers to the gap between two races due to the variations in the skin complexion. As the distance between two people cannot be reduced, the poet believes that this discrimination is inevitable. The two characters portrayed in this shows the truth which lies behind his conviction. The lady who was fair skinned and the poet who was dark skinned play the character of the oppressor and the oppressed in this poem.

What will I learn from the NCERT Solutions for Class 11 English Poetry Chapter 4?

The NCERT Solutions for Class 11 English Poetry Chapter 4 explains the importance of teaching young minds on how to choose cultural harmony over racial discrimination. By going through this poem, students will be aware that it is the code of conduct which makes one person superior to the other. It is an offence to judge others based on their skin complexion. It will teach the students that respect should be given to their fellow human beings, irrespective of their skin colour.

Where can I get the best answers to the NCERT Solutions for Class 11 English Poetry Chapter 4?

Among the various books present in the market, nothing can be compared with the NCERT Solutions for Class 11 English Poetry Chapter 4 from BYJU’S. By referring to these solutions, students will be able to create quality and accurate answers in the annual exam. These solutions completely adhere to the latest syllabus and guidelines of the CBSE board. It will also improve the logical and analytical thinking skills among the Class 11 students, which are important from the exam point of view.