NCERT Solutions are contemplated as an exceptionally helpful book while preparing for the CBSE Class 12 Economics Board examinations. This study resource possesses an intense knowledge and the Solutions collated by the subject matter experts are no different. 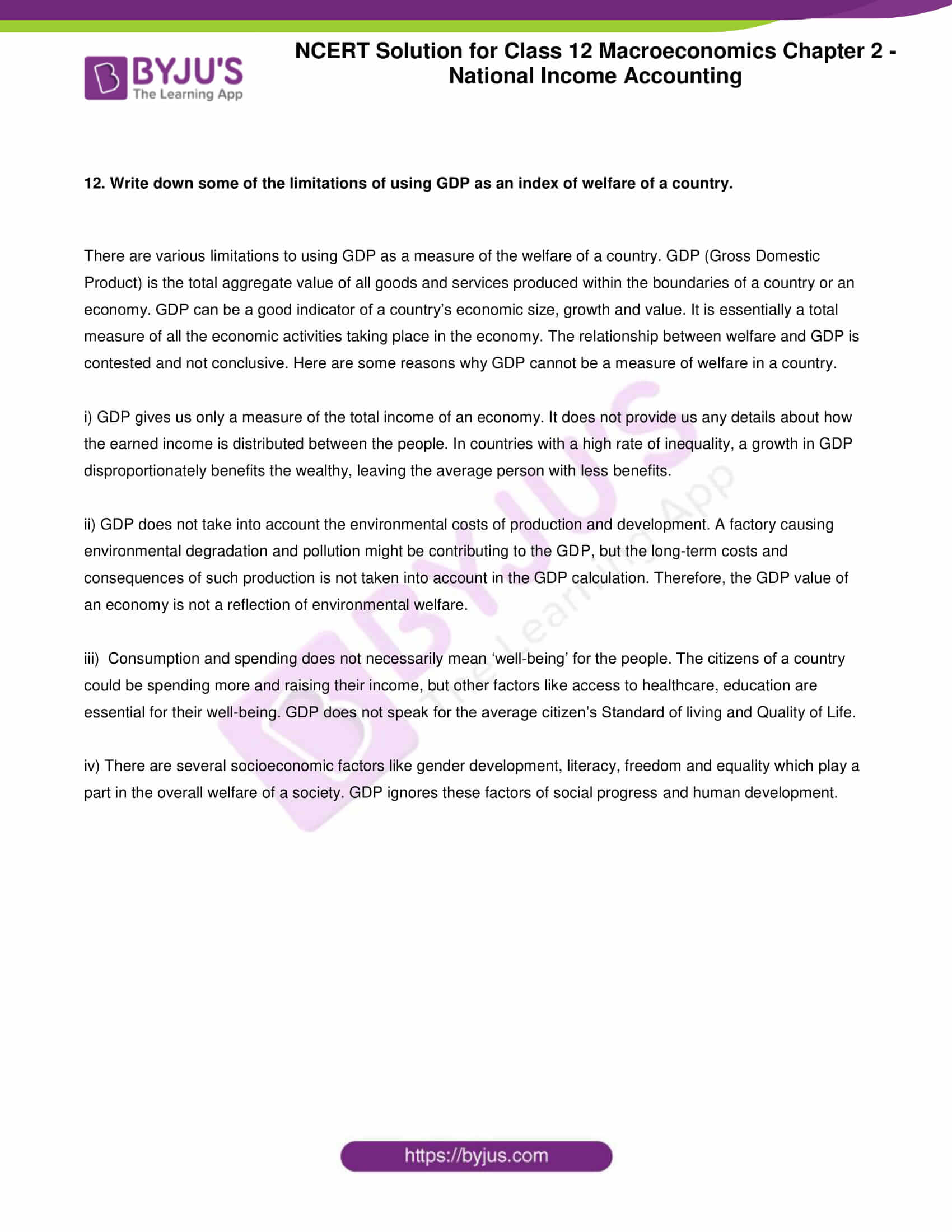 1. What are the four factors of production and what are the remunerations to each of these called?

Land, Labour, Capital and Entrepreneurship are the four factors of production.

i) The land is a natural resource and the primary factor of production. Land rent is the remuneration paid for the use of land.

ii) Labour is the physical or mental work done by an employee that is required for production. The remuneration for labour is paid through wages or salary.

iii) Capital is the wealth or monetary investment that is essential for production. Capital can also mean the assisting tools, the machinery and other means of production. The remuneration for capital is called interest.

iv) Entrepreneurship refers to the task of the individual who brings all the factors of production together and manages them. The remuneration or reward of the entrepreneur is the profit that is gained after the product is sold.

The difference between stock and flow are as follows

The difference between net investment and capital is explained below

4. What is the difference between planned and unplanned inventory accumulation? Write down the relation between change in inventories and value added of a firm.

5. Write down the three identities of calculating the GDP of a country by the three methods. Also briefly explain why each of these should give us the same value of GDP.

The three methods of identifying GDP of a nation are:

The formulae for calculating GDP is

C=Consumer spending on goods and services

Therefore national income can be calculated as:

Product Method: In this method which is also known as value added method, the income is measured as per value addition by the products of firms. It is calculated as the summation of Gross Value Added in the primary, secondary and tertiary sectors.

Budget deficit is referred to the situation when the expenditure done by government exceeds its income.

G is the expenditure done by government

T is the income earned by the government

When a country spends more on importing than on earning revenue through exports, such a situation is referred to as trade deficit

As per the question

Therefore, trade deficit can be calculated as

7. Suppose the GDP at market price of a country in a particular year was Rs 1,100 crores. Net Factor Income from Abroad was Rs 100 crores. The value of Indirect taxes − Subsidies was Rs 150 crores and National Income was Rs 850 crores. Calculate the aggregate value of depreciation. 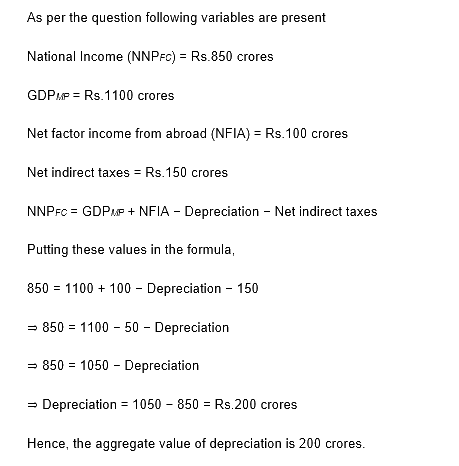 10. In a single day Raju, the barber, collects Rs 500 from haircuts; over this day, his equipment depreciates in value by Rs 50. Of the remaining Rs 450, Raju pays sales tax worth Rs 30, takes home Rs 200 and retains Rs 220 for improvement and buying of new equipment. He further pays Rs 20 as income tax from his income. Based on this information, complete Raju’s contribution to the following measures of income (a) Gross Domestic Product (b) NNP at market price (c) NNP at factor cost (d) Personal income (e) Personal disposable income.

(i) Gross Domestic Product or GDP = Rs.500 (This is the earning by Raju in a day from haircuts)

Putting the values of GDP and depreciation we get NNPMP

Putting values of PI and Income Tax we get PDI is

11. The value of the nominal GNP of an economy was Rs 2,500 crores in a particular year. The value of GNP of that country during the same year, evaluated at the prices of same base year, was Rs 3,000 crores. Calculate the value of the GNP deflator of the year in percentage terms. Has the price level risen between the base year and the year under consideration? 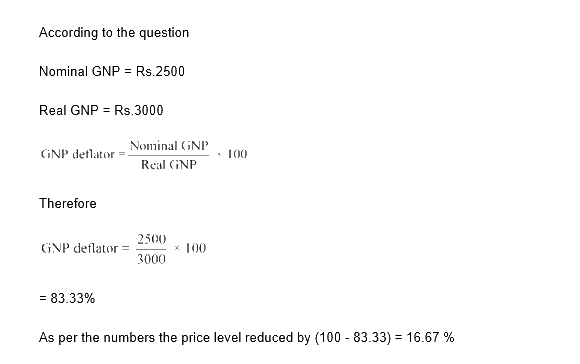 12. Write down some of the limitations of using GDP as an index of welfare of a country.

There are various limitations to using GDP as a measure of the welfare of a country. GDP (Gross Domestic Product) is the total aggregate value of all goods and services produced within the boundaries of a country or an economy. GDP can be a good indicator of a country’s economic size, growth and value. It is essentially a total measure of all the economic activities taking place in the economy. The relationship between welfare and GDP is contested and not conclusive. Here are some reasons why GDP cannot be a measure of welfare in a country.

i) GDP gives us only a measure of the total income of an economy. It does not provide us any details about how the earned income is distributed between the people. In countries with a high rate of inequality, a growth in GDP disproportionately benefits the wealthy, leaving the average person with less benefits.

ii) GDP does not take into account the environmental costs of production and development. A factory causing environmental degradation and pollution might be contributing to the GDP, but the long-term costs and consequences of such production is not taken into account in the GDP calculation. Therefore, the GDP value of an economy is not a reflection of environmental welfare.

iii)  Consumption and spending does not necessarily mean ‘well-being’ for the people. The citizens of a country could be spending more and raising their income, but other factors like access to healthcare, education are essential for their well-being. GDP does not speak for the average citizen’s Standard of living and Quality of Life.

iv) There are several socioeconomic factors like gender development, literacy, freedom and equality which play a part in the overall welfare of a society. GDP ignores these factors of social progress and human development.