NCERT Solutions are considered as a helpful study material while preparing for the CBSE Class 12 Economics Board examinations. This study resource possesses an intense knowledge and the Solutions collated by the subject matter experts are no different. 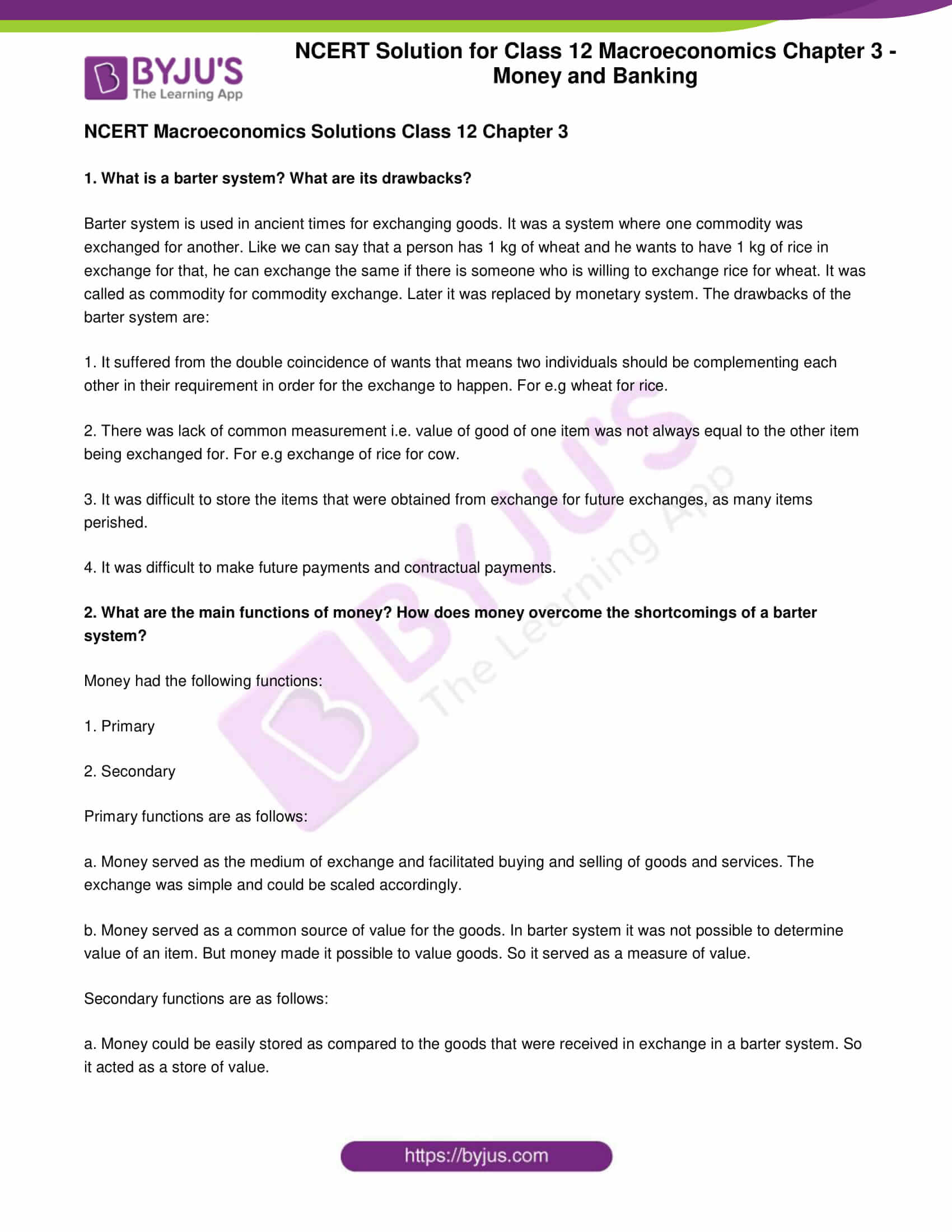 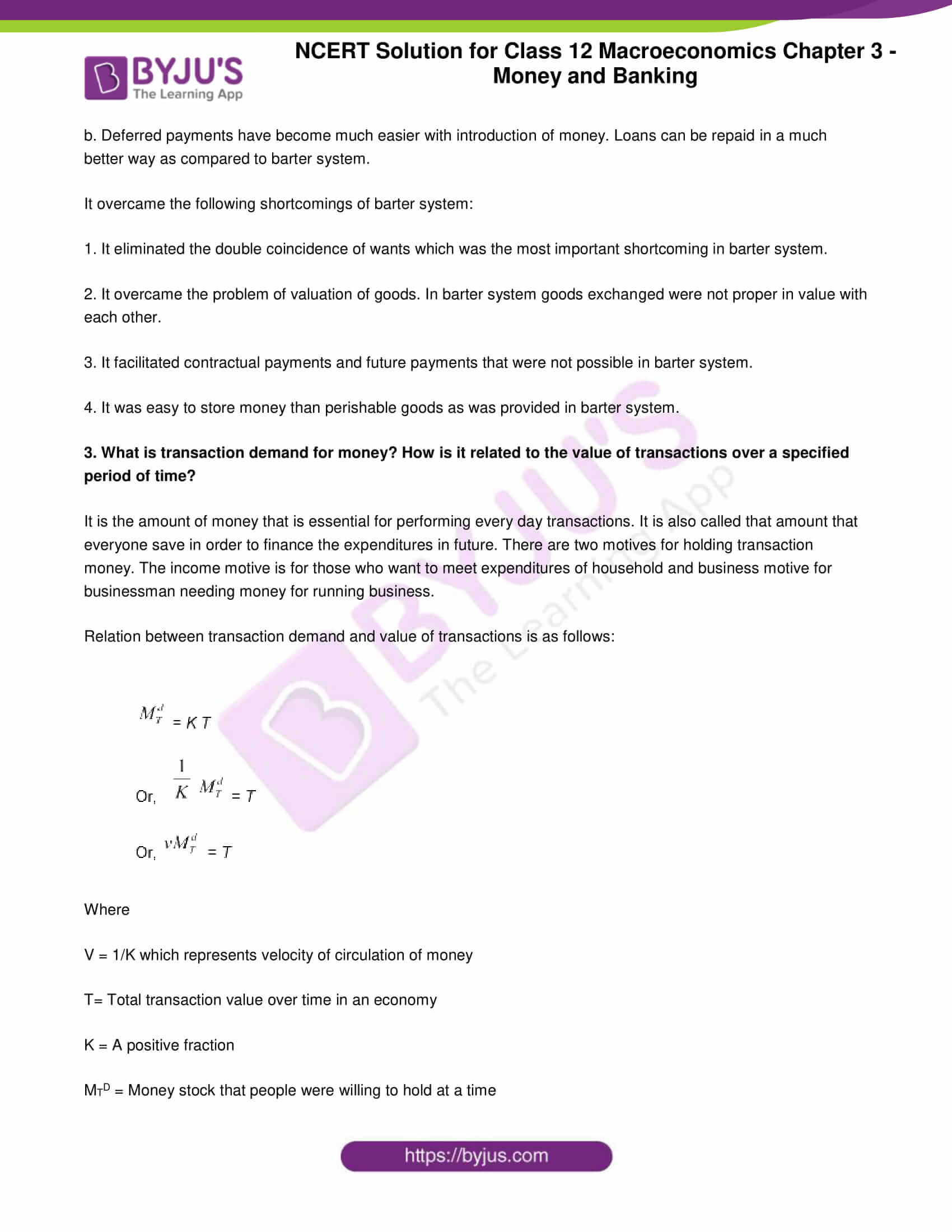 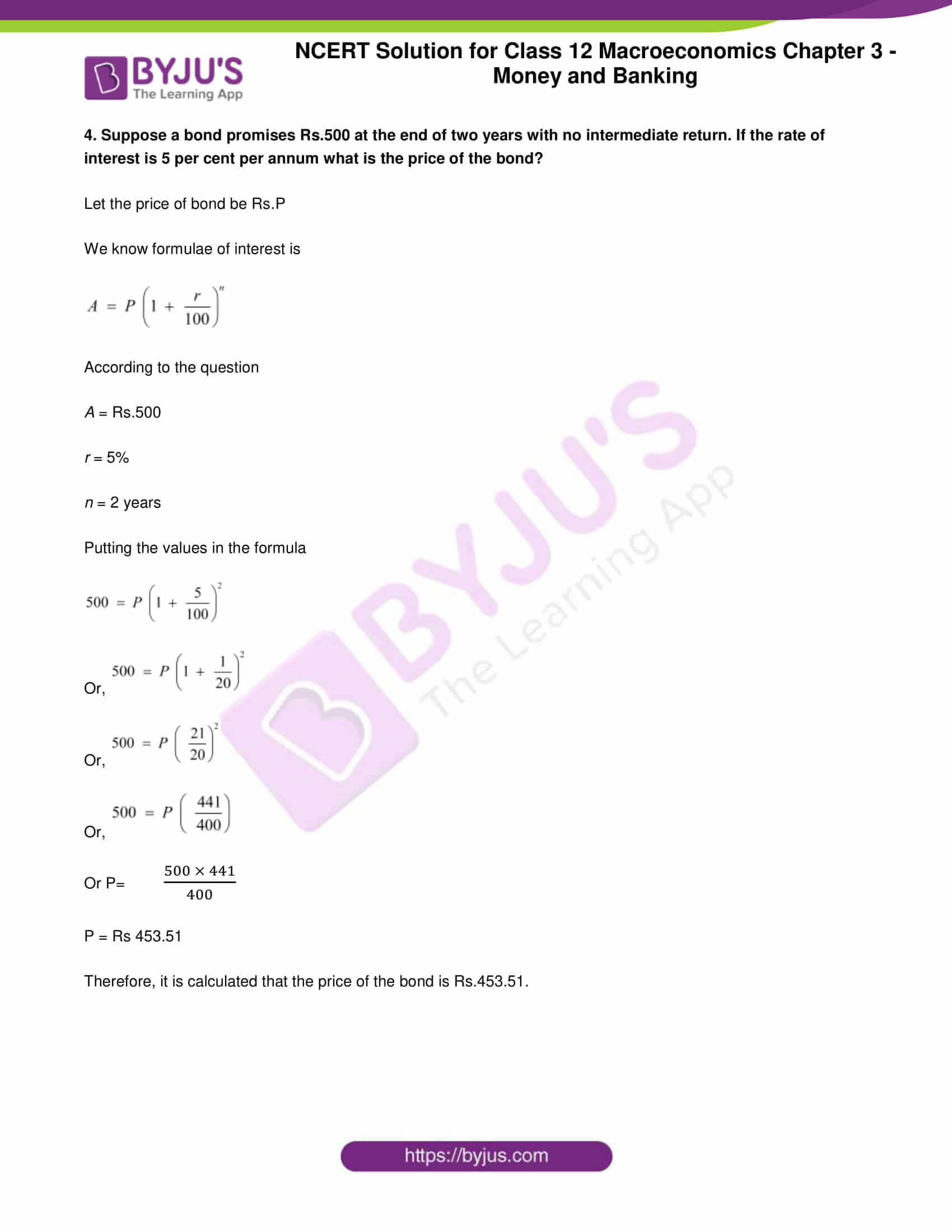 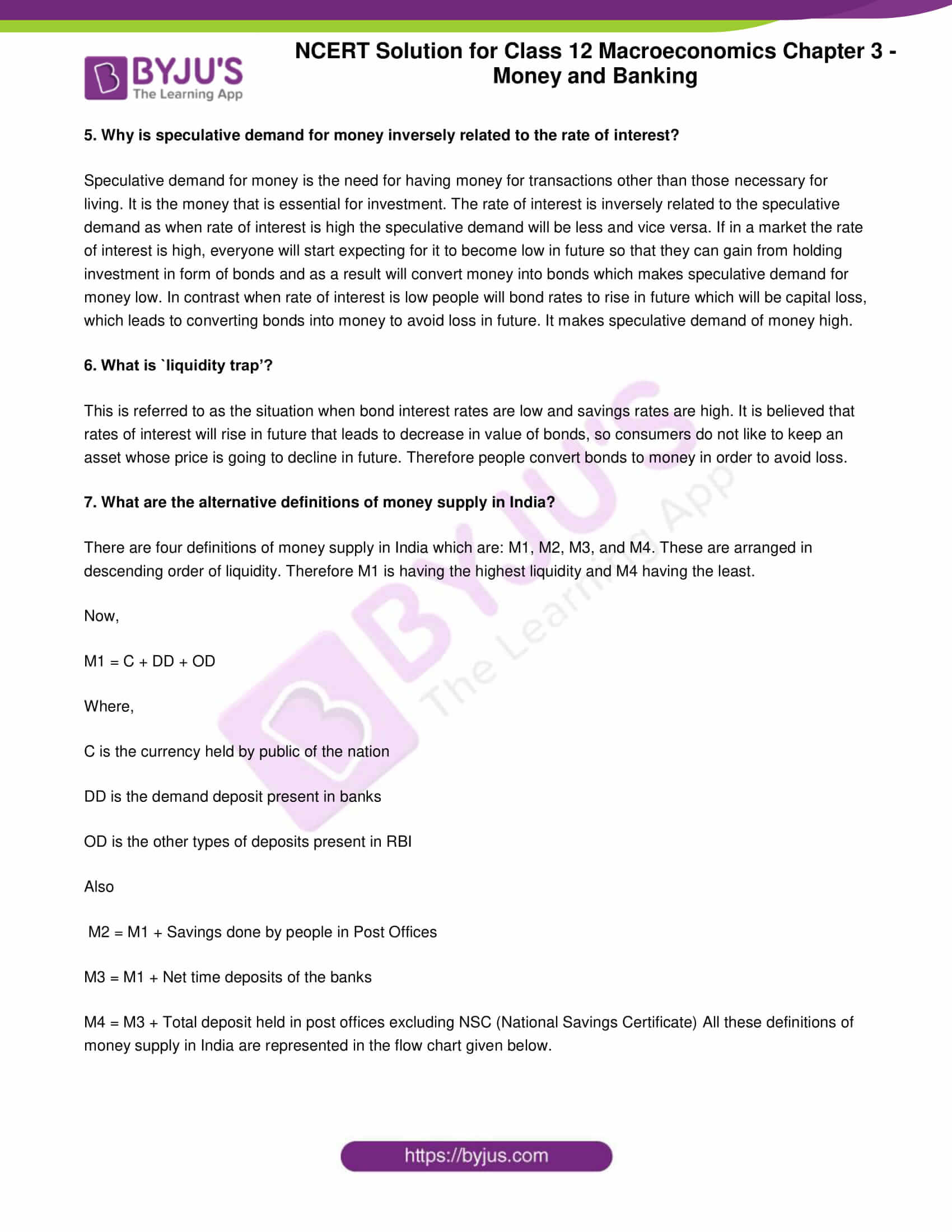 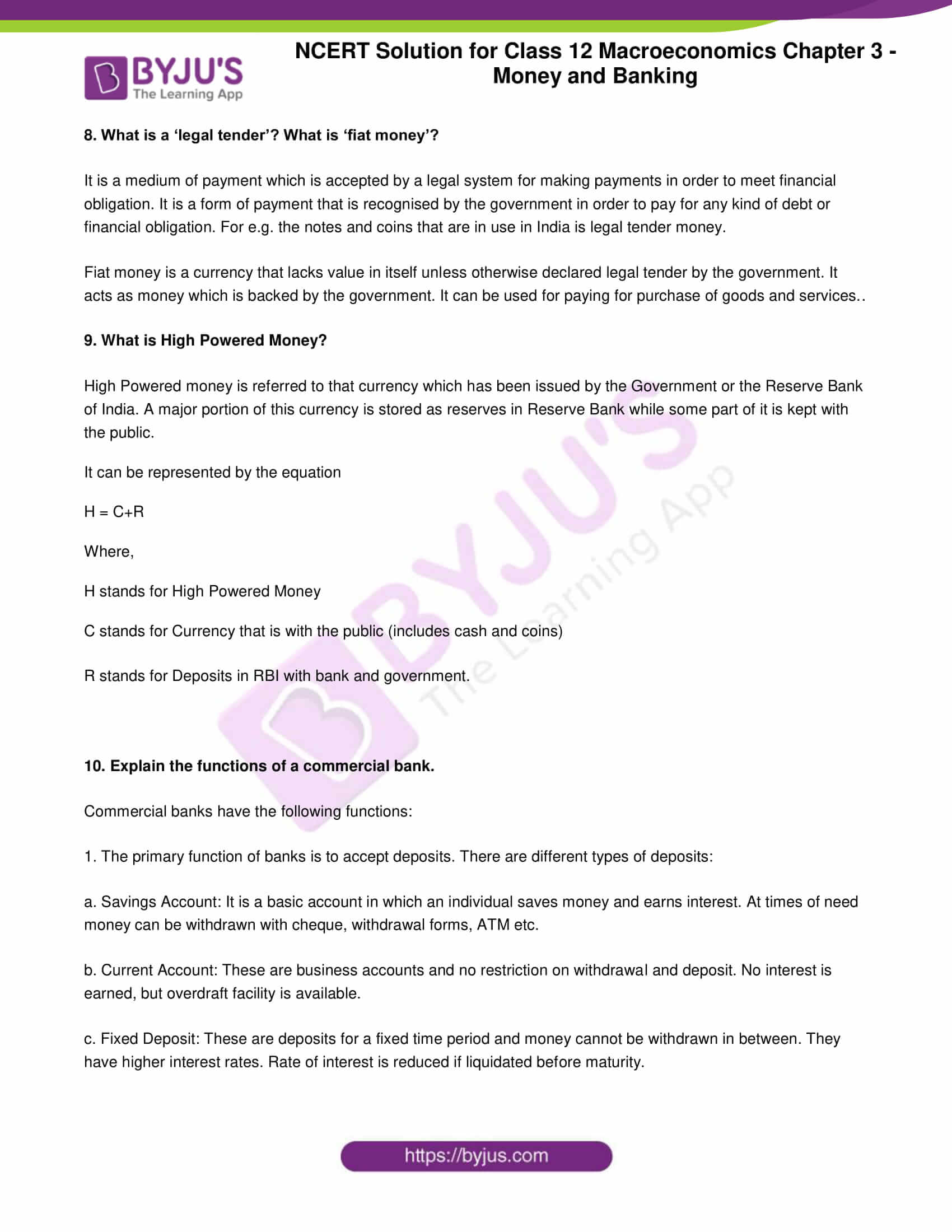 1. What is a barter system? What are its drawbacks?

Barter system is used in ancient times for exchanging goods. It was a system where one commodity was exchanged for another. Like we can say that a person has 1 kg of wheat and he wants to have 1 kg of rice in exchange for that, he can exchange the same if there is someone who is willing to exchange rice for wheat. It was called as commodity for commodity exchange. Later it was replaced by monetary system. The drawbacks of the barter system are:

1. It suffered from the double coincidence of wants that means two individuals should be complementing each other in their requirement in order for the exchange to happen. For e.g wheat for rice.

2. There was lack of common measurement i.e. value of good of one item was not always equal to the other item being exchanged for. For e.g exchange of rice for cow.

3. It was difficult to store the items that were obtained from exchange for future exchanges, as many items perished.

4. It was difficult to make future payments and contractual payments.

2. What are the main functions of money? How does money overcome the shortcomings of a barter system?

Money had the following functions:

Primary functions are as follows:

a. Money served as the medium of exchange and facilitated buying and selling of goods and services. The exchange was simple and could be scaled accordingly.

Secondary functions are as follows:

a. Money could be easily stored as compared to the goods that were received in exchange in a barter system. So it acted as a store of value.

b. Deferred payments have become much easier with introduction of money. Loans can be repaid in a much better way as compared to barter system.

It overcame the following shortcomings of barter system:

1. It eliminated the double coincidence of wants which was the most important shortcoming in barter system.

2. It overcame the problem of valuation of goods. In barter system goods exchanged were not proper in value with each other.

3. It facilitated contractual payments and future payments that were not possible in barter system.

4. It was easy to store money than perishable goods as was provided in barter system.

3. What is transaction demand for money? How is it related to the value of transactions over a specified period of time?

It is the amount of money that is essential for performing every day transactions. It is also called that amount that everyone save in order to finance the expenditures in future. There are two motives for holding transaction money. The income motive is for those who want to meet expenditures of household and business motive for businessman needing money for running business.

Relation between transaction demand and value of transactions is as follows: V = 1/K which represents velocity of circulation of money

T= Total transaction value over time in an economy

4. Suppose a bond promises Rs.500 at the end of two years with no intermediate return. If the rate of interest is 5 per cent per annum what is the price of the bond?

Let the price of bond be Rs.P

We know formulae of interest is

According to the question

Putting the values in the formula

Therefore, it is calculated that the price of the bond is Rs.453.51.

5. Why is speculative demand for money inversely related to the rate of interest?

This is referred to as the situation when bond interest rates are low and savings rates are high. It is believed that rates of interest will rise in future that leads to decrease in value of bonds, so consumers do not like to keep an asset whose price is going to decline in future. Therefore people convert bonds to money in order to avoid loss.

7. What are the alternative definitions of money supply in India?

There are four definitions of money supply in India which are: M1, M2, M3, and M4. These are arranged in descending order of liquidity. Therefore M1 is having the highest liquidity and M4 having the least.

C is the currency held by public of the nation

DD is the demand deposit present in banks

OD is the other types of deposits present in RBI

M4 = M3 + Total deposit held in post offices excluding NSC (National Savings Certificate) All these definitions of money supply in India are represented in the flow chart given below.

9. What is High Powered Money?

High Powered money is referred to that currency which has been issued by the Government or the Reserve Bank of India. A major portion of this currency is stored as reserves in Reserve Bank while some part of it is kept with the public.

It can be represented by the equation

R stands for Deposits in RBI with bank and government.

10. Explain the functions of a commercial bank.

Commercial banks have the following functions:

1. The primary function of banks is to accept deposits. There are different types of deposits:

a. Savings Account: It is a basic account in which an individual saves money and earns interest. At times of need money can be withdrawn with cheque, withdrawal forms, ATM etc.

b. Current Account: These are business accounts and no restriction on withdrawal and deposit. No interest is earned, but overdraft facility is available.

c. Fixed Deposit: These are deposits for a fixed time period and money cannot be withdrawn in between. They have higher interest rates. Rate of interest is reduced if liquidated before maturity.

2. Banks provide loans and loan advances for various purposes. Loans can be of short or long term and have higher rate of interest.

a. Banks provide fund transfer facility through internet or other banking instruments.

b. Banks collect money for customers in form of cheque or bills.

4. Provides financial assistance to businesses by discounting the bills of exchange. This is done by purchasing of bills produced by customers and deducting interest from face value of the bill.

5. Banks create credit in the economy in the form of demand deposits. It helps in growth of an economy.

Money multiplier is that amount of money that banks create as deposits with each a unit of money it is keeping as reserve. It is determined as the ratio of total money supply by the stock of high powered money in the economy.

Where, MM is the money multiplier

12. What are the instruments of monetary policy of RBI? How does RBI stabilize money supply against exogenous shocks?

The qualitative measures include the following components:

a. Marginal Requirements: The grant of loan by the commercial banks is on the basis of value of security that is kept as mortgage. Banks always maintain a margin of difference between the market value of security that is mortgaged and the loan value. When the central bank restricts the money flow it results in raise of marginal requirement of loan and vice versa in the case of credit policy.

c. Moral Suasion: It refers to a type of persuasion technique which is applied by Central Banks to keep pressure on commercial banks in order to abide by the monetary policies that are defined. It is carried out by conducting speeches, seminars and meetings.

The quantitative measures are as follows:

a. Bank Rate: The rate at which a central bank for e.g RBI provides loan to the commercial banks is called as bank rate. If there is an increase in bank rate it will make the loans dearer for commercial banks which will increase the rate of lending thereby reducing capacity of public to take credit. The opposite happens in case of decrease in bank rate leading to easy access to credit.

c. Variable reserve ratios: There are two types of ratios that are used by RBI in order to regulate the supply of money. These are Statutory Liquid Ratio (SLR) and Cash Reserve Ratio (CRR). SLR deals with the minimum percentage of asset that needs to be maintained with RBI in the form of fixed or liquid assets. When SLR increases flow of liquidity decreases and vice-versa. CRR deals with the minimum amount of fund that needs to be maintained with the RBI. Change in the value of CRR has an impact on economy. If CRR is increased it will result in less money available for lending while the opposite happens if CRR decreases.

At times when foreign currency enters India in form of bond purchases by foreigners by exchanging foreign currency for rupees, the currency thus collected will be deposited by commercial bank to RBI which experiences a raise in liabilities and assets. To counter such a situation RBI sells securities in an open market in order to protect enemy against shocks.

13. Do you consider a commercial bank ‘creator of money’ in the economy’?

Commercial banks primary role is money creation or credit creation in an economy. This is based on the assumption that not all the depositors will withdraw all their deposits at once from the bank. By this way the money can be used to provide credit to others and hence generate credit through demand deposits.

14. What role of RBI is known as ‘lender of last resort’?

Any commercial bank which is facing financial crisis and needs to obtain funds for functioning seeks the help of central bank of the country. In India RBI (Reserve Bank of India) is the central bank and it provides assistance to those banks in the form of credit thereby saving them from getting bankrupt. Therefore by acting as a guarantor for commercial banks, the central bank (RBI) maintains a sound and healthy system of banking in the economy.