NCERT Solutions are contemplated as an exceptionally helpful book while preparing for the CBSE Class 12 Economics examinations. This study resource possesses an intense knowledge and the Solutions collated by the subject matter experts are no different. 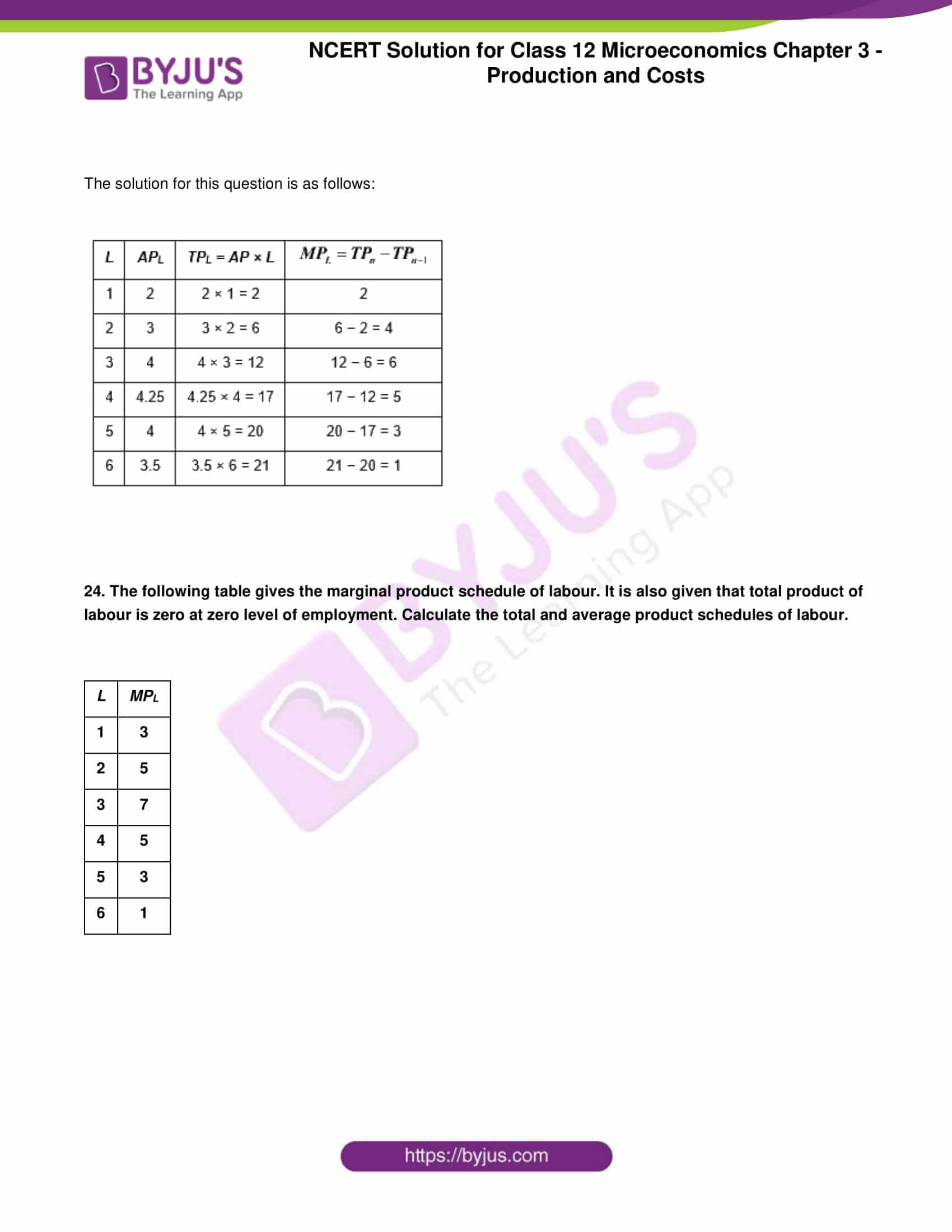 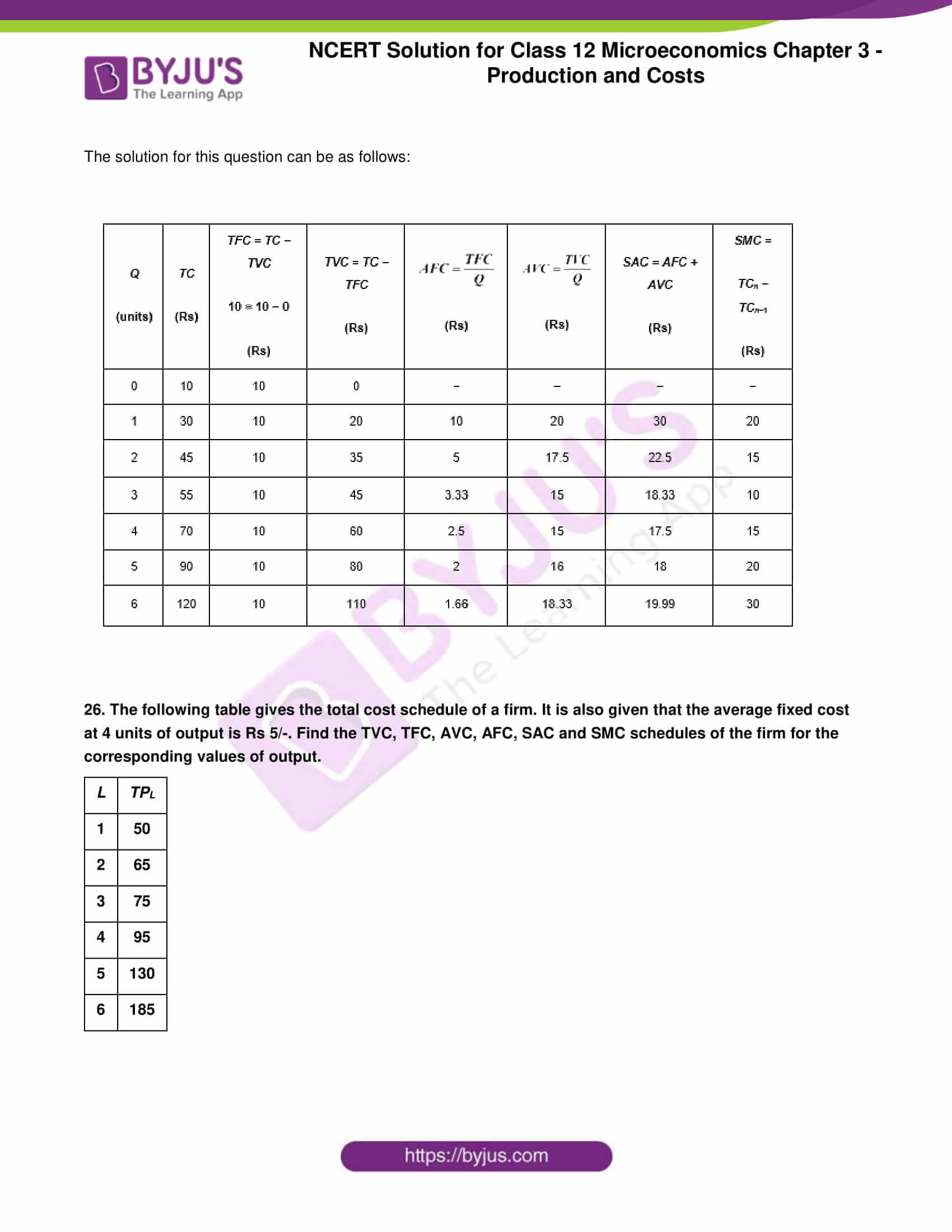 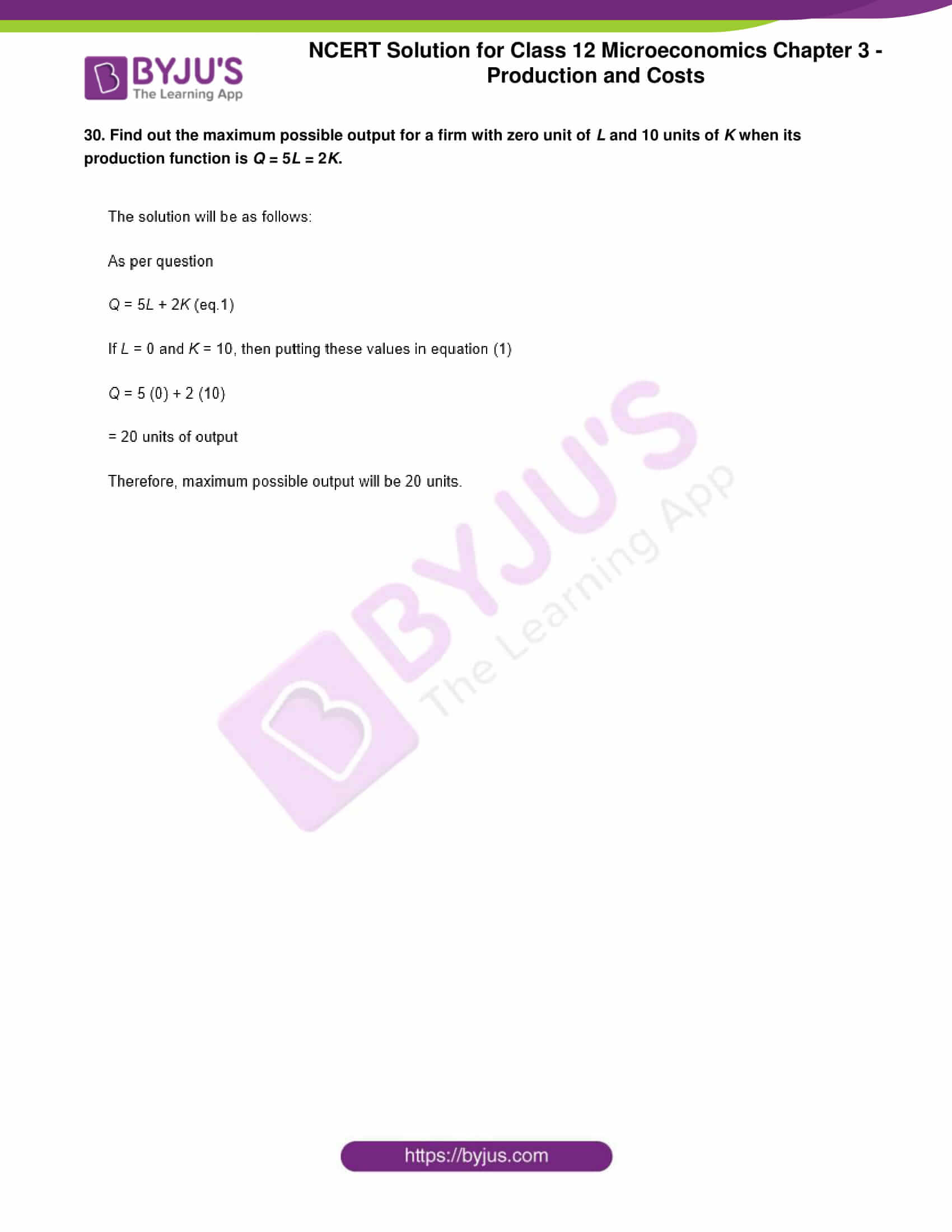 1. Explain the concept of a production function.

Production function is a function that defines the relationship between physical inputs used in the production and the corresponding physical output. This shows how many units of inputs produce the maximum output. It can be represented as:

2. What is the total product of input?

It refers to total volume of goods and services that are produced in a firm with the provided input during a specific time period.

3. What is the average product of an input?

The Average Product of an input is the Total Product divided by the total amount of the variable input used to produce it.

4. What is the marginal product of an input?

The marginal product of an input is the improvement in output that is achieved by using an additional unit of an input.

5. Explain the relationship between the marginal products and the total product of an input.

This can be explained with the help of law of variable proportions. As per this law when only one variable factor input is allowed to increase with all other inputs kept constant, these changes are observed:

1. With increase in Marginal Product (MP), there is a corresponding increase in Total Product (TP). A convex curve is obtained with the effect till the MP curve is at its maximum.

2. When MP declines but is positive, then TP increases with a decline in rate, giving total product a concave shape. 6. Explain the concepts of the short run and the long run.

7. What is the law of diminishing marginal product?

According to the law of diminishing marginal product, there will initially be an increase in the total amount of production when one of the factors is increased while keeping the others constant.

8. What is the law of variable proportions?

The Law of Variable Proportions is also called the Law of Diminishing Returns.

According to the law, when one of the inputs involved in the production is changed while keeping the other inputs constant, there will be a point after which the output per unit of that input will start to decrease. This law is theorised under certain assumptions.

i) The technology should remain the same.

ii) The possibility that the factors of production can be changed within a short period of time.

iii) Some inputs should be kept constant

9. When does a production function satisfy constant returns to scale?

Constant returns to scale is achieved when the change in the factors of production matches with the changes in the total output. This means that the efforts of the producer to improve the production are yielding appropriate and equivalent returns.

10. When does a production function satisfy increasing returns to scale?

Increasing returns to scale is achieved when the change in the factors of production yields more than the proportionate changes in the total output. This means that the company has improved its productivity.

11. When does a production function satisfy decreasing returns to scale?

Decreasing returns to scale is when the change in the factors of production results in a decrease in the changes in the total output. This is an indication that the changes have proved to be detrimental to productivity instead of increasing productivity

12. Briefly explain the concept of the cost function.

The relationship between cost of production and total output is known as cost function.

13. What are the total fixed cost, total variable cost and total cost of a firm? How are they related?

Total Fixed Cost: The cost incurred by a company in acquiring fixed production factors like buildings, cost of machinery and depreciation.

Total Cost: The total cost of the firm is the total fixed cost and total variable cost put together. It is the actual cost incurred by the company when producing a given amount of output.

14. What are the average fixed cost, average variable cost and average cost of a firm? How are they related?

The average cost of a firm is the average fixed cost and average variable cost put together.

16. What does the average fixed cost curve look like? Why does it look so?

The average fixed cost resembles a rectangular hyperbola. This is because of the constantly increasing output and the fixed cost which remains the same at every point.

17. What do the short-run marginal cost, average variable cost and short-run average cost curves look like?

The curves of short-run marginal cost, the average variable cost and the short-run average cost all U-shaped.

It can be explained by following points:

3. When AVC is constant and is minimum, SMC is equal to AVC.

19. At which point does the SMC curve intersect SAC curve? Give reason in support of your answer.

This can be explained with the following points:

1. When SAC falls, SMC is below the SAC

2. When SAC rises, SMC is above SAC

20. Why is the short run marginal cost curve ‘U’-shaped? This can be explained as follows:

2. As TVC increases at a diminishing rate, the total product increases at increasing rate, which creates gap in curve leading to fall of MC.

3. Now as TVC increases at an increasing rate and the total product increases at diminishing rate, making the marginal cost to increase and rise upward.

21. What do the long run marginal cost and the average cost curves look like?

The Long Run Marginal Cost (LMC) and Long Run Average Cost (LAC) are U-shaped and the reason behind this is the law of returns to scale. As per this law a company or a firm undergoes three stages in production which are IRS (Increasing Return to Scale), CRS (Constant Return to Scale) and DRS (Diminishing Return to Scale). The curve becomes U-Shaped due to falling of LAC due to economies of scale (IRS), it attains constant output at CRS level and finally if the firm will experience diseconomies of scale and if it is continuing production after this stage it will see a rise or DRS. 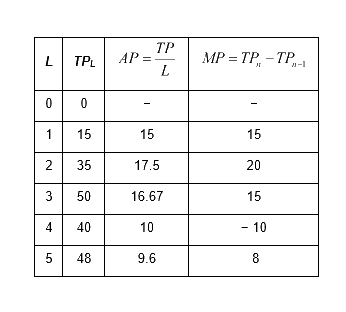 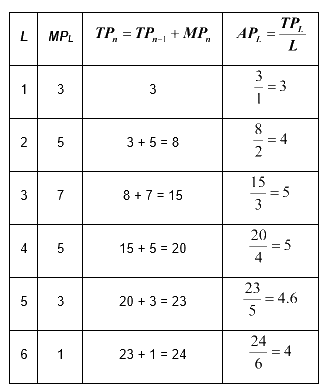 Calculate the TVC, AFC, AVC, SAC and SMC schedules of the firm.

The solution for this question can be as follows: 26. The following table gives the total cost schedule of a firm. It is also given that the average fixed cost at 4 units of output is Rs 5/-. Find the TVC, TFC, AVC, AFC, SAC and SMC schedules of the firm for the corresponding values of output. 27. A firm’s SMC schedule is shown in the following table. The total fixed cost of the firm is Rs 100. Find the TVC, TC, AVC and SAC schedules of the firm. 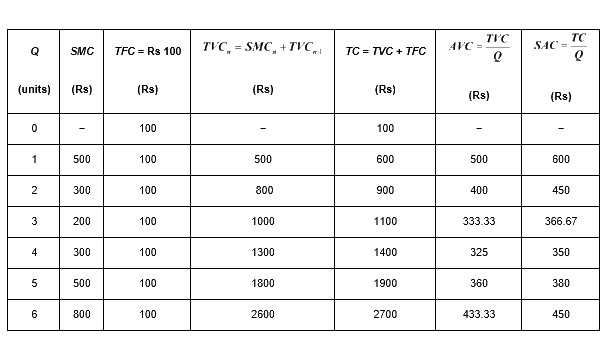 28. Let the production function of a firm be

The solution is as follows: 30. Find out the maximum possible output for a firm with zero unit of L and 10 units of K when its production function is Q = 5L = 2K. NCERT Solution for Class 12 Economics Chapter 3 – Production and Costs gives a brief presentation of the concept. This can be termed as  – ‘Theory of production – Cost Theory’ as well. In the Cost Theory, there are 2 types of costs analogous to production – Fixed Cost and Variable Cost.