The title is self-explanatory in the terms that this chapter is about an alien. But, are we talking about the alien on Earth or on some other planet? A story that keeps you wondering what’s next, An Alien Hand is linked to the Viking Mission to Mars that was composed of two spacecraft, Viking 1 and Viking 2. To download these NCERT Solutions for Class 7 English in PDF format, click on the link provided below. 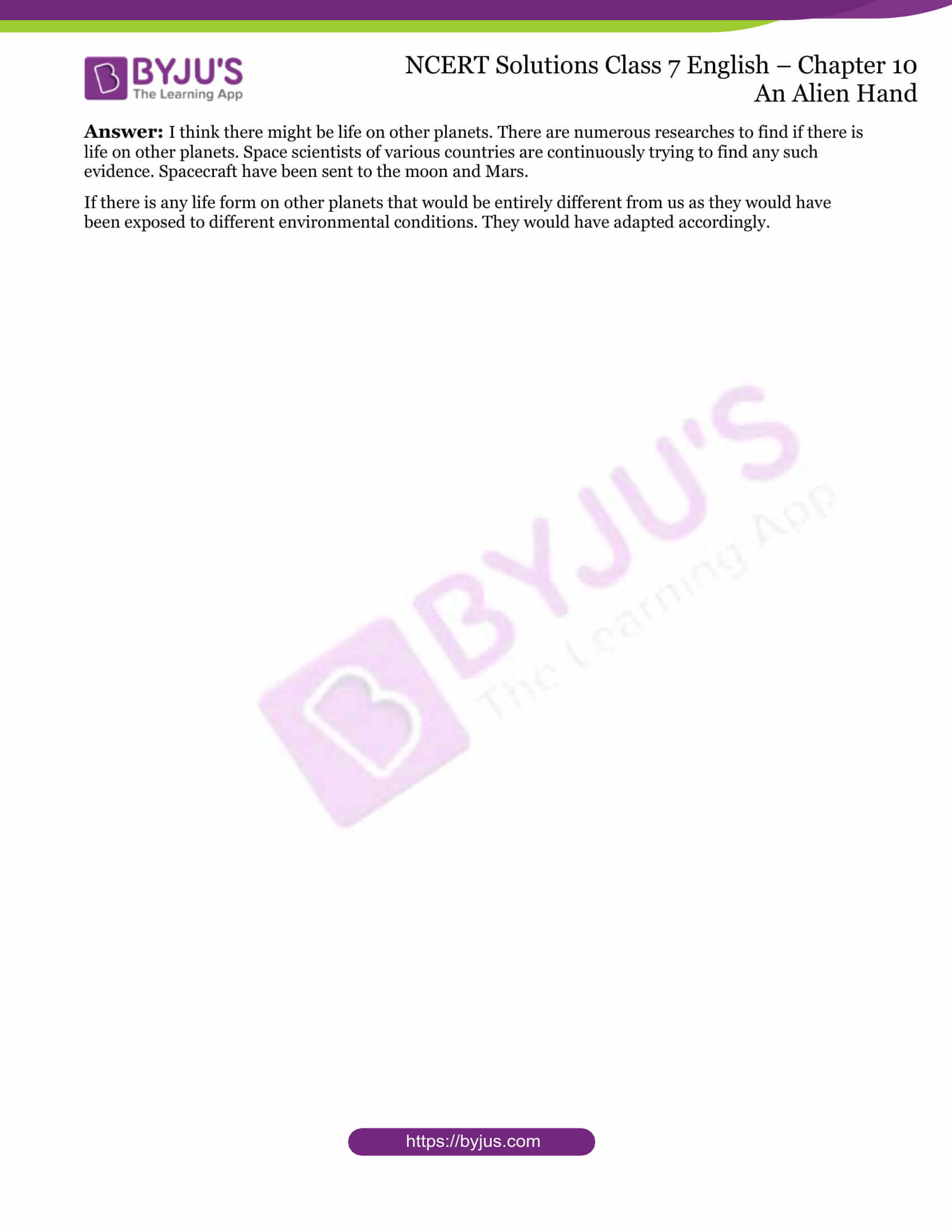 Question 1. How does Tilloo manage to find his way to the ‘forbidden passage’?

Answer: Tilloo managed to find his way to the ‘forbidden passage’ one day while his father was taking a nap. He used his father’s security card to enter the passage.

Question 2. What did Tilloo hope to see once he emerged from his underground home?

Answer: Tilloo had hoped that he would be able to see the sun (if it was day) or stars (if it was night) once he emerged from his underground home.

Question 3. Why did Tilloo’s father advise him not to try to reach the surface of the planet?

Answer: Tilloo’s father advised him not to try to reach the surface of the planet because the surface had very thin air, which was hard to breathe and it had a very low temperature, which Tilloo would not be able to withstand.

Question 4. What changes had occurred, which forced people to live in underground homes?

Answer: The sun became way too cold and hostile. The birds became extinct. Then the animals and fish followed too. The air grew thinner and the temperature fell extremely low. These were the changes that occurred which forced people to live in underground houses.

Question 1. Why was everyone in the Control Room greatly excited?

Answer: Everyone in the Control Room was greatly excited because they got to know that two spacecrafts were approaching their planet.

Question 2. Was the spacecraft manned or unmanned? How do you know it?

Answer: As per the reports of the Central Bureau, the spacecraft was unmanned. It only had instruments.

Question 3. What did Number One and Number Two suggest should be done about the alien spacecraft?

Answer: Number One suggested that they should let the spacecraft land and then it would be easy for them to make it ineffective.

Number Two suggested that they just wait and watch as it would not be wise to reveal about their existence. Fortunately, the surface of their planet gave no signs of life anyway.

Question 1. What do you think the mechanical hand was trying to do?

Answer: The mechanical hand was trying to collect soil samples of Mars in order to understand if there was life on the planet.

Question 2. Tilloo pressed the red button and “the damage was done”. What was the damage?

Answer: The damage was that due to the press of the red button, the mechanical hand stopped working and it became inactive.

Question 3. Where had the spacecraft come from?

Answer: The spacecraft had come from the planet Earth.

Question 4. On which planet do Tilloo and his parents live?

Answer: Tilloo and his parents lived underground on the planet Mars.

Question 1. If you had to live in a home like Tilloo’s, what parts of life would you find most difficult? What compensations might there be?

Answer: The parts of life that I would find most difficult are that there would be no fresh air to breathe, no stars or sun or moon in the sky, no rain, no winter, no summer, no animals, no plants and no natural environment. It would be so dull and artificial.

The compensation that might be there would be the controlled temperature and air.

Question 2. What, if anything, might drive mankind to make their homes underground?

Answer: If the conditions on the surface of the planet are not good enough to survive, mankind might get driven to make their homes underground.

Question 3. Do you think there is life on other planets? Can you guess what kind of people there may be on them? In what ways are they likely to be different from us?

If there is any life form on other planets that would be entirely different from us as they would have been exposed to different environmental conditions. They would have adapted accordingly.

Who is Tilloo and where were he and his family living as in Chapter 10 of NCERT Solutions for Class 7 English Supplementary?

Tilloo is a curious young boy. Tilloo and his parents lived beneath the surface of a planet under artificial conditions. Tilloo has heard and read about the sun and the stars but has never seen them in real.

Why did Tilloo and his family live under the surface of a planet as mentioned in Chapter 10 of NCERT Solutions for Class 7 English Supplementary?

The very sun, which had provided with sustenance millions of years ago, turned hostile. It changed only slightly, but the change was adequate to upset the balance of nature on the planet. The birds became extinct first, then the animals. Even the fishes couldn’t bear it anymore either. People managed to survive only because of superior technology and were forced to live underground under artificial conditions for existence.

What was the work of Tilloo’s father and what does he wear to work as discussed in Chapter 10 of NCERT Solutions for Class 7 English Supplementary?

Solar energy was the only comfortable mode of generating power for survival. Machines that make that possible must always be in good working condition. Tilloo’s father belonged to the team whose responsibility was to keep watch on them and service them timely. Tilloo’s father goes well-equipped, in a special suit with a reservoir of oxygen for work at the surface.