“I want something in a cage”, a peculiar title for a chapter. It is about a shopkeeper who owns a shop with birds, monkeys, etc. He has a weird encounter with a strange man who comes into his shop. He wants to buy something in a cage. That’s such a unique demand. Is the shopkeeper able to fulfil the stranger’s wish? Read the entire story in your textbook.

Download these NCERT Solutions for Class 7 English in PDF format through the link provided below and enjoy learning anywhere, anytime! 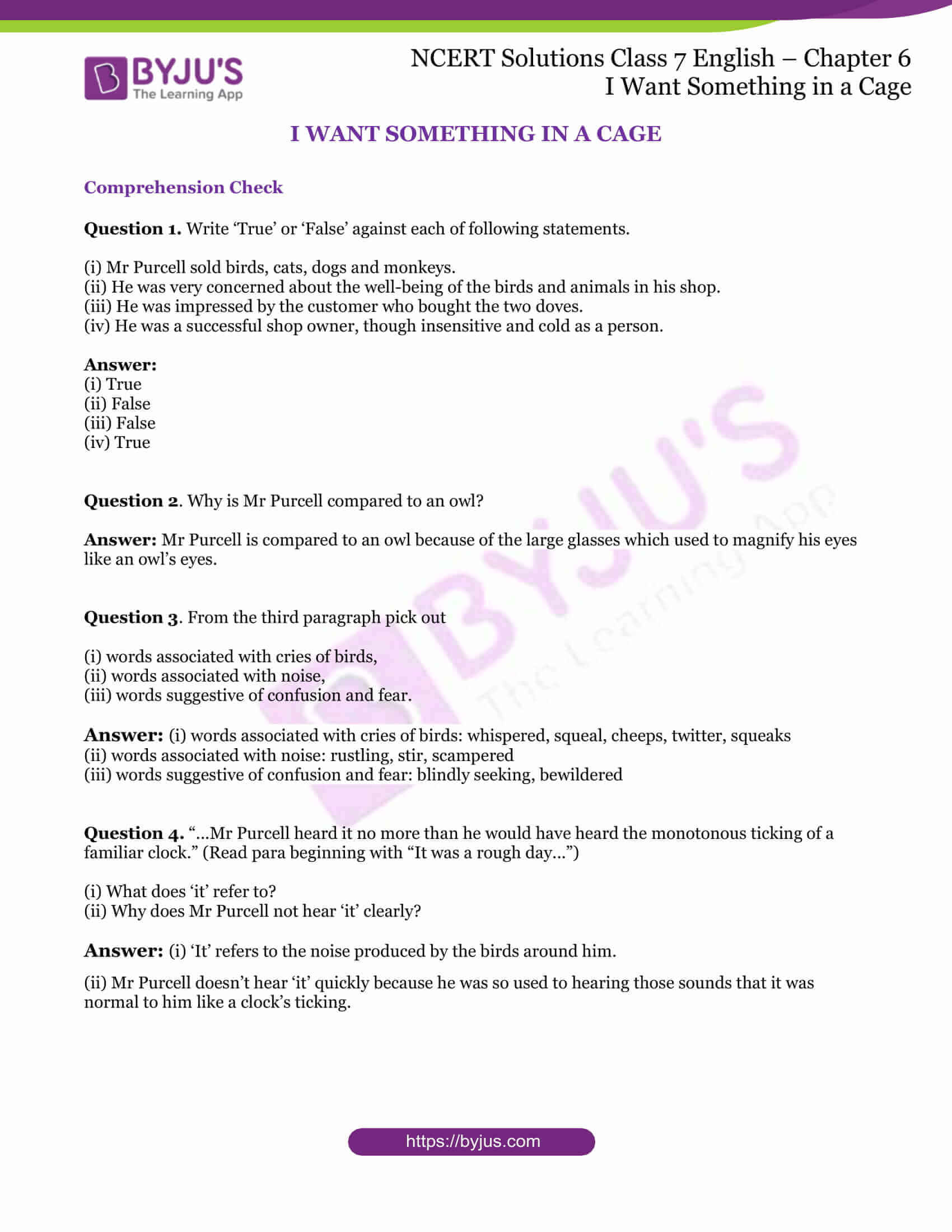 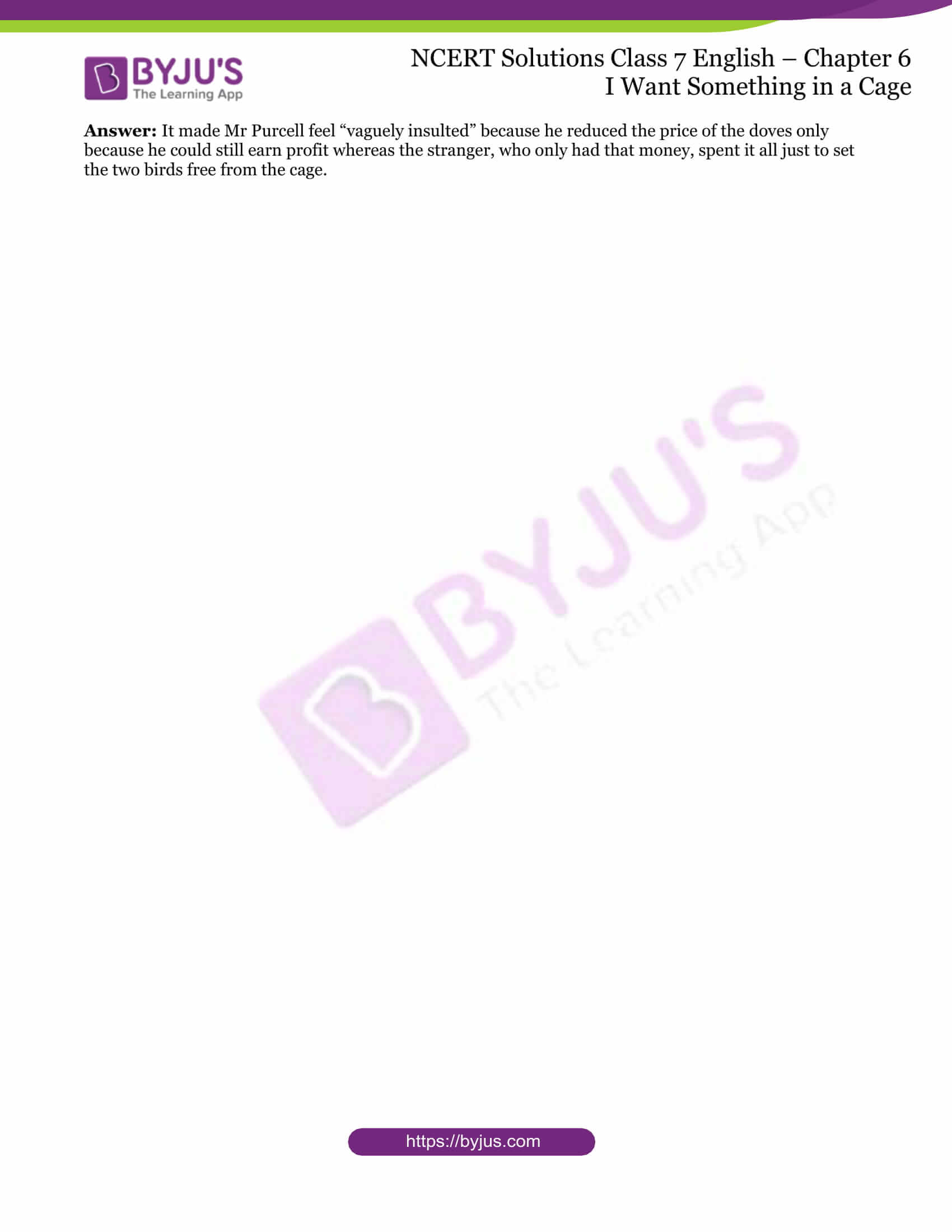 I WANT SOMETHING IN A CAGE

I Want Something in a Cage

Question 1. Write ‘True’ or ‘False’ against each of following statements.

(ii) He was very concerned about the well-being of the birds and animals in his shop.

(iii) He was impressed by the customer who bought the two doves.

(iv) He was a successful shop owner, though insensitive and cold as a person.

Question 2. Why is Mr Purcell compared to an owl?

Answer: Mr Purcell is compared to an owl because of the large glasses which magnified his eyes like an owl’s eyes.

Question 3. From the third paragraph pick out

(i) words associated with cries of birds,

Question 4. “…Mr Purcell heard it no more than he would have heard the monotonous ticking of a familiar clock.” (Read para beginning with “It was a rough day…”)

(ii) Why does Mr Purcell not hear ‘it’ clearly?

Answer: (i) ‘It’ refers to the noise produced by the birds around him.

(ii) Mr Purcell doesn’t hear ‘it’ clearly because he was so used to hearing those sounds that it was normal to him like a clock’s ticking.

Question 1. Do you think the atmosphere of Mr Purcell’s shop was cheerful or depressing? Give reasons for your answer.

Answer: I think the atmosphere of Mr Purcell’s shop was depressing. It was lifeless. It was full of the strange sounds made by the birds chirping and moving. Mr Purcell was used to the sound but the customers used to wonder how he put up with such disturbing noises.

Question 2. Describe the stranger who came to the pet shop. What did he want?

Answer: The stranger who came to the shop was wearing a cheap new suit. He was a prisoner earlier. He came to Mr Purcell’s shop and asked for “something in a cage”. He wasn’t clear about what he exactly wanted but said it should have wings and should be in a cage.

Question 3. (i) The man insisted on buying the doves because he was fond of birds. Do you agree?

(ii) How had he earned the five dollars he had?

Answer: (i) No, the man insisted on buying the doves not because he was fond of birds. He just wanted birds in a cage.

(ii) He had earned five dollars he had in a prison where he had to work very hard. He used to get only 50 cents per year.

Question 4. Was the customer interested in the care and feeding of the doves he had bought? If not, why not?

Answer: No, the customer was not interested in the care and feeding of the doves he had bought because he did not want to actually keep them as pets. He did not even listen to what Mr Purcell was saying about feeding the doves. He spent his hard-earned money on the doves just to set them free from their cages.

Question 1. Why, in your opinion, did the man set the doves free?

Answer: The man set the doves free because being a prisoner earlier, he understood what it feels like to be caged. He knew the value of freedom. He spent all his 10 years’ hard-earned money on buying two doves and then he set them free into the sky.

Question 2. Why did it make Mr Purcell feel “vaguely insulted”?

Answer: It made Mr Purcell feel “vaguely insulted” because he reduced the price of the doves only because he could still earn profit whereas the stranger, who only had that money, spent it all just to set the two birds free from the cage.

BYJU’S provides NCERT Solutions for Class 7 English Supplementary Chapter 6 section wise. Other study materials like previous year question papers and sample papers are also available with accurate answers. Highly experienced subject matter experts prepare the solutions to help students attain remarkable grades in the final exam. The solutions are drafted in such a way to solve the doubts which arise in the minds of students, while studying the chapter. The knowledgeable educators provide students with detailed answers to boost their exam preparation.

In Chapter 6 of NCERT Solutions for Class 7 English Supplementary, Mr Purcell was a small and fussy man with red cheeks and a tight, melon stomach. Large glasses magnified his eyes to give him the appearance of a wise and genial owl. Mr Purcell owned a pet shop that sold cats, dogs and monkeys. He dealt in fish food and bird seed, prescribed remedies for ailing canaries, and displayed long rows of ornate and gilded cages on his shelves.

What does Mr Purcell do each morning as described in Chapter 6 of NCERT Solutions for Class 7 English Supplementary?

Each morning, Mr Purcell had a routine of opening his shop. Post completion, it was the proprietor’s custom to perch on a high stool behind the counter, unfold his morning paper, and digest the day’s news. For more accurate NCERT Solutions for Class 7 English Supplementary Chapter 6, the experts at BYJU’S have provided the PDF version which can be accessed by the students without any limitations.

What is the main concept in Chapter 6 of NCERT Solutions for Class 7 English Supplementary?

In Chapter 6 of NCERT Solutions for Class 7 English Supplementary, students will read about a shopkeeper named Purcell, who owns a pet shop that sells birds, dogs, cats etc. One day, he has a weird encounter with a strange man who comes into his shop. He wants to buy something in a cage. The strange man desired doves, and the shopkeeper let him have them at a reduced price. Soon after the strange man bought them, he had turned them loose.