Here, we have provided the NCERT Solutions for Class 7 English Chapter 8 The Bear Story, with all the questions of the English supplementary reader An Alien Hand. These NCERT Solutions for Class 7 will help students in their preparation for the examination. These have been crafted by our subject-matter experts, so as to give the students the most standard solution to every question.

People are scared of bears. But in this story, the bear has been taken care of by a lady. He is an obedient, cheerful and vegetarian bear. He plays with dogs and obeys what his mistress says. He goes for walks with her. But that’s not all about it. There is a twist in the climax. Excited to know? Read the story in the textbook and find the solutions here.

Download these NCERT Solutions for Class 7 English in PDF format through the link provided below and enjoy learning anywhere, anytime! 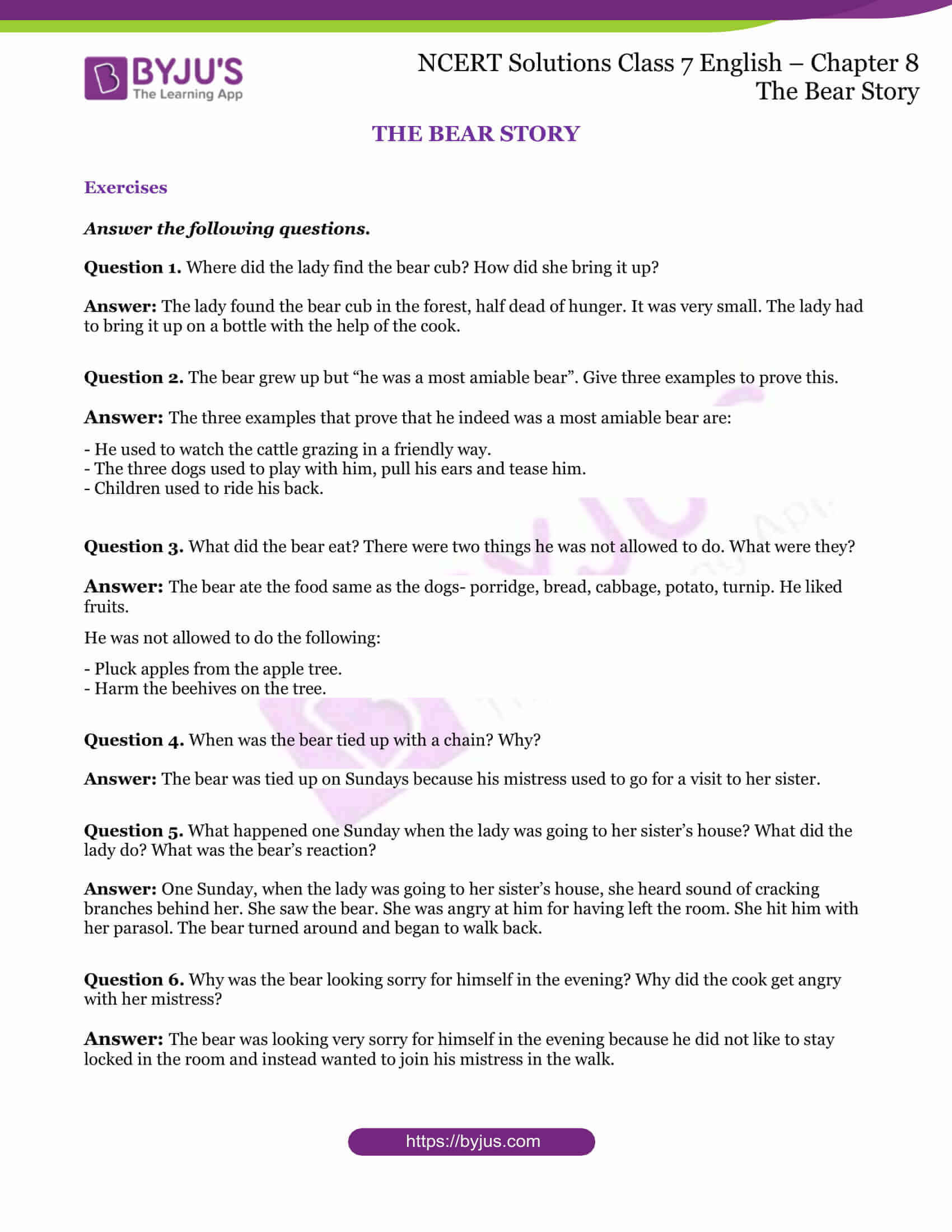 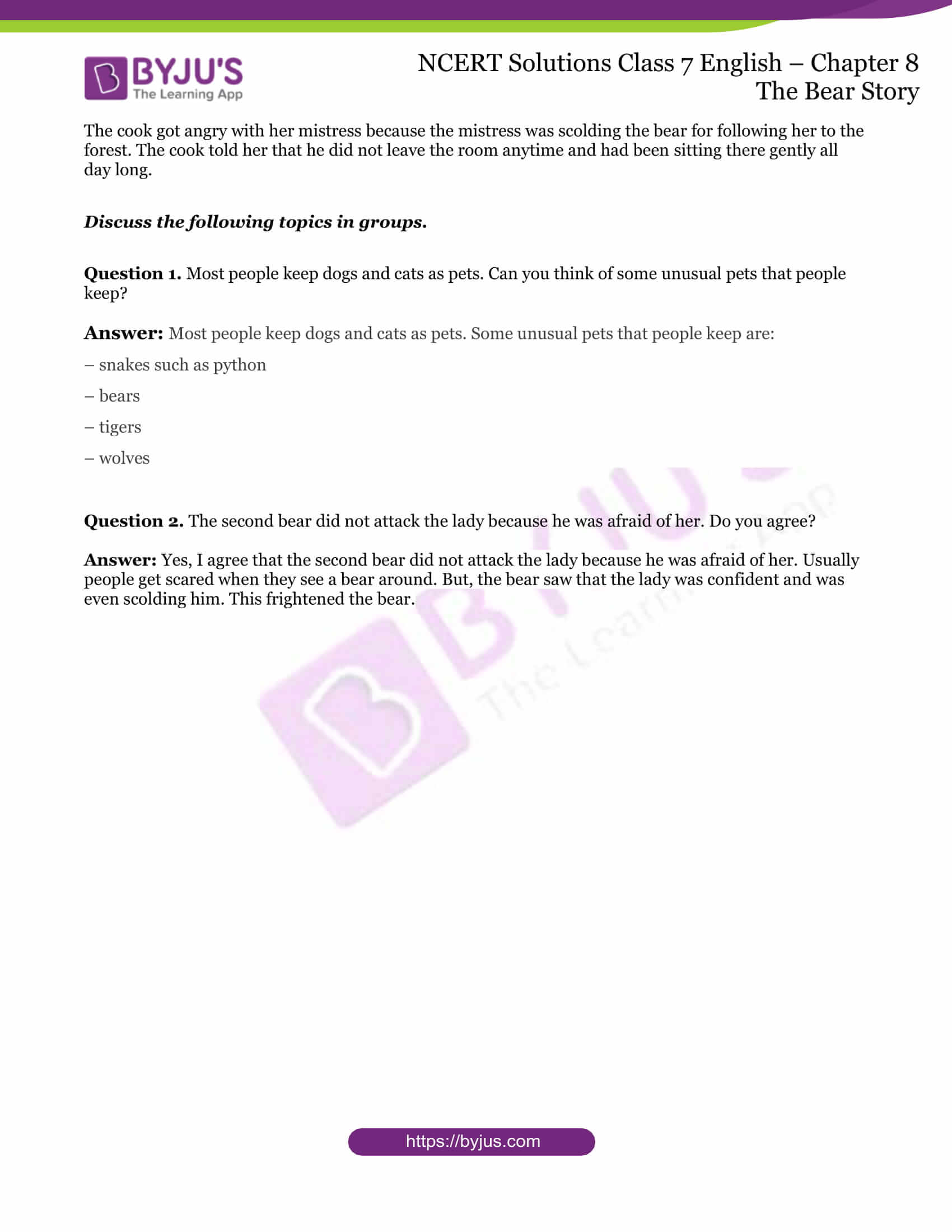 Question 1. Where did the lady find the bear cub? How did she bring it up?

Answer: The lady found the bear cub in the forest, half dead of hunger. It was very small. The lady had to bring it up on a bottle with the help of the cook.

Question 2. The bear grew up but “he was a most amiable bear”. Give three examples to prove this.

Answer: The three examples that prove that he indeed was a most amiable bear are:

Question 3. What did the bear eat? There were two things he was not allowed to do. What were they?

He was not allowed to do the following:

Question 4. When was the bear tied up with a chain? Why?

Answer: The bear was tied up on Sundays because his mistress used to go for a visit to her sister.

Question 5. What happened one Sunday when the lady was going to her sister’s house? What did the lady do? What was the bear’s reaction?

Answer: One Sunday, when the lady was going to her sister’s house, she heard sound of cracking branches behind her. She saw the bear. She was angry at him for having left the room. She hit him with her parasol. The bear turned around and began to walk back.

Question 6. Why was the bear looking sorry for himself in the evening? Why did the cook get angry with her mistress?

Answer: The bear was looking very sorry for himself in the evening because he did not like to stay locked in the room and instead wanted to join his mistress in the walk.

The cook got angry with her mistress because the mistress was scolding the bear for following her to the forest. The cook told her that he did not leave the room anytime and had been sitting there gently all day long.

Question 1. Most people keep dogs and cats as pets. Can you think of some unusual pets that people keep?

– snakes such as python

Question 2. The second bear did not attack the lady because he was afraid of her. Do you agree?

Answer: Yes, I agree that the second bear did not attack the lady because he was afraid of her. Usually, people get scared when they see a bear around. But, the bear saw that the lady was confident and was even scolding him. This frightened the bear.

What was the pet of the lady as in Chapter 8 of NCERT Solutions for Class 7 English Supplementary?

The pet of the lady who lived in an old manor-house on the border of a big forest was a bear. She is very fond of it. The bear was found in the forest, half dead of hunger, so small and helpless that it had to be brought up on the bottle by the lady and the old cook.

How did the three dogs play with the bear as described in Chapter 8 of NCERT Solutions for Class 7 English Supplementary?

The three dogs loved to play all sorts of games with the bear by pulling his ears and his stump of a tail and by teasing him in every way. But the bear did not mind all this in the least. All of them ate the same food and often on the same plate too.

Where does the lady go on every Sunday as mentioned in Chapter 8 of NCERT Solutions for Class 7 English Supplementary?

The lady visited her sister every Sunday. Whenever she goes for the visit, she leaves the bear on the chain for the whole afternoon. One Sunday, while walking through the dense forest, she found him following her. She was so angry with the disobedient bear that she hit him on the nose with her umbrella.