The chapter “A Tiger in the House” by Ruskin Bond is a beautiful story of a tiger, Timothy. Timothy is found near the intricate roots of a banyan tree by Grandfather. Then on, he becomes a part of Grandfather’s family. The story progresses through Timothy’s journey as a cub to becoming an adult tiger. Students can also download these NCERT Solutions for Class 7 English in PDF format through the link provided below. 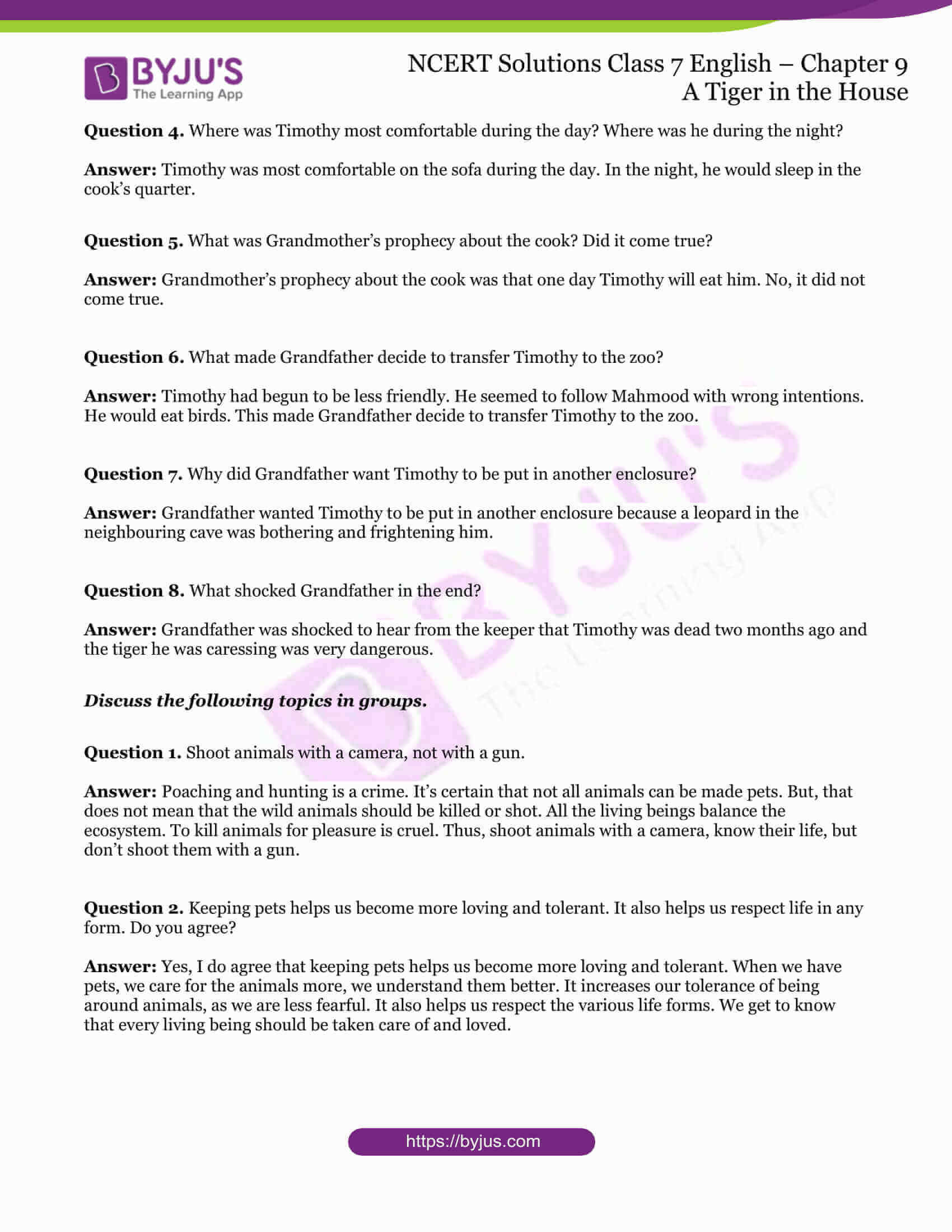 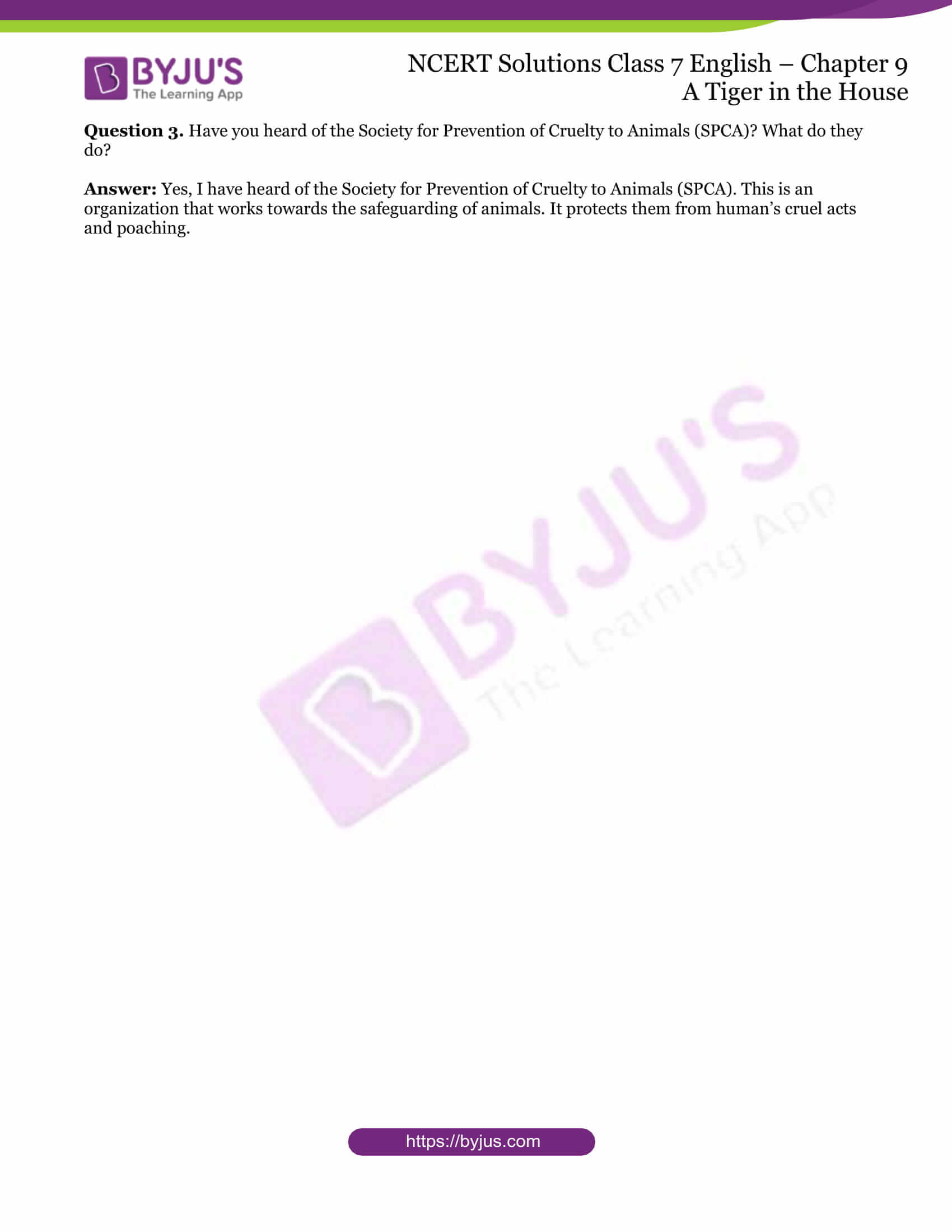 Question 1. “He had the distinction of being the only member of the party to have bagged any game…”

The phrase in italics means

(i) Grandfather was the most distinguished member of the party.

(ii) Grandfather was the only sportsperson in the party.

(iii) Grandfather was the only successful member of the hunting party.

Answer: (iii) Grandfather was the only successful member of the hunting party.

(i) Toto climbed up the curtains when Timothy lost his temper.

(ii) When I came to live with my grandfather, I became one of the tiger’s favorites.

(iii) Timothy had clean habits, and would scrub his face with his paws exactly like a cat.

Question 1. Grandmother’s prophecy was that the tiger

(i) would prefer Mahmoud’s bed to sleep in.

(ii) and the cook would disappear together from the house.

(iii) would one day make a meal of Mahmoud.

Answer: (iii) would one day make a meal of Mahmoud.

Question 2. When Timothy was about six months old, a change came over him.

The phrase in italics means that

(i) Timothy had grown to his full size.

Question 3. Write ‘True’ or ‘False’ against each of the following statements.

(i) Timothy and Grandfather went to Lucknow in a special compartment. ______

(ii) The compartment in which Grandfather and Timothy travelled had no other passenger. ______

(iii) Timothy and Grandfather travelled in a first class compartment. ______

(vi) All passengers in the compartment thought that Timothy was a well-fed and civilized tiger. ______

Question 4. Grandfather suggested that Timothy should be put in another cage.

The reason was that

(i) the tiger had become very bad tempered.

(ii) a leopard in the next cage would constantly rush at Timothy.

(iii) the cage was too small for a full grown tiger.

Answer: (ii) a leopard in the next cage would constantly rush at Timothy.

Question 5. The tiger was still licking his arm, with increasing relish. The phrase in italics suggests that Timothy

(i) was good natured.

Question 1. Where was the tiger cub hiding when Grandfather found him?

Answer: The tiger cub was hiding in the roots of a banyan tree in the Tarai jungle near Dehra when Grandfather found him.

Question 2. (i) What did Toto do to entertain Timothy?

(ii) What did he do when Timothy lost his temper?

Answer: (i) Toto would pull Timothy by the tail to entertain him.

(ii) He would climb up the curtain when Timothy lost his temper.

Question 3. “I became one of the tiger’s favorites”. Who is ‘I’ in the statement? Why did he think so?

Answer: Timothy was most comfortable on the sofa during the day. In the night, he would sleep in the cook’s quarter.

Question 5. What was Grandmother’s prophecy about the cook? Did it come true?

Answer: Grandmother’s prophecy about the cook was that one day Timothy would eat him. No, it did not come true.

Question 6. What made Grandfather decide to transfer Timothy to the zoo?

Answer: Timothy had begun to be less friendly. He seemed to follow Mahmood with wrong intentions. He would eat birds. This made Grandfather decide to transfer Timothy to the zoo.

Question 7. Why did Grandfather want Timothy to be put in another enclosure?

Answer: Grandfather wanted Timothy to be put in another enclosure because a leopard in the neighbouring cave was bothering and frightening him.

Question 8. What shocked Grandfather in the end?

Answer: Grandfather was shocked to hear from the keeper that Timothy was dead two months ago and the tiger he was caressing was very dangerous.

Question 1. Shoot animals with a camera, not with a gun.

Answer: Poaching and hunting is a crime. It’s certain that not all animals can be made pets. But, that does not mean that the wild animals should be killed or shot. All the living beings balance the ecosystem. To kill animals for pleasure is cruel. Thus, shoot animals with a camera, know their life, but don’t shoot them with a gun.

Question 2. Keeping pets helps us become more loving and tolerant. It also helps us respect life in any form. Do you agree?

Answer: Yes, I do agree that keeping pets helps us become more loving and tolerant. When we have pets, we care for the animals more, we understand them better. It increases our tolerance of being around animals, as we are less fearful. It also helps us respect the various life forms. We get to know that every living being should be taken care of and loved.

Question 3. Have you heard of the Society for Prevention of Cruelty to Animals (SPCA)? What do they do?

Answer: Yes, I have heard of the Society for Prevention of Cruelty to Animals (SPCA). This is an organization that works towards the safeguarding of animals. It protects them from human’s cruel acts and poaching.

At BYJU’S, students will also be able to access the sample papers and previous year question papers along with solutions. It will boost revision of the entire syllabus and help them score good marks in the upcoming board exam.

Who is Timothy in Chapter 9 of NCERT Solutions for Class 7 English Supplementary?

Timothy is a tiny tiger cub which was found by the grandfather in the Terai jungle near Dehra. Timothy is bought up like a human child. He is playful and naughty. His companions are Toto, the monkey, a puppy and other members of the household.

What happened to Timothy as he grew older in Chapter 9 of NCERT Solutions for Class 7 English Supplementary?

As Timothy grew older and was about six months, he gradually became less friendly and rather dangerous. So, Grandfather decided to transfer him to a zoo in Lucknow.

When did grandfather visit the zoo to check on Timothy as mentioned in Chapter 9 of NCERT Solutions for Class 7 English Supplementary?

Six months after sending Timothy to the zoo, Grandfather visited the zoo to check how he was getting on. Timothy was happy to see grandfather as he approached the bars and allowed Grandfather to put both hands around his head. Grandfather further stroked his forehead and tickled his ears.