This chapter “The Selfish Giant” is about a Giant’s beautiful garden where children used to love playing. But one day, the selfish Giant built a high wall around his garden to prevent the children from entering it. Thereafter, neither the children nor the Spring or Summer entered the garden. Seeing this, the Giant had a change of heart and he started missing his little friends, especially a little boy whom he loved dearly. Soon enough, he opened up the garden for one and all and loved watching the children play in his beautiful garden.

Students of 8th Standard can check the English Supplementary textbook – It So Happened for NCERT Solutions as given below. All the textbook and additional exercise questions have been solved by experts in accordance with the updated CBSE English syllabus. To explore the other important subjects of NCERT Solutions of Class 8, students may also want to check the linked article and score good marks in their exams. 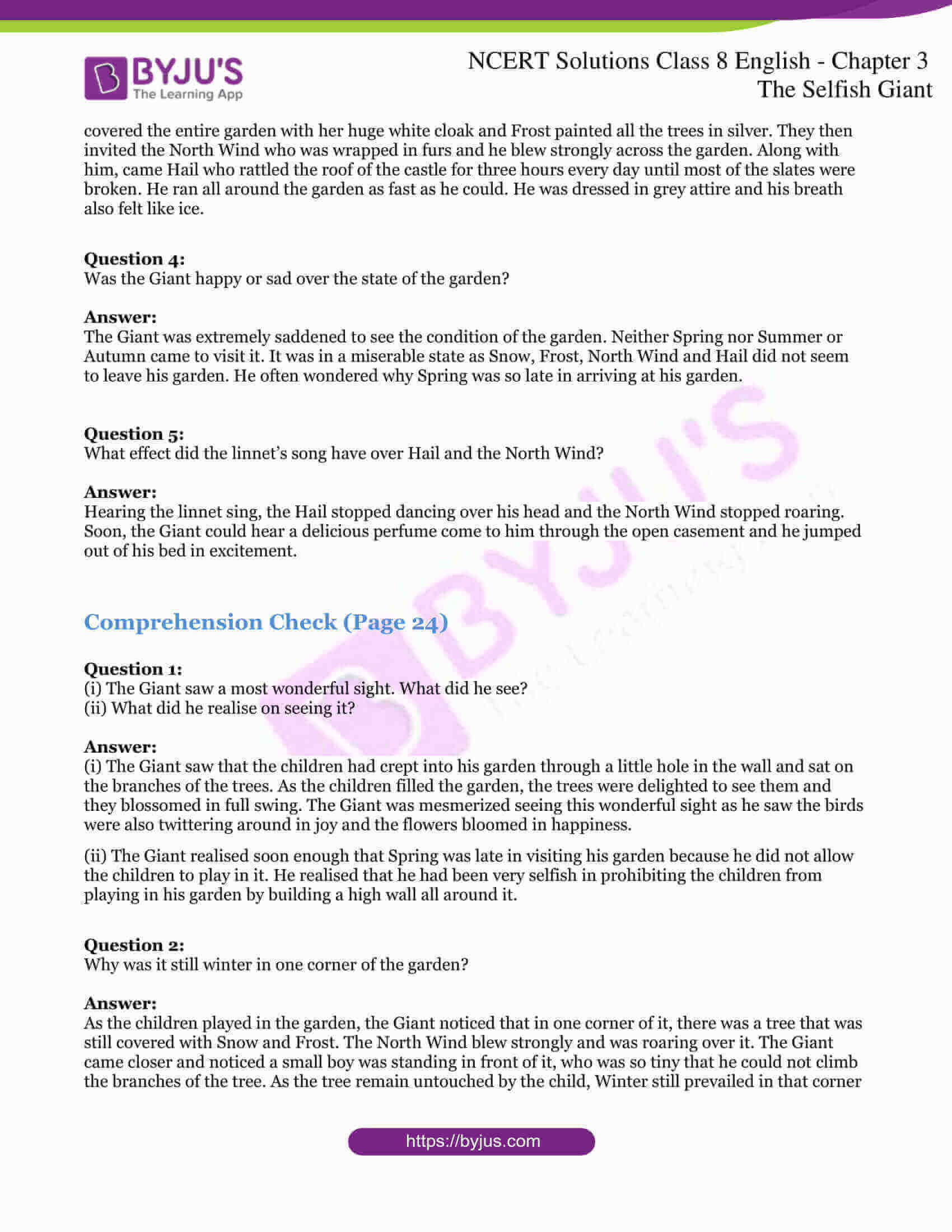 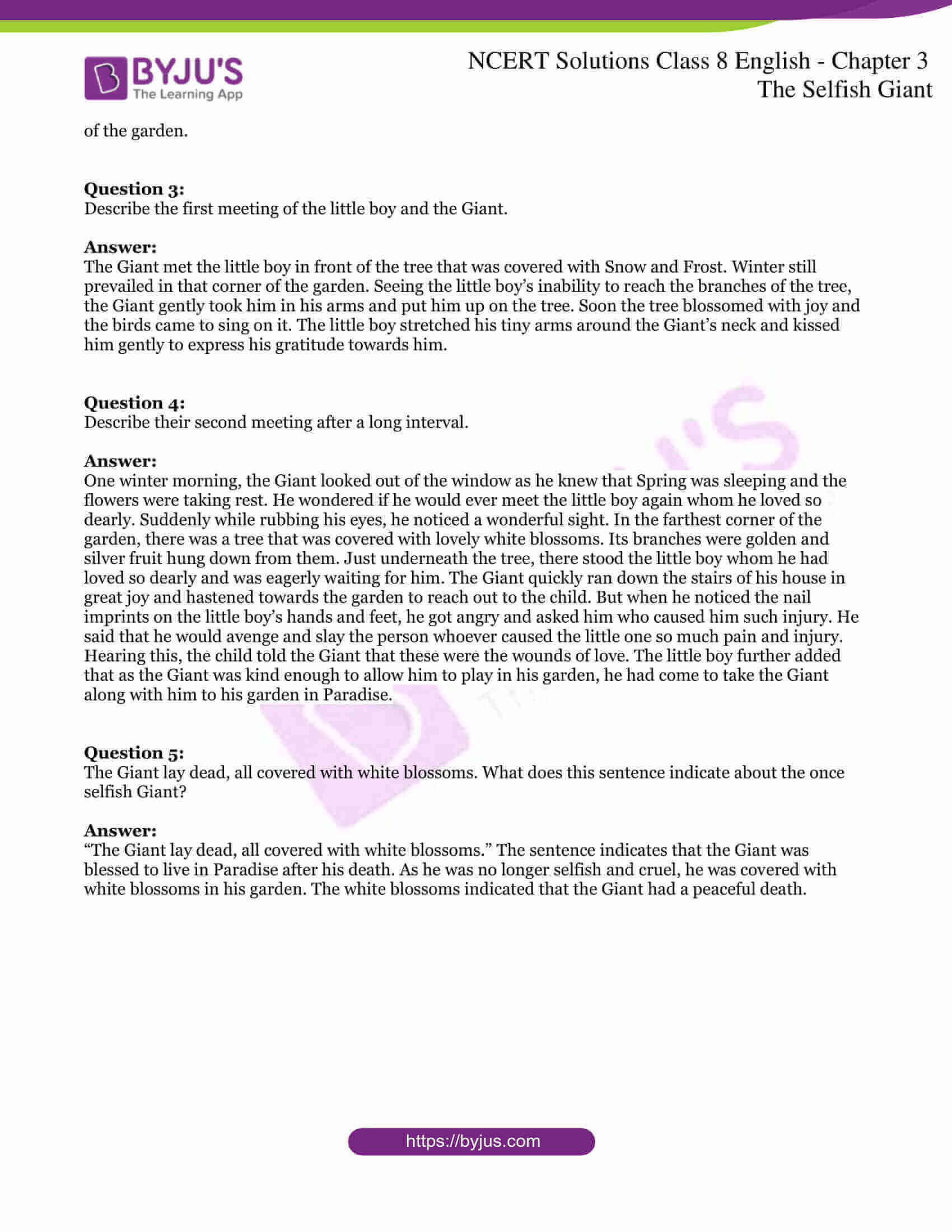 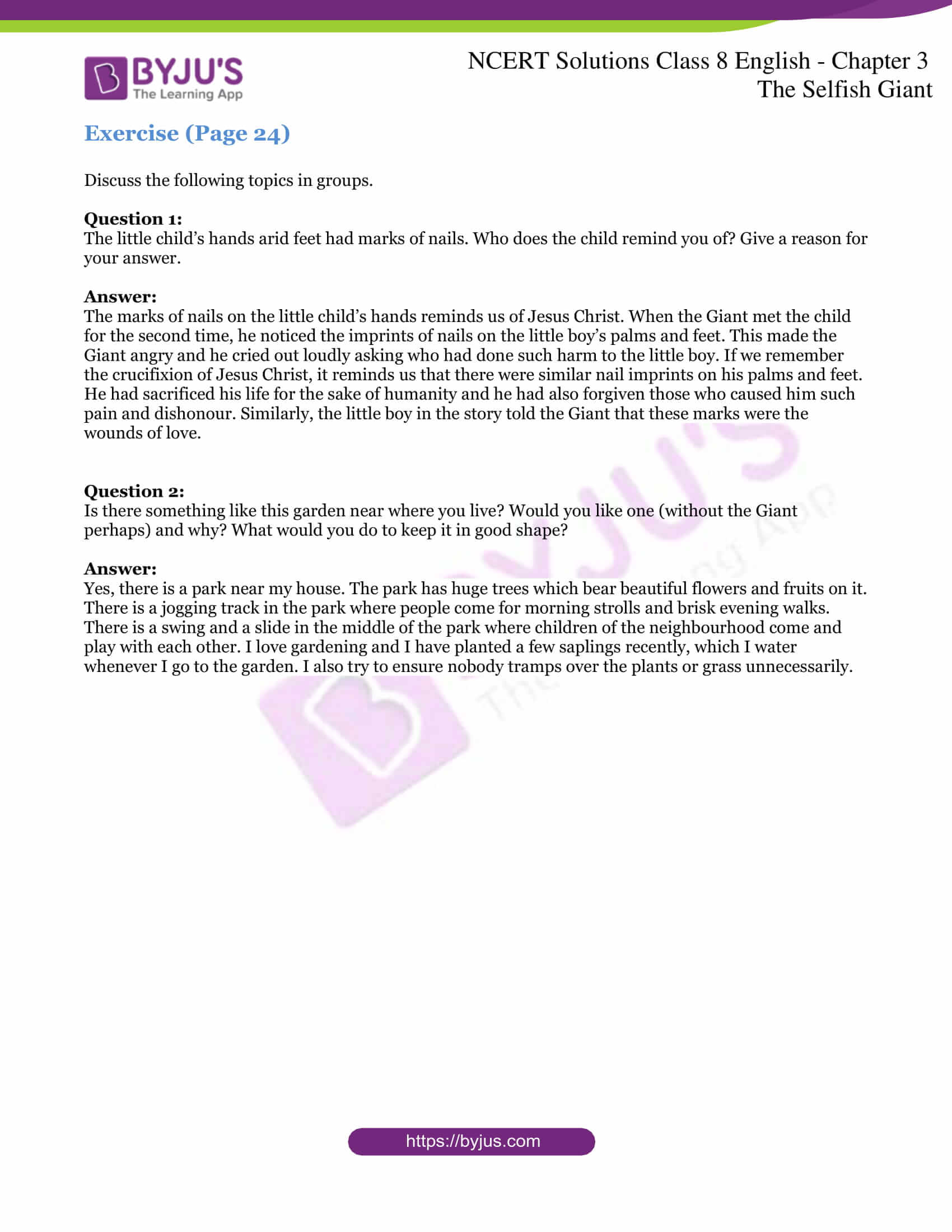 Why is the Giant called selfish?

The Giant is called selfish because he prohibited the children from playing in his garden. He built a high wall all around it and put up a notice-board in it stating that all trespassers will be prosecuted.

On one occasion the children said: “How happy we are here!”

Later they said: “How happy we were there!”

What are they referring to in both the cases?

In the first case, the children expressed their happiness while playing in the Giant’s garden. They would go to play in the garden after returning from school and had a wonderful time playing around the garden.

In the second instance, the children were referring to the Giant’s garden where they would go and play after returning from school. They talked with each other how they would enjoy playing around the garden where trees bore beautiful flowers and fruits and birds sang sweet songs. However, after the Giant stopped them by building a high wall around the garden, they could no longer enter it.

The children were referring to the Giant’s beautiful garden in both the cases.

(i) When spring came, it was still winter in the garden. What does winter stand for or indicate here?

(ii) Winter has been presented like a story with its own characters and their activities. Describe the story in your own words.

(i) When Spring came, it was still Winter in the garden. In the story, Winter denotes desolate and negative atmosphere where the trees and flowers never blossom. Winter is also used to indicate a gloomy and depressing environment which brings in sadness and laziness. In such cold weather, there is snow everywhere and cold winds blow all around where trees tend to droop and birds do not chirp. As the children were not playing in the Giant’s garden, Spring did not enter it. As a result, even the trees did not blossom and the birds did not sing sweet songs in the garden.

(ii) When Spring came all over the country, the trees started to blossom and the birds started to sing except the Giant’s garden, where winter had still prevailed. The birds did not sing and the trees forgot to blossom as the children did not come to play in the garden. One day, a beautiful flower blossomed from the grass but when it saw the notice-board, it felt sorry for the children and slipped back into the ground again. Seeing all this, Winter was pleased as there was Snow and Frost everywhere. Snow covered the entire garden with her huge white cloak and Frost painted all the trees in silver. They then invited the North Wind who was wrapped in furs and he blew strongly across the garden. Along with him, came Hail who rattled the roof of the castle for three hours every day until most of the slates were broken. He ran all around the garden as fast as he could. He was dressed in grey attire and his breath also felt like ice.

Was the Giant happy or sad over the state of the garden?

The Giant was extremely saddened to see the condition of the garden. Neither Spring nor Summer or Autumn came to visit it. It was in a miserable state as Snow, Frost, North Wind and Hail did not seem to leave his garden. He often wondered why Spring was so late in arriving at his garden.

What effect did the linnet’s song have over Hail and the North Wind?

Hearing the linnet sing, the Hail stopped dancing over his head and the North Wind stopped roaring. Soon, the Giant could hear a delicious perfume come to him through the open casement and he jumped out of his bed in excitement.

(i) The Giant saw a most wonderful sight. What did he see?

(ii) What did he realise on seeing it?

(i) The Giant saw that the children had crept into his garden through a little hole in the wall and sat on the branches of the trees. As the children filled the garden, the trees were delighted to see them and they blossomed in full swing. The Giant was mesmerized seeing this wonderful sight as he saw the birds were also twittering around in joy and the flowers bloomed in happiness.

(ii) The Giant realised soon enough that Spring was late in visiting his garden because he did not allow the children to play in it. He realised that he had been very selfish in prohibiting the children from playing in his garden by building a high wall all around it.

Why was it still winter in one corner of the garden?

As the children played in the garden, the Giant noticed that in one corner of it, there was a tree that was still covered with Snow and Frost. The North Wind blew strongly and was roaring over it. The Giant came closer and noticed a small boy was standing in front of it, who was so tiny that he could not climb the branches of the tree. As the tree remain untouched by the child, Winter still prevailed in that corner of the garden.

Describe the first meeting of the little boy and the Giant.

The Giant met the little boy in front of the tree that was covered with Snow and Frost. Winter still prevailed in that corner of the garden. Seeing the little boy’s inability to reach the branches of the tree, the Giant gently took him in his arms and put him up on the tree. Soon the tree blossomed with joy and the birds came to sing on it. The little boy stretched his tiny arms around the Giant’s neck and kissed him gently to express his gratitude towards him.

Describe their second meeting after a long interval.

One winter morning, the Giant looked out of the window as he knew that Spring was sleeping and the flowers were taking rest. He wondered if he would ever meet the little boy again whom he loved so dearly. Suddenly while rubbing his eyes, he noticed a wonderful sight. In the farthest corner of the garden, there was a tree that was covered with lovely white blossoms. Its branches were golden and silver fruit hung down from them. Just underneath the tree, there stood the little boy whom he had loved so dearly and was eagerly waiting for him. The Giant quickly ran down the stairs of his house in great joy and hastened towards the garden to reach out to the child. But when he noticed the nail imprints on the little boy’s hands and feet, he got angry and asked him who caused him such injury. He said that he would avenge and slay the person whoever caused the little one so much pain and injury. Hearing this, the child told the Giant that these were the wounds of love. The little boy further added that as the Giant was kind enough to allow him to play in his garden, he had come to take the Giant along with him to his garden in Paradise.

The Giant lay dead, all covered with white blossoms. What does this sentence indicate about the once selfish Giant?

The little child’s hands arid feet had marks of nails. Who does the child remind you of? Give a reason for your answer.

The marks of nails on the little child’s hands reminds us of Jesus Christ. When the Giant met the child for the second time, he noticed the imprints of nails on the little boy’s palms and feet. This made the Giant angry and he cried out loudly asking who had done such harm to the little boy. If we remember the crucifixion of Jesus Christ, it reminds us that there were similar nail imprints on his palms and feet. He had sacrificed his life for the sake of humanity and he had also forgiven those who caused him such pain and dishonour. Similarly, the little boy in the story told the Giant that these marks were the wounds of love.

Is there something like this garden near where you live? Would you like one (without the Giant perhaps) and why? What would you do to keep it in good shape?

Yes, there is a park near my house. The park has huge trees which bear beautiful flowers and fruits on it. There is a jogging track in the park where people come for morning strolls and brisk evening walks. There is a swing and a slide in the middle of the park where children of the neighbourhood come and play with each other. I love gardening and I have planted a few saplings recently, which I water whenever I go to the garden. I also try to ensure nobody tramps over the plants or grass unnecessarily.